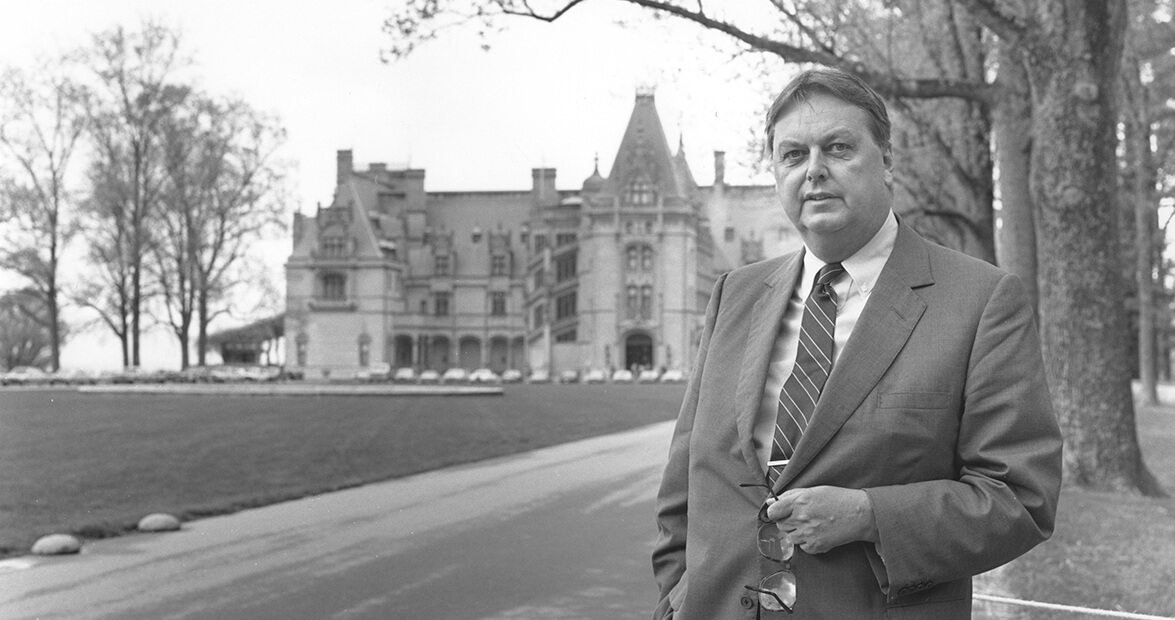 In the 1950s, William Amherst Vanderbilt Cecil boarded an airplane in Charlotte for a flight that would change his life. A junior officer at Chase National Bank (later Chase Manhattan), Cecil had traveled from New York to Asheville to visit the family homestead, an 8,000-acre dairy farm and country estate.

Biltmore House in those days was not the attraction that it is today. Opened for tourism at the city and county’s request in 1930, the 250-room French Renaissance chateau was losing $250,000 a year by 1960, a serious financial drain that had to be subsidized by the profitable dairy farm.

Inside, the house was in disrepair — there were no funds to preserve and restore the home that was completed in 1895. The business itself, bleeding red ink, appeared to be coming to collapse. The young Cecil had returned simply to “see what could be done about the old family homestead.”

He left Asheville ambivalent about whether to give up his day job to commit to such a project. His ambivalence diminished, however, once he boarded that airplane in Charlotte. On the flight to New York, Cecil ran into a friend and senior officer at Chase National Bank, David Rockefeller, who had been in Charlotte to open a new shopping center.

“What are you going to do with that white elephant at Biltmore?” Rockefeller asked.

“I’m going to turn it into a black elephant,” Cecil replied.

Had it not been for a flood that swelled Asheville’s Swannanoa River, William Cecil would have been born in a hospital delivery room. But as the river was spilling over its banks, prohibiting transit across to the hospital, Cecil was born in 1928 in his mother’s bed on the country estate that had belonged to his maternal grandfather, George Washington Vanderbilt.

On his father’s side, the infant descended from William Cecil, Lord Burghley, the lord high treasurer to Queen Elizabeth I. Lord Burghley’s lineage joined with the Vanderbilts in 1924, when his heir, John Francis Amherst Cecil, married the only child of George Washington Vanderbilt and Edith Stuyvesant Dresser, Cornelia, born in 1900.

As toddlers, young Bill and his brother George, three years older, played inside the towering house, sliding down the banisters and romping about the rooms. The young boys thought nothing unusual about their house until 1930.

That year, the Cecils opened Biltmore House to the public at the request of Asheville and Buncombe County officials eager to boost local employment through tourism. The family lived in a suite of rooms at the north end of the house. With only about 1,000 visitors a year, the boys and their parents hardly noticed the tourists. “The tours were self-guided,’ Cecil says. “The guards stationed at the various points would answer questions — if they were awake.”

Evenings, the family moved to the sitting parlor, now the Billiard Room. Before retiring for the night, they had to spruce up the room for visitors the next day.

When he turned four, Cecil’s parents divorced. The estate eventually was put in a trust for Cecil and his brother, who crossed the Atlantic to attend school in England. After a few years in England, the boys traveled by train to Switzerland to attend school there. The year was 1936. World War II was beginning to brew.

The war was boiling in 1943. Cecil and his brother left Switzerland through France and Spain, eventually reaching Portugal In Lisbon, the were to board a plane for London but were bumped for a VIP. “The rumor was that it was Churchill,” Cecil says.

Later that night, German warships shot down the plane. It had not Churchill on board but Gone with the Wind actor Leslie Howard (who played Ashley Wilkes). “That was his end, which was unfortunate,” says Cecil, acutely aware of his own good fortune of having missed that plane.

The two boys boarded a seaplane destined for London. To avoid being targeted by German warships, their plane made a wide arc beyond the coast of Europe. “It seems that we went nearly to the coast of America, well out of reach of the German, and ended up in England,” he says.

In England, Cecil finished his schooling, and at age 17, he joined the British Navy as a signalman just a few days before World War ll’s end. He left England in 1949, coming back to America to matriculate at Harvard, graduating a year ahead of his class in 1952. The young Harvard graduate joined Chase National Bank in New York, rising in the ranks to become an officer in the foreign department. When a vacancy opened at the bank’s Washington branch, Cecil moved his wife, whom he had married in 1957, and baby boy to the nation’s capital for the next three years. “It was an interesting period of time, but not my cup of tea,” Cecil says in his English accent. “There was too much partying and not enough banking. It was more of a diplomatic show-the-flag sort of thing.” He moved back to New York.

Being eager and in his early 30s, Cecil wanted the challenge of hard work. Biltmore presented the challenge. The estate’s president, who had been handpicked by Cecil’s grandmother, George Vanderbilt’s widow, was getting on in years and was being forced into retirement, so Cecil moved his family to Asheville to begin the process of resurrecting his home.

“I thought it would be interesting to be at Biltmore,” Cecil says. “So I came down to look at what could be done. I left figuring that I could do something with it.”

At first, he wore all caps — manager, promoter, even ticket salesman. “The work was so diverse,” he says. “If I tired of doing one thing, I could go do another.”

He demonstrated a keen instinct for publicizing Biltmore. When the publisher of The Asheville Citizen refused to buy staff photographers special lenses to capture an eclipse, Cecil took pictures with his camera and gave them to the paper free of charge. “Of course, I had the silhouette of Biltmore right underneath the eclipse,” Cecil says with a laugh.

Cecil also used newspapers as direct marketing vehicles. An eight-page insert in eight Southern metropolitan papers generated better-than-average response. The catch: an offer to obtain a free recipe of a dish served at Biltmore in 1901. “It became so popular that we later decided we would sell the recipes for a quarter each,” Cecil says. People from all over sent in a quarter and a self-addressed, stamped envelope in exchange for a turn-of-the-century recipe.

Revenue of any sort was all important. Cecil experimented with raising mushrooms and salad tomatoes. “We did anything that we could,” he says. “Even landscaping for outsiders. We couldn’t afford a full-time landscaping crew, so we tried to fill in their time doing work off the estate.”

Increasingly, however, Cecil began to focus his efforts on tourism. In 1968, eight years after his arrival at Biltmore, the house realized a meager profit of $16.34. Cecil was elated. “It made my day,” he says. “It certainly was better than losing a half-million dollars.”

Today, of course, Biltmore is one of the great marvels of the western North Carolina mountains — thanks to Bill Cecil. For three and a half decades, he relentlessly poured his energy into the “old family homestead,” putting Biltmore on the map for tourists worldwide.

Admission to Biltmore, $2.50 in the early 1960s, approached $35 at the end of the millennium. Today’s visitors, however, have much more to see. “When it was $2.50, you got to see the ground floor, the gardens, the greenhouse, and the dairy barn, and that was about it,” Cecil says. Now, nearly all but the servants’ rooms are open to the public, and for an additional fee, guests may even tour those on the “Behind-the-Scenes” tour.

One of Cecil’s proudest accomplishments is the winery. Built in 1985, the winery completed Vanderbilt’s vision of the self sustaining estate. “We looked around and asked what was missing,” Cecil says. “There was the house, the river down below. There were the fields and everything else, so why not a vineyard? A proper French chateau has a vineyard.” Moreover, annual sales of 90,000 cases of wine uncork additional profitability.

But infusing Biltmore with additional revenue sources was solely motivated by a desire to profit. Rather, it was the other way around:  The desire to make more money was motivated by the desire to preserve. Driven by aspirations to maintain the family home, Cecil talks of the European sense of home, of how in the Old Country, families hold onto their homes, while Americans tend to give up their when better jobs or better lifestyles present themselves.

Cecil retired from Biltmore in 1995, the centennial year of the house’s opening. He left the business in the care of his son, Bill Jr., now CEO and president. It took the elder Cecil 10 years to prepare his successor. Cecil’s daughter, Diana “Dini” Pickering, serves as chairman of the board of directors.

Since retirement, Cecil is hands-off. He claims chat Biltmore does not miss him. New employees no longer know the man who was known on the estate simply as “Mr. C.” “I don’t miss the day-to-day work,” says Cecil, his face youthful-looking despite his gray hair. “I have a good relationship with the senior staff. We get together once a month and they tell me half the truth. They know perfectly well if they’re in a bind and they need senior counsel they can come to me.”

These days you’ll find him in his own home, not far from the estate. He remains always a man of the house.