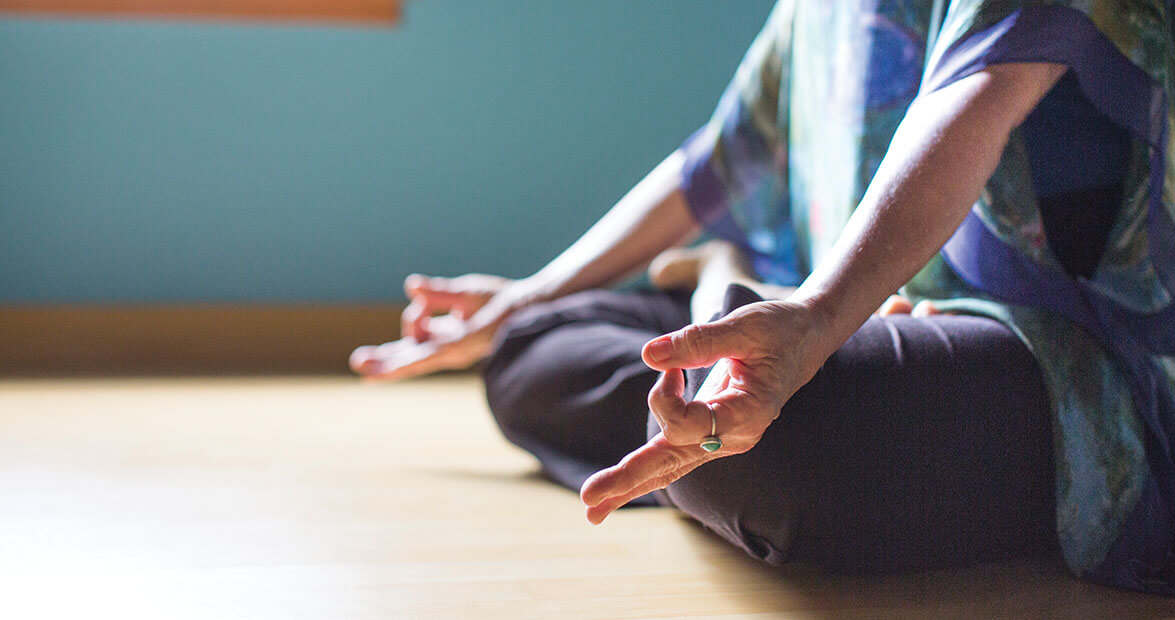 When I signed up for yoga, I didn’t plan on learning Sanskrit, or any other language. I didn’t plan on sitting cross-legged in so-called “easy pose” on the floor of a high-ceilinged studio called “the Water Room,” chanting Om in unison with 30 strangers. I didn’t plan on downloading hours of “vibrational healing” music, the chiming, clanging, and reverberations of quartz crystal bowls tuned to particular keys said to correspond to individual chakras (areas of the body through which life energy flows freely and healthfully, or doesn’t). I certainly didn’t plan on listening to someone play the harmonium while I lay on the floor pretending to be a corpse.

When I signed up for yoga, I was just looking for a decent workout.

I would never even have started doing yoga if the YMCA pool hadn’t burned down. (How can a pool burn down? That is exactly the kind of Zen question we yogis embrace, and you literal-minded, “rational” people resist.) Swimming kept my mind calm and body in reasonably good shape, staving off the normal aches of anyone older than 35 and the particular residual pain from cancer surgery I’d had years prior. Before the YMCA fire, I swam early mornings alongside a water aerobics class called Happy Hinges, for people with arthritis. We regulars all knew each other, and the plastic lane divider separating us felt symbolic — I’d be on the other side of that line soon enough. I loved swimming’s meditative repetition, the regulation of my breath, the sensory isolation of goggles and earplugs and being underwater, in a group and yet alone. I’d never much enjoyed team sports — I preferred competing with myself — and found it hard to relax in general, let alone in a noisy, crowded gym.

I didn’t know it yet, of course, but everything I loved about swimming (except maybe the water) also described yoga. 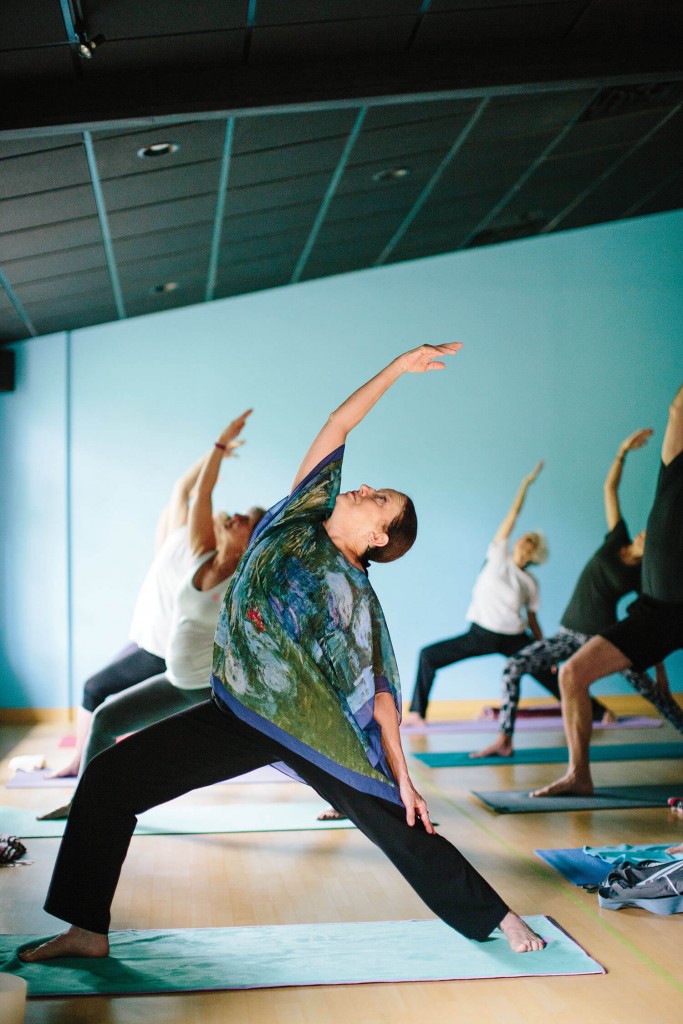 Before becoming a yoga instructor, Donna Gardner got a master’s degree in dance. At the Wilmington Yoga Center, she leads students in poses like “reverse warrior.” photograph by Millie Holloman

Indoor pools are scarce in the beach town of Wilmington, so while I waited through winter for the Y to reopen, I joined the Wilmington Yoga Center. I chose the center for its size — at 5,000 square feet, and with more than 100 classes each week, it bills itself as the largest yoga center in the Southeast — and its unassuming location in a strip mall on a busy thoroughfare, with lots of well-landscaped trees and not much signage. It all suggested just the sort of anonymity I craved, the opposite of some weird little commune. Also, it seemed that everyone I knew had taken classes there at one time or another and raved on annoyingly about how yoga transformed their lives and “worked its magic” on them. I didn’t know how yoga changed their lives, because when people start talking that way, I tend to lose consciousness. Anyhow, I didn’t want my life to change. I just needed a place to exercise.

The first class I attempted was the early-morning Core Power Hour, open to all levels, where, it turned out, I could do exactly none of the lunging, squatting, and weight-lifting demonstrated by the young, gorgeous instructor. Apparently, in terms of ability, I fell below “all levels.” Humbled, I next tried “Gentle & Meditation,” taught by an older woman with a long braid and flowing, colorful clothing — more like the hippie yoga I remembered from the 1970s. This instructor, Donna, had a master’s degree in dance and had been practicing yoga and meditation for more than 20 years, which reassured me. In her class, I could hold most of the poses — asanas, in Sanskrit — though I noticed that almost every single thing she said, in her lovely, musical voice, contradicted every single other thing. “This is the gentle class,” she said, “although it can get a little strenuous.” She told us not to worry about perfection, then a moment later told a student his form was perfect. She urged us to try more challenging poses, but then added, “You can live a happy, fulfilling life without ever doing a handstand.” Also, during savasana — Sanskrit for “corpse pose,” the traditional ending pose in any yoga routine — Donna moved around the room, lightly and quickly stroking our shins, which I found alarming. My plan to remain invisible had clearly failed.

I next tried the same class with a different teacher, whose businesslike coaching included a numbered list of alternatives for each pose (option two, option three), as if she were narrating a PowerPoint presentation. I liked her direct approach — no touchy-feely hippie here, I thought. But then, during savasana, she sang a lengthy mantra, accompanying herself on a harmonium, a small pump organ housed in a wooden carrying case. Her singing was exquisite, the music loud and beautiful, and, like any great performance, fully commanded my attention. I texted a friend: Is it normal for the teacher to play harmonium during corpse time? My friend wrote back: Yes! Omg, she sang at my wedding, don’t you love her voice?

Undeterred, I resolved to try more teachers, different classes — surely I’d find the perfect fit for my body’s particular set of challenges. (A month earlier, I’d have called these “limitations,” but I was learning to follow ahimsa, the yogic ideal of non-violence, including nonviolent communication.)

What happened next I still don’t understand. Suddenly, it was a month later and I was attending every class taught by Donna, the older woman with the braid. I certainly wasn’t looking for a guru, nor did I know that the literal Sanskrit meaning of guru is not “creepy cult leader,” as I might have imagined, but, rather, “dispeller of darkness.” Donna’s students varied wildly in size, age, shape, and abilities; like any great teacher, she seemed to see us individually, noting how we were progressing, and knowing exactly what suggestions or encouragement we might need on any given day. The 75 minutes of her class flew by as I moved from sitting to standing to lying down, all while keeping track of my breathing and alignment, and making miniscule adjustments to my posture — a perfect fit for my hyper brain, keeping it so busy with small tasks that, in spite of myself, I relaxed.

In the months that followed, I noticed that “easy pose” no longer hurt my hips. In photos, my shoulders looked more defined. I felt less impatient in Wilmington traffic, and less terrified on airplanes. For the first time in my 40-plus years on earth, friends told me that I seemed calm. The affirmations Donna recited floated through my brain: I’m aware of my body, I breathe in; befriending my body, I breathe out. My mind is calm, my body is strong and flexible, my spirit is filled with love and wisdom, all in equal measure. The deep ringing of the quartz bowls Donna played during savasana resonated on some level of my being that I hadn’t known existed, and I felt inspired by the readings she shared — passages and poems by Pema Chödrön, John O’Donohue, Mary Oliver. (For some reason, all yoga teachers adore Mary Oliver.)

Something else was happening, too: I was beginning to feel less desire for invisibility, more connection to others. At the start of every class, Donna led us in silently sending metta — loving-kindness — to all who might need it, not only in our own lives, but in our community and the world. When we chanted the ancient mantra Om mani padme hum, we weren’t invoking any religious deity, Donna explained, but, simply, “putting our energy behind the vision that humanity can evolve to create a world based more on cooperation and compassion than competition and aggression.”

This nondenominational commitment to improving the world is, in fact, a founding tenet of the Wilmington Yoga Center, not only in theory, but also in practice. The center is known for its Kunga programs — charitable donations and service journeys, most notably to Homes of Hope, an orphanage in India. Also, its yoga teacher trainings include hours of service at local organizations — Wilmington’s domestic violence and homeless shelters, Boys & Girls Clubs, veterans’ groups. All of this underscores that yoga isn’t just a workout, but a reaffirmation of one’s membership in the global community: permanent, no matter how anonymous one might wish to be.

When the YMCA reopened, I joyously returned to the pool. But now, nearly a year after the fortuitous fire that changed my life, yoga is a central part of my daily routine, as necessary as eating or sleeping, as mysteriously uplifting as music or prayer.

And that is the most I’ll say about how yoga worked its magic in my life.