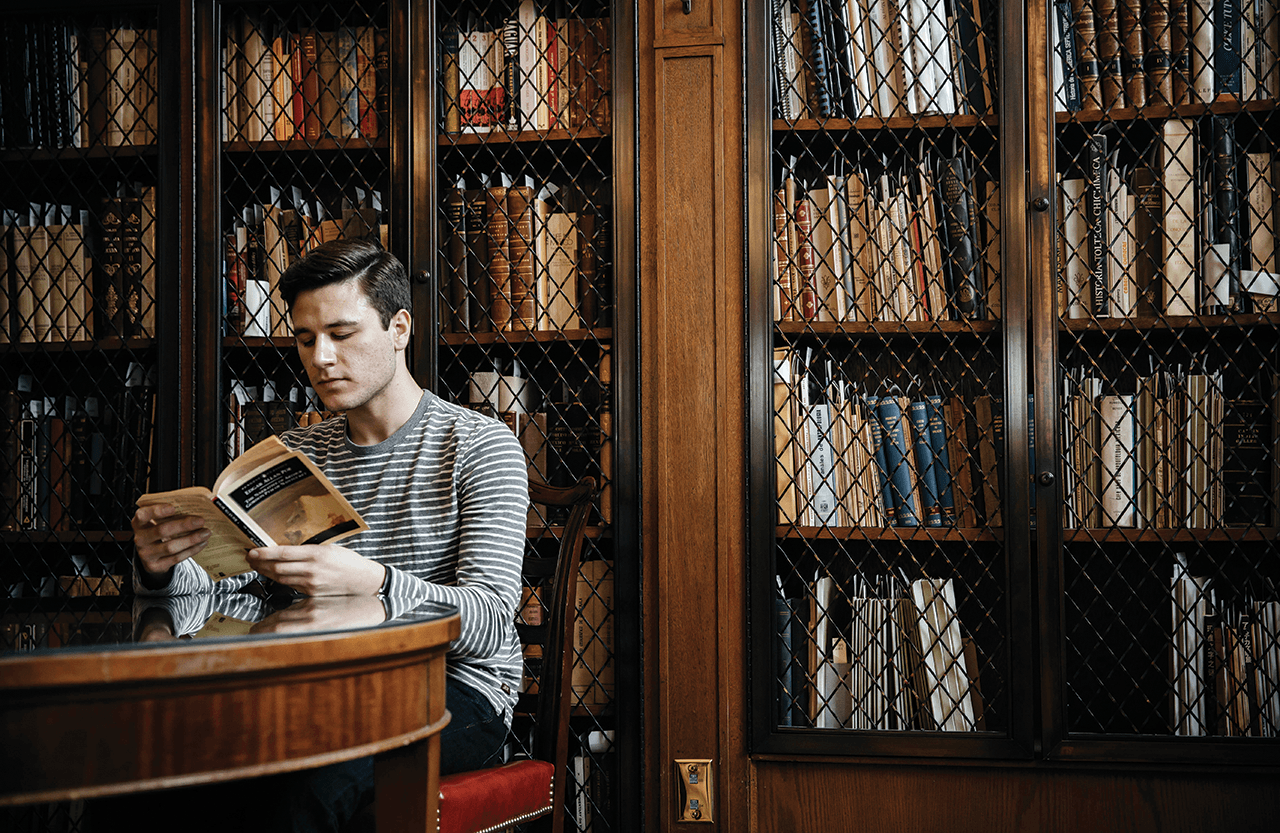 I gave it to my students on a platter, the answer to the dreaded college entrance Common Application essay question: Where are you most content?

Finally. Nothing about objectives or community service. At last a topic with an answer so obvious, so eminently writable. Where else but a library offers more contentment, or more closely mirrors Webster’s definition of a “state of peaceful happiness”? Here are towering, organized shelves, row upon row of protective guardians. Here are thousands of volumes telling millions of stories, bound snugly around you. Beyond the books themselves, here’s the faint rustle of newspaper and magazine pages, the unhurried movement of a librarian. And over it all, a somehow reverent atmosphere of silence.

Nobody bit. They wrote about soccer. And community service.

I’ve never not loved a library. Few places make me happier, more serene, and feel as safe and sacred to me as a library. Remember those children who ran away and lived at the Metropolitan Museum of Art in From the Mixed-Up Files of Mrs. Basil E. Frankweiler? I could do that, in a library. Whenever I’d visit my New York agent and arrive at 8:30 in the morning, I’d go to the New York Public Library, the only place in the city that didn’t frighten me. Even the pretzel-sellers scared me, and I was starving. But there, with those marble lions, that reading room, was a library: a refuge for the country mouse.

You could live in the Louis Round Wilson Library at the University of North Carolina at Chapel Hill. Not in the entrance foyer, of course, which you should visit if you want to feel like Harry Potter arriving at Hogwarts. The high, hallowed, arching walls with a slightly sepulchral feel exude an essence of erudition. Portraits line the walls. A wide staircase leads to a wood-paneled room with softly lighted display cases of literary rarities. Wilson Library’s North Carolina Collection — the largest collection about a single state in the country — contains every book ever written about North Carolina, or authored by a North Carolinian. I know, because years ago — mortifying library confession No. 1 — I checked on mine. 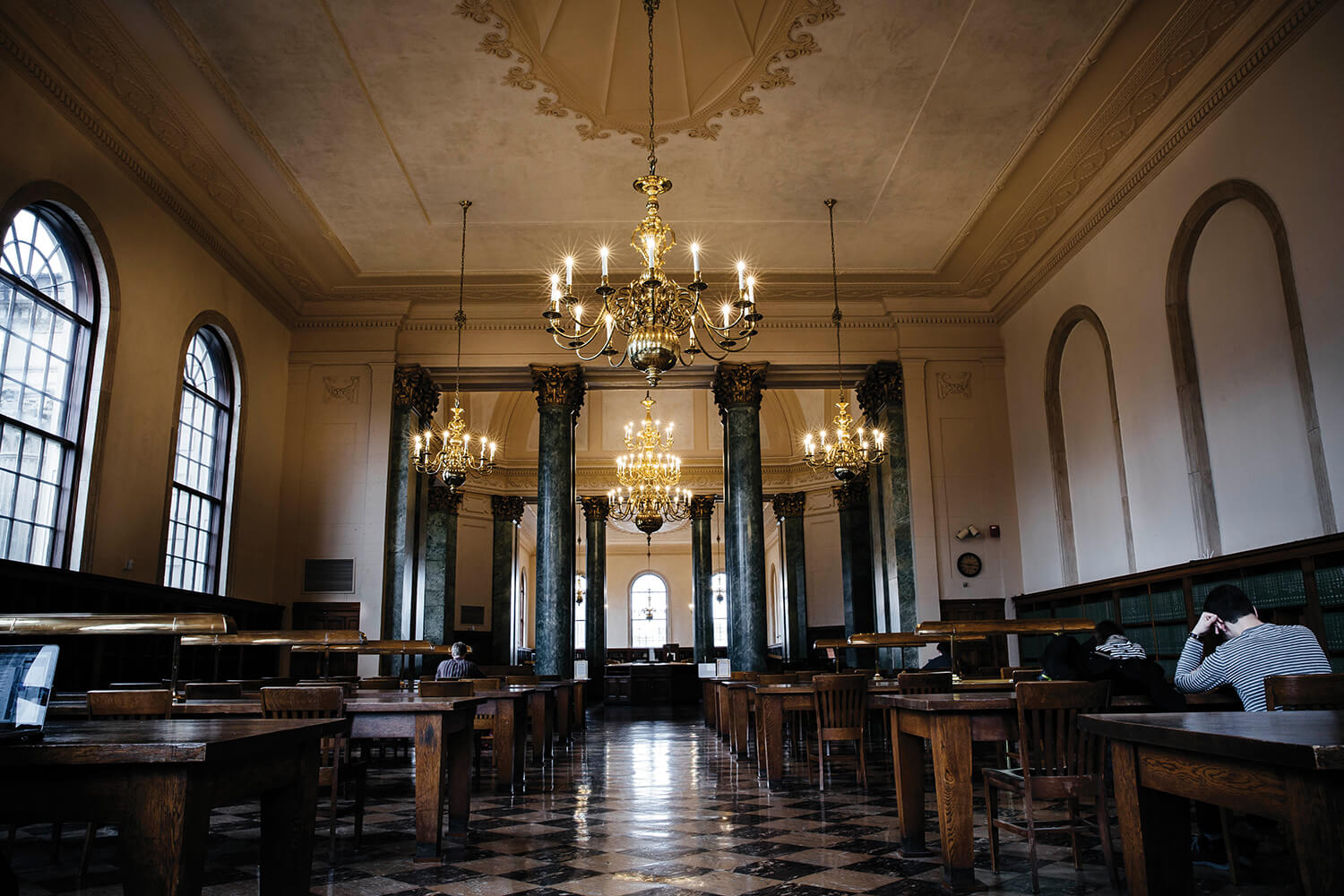 Built in 1929, Wilson Library was named after UNC librarian Louis Round Wilson, and it served as the university’s main library from 1929 until 1984. In the ’70s, we just called it “the graduate library.” I spent most of my library time — especially one lengthy afternoon lying in the narrow aisle between shelves, skimming 300 pages of Tennyson’s Idylls of the King for eight romantic lines I wanted to copy for my boyfriend (mortifying library confession No. 2) — in the social watering hole of the undergrad library, which no one referred to by its name, House. That is, until the afternoon I wandered into Wilson and located “the stacks.” The stacks had carrels. God, I love a carrel. I never went back to the undergrad.

Grand or humble, a library is deeply comforting. No one expects you to be anything in a library — clever, enthusiastic, social, athletic — except quiet. There’s comfort in being surrounded by shelf after nonjudgmental shelf of tended, orderly book spines. And never underestimate the comfort of consistency. In a library, you always know where you are, and how to find something. Go into any library anywhere in the state, and what you seek is organized under a process as simple and accessible as the alphabet. To test this assertion, I walked past the rose garden and curving two-story staircases and into the Georgian-style building that houses the other Wilson library —  Wilson County Public Library. Inside was the expected, blessed silence, the children’s books, the periodicals, the Dewey Decimal System of nonfiction — no doubt as was so in 1939, the year the library was constructed. Upstairs, I expected Marian the Librarian to appear any moment in the pale mint green, high-ceilinged room divided by six beautiful arched openings. A librarian with a very, very long braid, wound and pierced with what looked like knitting needles, was behind the desk. Pretty close.

Should the system fail, there’s always this librarian, with his or her knowing, but not superior, efficiency. A no-nonsense, but not belittling, sort, librarians know everything, and not just about the library. They find nothing peculiar in peculiar questions like “What’s the life span of a robin?” and “When was plastic invented?” I know. Because I’ve called and asked.

When my children were very small, I hired a babysitter and went … to the library, a haven from parentland. When they were older, we were regulars at the modest little library on Church Street in Greensboro, whose closing I mourned. The branch had a display box for borrower’s collections — old letters, porcelains — and I took my collection of miniature Steiff animals to share (mortifying library confession No. 3). During summer vacations, I’d promise the children One Fun Thing per day: an ice cream cone. A trip to the pool. A visit to the library. (The library didn’t register on their fun meter, but it did on mine.) I’ve been known to vacate family vacations to find a library, a one-room refuge at Lake Waccamaw, or the leather-furnished library inside Eseeola Lodge. It doesn’t get much cozier than a single room in a hardwood-beamed, -walled, and -floored lodge that’s been around for a few generations. These spaces feel like my home library, where the John Updikes and Alice McDermotts fight for space with my husband’s history and religious tomes that we, in my family, refer to as sleeping pills.

Nothing could ever go very wrong in a library. Be reassured that if you go looking for the beloved, remembered written words that first enthralled or excited you, they’ll be there. You can find the childlike solace of Christopher Robin (silly old bear) or the portentous menace of Jane Smiley’s opening to A Thousand Acres. Libraries are YouTube for the mind, where, instead of searching for the Beatles’ appearance on “The Ed Sullivan Show,” you can, on a whim, locate the lines in Our Town, describing the address on an envelope, that left you smitten, just the way Thornton Wilder wrote them: “Grover’s Corners; Sutton County; New Hampshire; United States of America; Continent of North America; Western Hemisphere; the Earth; the Solar System; the Universe; the Mind of God.”

There they are, abiding, immutable. And best of all, available for check-out.