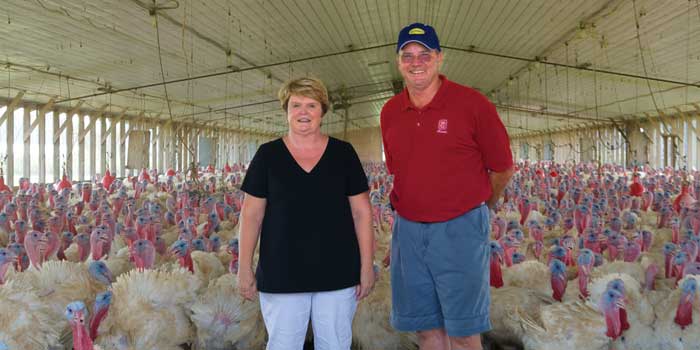 It started with a simple question: “Would you be interested in raising the White House turkey?”

“Well, yes, of course we would,” Debbie Worley told the National Turkey Federation president without hesitation. She and her husband, Bryant, were an obvious choice for one of the greatest honors in the industry — to raise the turkey destined to journey to the White House and meet the president.

On 1,200 acres of land in Princeton, the Worleys farm corn, soybeans, wheat, and cotton, in addition to raising turkeys and hogs. The 58-year-old couple rely on help from the family. Their sons-in-law, Ben and Kelvin, run the tobacco operation, and their six young grandchildren love to explore the fields and livestock houses.

That focus on family separates the Worleys from larger, factory-style farms and contributed to their White House trip in 2009.

“I think our grandchildren were one of the reasons we were chosen,” Debbie says.

The National Turkey Federation, the organization in charge of choosing the lucky grower, looks for a family farm where turkeys grow up around people. No one wants to take the chance that the bird will bite the president or cause a ruckus in the Rose Garden. Of approximately 125 growers considered in 2009, Walter Pelletier — then president of the federation — chose the Worleys, who grow turkeys for Butterball, a North Carolina company. Pelletier knew that the whole Worley family lives on the farm and that in no time, those grandchildren would have that turkey used to people.

He asked the Worleys to raise two birds for Thanksgiving — the only turkeys of the year to receive official pardons from the president, skip the platter, and live out their lives in Disneyland fat, dumb, and happy.

After more than three months of dedicated care and training, Bryant and Debbie and their daughters and sons-in-law took the two turkeys to Washington, D.C., where “Courage” and “Carolina” received their official pardons.

Before the ceremony, Disney, which sponsored the 2009 pardons, put the turkeys up for the night at the luxurious Willard Hotel, in a room lined with shavings.

“At $1,300 a night, Disney bought them a room,” Debbie says. “I’ve never stayed anywhere that there was a comma in the price, but that’s what it said on the back of the door.”

Eye for the future

Despite the White House hubbub, Bryant and Debbie Worley are in the business of selling turkeys and more for the community to actually eat. And they make sure they produce a quality product with their family, its future, and the future of the land in mind.

“It’s a family tradition for us to be conservationists,” Bryant says.

Bryant’s great-grandfather farmed the same land the Worleys work today, and in the 1940s, he developed a conservation plan that included experiments with kudzu. Following his lead, Bryant and Debbie make an effort to stay current with farming techniques and often receive praise for their innovations.

“We’ve adopted a lot of practices to promote clean water and to save the soil for the next generation,” Bryant says. “We won’t be in business much longer if we don’t protect our environment.”

The Worleys work on the land and for the land — not only to secure an income, but also to ensure that their six grandchildren and their grandchildren’s children have a place to work and enjoy living. And they have fun along the way: raising birds to meet the president, taking the grandchildren for a walk by the stream, and making sure you have a turkey as the centerpiece of your holiday meal.

Taylor Rankin is a senior journalism major at the University of North Carolina at Chapel Hill. She was an intern at Our State magazine during summer 2011.