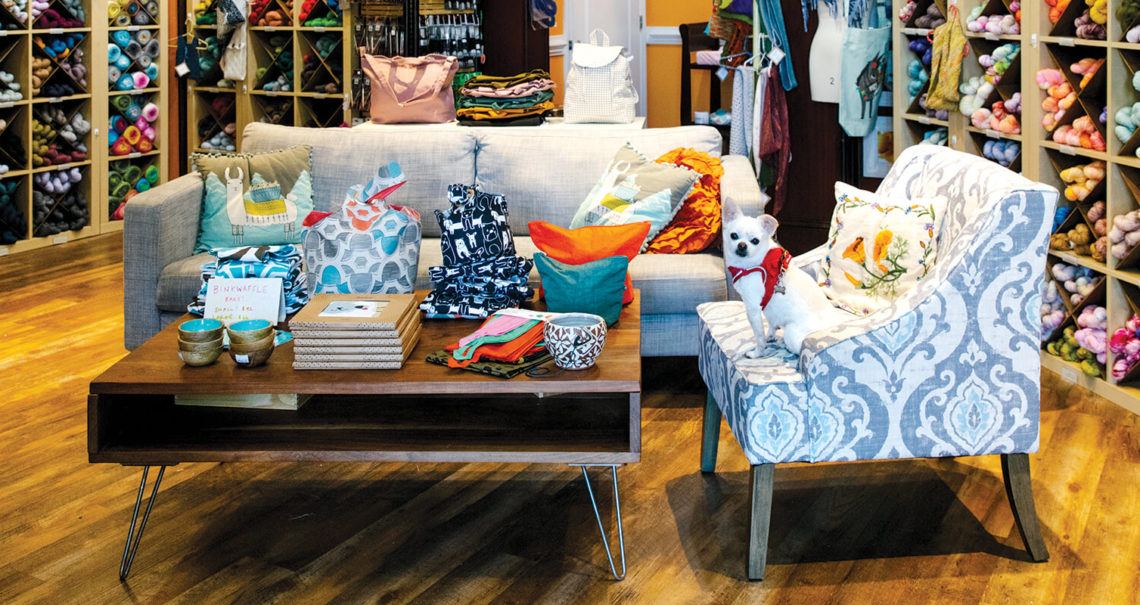 I swore that I’d followed the instructions for my three-color asymmetric scarf, the first one I’d ever knitted. But no matter what I did, I had more stitches on my needle than the pattern said I should. After years of limiting my knitting to rectangular throws and conventional scarves that ran in nice, regular rows, I had jumped into a piece with colors going sideways — much like my mood as I counted the purple, peach, and gray loops yet again.

Before steam started coming out of my ears, it was time for me to spend a little time on the couch. Not the psychiatrist’s — my favorite yarn shop’s.

Every shop worth its needles offers a place to sit and knit, ranging from a few chairs to a worn yet comfy sofa or two. But the seating is more than simply furniture for the shop’s dog or cat to nap on. It’s where knitters announce new grandbabies, bemoan spousal behavior, or beg for help. (I beg for help a lot.) Someone is always there to smile at photos of newborns or to say that their significant other does the same thing. And, always, to untangle the snarls. Sometimes there’s a party going on, literally. My favorite shop, Warm ’N Fuzzy in Cary, is so beloved that customers were invited to a baby shower for the owner inside the store, with gifts stacked high in front of the racks of yarn, the cushy gray couch crammed with happy people eating cake.

The couch is a powerful symbol, because yarn shops aren’t the sorts of places where you hand over money, grab your bag, and leave. They craft communities along with sweaters and mittens.

Creating items for a cause is woven into them, and most stores have at least one group project going. It might be making “port pillows,” as they often do at Charlotte Yarn, to cushion the spots where cancer patients receive chemotherapy. Or “knitted knockers” for mastectomy prostheses at Cheers to Ewe! in Huntersville. After Hurricane Dorian hit the Outer Banks, Knitting Addiction in Kitty Hawk had a midnight blue, tangerine, and cream-colored yarn called Silver Lake Sunset specially dyed, with proceeds benefiting rebuilding efforts on Ocracoke Island.

All of it for charity and a sense of purpose. Together.

The history of groups banding together to knit for a cause goes at least as far back as World War I, when women were urged to form clubs and “knit for victory” to make hats, socks, and scarves for soldiers and injured servicemen. In 1941, Eleanor Roosevelt launched the Knit for Defense effort, encouraging knitters to help the World War II effort by making items for military members.

More recently, studies have shown that knitting and crocheting can reduce stress and lower blood pressure, and the repetitive movements may serve as a kind of comforting meditation. The feel of the yarn offers sensory stimulation, and seeing a scarf get longer or the fingers of a glove form provides a proud feeling of productivity. That may be why, during stay-at-home orders due to the Covid-19 pandemic, sales of knitting and crocheting supplies have boomed. Yarn companies from Spain to Oregon have seen orders jump by more than 75 percent, according to media reports. That’s a lot of knit-one-purl-two-ing going on.

During the pandemic, I may have had to leave the Warm ’N Fuzzy couch, but the couch hasn’t left me. It went virtual, with weekly Facebook chats that gave me a chance to gush over new yarn colors, hear about patterns, and wave at the owner’s new baby. My brain knew she couldn’t see me, but my heart propelled my hands.

Even in tangled times, the couch continues to pull together the threads of community.

Yarn shops provide fiber fans with welcoming spaces and plenty of goodies — because, as all knitters know, those with the largest stashes win.

In addition to knitting and crocheting instruction, this store has also offered a class in taking Instagram-worthy photos of your work.

The staff here is knowledgeable about different types of fibers and creates a welcoming space for knitters and crocheters. Look for a greeting from the store dog.

This store connects people with knitting retreats and cruises.
Closer to home, it hosts knit-alongs — where groups work together on the same pattern — and talks by pattern designers. With a shop measuring 4,000 square feet, owner Lisa Mackey and her husband, Robert, mean it when they say, “If we don’t have it, you don’t need it.”

The store dog, Gromit, welcomes visitors to this cozy shop in downtown Cary, where the sofa and chairs are usually packed with knitters. If you need help with a project, you’ll always find it. Those who love knitters have a lot of gift choices, such as mugs, yarn bowls (ceramic bowls with a slit that lets yarn emerge from the ball inside), and colorful project bags. The store offers weaving classes as well. 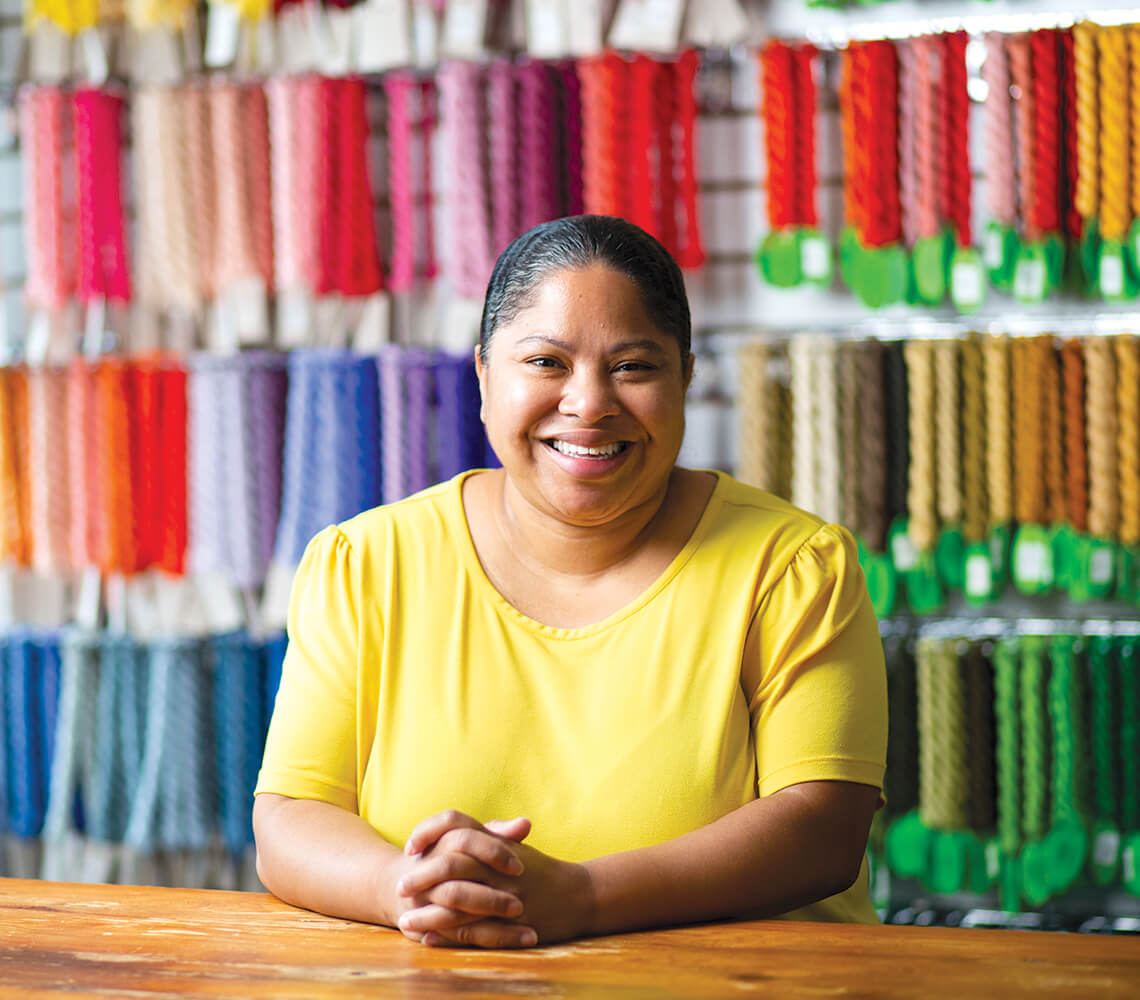 Remi Haygood (above) started knitting and crocheting to relieve stress from her job at a Charlotte bank. Now, she helps others do the same as the owner of Charlotte Yarn. photograph by Dillon Deaton

Studies show that knitting boosts the brain, but here, customers actually knitted part of a brain. The store participated in the Neurons Project, knitting and crocheting fiber strands for a brain display at the Levine Cancer Institute, with the goal of creating what’s described as a “virtual textile neural network” and raising awareness about brain health. The shop, which opened in 2005, encourages charitable work, including making port pillows for chemo patients and participating in projects to aid women in need. The store’s special blue Panther Pride yarn sells out fast among football fans.

The philosophy here is that every small town needs a yarn shop, and this one revolves around a modern pink couch. After many late nights spent dyeing yarn in her home, Kim Clark opened a storefront on South Main Square in 2019 with the help of her daughters, Logan, Lindsay, and Lily. In addition to their own hand-dyed yarn (they’ll even dye to order!), they sell knitting-themed gifts, plus kits, patterns, and tools for fiber arts of all kinds. 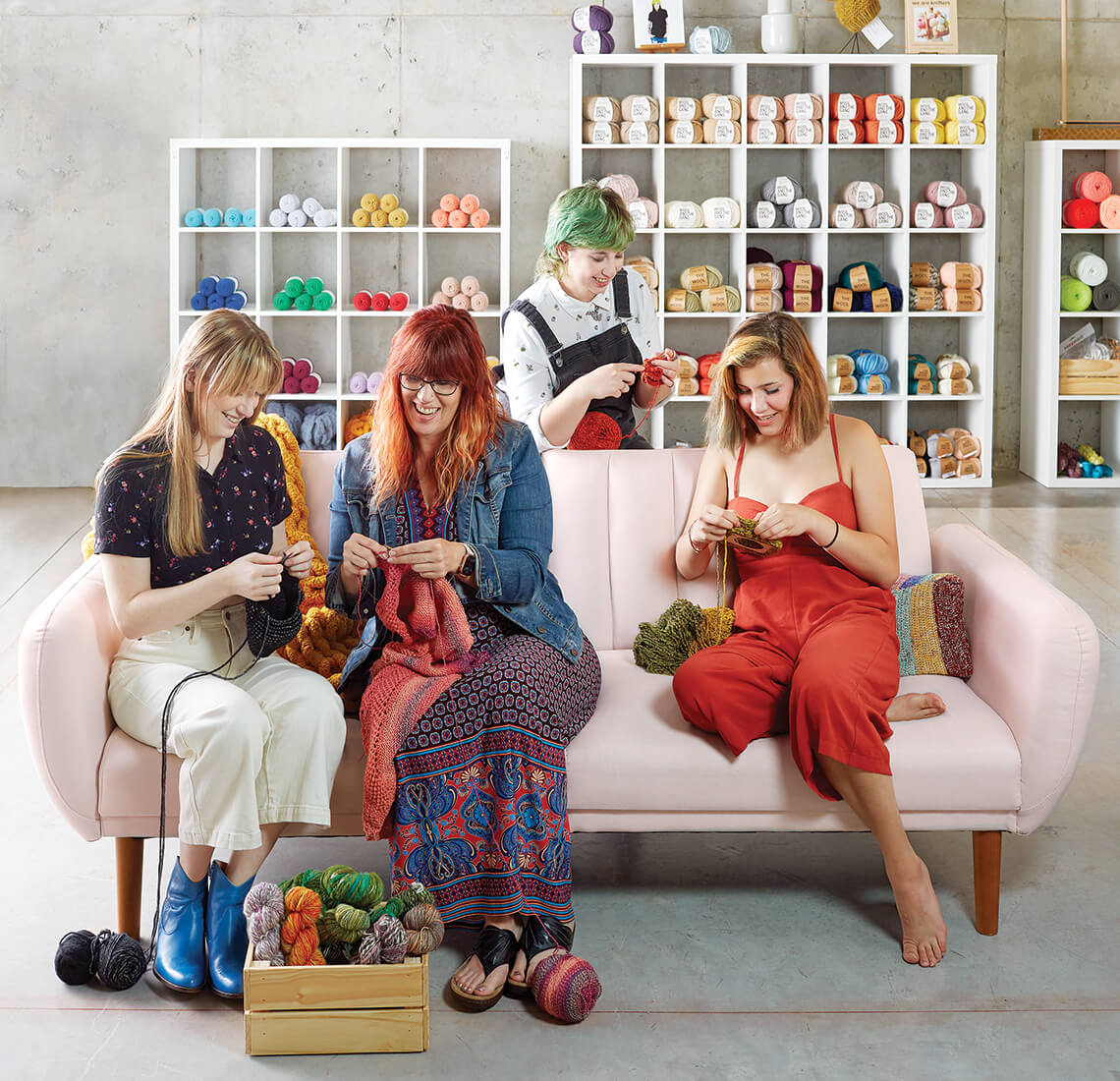 At Hearts on Fiber, (above, from left) Lily, Kim, Logan, and Lindsay Clark dye their own yarn (below) in colors like Sangria (top left), Celestial (center), and Playdough Ice Cream (bottom right). photographs by Stacey Van Berkel 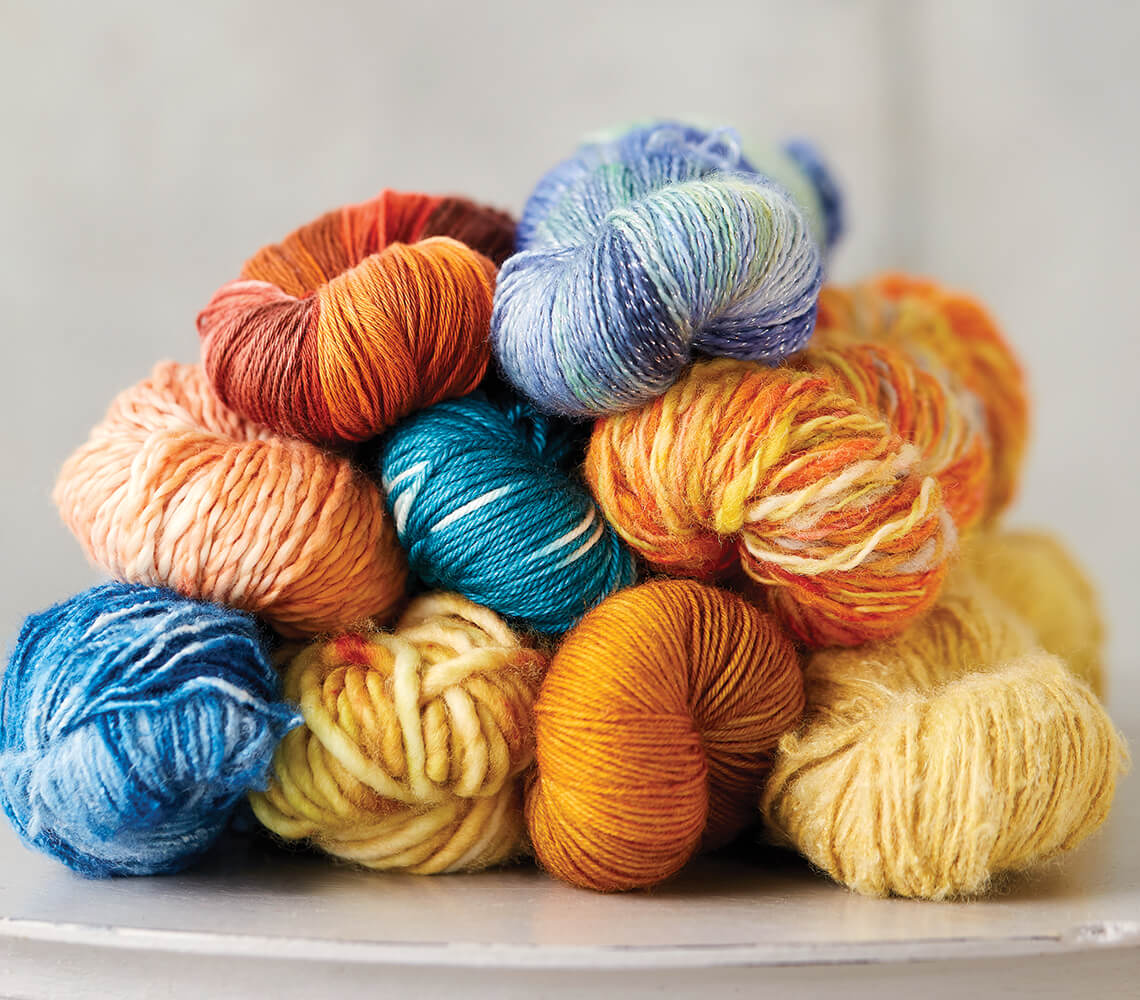 This store offers its own brand of hand-dyed yarn. There’s a weaving and spinning studio in the back.

Spinning and felting are popular pursuits at this store, along with knitting and crocheting.

This shop’s charming blog inspires people to get knitting.

In addition to its storefront, this shop also operates a knitter’s version of a food truck, stocked with yarn and notions, which travels to festivals and other businesses.

Check out the hand-dyed yarn created by the store’s owner.

Need a ready-made gift? Purchase a finished hand-woven item at this store, which also offers classes in weaving, stitching, and dyeing.

For more than 30 years, this store has been supplying and helping knitters and crocheters in a convenient location near downtown Raleigh with ample parking. Check out the class on crocheting for knitters.

When you see a sign with a pirate sheep, complete with an eye patch, seize your needles and come aboard! This shop has been around for 12 years, surviving after Hurricane Florence forced it to relocate in 2018. A mix of locals and coastal visitors have taken classes in knitting or crocheting gnomes and participated in Hats 4 Hope (knitting hats for premature babies). Owner Peggy Baddour says that, with the area’s buccaneer history, a pirate sheep was a natural choice for the store’s mascot, adding, “We’re salty, but in a good way.”