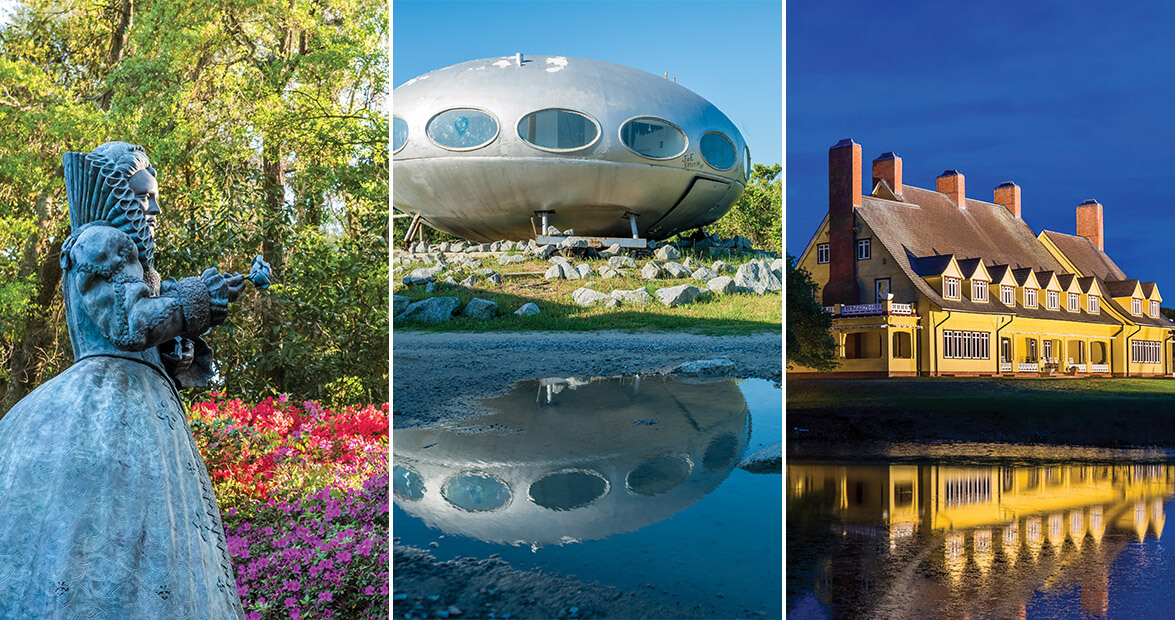 1. You can visit British soil here.

Visit British soil without purchasing a plane ticket by heading down to the British Cemetery of Ocracoke, where four British soldiers are buried. The men perished aboard the H.M.T. Bedfordshire, which was struck by a torpedo off the North Carolina coast during World War II. The cemetery’s grounds are leased in perpetuity to the British Commonwealth. Meanwhile in Manteo, The Elizabethan Gardens recreate the regal blooms and manicured hedges of England during its golden age. There’s even a rosebush that was sent by Queen Elizabeth II, from the royal rose garden at Windsor Castle.

2. Hatteras cats have a curious quirk.

If you’ve paid a visit to Hatteras Island’s beloved Burrus Red & White Supermarket, surely you’ve pet the cats that laze away on the front porch. But have you ever made a point to count their toes? Some of them have anomalous six on each paw. Store owner Allen Burrus says the felines arrived on a ghost ship a few hundred years ago. When looting the ship, locals brought them ashore. More six-toed cats have appeared over time, but Burrus recently spayed and neutered the wandering animals. A surplus of toes — and cuteness.

Glad you asked. The Outer Banks is steeped in pirate lore, so it makes perfect sense that certain town names honor this swashbuckling heritage. In their looting attempts, pirates would often try to lure ships closer to shore so that they would run aground. They are said to have done so by tying lanterns to the necks of old horses, which were also called “nags” at the time. Hence, “Nags Head.” Kill Devil Hills has a similar origin story: “Kill-devil” was a type of rum that originated in the West Indies and became popular on the Outer Banks. Some say that after a shipwreck, scavengers salvaged the rum and hid it in the sand dunes. If you happen to find some, save us a nip.

4. Hatteras was among the first to hear about the sinking of the Titanic.

North Carolina’s coastline has long been known as a dangerous place for ships, which is why the U.S. Department of Agriculture commissioned the Hatteras Weather Bureau Station in 1902. Ten years after it was built, it became inextricably linked to the most storied maritime tragedy of all: the sinking of the R.M.S. Titanic. On the fateful night of April 14, 1912, the station received one of the very first distress signals from the British passenger liner — just moments after it struck an iceberg. Hatteras was one of many stations to dismiss the message as a hoax, and only one station, in Newfoundland, sent help. For decades, the forgotten log entry detailing the distress call was stuffed into a wall as insulation. It was recovered during the station’s restoration in 2005. Though the station was decommissioned in 1946, you can still visit it today.

5. Whalehead was once a top-secret testing site for rocket fuel.

Whalehead Club changed hands a number of times from the 1930s to 1980s. At one point, it was leased to Atlantic Research Corporation. Operations were kept under wraps, but we’d later learn that the company used the former home as place to test rocket fuel that helped United States win the Cold War and make it to the moon. Why’d they choose Corolla? It was on an incredibly remote stretch of land, a perfect place to keep things hush-hush.

7. Frisco’s got its own flying saucer.

You might think you’ve traded the Outer Banks for Outer Space when you drive along a remote stretch of NC Highway 12 and spot the “Futuro Saucer Home.” The UFO-shaped abode is an unmistakable sight, but not every passerby knows that it’s one of only few dozen homes of its kind left in the country today. After it was built in 1970 and moved to Frisco from New Jersey in 1983, it has served a campground office, hot dog stand, and just about everything in between. Today, it’s the second most-photographed site on the Outer Banks.

8. The first Union victory in the Civil War happened here.

There’s nothing quite like the hushed sounds of waves and seabirds along the Outer Banks’ stretch of beaches, but it was anything but quiet here in late August of 1861. The Civil War had begun just four months prior, and the Battle of Fort Hatteras and Fort Clark would prove to be a pivotal moment in American history. Following heavy cannon fire over Confederate forts in the area on August 28 and 29, Union troops secured their first victory in the war. This triumph and another Union victory at the Battle of Roanoke Island in 1862 would lead to the establishment of two of the South’s first havens for runaway slaves: the Hotel de Afrique and the Roanoke Island Freedmen’s Colony.

9. At its narrowest, the Outer Banks is only 150 yards wide.

One of the thinnest stretches of land along the Outer Banks is located between Buxton and Avon. At the Haulover, otherwise known as the Canadian Hole, approximately 150 yards separates the Pamlico Sound from the Atlantic Ocean. Inlets often open and close with the changing weather on the Outer Banks, and back in the day, vessels not wanting to sail down to Ocracoke Inlet would be pulled across the spit of land with ropes. Today the spot is known for its excellent windsurfing and kite surfing conditions.

10. Beyond surf shops and oyster bars: a ghost town—err—island.

Fancy your own desert isle? Hop aboard a ferry in Ocracoke or Atlantic and head to Portsmouth Island. Given its proximity to Ocracoke Inlet, once a major trade route, Portsmouth was a lucrative piece of land in the 1850s. But after trade moved farther up on the Outer Banks after the opening of Oregon and Hatteras inlets, all of its residents eventually left. On the north end of the island, you’ll find a vacant post office, general store, life-saving station, and house maintained by the National Park Service. Portsmouth lacks the most basic comforts, but has some of the best off-the-grid fishing, camping, and beach-strolling spots this side of anywhere.