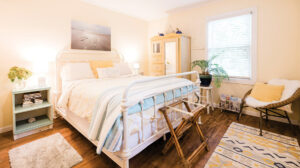 In 1839, before becoming the first keeper of the Oak Island Lighthouse, Jacob Brinkman built his home in what would later be known as Southport. Today, an original cottage on the property serves as a vacation rental and features a full kitchen, a small screened back porch (complete with beach supplies), and a private patio surrounded by lush vegetation and a wooden fence — providing a secluded feel less than a block from the shops and restaurants of Howe Street. Guests are welcomed with charcuterie from Southport Cheese Shoppe and a bottle of dry white wine. 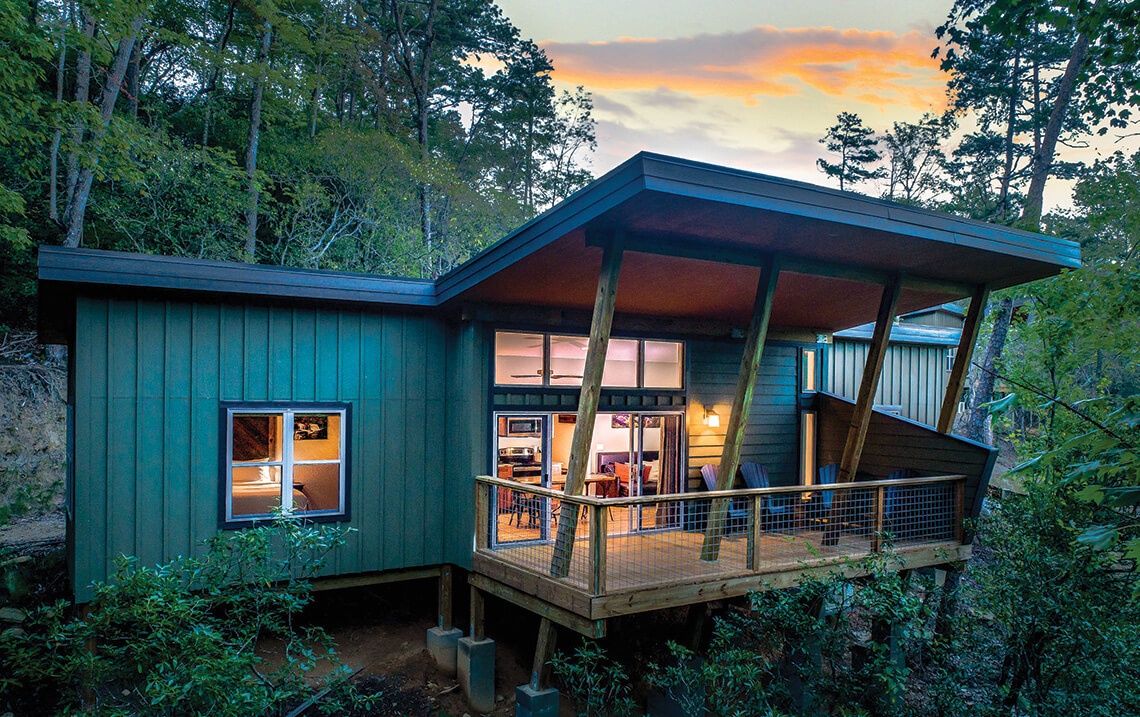 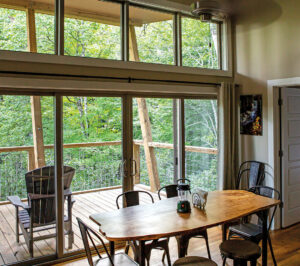 At Cabin 71, the large windows and deck overlook a private hiking and biking trail. photograph by Tim Robison

Sitting on 132 acres, Pilot Cove offers luxury cabin rentals that cater, in part, to outdoor recreation enthusiasts drawn by neighboring Pisgah National Forest. Expert mountain bikers can find speed and hit jumps on a closed-loop mountain biking track — equally suited for beginners who prefer to keep both wheels on the ground. At the end of the day, after kicking off hiking boots or fishing waders in the cabins’ mudrooms, guests can convene around a firepit while watching the sun dip behind the mountains at Sunset Point, or wheel a locally made live-edge kitchen table out to a private deck for an al fresco dinner among the trees.

The cabins were designed to be functionally and visually integrated with nature, with color palettes pulled from photographs of the national forest. “We want folks to come in, feel inspired, and interact with the forest, but have all the posh amenities that you would find in a very nice hotel room,” says Collin O’Berry, one of Pilot Cove’s partners. “You’ve got very comfortable linens, very comfortable mattresses, fully stocked kitchens, and nice bathrooms — but front and center is nature.”

Visitors have been drawn to the alleged healing powers of the mineral-rich White Sulphur Springs since the 1850s. Today, the site — owned by a group of five local friends — features a lodge and six guest cabins sporting natural cedar-and-stone exteriors, including timber porches with rocking chairs and gas grills. Inside, cathedral ceilings give the studio-style cabins a spacious feel. Hammocks, horseshoe pits, and a firepit stacked with wood encourage guests to appreciate the outdoor setting, and the Ararat River, which flows along the front of the property, offers easy access to fishing and kayaking. “We really want people to use the grounds — to get out and enjoy it and bring picnics,” says Ellie Needham, one of the owners. “We want people to sit back and relax and take it all in” — including the spring’s restorative waters. 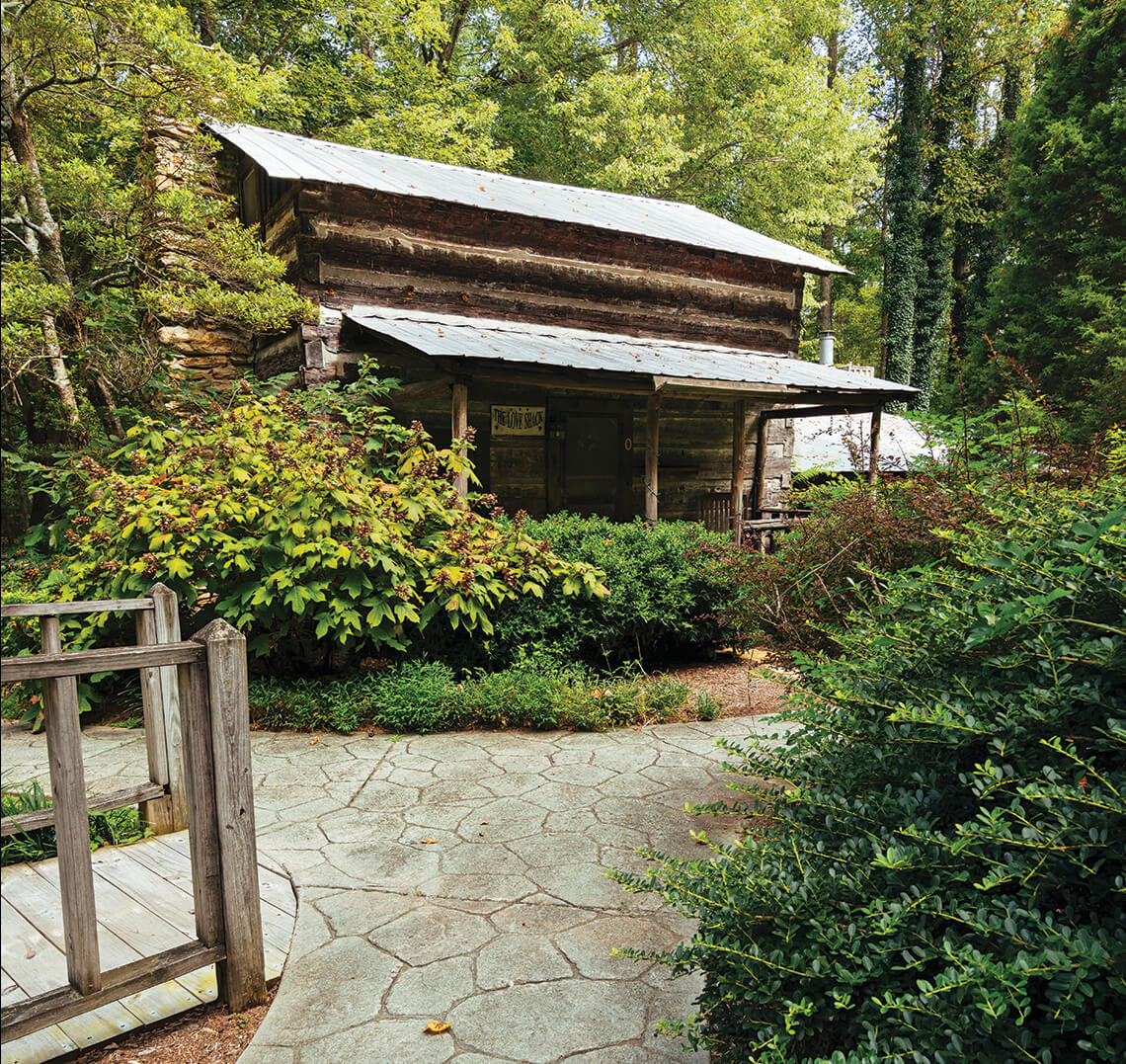 Six of the cabins at Pilot Knob Inn were restored and repurposed from century-old tobacco barns. photograph by Adam Mowery

In the shadow of Pilot Mountain, Pilot Knob Inn provides a retreat from the hustle and bustle of everyday life, and an opportunity to foster a deeper connection with your partner. “[People are] so busy making a living that we don’t stop to enjoy life,” says innkeeper Jennifer Allen. “People come here to unwind, relax, and get back to nature.” Among the cozy accommodations at this romantic, adults-only bed and breakfast are six cabins that were restored and repurposed from century-old tobacco barns, each relocated from within 20 miles of the inn. Although upgraded to include modern amenities like gas fireplaces and whirlpool tubs for two, the cabins reveal their history in their interior walls, which retain the tobacco barns’ original hand-hewn timber.

Guests of the Oak Grove Retreat farm can stay in a cottage that was originally three separate structures: two front rooms constructed in turn-of-the-19th-century-style balloon framing and a much older kitchen area. The cottage is filled with antiques and rustic furniture, and features white pine walls, a gas fireplace, rocking chairs on the front porch, and a screened back porch overlooking the original tobacco barn and an old-growth forest. Guests can enjoy massages, guided meditation, a nature trail, and quiet reflection in the historic St. Anne’s Chapel — all without leaving the farm.

As shipping traffic increased in the years following the Civil War, many ships were lost in the perilous waters off North Carolina’s coast. In 1874, Caffey’s Inlet Lifesaving Station was established as one of seven such outposts on the Outer Banks. Servicemen lived and worked in the wood-shingled cottage, keeping watch from a hipped-roof lookout tower. The station was abandoned in the late 1950s, as modern equipment and a decline in the use of sailing vessels reduced the number of shipwrecks in the area. Today, Sanderling Resort operates the site as the Lifesaving Station restaurant, which serves a seasonal menu of Southern coastal fare made with regionally sourced ingredients. 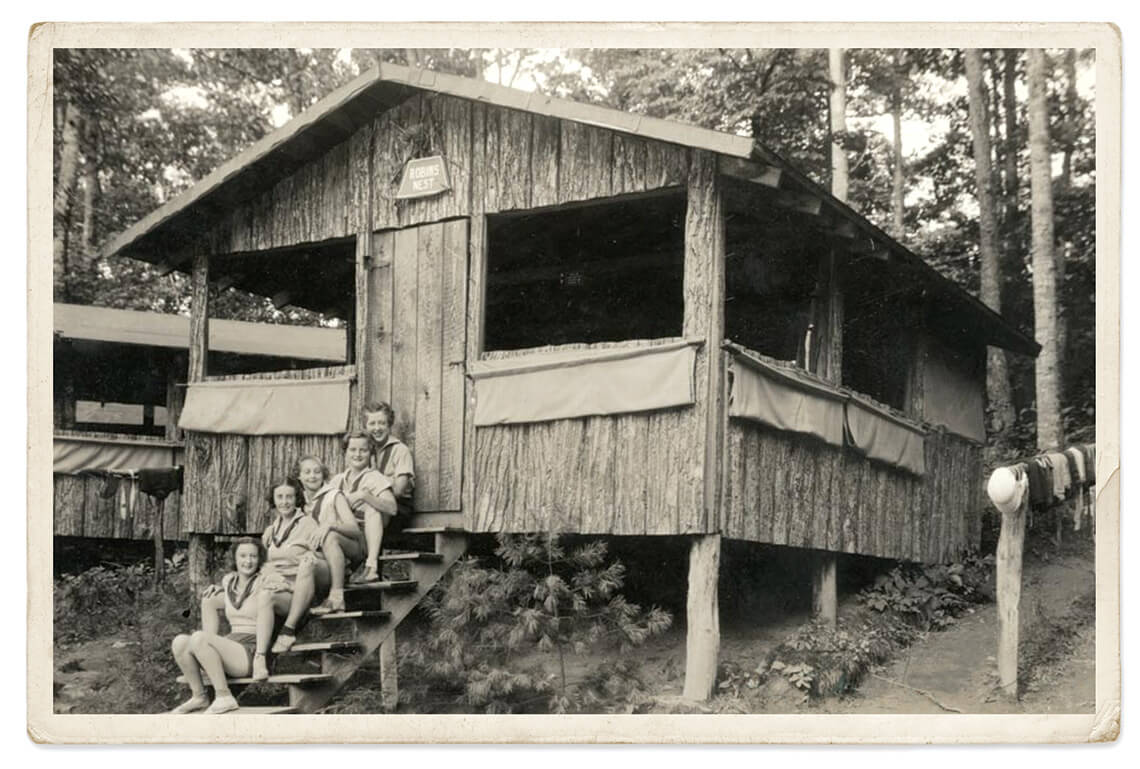 Camp Merrie-Woode, at the base of Bald Rock Mountain in Sapphire Valley, was established as Lake Fairfield Camp in 1919, amid a national movement that saw increased outdoor recreation and education opportunities for girls. As more women matriculated into colleges and universities and fought for their right to vote, camp directors strove to instill in young women self-reliance and strong character. The oldest of Merrie-Woode’s Adirondack-style cabins date from 1919 to 1922, and they continue to shelter adventure-seeking girls and young women each summer. 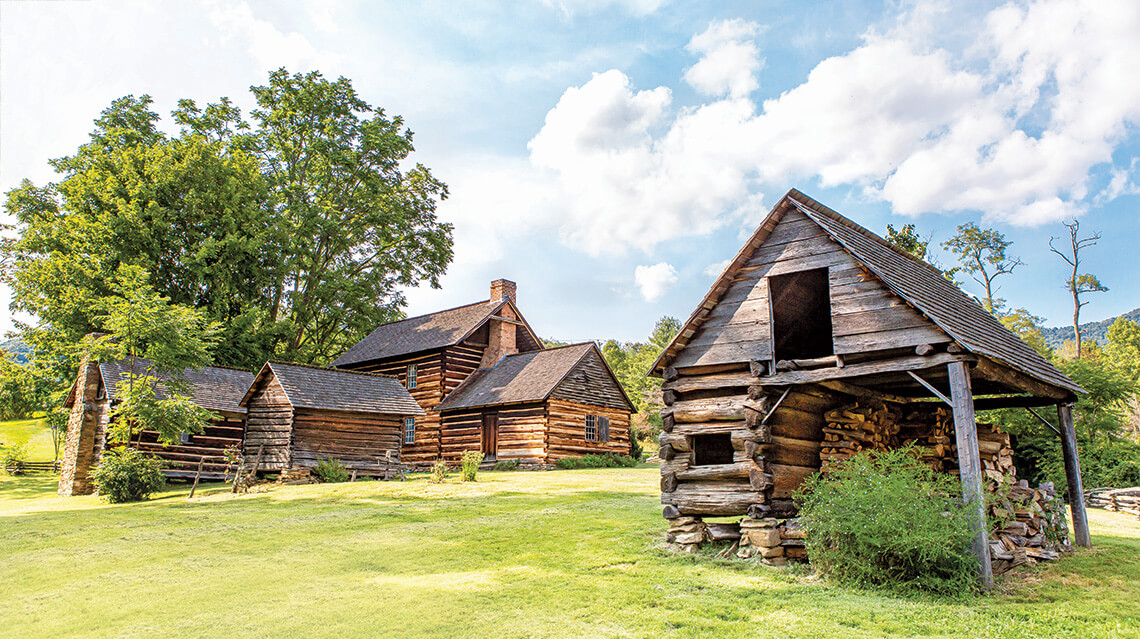 The log cabin and outbuildings at the Zebulon B. Vance Birthplace take visitors back in time. photograph by Tim Robison 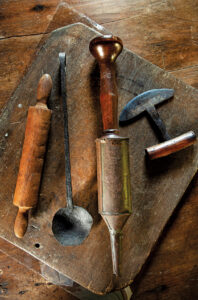 In the log cabin and outbuildings at the Zebulon B. Vance Birthplace, visitors can see 19th-century kitchen implements like a sausage stuffer and a chopper. photograph by Tim Robison

Former North Carolina Gov. and U.S. Senator Zebulon B. Vance was born on a remote farm in Reems Creek Valley in 1830. Part of the land for the farm was originally purchased by Zebulon’s grandfather David Vance Sr. with a land grant that was issued as payment for his service in the American Revolution. Today, visitors can tour the reconstructed log cabin — called a saddlebag house because of its layout of two rooms on either side of a central chimney — with its original circa-1795 fireplace, as well as a loom house, toolshed, springhouse, smokehouse, corncrib, and quarters for enslaved people. On display are farm tools such as a hay fork and a bow yoke, domestic tools such as an iron and cooking utensils, and a clock — a rare possession at the time and an indicator of the wealth and prominence of the Vance family.

Bennett Place State Historic Site in Durham is where the largest troop surrender of the Civil War occurred. Visitors can explore a reconstructed farmhouse, kitchen, smokehouse, and milk house. photograph by Charles Harris

On April 26, 1865, Confederate Gen. Joseph E. Johnston and Union Gen. William T. Sherman met at the home of James and Nancy Bennitt (the original spelling) to negotiate what would become the largest troop surrender of the Civil War, effectively ending the fighting in the Carolinas, Georgia, and Florida. Although the farmhouse and kitchen burned down in 1921, the buildings were reconstructed in the 1960s around an original stone chimney and are open for both guided and self-guided tours. 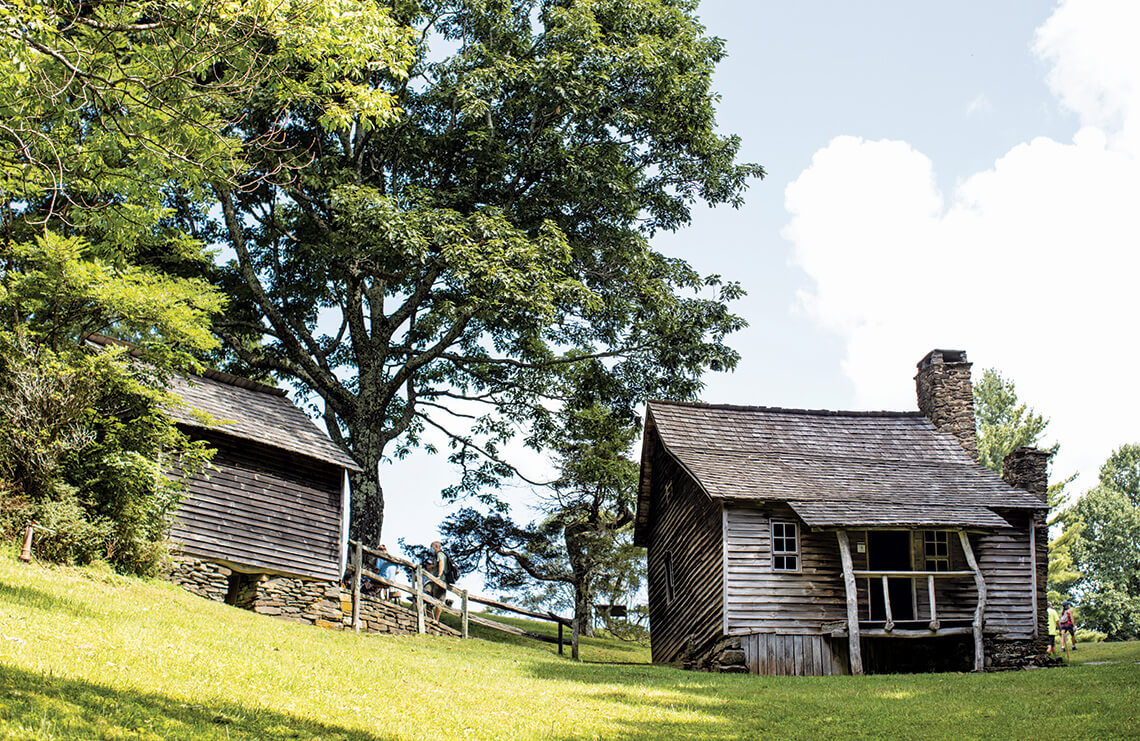 Martin and Caroline Brinegar took the Caudill family into their home during the 1916 flood that destroyed most of the Caudills’ property. photograph by Revival Creatives

Located on what is now the Blue Ridge Parkway, Brinegar Cabin was built by Martin Brinegar and his wife, Caroline, in the 1880s. The two-room, one-anda- half-story cabin with clapboard siding, wooden shingles, two dry-stacked chimneys, and a stone foundation is a surviving example of construction methods used by early settlers in North Carolina’s remote regions. The cabin rests on what was once a 125-acre farm, where the Brinegar family maintained livestock, gardens, and an apple orchard. They grew, collected, and made the things they needed, living a nearly self-sufficient lifestyle. Caroline made the family’s clothing, weaving linsey-woolsey cloth on a four-poster handloom that had been a wedding gift from her father. Martin earned a little money as a cobbler, selling shoes for about a dollar a pair. Caroline and the children collected herbs to sell to merchants in Jefferson and Boone. Today, the cabin, cellar, springhouse, and a garden are open to visitors as an interpretive exhibit, offering a glimpse into Appalachian farm life from 1885 to 1935. 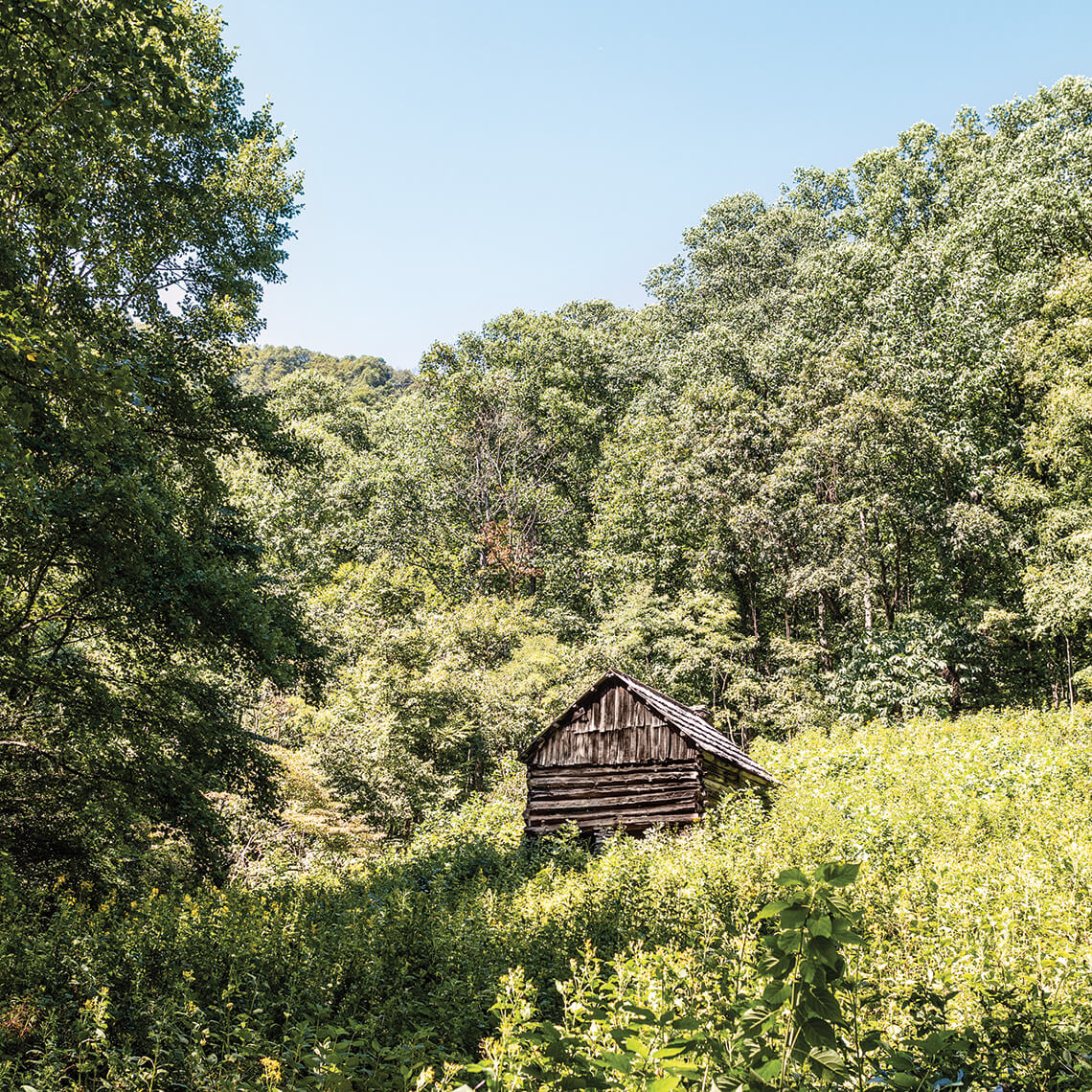 Built in 1890, Caudill Cabin in Basin Cove was home to Martin and Janie Caudill and the first six of their children before the family moved to Virginia in 1906. In Basin Cove, they grew crops, raised livestock, hunted game, and made clothing and quilts from wool and flax produced on their farm. In July of 1916, not long after the Caudills returned to Basin Cove, two tropical storms swept through the Appalachian Mountains within days of each other; after the first storm saturated the soil and swelled the streams, the second brought record-breaking floods and massive landslides, destroying most of the houses and farmland. Miraculously, Caudill Cabin survived. Today, it can be visited by hiking 3.3 miles along Doughton Park’s waterfall-lined Basin Creek Trail. 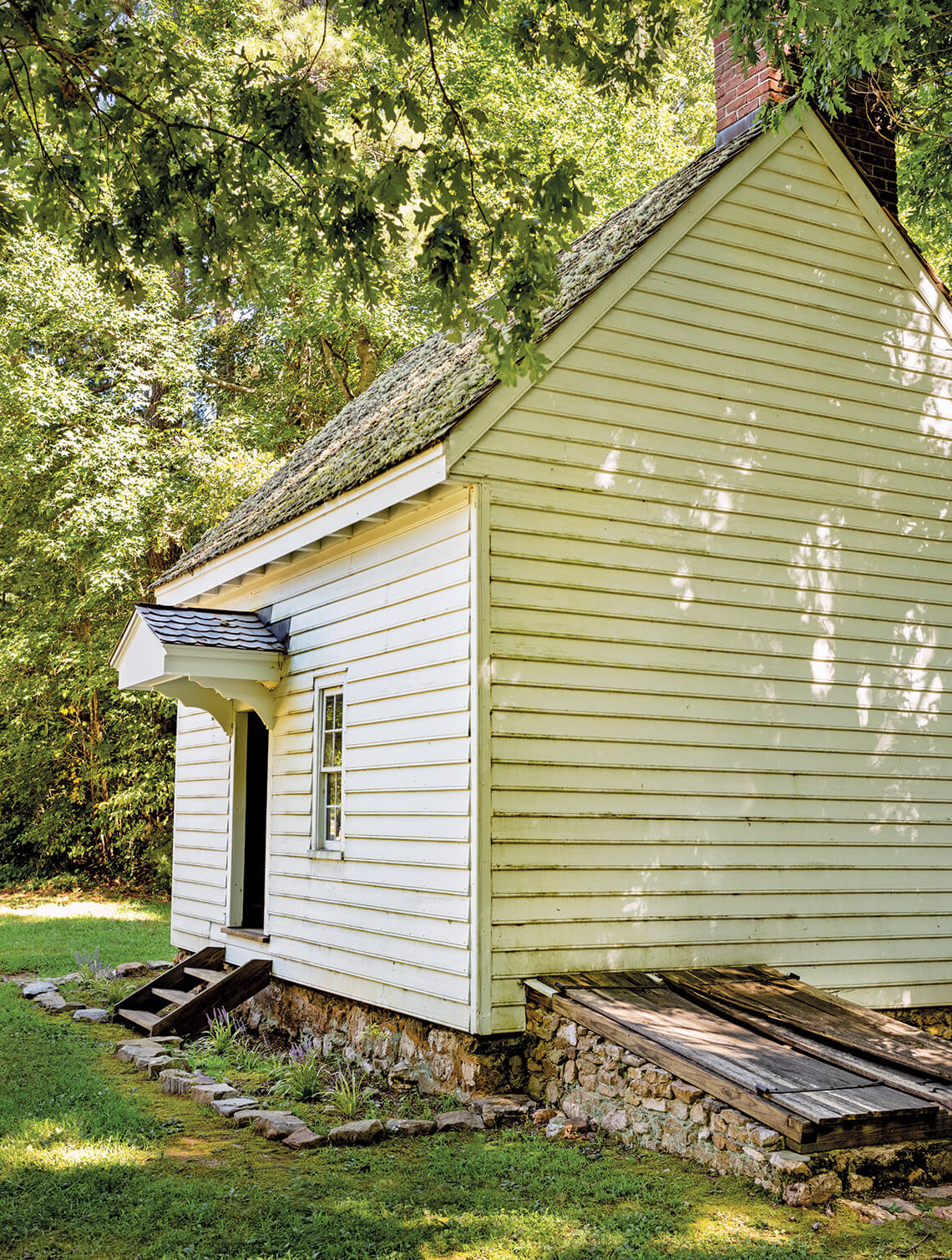 Before Nathaniel Macon’s death in 1837, he requested that each of his friends throw a stone onto his grave. Today, visitors to Buck Spring Park can see a pile of stones where he was buried. photograph by Charles Harris

Nathaniel Macon was born in 1758 on his father’s tobacco plantation in the Shocco Creek area, in what is today Warren County. After joining the militia to fight the British in the American Revolution, Macon was elected to the state senate in 1781. From there, he went on to hold seats in both the U.S. House of Representatives — where he served as Speaker of the House from 1801 to 1807 — and the U.S. Senate. During his nearly five-decade political career, he became known as an advocate for states’ rights and for North Carolina’s agricultural interests. Although his home was destroyed by a fire in 1977, a replica was constructed on his historic plantation, now Buck Spring Park. Visitors can also view a log corncrib, a smokehouse, and Macon’s gravesite across the street, and enjoy mountain biking and hiking trails, a playground, and a fishing pier. 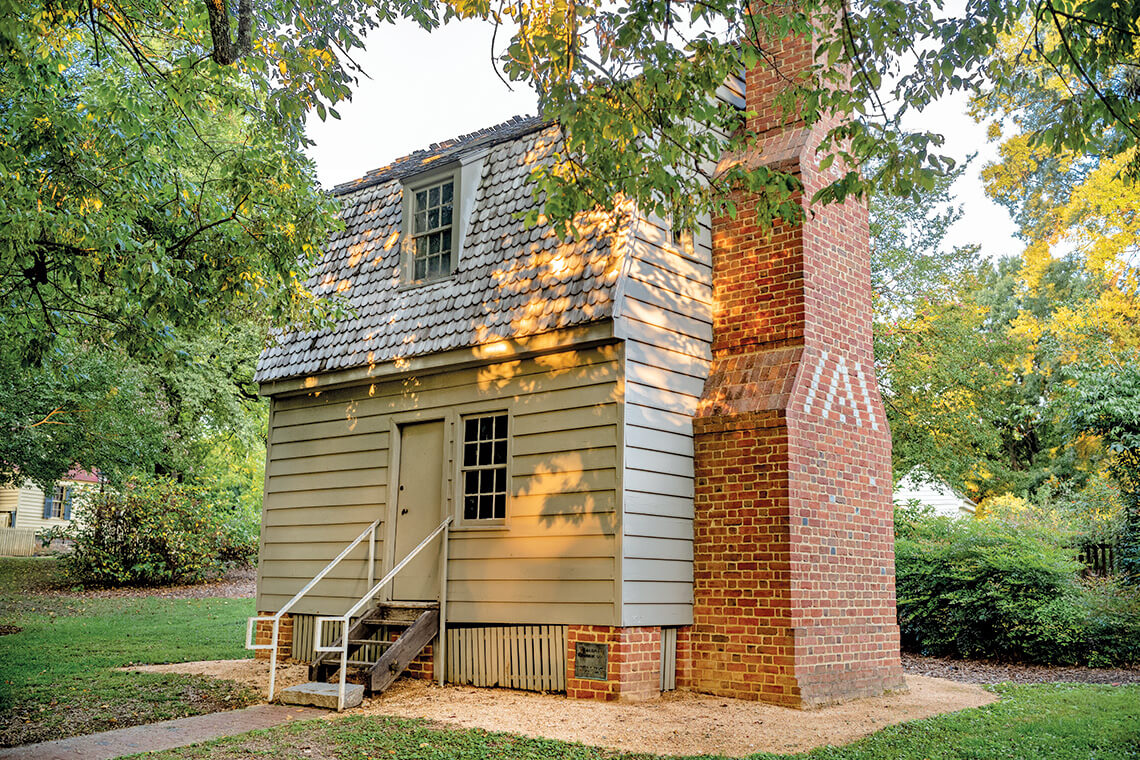 President Andrew Johnson might have been born in this cottage in Raleigh — but we may never know for sure. photograph by Charles Harris

Although no proof has been discovered to verify the birthplace of the 17th president of the United States, local lore has it that Andrew Johnson was born in a small one-story house with a loft in the heart of Raleigh in 1809. Mystery aside, the house is interesting in its own right, in that it is fairly well-traveled, for a house. Believed by architectural experts to have been built in the late 1700s as a kitchen and then converted into a cottage, the house was moved four times. It was finally relocated to Mordecai Historic Park in 1975, where it can now be toured as part of a collection of structures that depict early life in Raleigh.

By the time of the Civil War, Nags Head had become a popular resort destination among the planters and merchants of the state’s northeastern counties. It wasn’t until after the war, however, that development reached the ocean side of the island. The cottages in Historic Beach Cottage Row — several of which are available as vacation rentals — date from just after the Civil War to the early 1900s. Despite their range in age, they share many similarities, including expansive porches for cooling off in the Outer Banks sea breeze and — most notably — the wood-shingled exteriors that earned these homes the nickname “the Unpainted Aristocracy.”