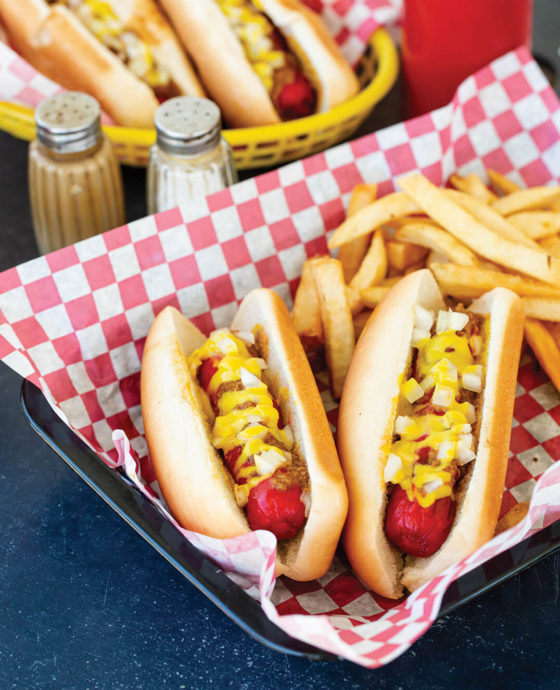 The aptly named Ole Time Grill — originally Thornton’s — dates back to 1946 and comes with a wall of vintage photos to prove it. While tucked into one of the tiny hot spot’s two booths, you can marvel at a black-and-white portrait of what may be the largest hog ever raised and slaughtered in the area. “He weighed 1,305 pounds,” notes grill owner Robert Smith, who estimates that he fries up between 800 and 1,000 Bright Leaf hot dogs a week. “I do homemade hamburgers and lemonade, but Bright Leafs are my main thing,” says Smith, who makes good company if you mosey in solo. “They’re the best in North Carolina … according to me.”

Situated smack in the middle of downtown, Cricket’s offers Bright Leafs, other short-order staples, and abundant color. Leaning out the front window of the bright yellow-and-white trailer that houses the walk-up grill, one of the two attendants half-hollers and half-sings to a waiting customer, “Sir, your order’s here, baby!” Next to the window, a sign proclaims, “Cricket’s: Guilty of having the best hot dogs in town.” Another advises “Cash only” — but not to worry, as a well-worn on-site ATM can help. “They need to put a Cricket’s in Pine Level,” says 74-year-old Joyce Pulley, who regularly makes the 15-minute drive for her Bright Leaf franks fix. Also nearby and well-stocked with red hot dogs are Millie’s (109 South Brightleaf Boulevard) and Zack’s Char-Grill (618 East Market Street).

This grill and convenience store is to red hot dogs as Sun Records is to rock ’n’ roll: temple for the faithful and a point of pilgrimage for far-flung fans. No fewer than seven weiner workers are required behind the counter to keep up with demand. The Grocery Bag moves anywhere from 1,000 to 1,500 dogs per day to locals and fresh arrivals alike, according to owner Donna Fitzgerald. “Everyday we see new people coming in, saying, ‘We heard you sell red hot dogs,’” she says. And if you suspect that Bright Leaf’s base of believers is aging out, think again. Strolling from the busy counter to a booth, Aidan Carpio, 18, totes four red hots — all for himself. “Been a rough day,” he says with a shrug.

An iconic neighborhood landmark since 1958, Jones Café offers more of a diner vibe, with ownership going back three generations. You can’t miss the place: Just look for the mustard yellow building with a black awning and Bright Leaf red hots splashed across its front windows and doors.

While JoCo is Carolina Packers’ home turf, it by no means holds a monopoly on red frank fever. Just across the Harnett County line, Daddy Bob’s serves up Bright Leafs with an array of toppings, including three kinds of slaw — regular, jalapeño, and barbecue — as well as a rich cheese sauce.

Related: Read about the story of Bright Leaf hot dogs.