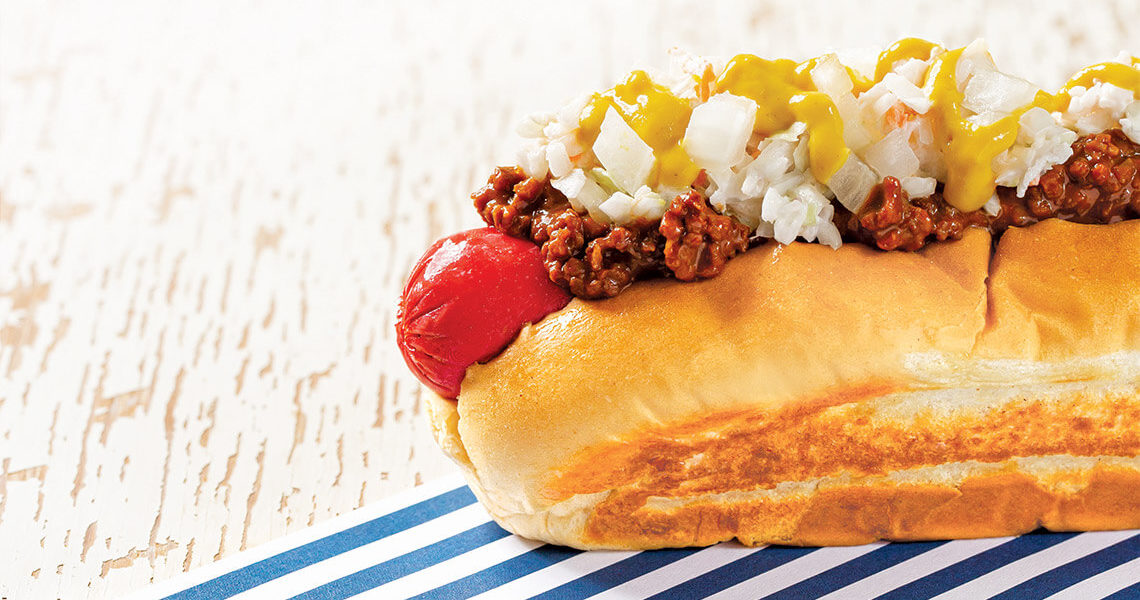 Red. It’s the color of peak summer. The wardrobe of sass and flash. Red is speed: the stripe splashed across Richard Petty’s classic 1973 Dodge Charger. Red is love: the roses presented to a blushing crush. In the form of an evening gown or a traffic signal, red commands attention. Red wants to possess and consume. Or, in the case of a famously red hot dog, it wants to be consumed. 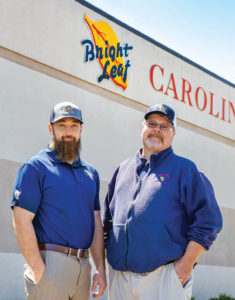 Since 1941, the Carolina Packers meat-processing plant in Smithfield has produced Bright Leaf hot dogs, each pork-and-beef frank bathed in the radiant red of a particularly rich sunset. But the actual moment when a Bright Leaf gets its signature hue is anything but poetic. It happens in a noisy space toward the back of the winding plant. Racks of regular old hot dogs, the color of wet sand, float via an elevated rail track into a steel-plated tunnel, which shakes and shudders like something out of Willy Wonka’s fanciful chocolate factory. Inside, red coloring showers down. And finally — behold! — the franks emerge in all their shimmering sunburst glory.

Watching the process from the cement floor below is 37-year-old Kurt Byrd. Serious and intense, his official title is chief financial officer, but his duties encompass all manner of chores. Sometimes, Byrd lines up with fellow packers on the concrete loading dock to help box up bags of Bright Leafs for shipment to area grocers, as well as online customers in such far-flung locations as New York, Arkansas, and California. For Byrd, as for many in Johnston County, these wieners are a way of life. “My grandfather worked here,” Byrd says. “For 46 years, starting in the mid ’50s, when he brought home the bacon, he was bringing it from this same plant. That’s why I feel so strongly about being here. It’s a tradition that we’re passing on.”

Hot dog fans throughout the region swear by Bright Leafs with a vigor that’s akin to the way many North Carolinians pledge allegiance to college basketball teams. The franks are associated with everything from church revivals to first dates. “Eating red hot dogs goes so far back here that I don’t remember ever not eating them,” says Jeff Holt, the 57-year-old mayor of Pine Level, just 10 minutes east of Smithfield. “It’s a source of pride and identity. We were nursed on ’em.” 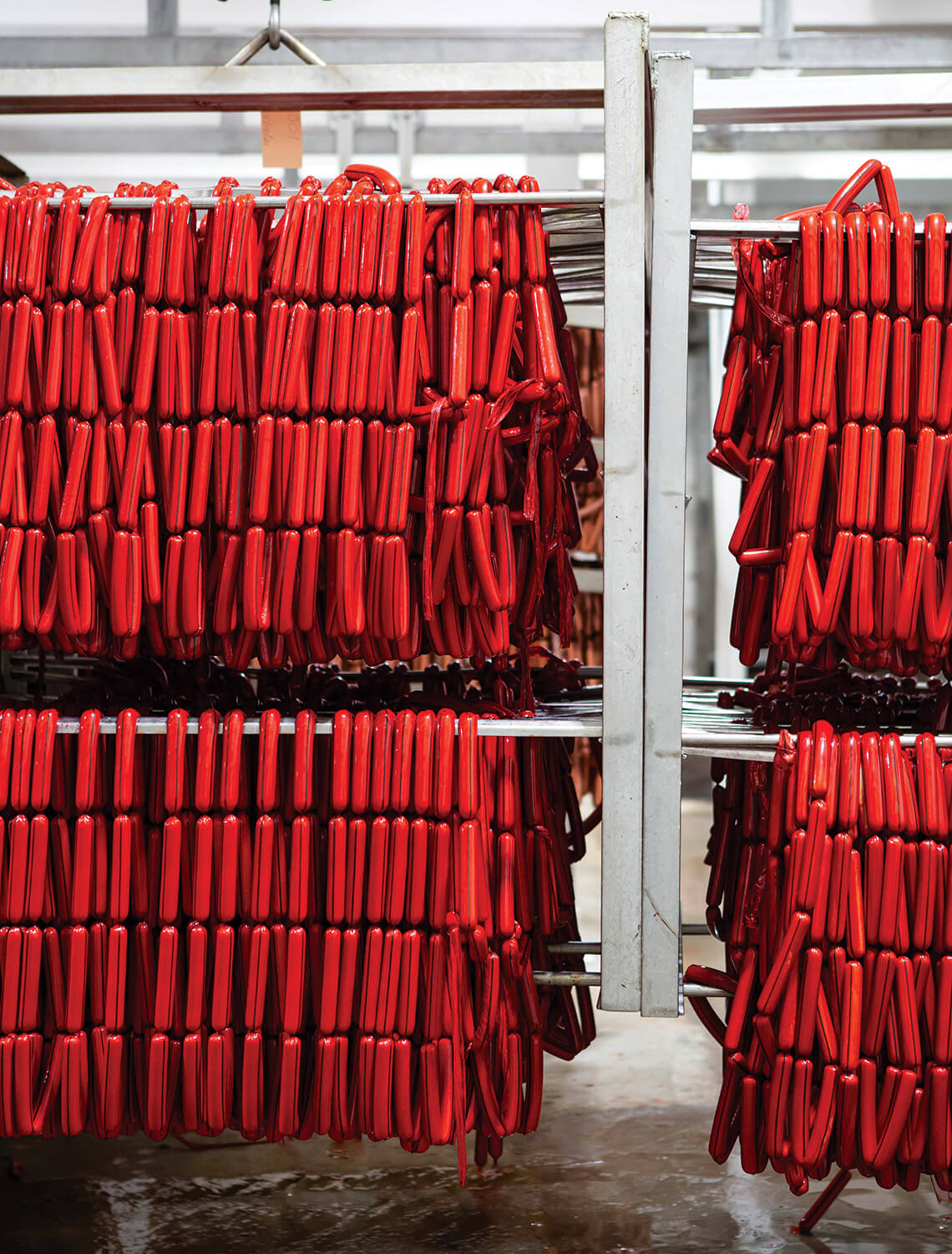 Near the end of the factory line, staffers sort the red hot dogs by hand, discarding any oversize, undersize, or otherwise misshapen franks. photograph by Tim Robison

Devotees fry the dogs; they grill ’em, boil ’em, sprinkle ’em into casseroles, and even chomp ’em down raw. In addition to the eye candy of the Bright Leaf ’s red hue, these diehards say, the flavor is a treat that your average Oscar Mayer just can’t match. A factory storeroom is piled high with the secret spices that give all Bright Leaf hot dogs — both the company’s line of original red dogs and its shorter, fatter, extra-spicy Red Hots — their tongue-tingling taste. “They’re sweeter than an all-beef hot dog,” says Ashby Brame of the Johnston County Visitors Bureau, which has made the wieners a big part of its marketing pitch. “Not candy-sweet, though — they’re tangy.”

The magic of Bright Leaf hot dogs doesn’t end with the color and the flavor — there’s even the feel of the packaging. Conventional franks come in vacuum-sealed packages, which are designed to prolong the shelf life of the product but have all the charm of an annual report. Bright Leaf originals come loose in bags of 10 or 20. “What’s special about it is not only the look and feel,” Byrd says, proudly hoisting a bag out of a nearby refrigerator and rolling it in his fingers, “but also the air in the bag further cures and develops the seasoning and gives you more flavor.”

The Bright Leaf legend began in 1939 as an attempt by Johnston County leaders to establish a meat-processing plant that would fire up the economy. To launch the venture, backers tapped John A. Jones, an executive from Georgia, who’d apparently relished a red hot dog in the Savannah area and decided to take the same approach here — keeping the color but changing the spice mix, which remains Johnston County’s most closely guarded secret.

Two years later, the scarlet links took off, along with an array of other pork products. Today, 15 refrigerated trucks deliver to the coast — where, during beach season, red hot dogs seem in greater demand than sunscreen — and as far west as Hickory. A few Triangle spots carry Bright Leaf hot dogs, too, including Wegmans and Walmart. 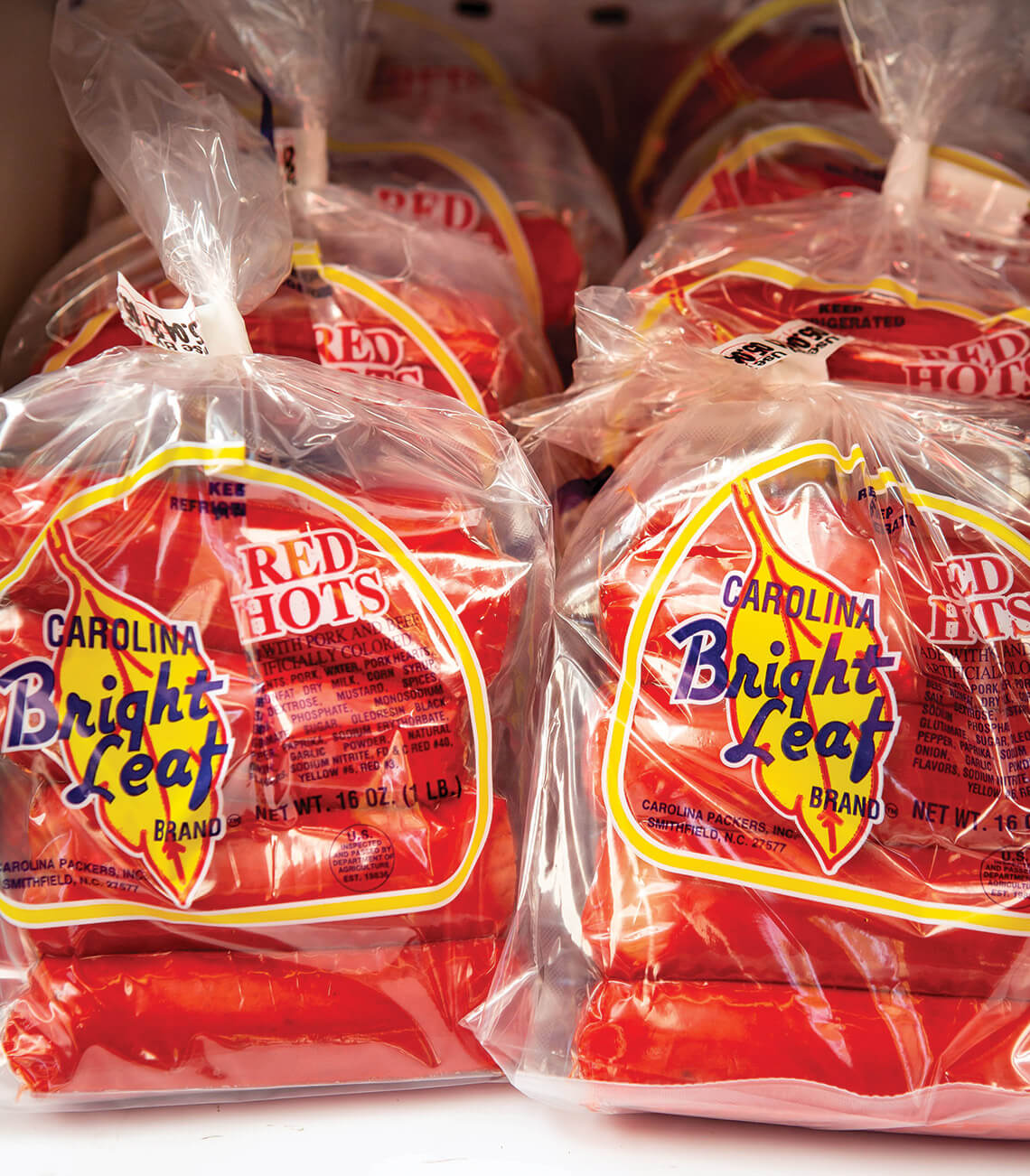 Those who grew up wolfing down Bright Leaf ’s red hot dogs make eager evangelists, including Byrd. Of the many jobs he holds at Carolina Packers, his favorite seems to be serving samples to curious passers-by at hot happenings like the North Carolina State Fair. Byrd and a colleague unfurl a banner emblazoned with the Bright Leaf logo, then cook up the dogs on a pancake griddle. “We get ’em good and charred, get a good black streak down ’em,” Byrd says, his voice rising with excitement. “Then we cut ’em up and toothpick ’em for people.”

And that’s when the magic strikes like a screaming red fireball: “When someone tries a Bright Leaf for the first time, the look on their face is priceless,” Byrd says. “Especially folks from up North. At first, they say, ‘It’s really red; I don’t know about this.’ Then they bite into one, and it’s, ‘Wow!’”

Related: Find out where to get yer hot dogs!