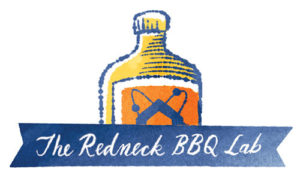 It’s not eastern barbecue, so there’s no need to check your map to see if you somehow took a turn toward the setting sun and wound up along the Rio Grande. And it’s not western North Carolina barbecue either, that tangy, coarse-chopped food of the gods that made Lexington a household name.

This is competition-style barbecue, so don’t judge it based on your notions of the ’cue of your youth. Just open your mouth and your mind, and give a forkful of The Redneck BBQ Lab’s brisket or pork or burnt ends an honest try. It may not be like any barbecue you’ve ever eaten. But it’s barbecue you surely won’t soon forget.

In 2016, when Jerry Stephenson opened the joint in the former Dairy Queen at the intersection of Interstate 40 and NC Highway 210 — just east of McGee’s Crossroads in Johnston County — he was met with breathless exclamations of joy. He recalls those early conversations, grinning so big his blue eyes nearly disappear.

“Folks said, It will be wonderful to have eastern North Carolina barbecue back here again,” he remembers. “It will be awesome to have whole-hog barbecue right down the road again. Oh, man, I’ve missed hush puppies! And I had to say: Nope. I’m not doing any of that.” 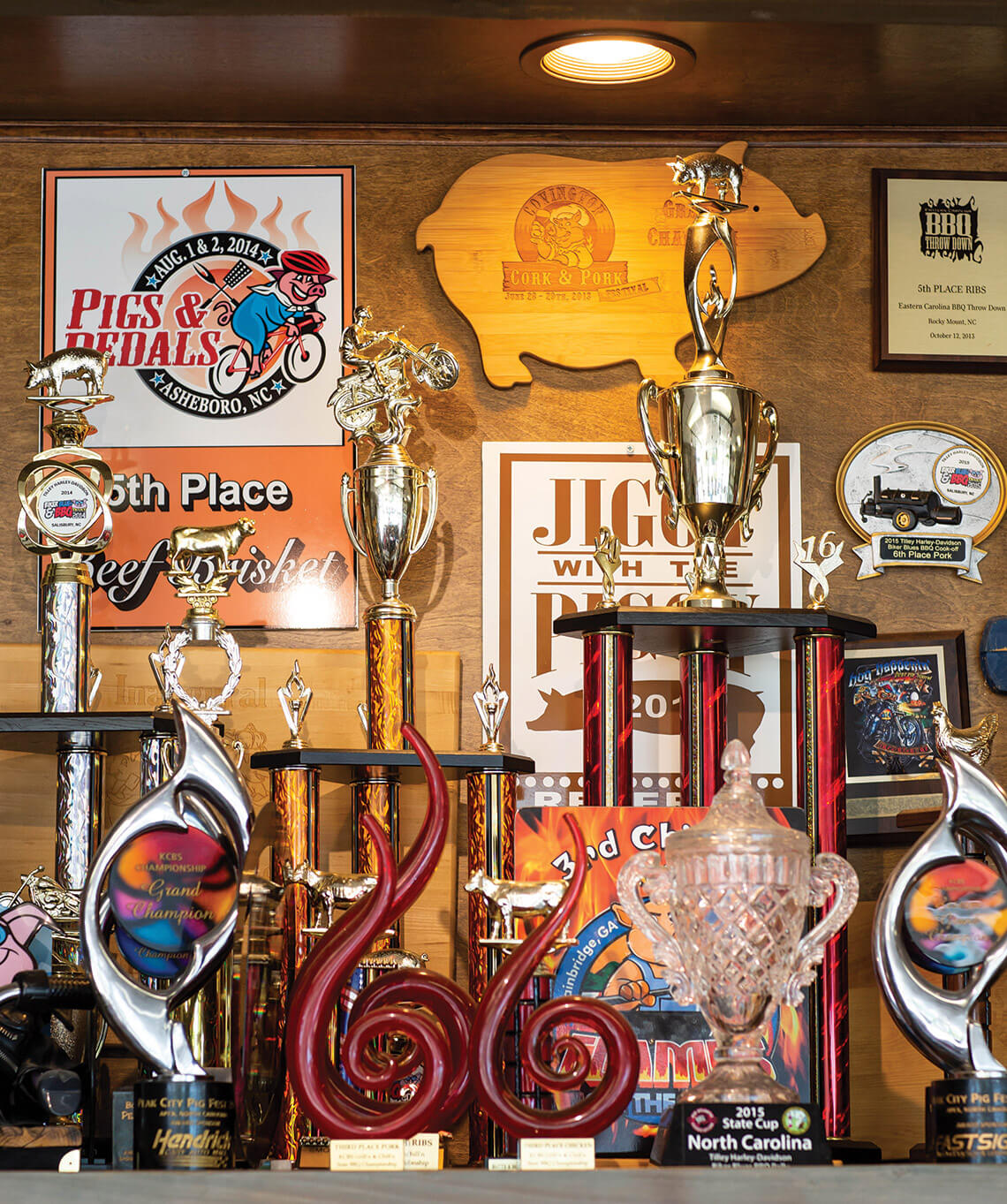 Jerry Stephenson and his sister, Roxanne Manley are considered first-order royalty in the highly impassioned world of competitive barbecue. photograph by Tim Robison

What he’s doing is slow-smoking prime cuts of pork, chicken, beef brisket, turkey, and link sausage based on his award-winning cuisine in the rarefied air of competitive barbecue cooking. Stephenson and his sister, Roxanne Manley, make up the Redneck Scientific barbecue team, considered first-order royalty in the highly impassioned world of competitive barbecue. Together, they’ve won 24 Grand Championships and 20 Reserve Grand Championships in Kansas City Barbeque Society competitions. They’ve fired up the smokers and the judges at the Jack Daniel’s World Championship Invitational Barbecue and the American Royal World Series of Barbecue. While Stephenson handles the smokers, Manley specializes in desserts and side dishes — she’s won world championships for her beans, potatoes, and vegetable recipes, and top awards for desserts. In a single competition, they might go brisket to brisket with hundreds of teams from around the world.

“It’s just been unimaginable,” Stephenson says, shaking his head. “Just me and my sister — how cool is that? We get to share who we are and where we’re from. It’s been an incredible gift.”

And one he’s sharing with growing crowds in Johnston County — and soon to be Wake County, as The Redneck BBQ Lab is about to open its second location, in Raleigh’s North Hills district.

At The Redneck BBQ Lab HQ in Johnston County — Stephenson’s official corporate title is Chief Redneck in Charge — the first of the chicken and ribs go into the smokers at 5 in the morning. It’s an early start, Stephenson says, but it’s a necessity. They’ll run out of those first chickens and ribs by midafternoon. A second run hits the heat at 11 a.m., bound for supper plates. By then, the pork has already been smoking for an hour. At 3 p.m., beef briskets head to the Redneck BBQ Lab day spa for their own hours-long deep-tissue smoke session.

Stephenson uses the same sauces, rubs, charcoal, and wood that he and his sister use at competitions. Hickory lends the meat its signature smoky flavor. Cherry dials back the bite and gives the meat “that little kiss of red that makes it pretty,” he says. There are no commercial rubs or sauces. Everything is made on-site, and nothing is frozen or held for the next day. That approach extends to the side dishes — there are hand-stripped collards and turnips grown just down the road; cornbread from a custom-milled recipe that Stephenson developed with Atkinson Milling Company in nearby Selma; and bread-and-butter pickles straight from his Aunt Myrt’s 100-year-old recipe. “Customers get everything we do in a real competition except the performance,” he says.

And Stephenson is no stranger to pig-centric performance. He was raised in Onslow County, in a world of Southern manners. Growing up in Jacksonville, “it was Mr. This and Mrs. That — a solid country upbringing,” he says. “And we cooked whole-hog barbecue because I was from eastern North Carolina, and that’s just what you do.” 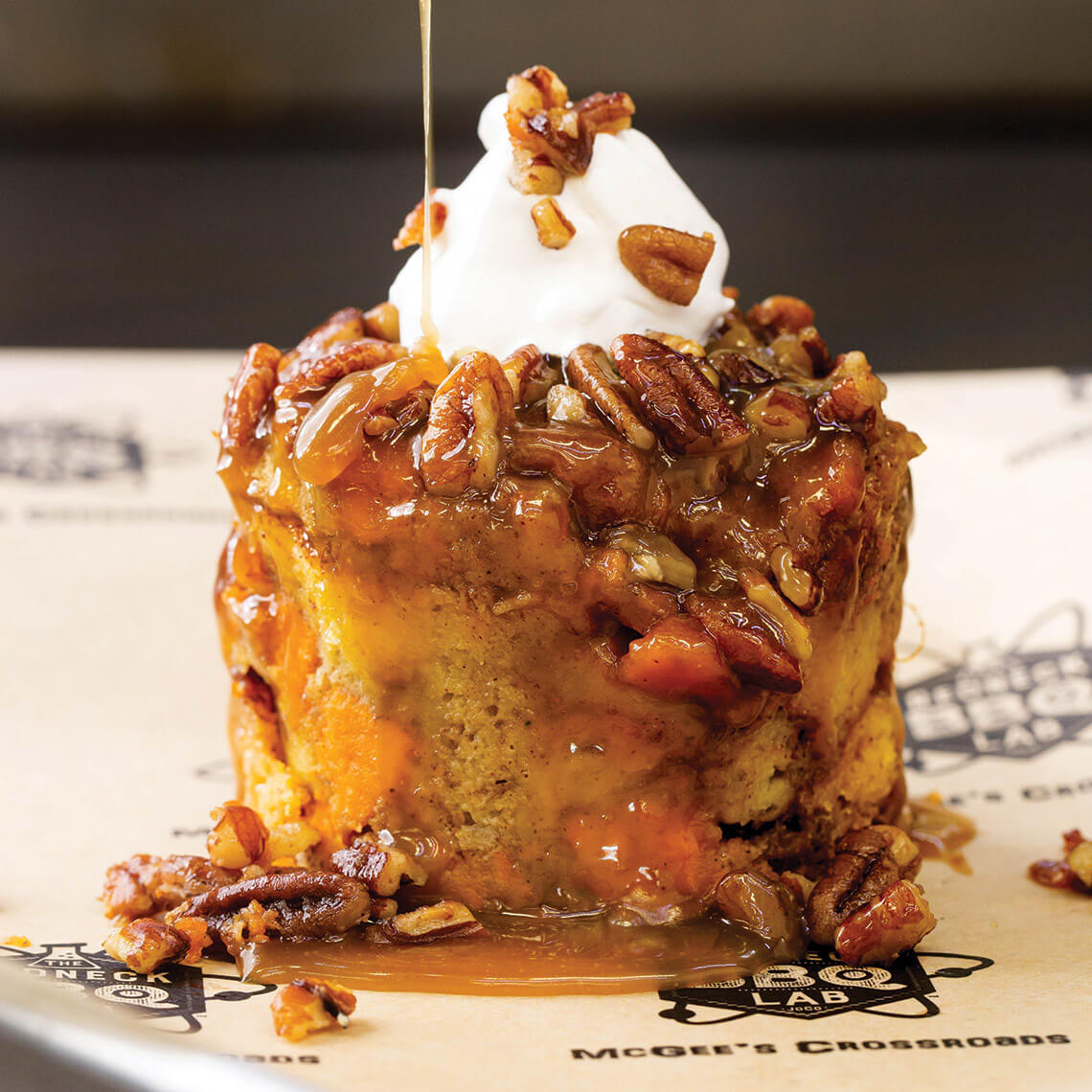 Visitors cap off their meal with Manley’s bread pudding. photograph by Tim Robison

In college at East Carolina University, where he earned three degrees including a master’s in psychology, Stephenson cooked for campus parties and tailgates, and even trademarked a grill design using a 55-gallon metal drum configured to customize a backdraft oxygen flow. The grills were so efficient that he could load them into his pickup truck and drive down the highway with the meat cooking on the way. “We’d roll up at whatever party we were catering, and people would holler out, ‘Look at these bunch of rednecks with their trash cans on fire.’ But once we pulled out the food, there wasn’t much talking because all they would do was fight to get in line.”

At ECU, Stephenson also worked for a psychology professor who took him under his wing in a life-changing way. “He said, ‘I’m going to show you how we do applied science here at ECU,’ ” Stephenson says, reveling in the story. “And then he showed me how to make beer! That was the start of it all. Through his scientific approach to brewing beer, I learned how data was collected and used and studied, and how to look for patterns and concrete evidence that what we were doing worked, and why. And more importantly, how to replicate success.”

Years later, when he entered the competitive barbecue circuit, Stephenson carried that databased approach with him. He weighs each ingredient in grams. He has documented every pound of meat that has ever gone into his smokers. “We are extremely detail-oriented,” he says. “It’s no joke that we call ourselves a barbecue laboratory. It’s not ‘a dash of this or that.’ It’s all based on what I learned from applied science.” 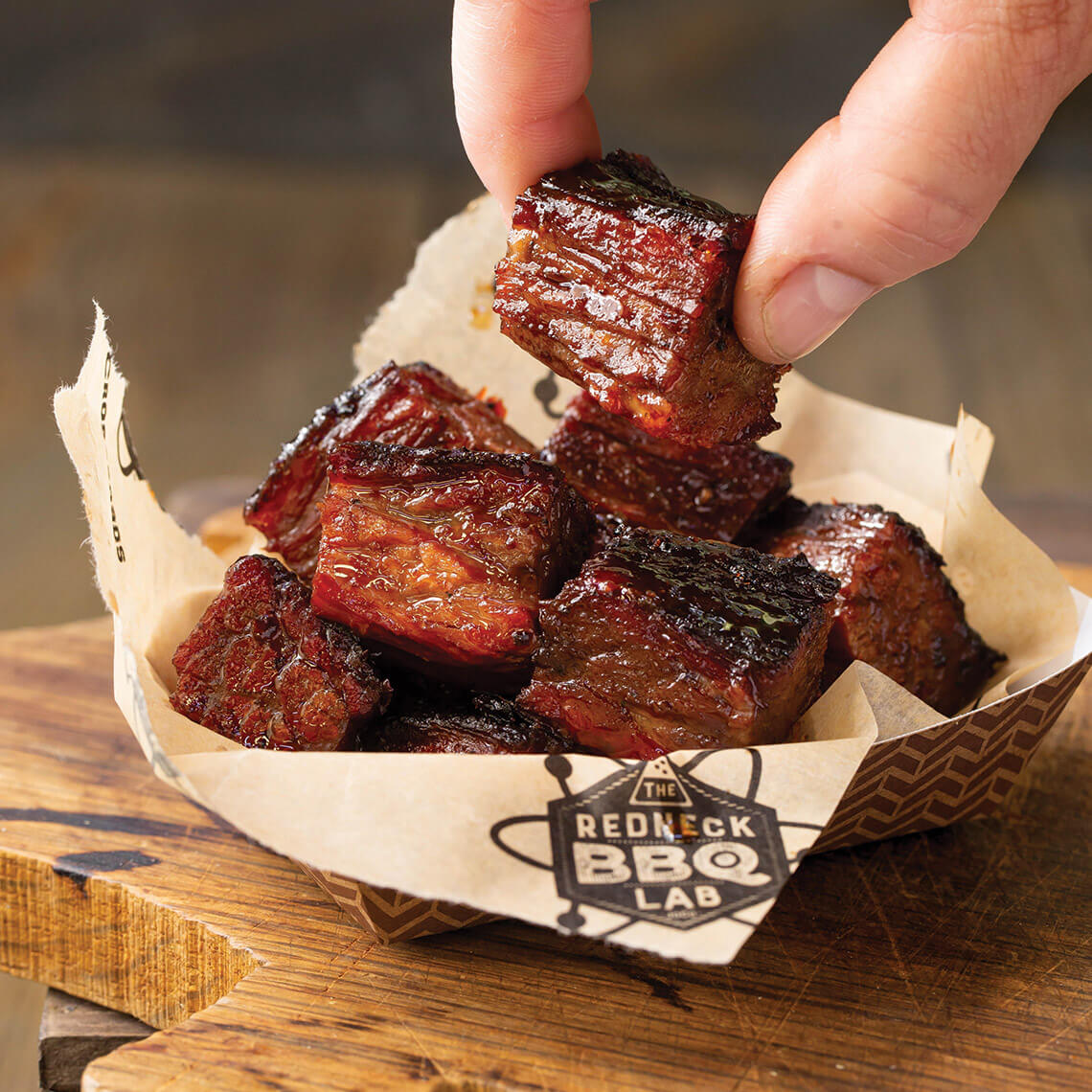 Those in the know visit Redneck BBQ on Tuesdays, Thursdays, and Saturdays for the tender “burnt ends” of Stephenson’s award-winning brisket. photograph by Tim Robison

But like a science lab, in the world of competitive barbecue, so much of the magic takes place behind a curtain. Certified judges in a tent do the taste-testing. Spectators, Stephenson explains, “can see the meat on the grill and smell it cooking, but they can’t taste it. They can’t even see it when we put it in the box for the judges, and how meticulously we style each presentation! It drives people crazy, and that’s one aspect of barbecue competitions that really bugged me.”

He’s bugged no longer. At Redneck BBQ, the veil is lifted. And you’d better get there early. Every day is busy, but weekends are crazy. “On Saturdays, it’s a beautiful circus here,” Stephenson warns. “There will be a line. You will have to wait. We might run out of food. But what we cook that day goes out the door that day, and I’d rather disappoint you by running out of food than disappoint you with food that isn’t my best. When you eat my brisket or my double-sauced and double-smoked burnt ends, I want you to hear angels singing.”