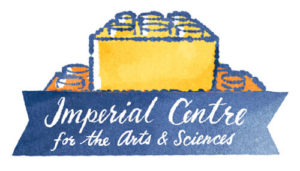 When it comes to building blocks, I’m a bit of an expert. So I’m not surprised to catch my 7-year-old daughter, Oona, stealing peeks at the eight-wheeled contraption I’m building at the Drag Race station in the “Bricksburg” hands-on exhibit at the Imperial Centre for the Arts & Sciences. It is pretty impressive, if I do say so myself.

When Oona brings her modest attempt at a dragster over to where I’m working, I’m prepared to impress her with an impromptu physics lesson — inertia and resistance and all that stuff.

“You should build them small so they’re easier to put back together when they break,” she says bluntly.

Then, in our race down the exhibit’s drag strip … my masterpiece disintegrates. Lesson learned.

The Imperial Centre in Rocky Mount is all about discovery and always has been. In 1999, after Hurricane Floyd destroyed the city’s children’s museum, art center, and its playhouse, the community discovered that the 130,000-square-foot former tobacco factory — complete with a 90-foottall smokestack — would make an ideal, and dry, home for a state-of-the-art kids’ museum, arts center, and 300-seat theater. And today, I’ve discovered that Oona knows more about everything here than I do — and she’s very happy to share her knowledge.

After a lap around the eight activity tables that compose “Bricksburg” — on display through the summer on the first floor of the kids’ museum — we head upstairs for a crash course in foam mega-block construction, a subject of which I don’t even pretend to have any knowledge. 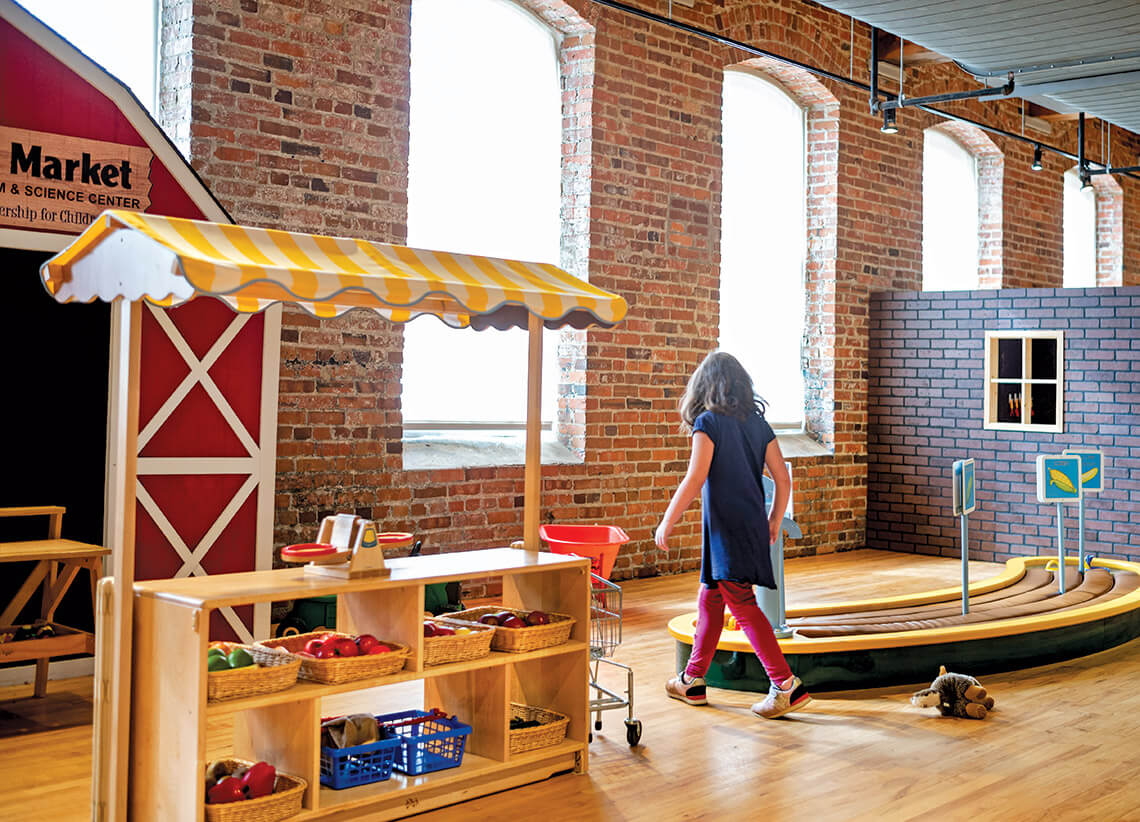 The writer’s daughter Oona explores the Imperial Centre’s farmers market space. In addition to comparing the weights of tomatoes and apples and strawberries, she also mastered the art of selling plastic veggies to her dad. photograph by Charles Harris

“What are you building?” I ask.

“Well, something big,” Oona says, thankfully omitting the “duh” from the end of her response.

Turns out, she’s building a giant chair — so I can sit down out of the way of her building project.

From there, she heads to the bee exhibit to organize the plush versions of eggs, larvae, pupae, and adult bees in their respective honeycomb cells. (Note to self: Maybe she’ll organize her stuffed animals at home if we get her a giant honeycomb.)

And then it’s on to a kid-size gauntlet of sets for make-believe role-playing — from a farmers market to a puppet castle to a doctor’s office complete with a vision chart and waiting room.

“Let’s measure your BMI!” she squeals.

“Let’s go check out the Live Animal Gallery,” I reply.

We quickly discover that the biggest challenge at the Imperial Centre is budgeting our time. Local kids have the advantage of being able to visit with their class or to attend summer camp here, or to come with their families on Sunday, when admission is free for Rocky Mount residents. But out-of-towners like us need to make the most of every minute and not spend too much time playing — I mean learning about the cyclone spinning in the tornado machine or the vacuum-tube situation that sends balls whizzing through a labyrinth of clear pipes. (Yes, the balls can get stuck, and yes, the staff has a special tool to get them unstuck. And, no, don’t ask how I know this.) 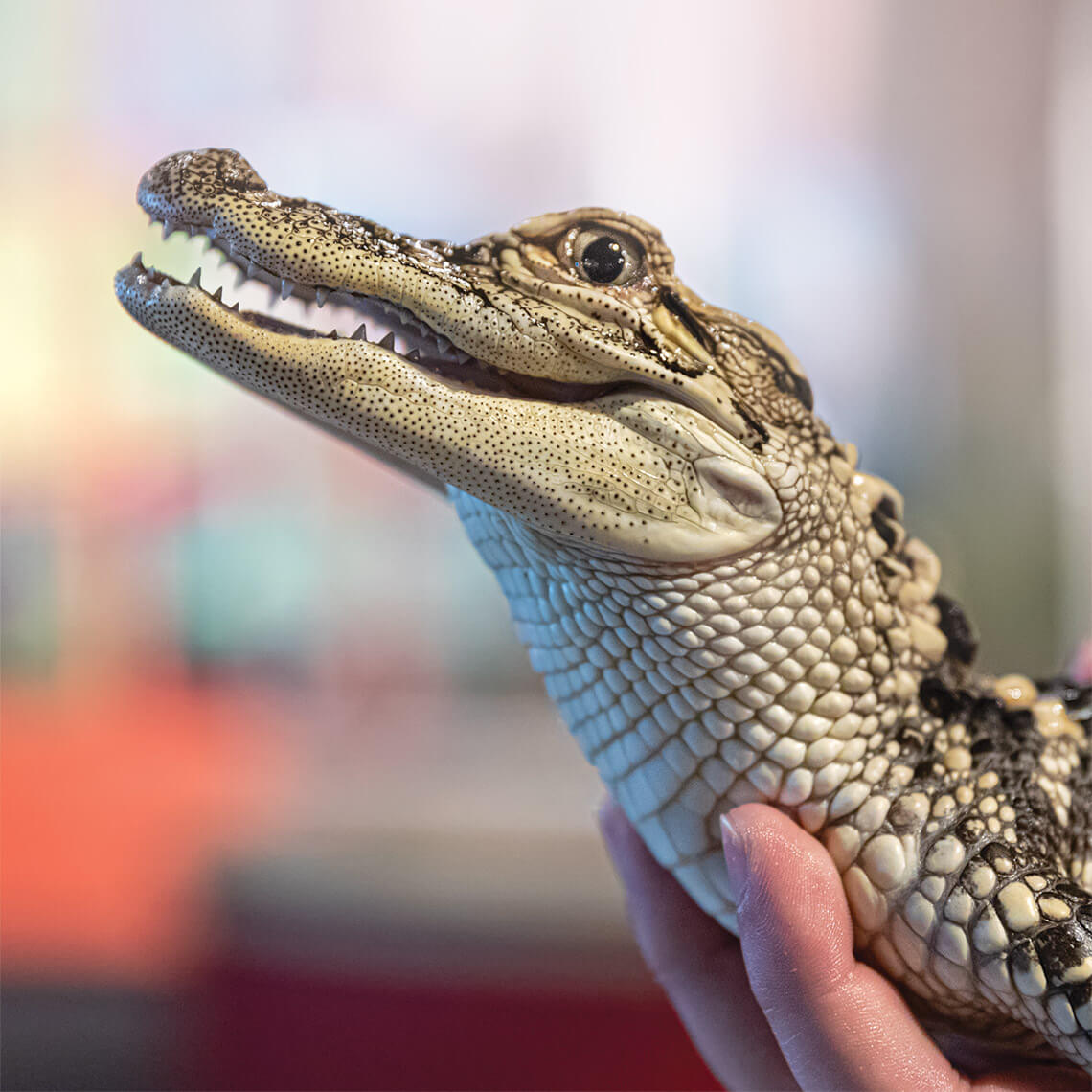 Meet Reptar, one of the Live Animal Gallery’s alligators. photograph by Charles Harris

One of the places where time seems to fly is the aforementioned Live Animal Gallery, the most popular attraction at the museum. Here, visitors learn about different habitats, the effect of pollution on the planet, and the diversity of plants and animals across North Carolina. But it’s the live animals that get kids excited — especially when a certain 7-year-old gets to feed the fish in the 2,800-gallon saltwater aquarium and pet the resident alligator. (Yes, a museum assistant held the gator. No, Oona’s father did not pet said gator.)

An attraction that’s a big draw for the entire family is the Cummins Planetarium, with its ooh- and ahh-worthy seasonal stargazing shows and its comfy chairs that are a world away from the cacophony of excited kids just outside the doors.

At this point, one might think that a 7-year-old would be slowing down after interacting with every science exhibit at least once and trying all the hands-on activities that the kids’ museum has to offer — but one would be mistaken.

A place like the Imperial Centre taps into children’s energy reserves as much as their imaginations — which is a good thing, since we’ve only experienced half of what the facility has to offer.

The Arts Center, on the other side of the complex, provides gallery space for rotating exhibits and juried art shows, as well as inspiration for aspiring artists. Here, children can sprawl on the floor, sketching colorful versions of sculptures and photography created by artists from across North Carolina.

Oona finds coloring pages in an adjacent space that provides kids with opportunities to create their own art. Suddenly, time doesn’t matter quite as much; Oona will not be rushed while designing brightly colored ball gowns. But time is ticking away, I remind her, and if she wants one last go in “Bricksburg,” we need to leave soon.

With that, a familiar look of disappointment verging on a full pout begins to creep across her face. “Don’t worry, Oona,” I tell her. “We’ll be back. There’s still plenty more to discover.”