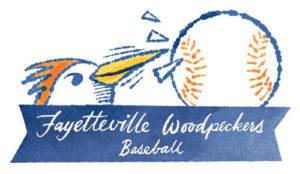 Growing up in Lenoir County, Jon Tyndall’s love of baseball took root on summer nights alongside his father in the wooden seats of Kinston’s Grainger Stadium. Now, Tyndall is planting the seeds for his teenage daughter, Karissa, to develop a similar affection for the game in Fayetteville. “I’m not having the same results, to be honest,” he says. “She’s not a baseball person yet.” But Tyndall, who lives in the nearby Cumberland County community of Stedman, notes that whenever he asks Karissa to go to a Fayetteville Woodpeckers game, she gives an enthusiastic yes. “I think we’ll get there,” he says.

In baseball, as in everything, relationships grow over time. For the Woodpeckers and Fayetteville, time isn’t something they’ve had a lot of. A Low-A affiliate of the Houston Astros, the Woodpeckers were born when the Carolina League expanded in 2017. For its first two seasons, the team played as the Buies Creek Astros at Campbell University while its permanent home, Segra Stadium, rose from what was a weathered parking lot on the western edge of downtown Fayetteville. 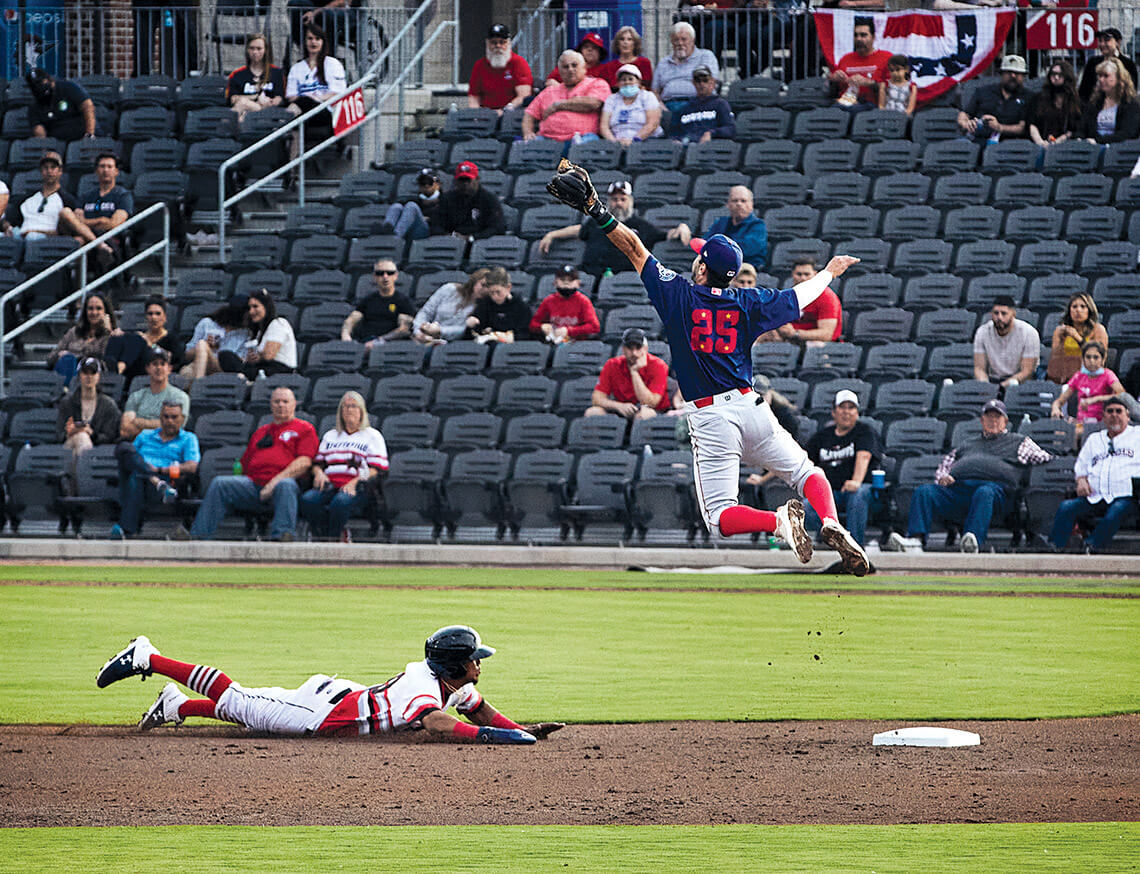 The Woodpeckers steal second during their 2021 home opener. photograph by Alex Boerner

Roughly 250,000 fans passed through the stadium during the Woodpeckers’ giddy first summer in 2019. Then the pandemic wiped out the 2020 campaign, meaning that the city’s relationship with the team is still relatively new. But with each fond memory created on game nights, that bond grows stronger. A more recent memory happened during the Woodpeckers’ 2021 home opener in May, which found the team defeating the Kannapolis Cannon Ballers 10–1 at a sold-out Segra Stadium.

Tyndall’s favorite Woodpeckers memory is of Karissa and her Girl Scout troop getting to camp on the field after a game. Another Woodpeckers fan, Ivan Williams, who works in IT at Fayetteville State University, fondly remembers running into old friends on the stadium concourse and in the stands. “I didn’t realize I knew that many people until I started going to baseball games,” he says. And Fayetteville resident Franco Webb still chuckles about the night his buddy Teddy proposed to his girlfriend, Tori, between innings atop the home dugout. “It’s important to have these touchstones,” Webb says. “You want to go to games and be able to say, ‘Hey, remember when …?’” 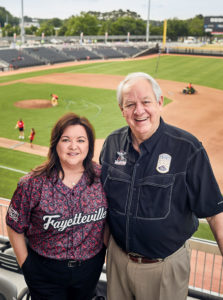 Fayetteville has a colorful, albeit fleeting, professional baseball past, but there are precious few tangible reminders of that history. The Cape Fear Fairgrounds, where the short-lived Fayetteville Highlanders played a century ago, is now the North Carolina Department of Transportation’s Highway Division 6 Headquarters. It’s also where, legend has it, the first professional home run hit by Babe Ruth splashed down in a nearby millpond. In the 1940s, Pittman Stadium — initially Cumberland Memorial Stadium — was built on the northwestern outskirts of the city and briefly hosted teams named the Athletics, Cubs, Highlanders, and Scotties. It’s now a Ford dealership off busy Bragg Boulevard. From 1987 to 2000, J.P. Riddle Stadium, which still sits among pines and parking lots on the south side, provided 14 summers of minor league memories as home to the Class-A Fayetteville Generals and the Cape Fear Crocs. Fayetteville Technical Community College plays there now.

That history was on the minds of city leaders, who, when negotiating Fayetteville’s agreement with the Astros, won a guarantee that the team would stay at Segra for at least 30 years. “We wanted this to be a lifetime investment,” says former city council member Jim Arp, who worked on the deal. “We want kids who live here to stay in Fayetteville and one day bring their kids to games.”

On game nights, Segra Stadium — named a “Ballpark of the Decade” by Ballpark Digest — is full of life. “It’s a great atmosphere,” says Fayetteville Mayor Mitch Colvin, who chaired the city council’s baseball committee. “There’s so much going on in addition to the baseball.” Indeed, the right-field patio bar stays buzzing with Foosball, cornhole, and live music. Kids burn off energy in the play area and on the grassy hill beyond left field. In between, rows of rocking chairs beckon those who just want to sit. And with rail tracks running along two sides of the stadium, passing trains compete for fans’ attention. “To see this energy in downtown Fayetteville, at what was a parking lot just a few years ago — it’s wonderful,” says Fayetteville native George Breece, who bought the very first season tickets. 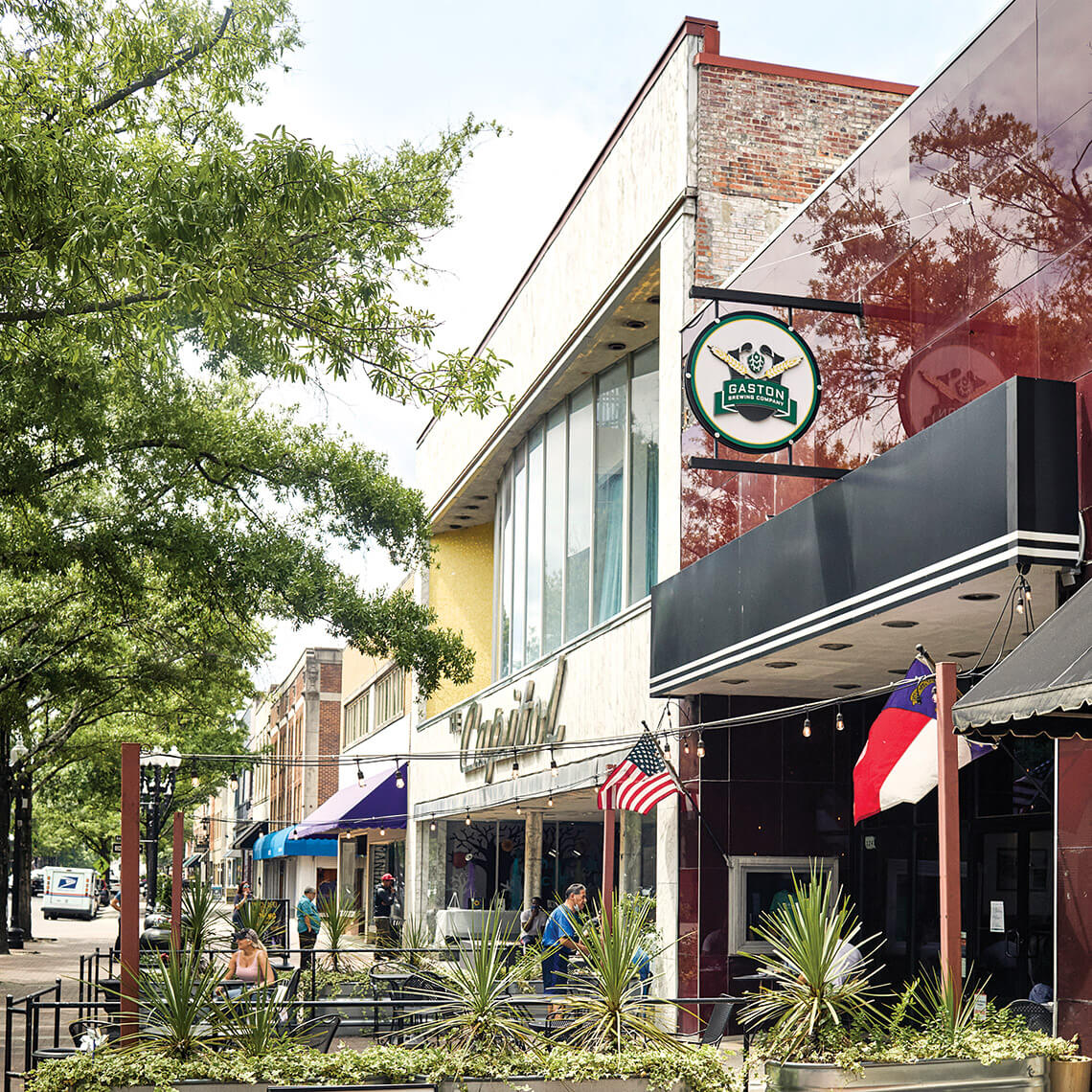 Segra Stadium is just a short walk from downtown’s bars and restaurants. photograph by Alex Boerner

That energy extends beyond the stadium. Next door, the once-derelict Prince Charles Hotel, a landmark since the ’20s, now features luxury apartments and a gourmet coffee shop. Nearby restaurants, breweries, and shops have led Fayetteville residents and visitors to rediscover downtown. Breece, who lives near the downtown area, rarely misses a game. But on the few weekend nights that he does, he loves hearing the booms of Segra Stadium’s postgame fireworks. They mark the end of another night of Woodpeckers baseball, another fresh set of memories made for a city and a team that will be together for years to come.