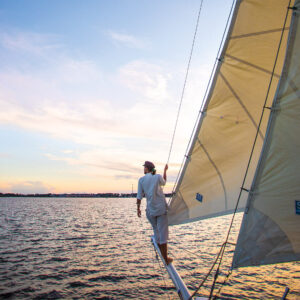 Downeast Rover Mate Ethan Atkinson balances on the bowsprit, watching for crab pots that could become entangled with the boat. photograph by Chris Hannant

Wind whips the sails of the 55-foot topsail schooner Downeast Rover, propelling it forward as dolphins play in its wake. Capt. Kim Winslow steers the boat through Roanoke Sound, pointing out the top of the Wright Brothers National Memorial in Kill Devil Hills while taking advantage of the very same conditions that benefited Orville and Wilbur’s flight experiments. “The Outer Banks is perfect for one very good reason: the wind,” says Winslow, who owns the boat with his wife, Kimberly. “There is almost always a good wind, which means we really can sail.” 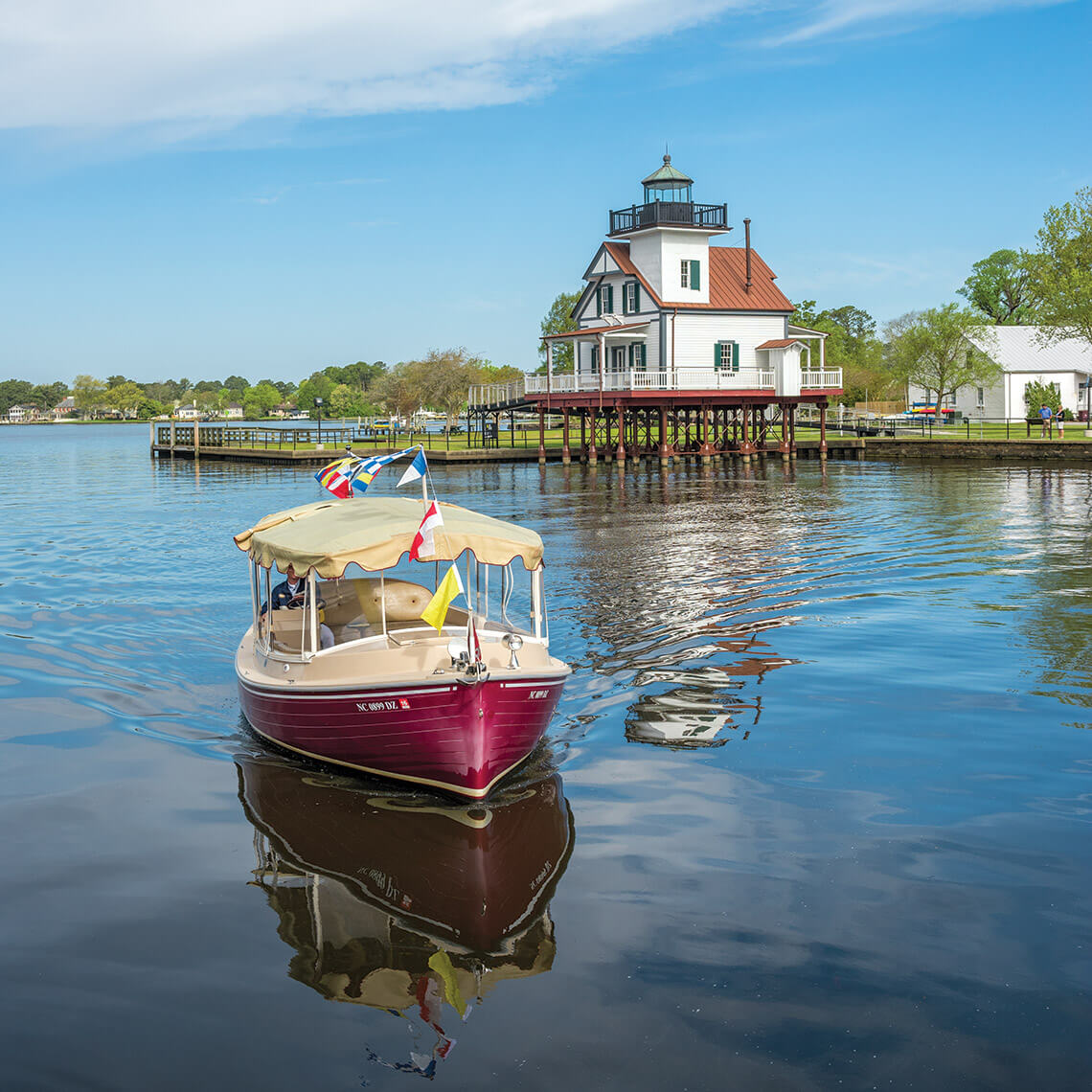 The Liber-Tea sets out from near the Roanoke River Lighthouse and the former home of Penelope Barker, whose 1774 boycott of British goods — aka the Edenton Tea Party — inspired the boat’s name. photograph by Emily Chaplin and Chris Council

Gliding along the Edenton waterfront, Capt. Mark Thesier points out the 1767 Chowan County Courthouse, the oldest in North Carolina; the 1886 Roanoke River Lighthouse, the only remaining screw-pile lighthouse in the state; and John’s Island, a privately owned nature preserve. The quiet electric motor of the Liber-Tea, owned by Thesier and his wife, Theresa, allows him to keep a conversational volume while sharing historical facts and stories with his passengers. Other than his occasional narration, he says, “the only thing you hear as we’re cruising along is the ripple of the water.” And maybe the occasional honk from his conch shell, which the Coast Guard has approved as one of the boat’s official horns. 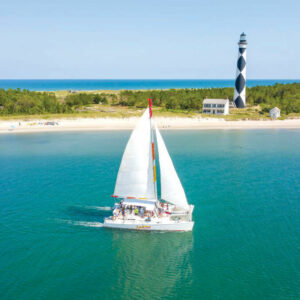 The Lookout catamaran motors about an eighth of a mile out from the Beaufort waterfront to a spot behind the dunes, where the first mate asks for volunteers to pull up the sails. It takes two, three, sometimes four people to raise the 150-pound mainsail and the jib — or front sail — while the other passengers cheer them on. From there, it’s off to wherever the wind takes them. “We don’t have a destination,” says Capt. Steve Bishop. Depending on the conditions of the wind and water, the Lookout might sail behind the maritime forest and dunes of Shackleford Banks — often offering a glimpse of wild horses — or, in calmer weather, out to the ocean. There, Bishop points out Fort Macon, constructed after the War of 1812 and established as a state park in 1924, and the site of the wreck of what is believed to be the Queen Anne’s Revenge — Blackbeard’s flagship.

Capt. Tim Simpson expertly navigates the Lady Swan through the marshy waters of West Channel, startling a great blue heron out of its hiding place among the tall grass. Neon green in the summer sun, the blades sway back and forth, dancing in the warm breeze. During low tide, the grass teems with life, as the shallow water reveals oysters clinging to reefs at the base of the vegetation and fiddler crabs scurrying between the stalks. Simpson steers his pontoon boat past Huggins Island toward Bear Island — both part of Hammocks Beach State Park. Thanks to the presence of the park, which limits development, this area is full of unspoiled beauty, and Simpson and his wife and first mate, Jane, stress the importance of being good stewards of the environment. On one cruise, the couple even rescued an endangered Kemp’s ridley, disentangling the sea turtle from a fishing line and releasing it back into the water.

The La Dee Dah keeps a relaxed pace as it travels from its departure point at Motts Channel Seafood — a 32-year-old fish house in Wrightsville Beach — through its two-hour, 10-mile journey. It moves along the Intracoastal Waterway and other local waterways and sounds, past Masonboro and Harbor islands. Capt. Axel Erkes inherited his love of the water from his dad, who always had a boat around for his sons when they were growing up. Erkes shared that love with his first mate and wife, Patti, during their courtship, and, after taking sunset cruises on vacations, the couple was inspired to offer a similar service back home. “Most people who visit never get to see Wrightsville Beach from the water, which is a whole different perspective,” he says. The pair love to hear passengers’ stories — if you come as a couple, be prepared to explain how you met — and tell a few of their own along the way, including the history behind their 1987 Downeast picnic cruiser. On the return trip, the sun slides below the tree line, casting a pearlescent shimmer of orange and pink across the teal water.

Related Video: Feel the waves beneath you and the wind in your hair as writer Susan Stafford Kelly sets sail.