The weaving room at Penland is inviting, all warm wood paneling and wide windows that look out onto the mountains beyond. When Lucy Morgan started this school in 1929, she built on Appalachian weaving traditions, creating a cottage industry to help local women earn a living. Over the years, Penland has grown into a haven for artists; across campus, students come to learn from visiting instructors and master craftspeople in immersive workshops on shaping metal, wood, glass, clay, and more. But it all began with Morgan and her weavers. “We have a lot of pride here in this department, knowing that the school started with textiles,” says studio coordinator Sarita Westrup. Their building, called Lily Loom House, was built in the late 1940s, and the mountain view is an important part of its design. “It’s really glorious,” Westrup says. “A lot of the work that people do when they come here ends up being inspired by the landscape.” 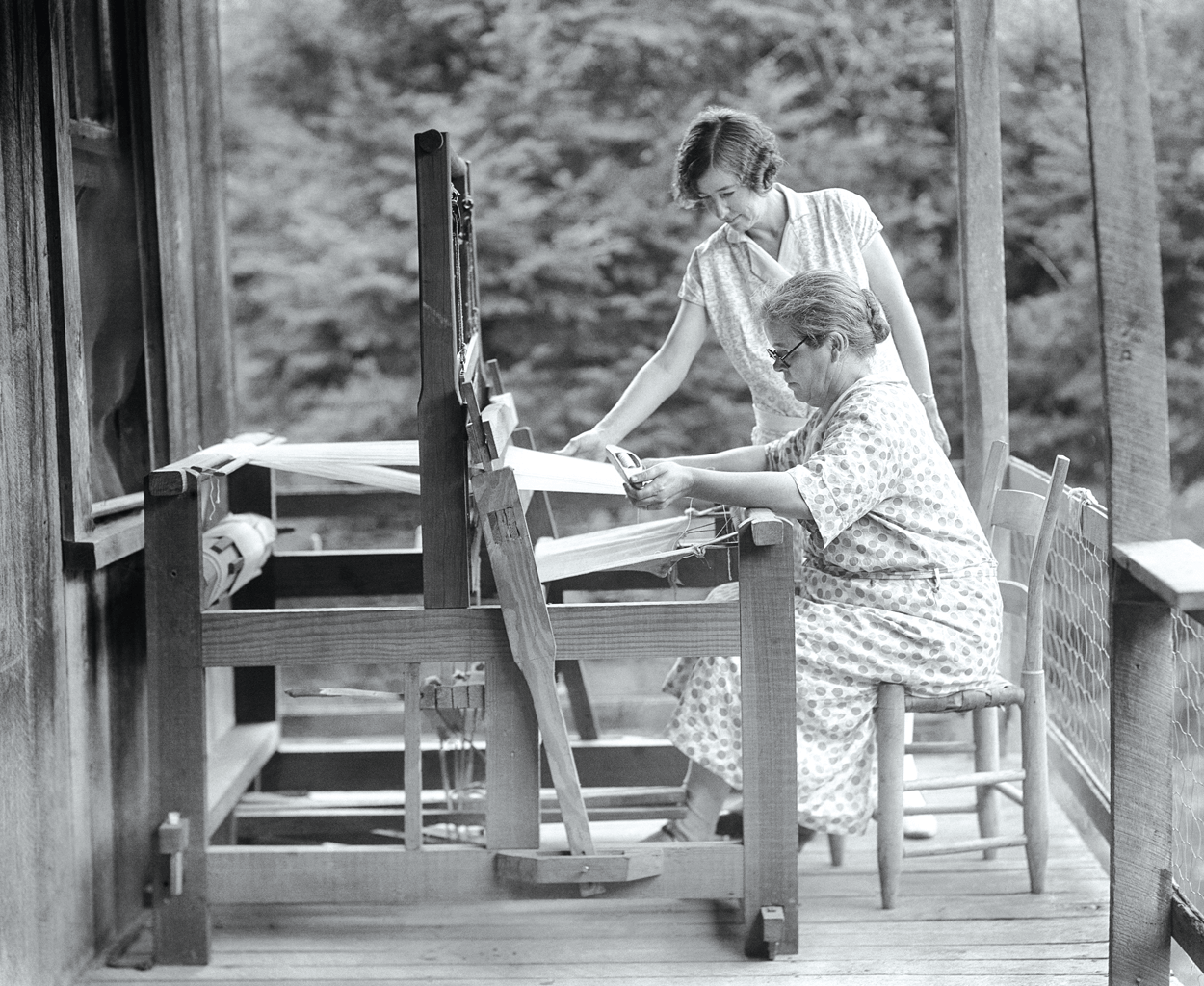 Before weavers sit down in front of Penland’s 50-year-old Macomber looms, they might carry their warps to the well-appointed dye kitchen upstairs. Many have a special interest in natural dyes like indigo. “That’s when color has a story,” Westrup says. “When it comes from a plant or a bug, it adds value or a sense of place to that dye. And it’s magical. It feels like secrets are being revealed from plants.” 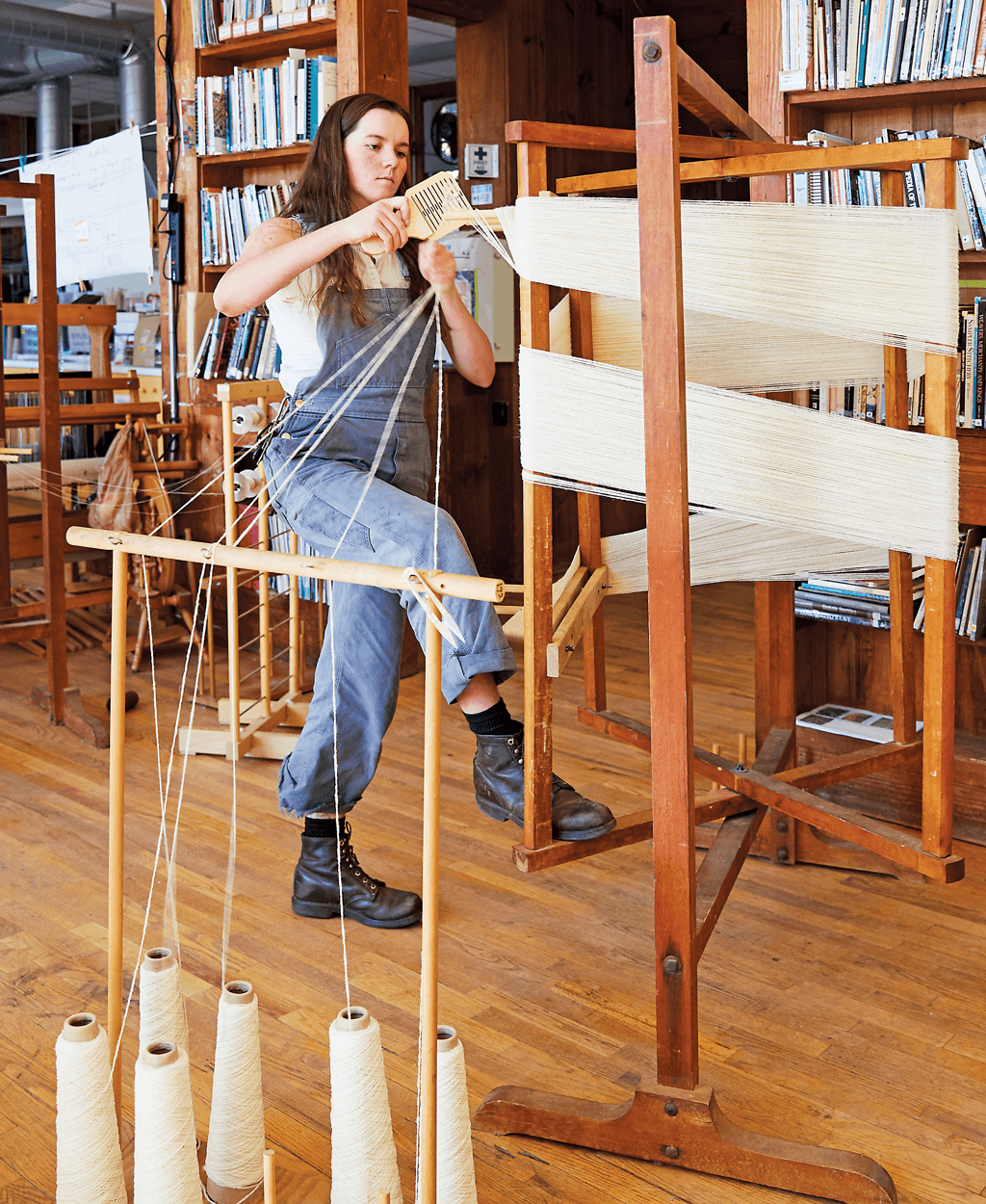 One of the first steps of weaving cloth is “winding the warp,” or measuring and organizing the threads that run lengthwise on a loom. Anastatia Spicer uses a warping mill: “It’s one of my favorite tools because it’s kind of like a dance,” she says.  photograph by Stacey Van Berkel 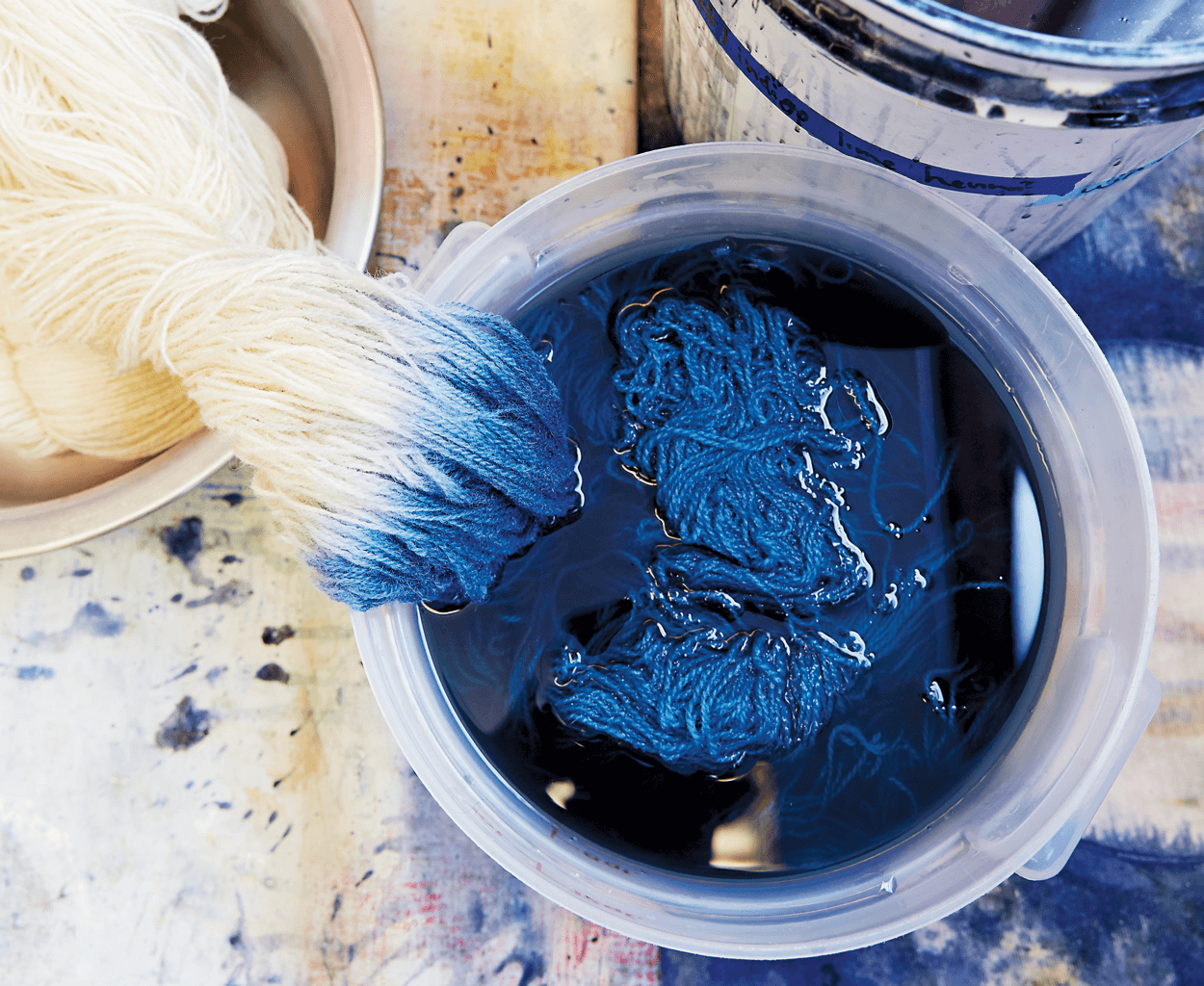 Spicer dipped her wool warp in an indigo vat. The brilliant blue dye is a product of fermentation.  photograph by Stacey Van Berkel

The futuristic building on Jupiter Road doesn’t look like a textile mill. But inside, there’s no mistaking the passion for handcrafts and natural fibers — wool, alpaca, silk, mohair, and organic cotton — that permeates this place. Nor the commitment to sustainability, from the solar panels on the roof to employees who are cross-trained to share duties on the sunny production floor. When founder Julie Jensen opened the mill in 2012, she intended to process fiber for small farmers. “She wanted to see a different future in the textile industry,” says Creative Director Grace Casey-Gouin, who, with Production Manager Amalia Fragoso-Eby, has helped expand Jensen’s vision into a line of blankets, scarves, yarns, and other products created with care for the earth. 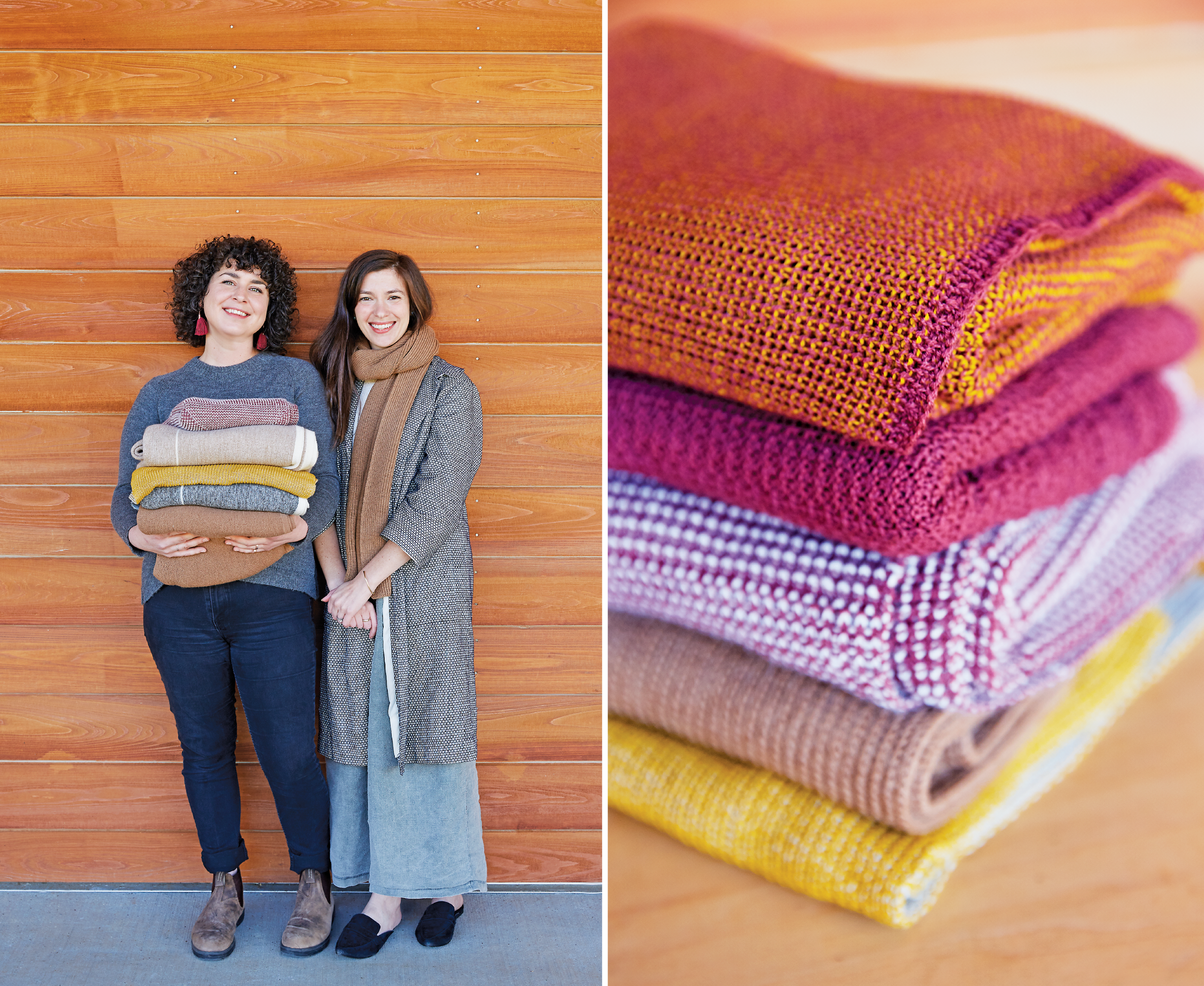 Amalia Fragoso-Eby (left) and Grace Casey-Gouin work together to polish Echoview’s product line and fill its storefront (opposite) with soul and style — “so that what you’re seeing reflects what’s in our hearts,” Casey-Gouin says.  photograph by Stacey Van Berkel

Growing up, Michael Montagne remembers the sound of rugs coming to life: His mother, Lyn, had a weaving studio upstairs, “so we’d hear her banging around on the looms all day,” he says, recalling the sound of the beater bar being pulled to tighten the weave. Family photos show a baby Michael surrounded by piles of wool in the Montagnes’ Atlanta home. “Not much has changed,” he says. “I still have piles of wool everywhere.” In 2015, when Lyn retired, Michael and his wife, Zuzana, took over the custom rug business that Lyn started in 1982, and moved the studio from Georgia to their new home in Bryson City. Lyn offers advice and still weaves the occasional rug, but she mostly creates her own tapestries now. Michael, meanwhile, works closely with interior designers to match their vision. After a client approves a “strike-off,” or a scale-size sample, he dyes the wool, cotton, or linen using just four colors — blue, red, gold, and black — adjusting the hue little by little to get it exactly right. “It’s basically like cooking,” he says. “I’m making color to taste.” 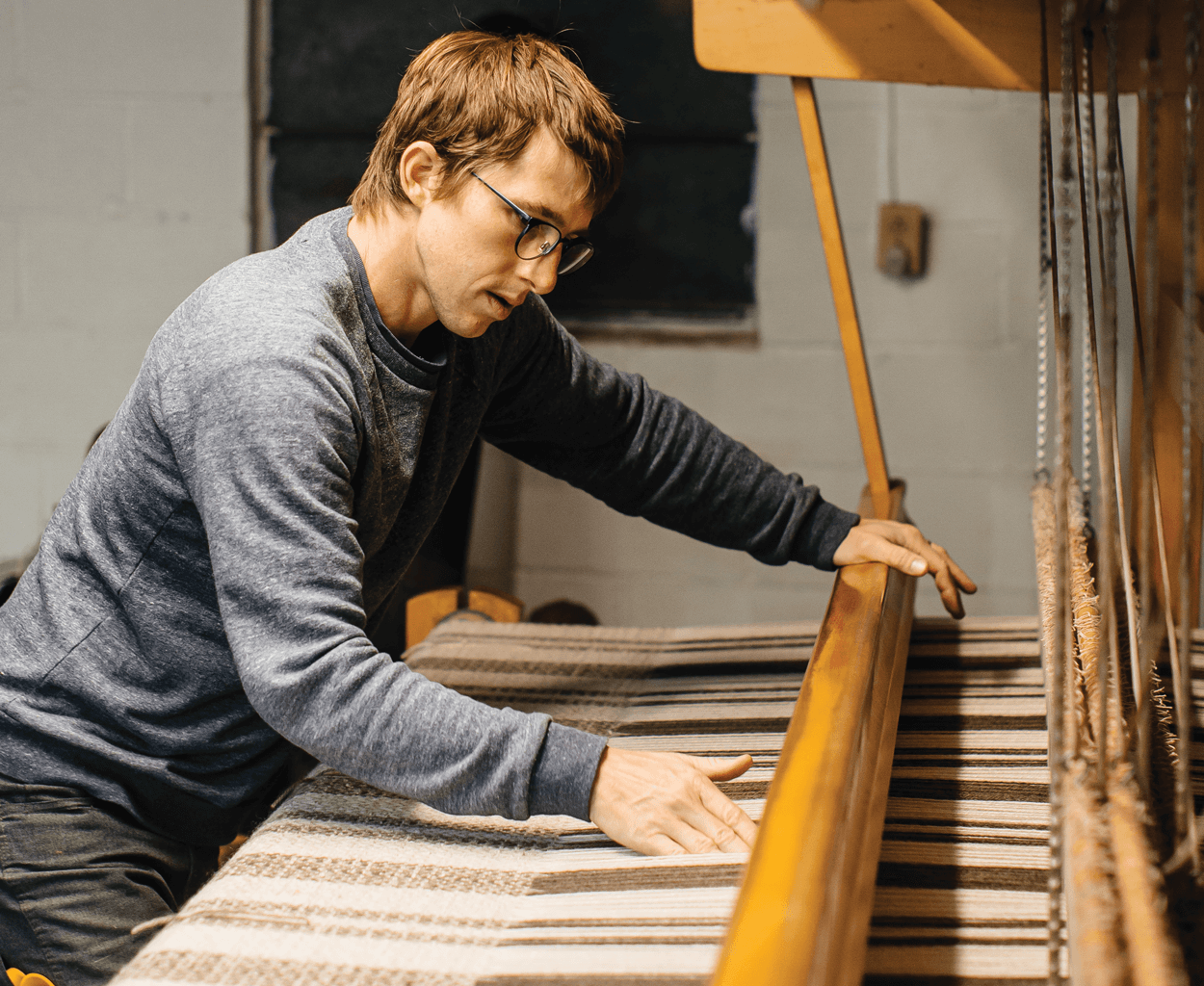 Michael Montagne’s studio holds several looms in different sizes, including one his mother got before Michael was born 35 years ago. It takes 10 to 12 weeks for him to weave a rug — one line at a time.  photograph by Stacey Van Berkel

The dye house is still now, its contents a time capsule from decades before. The cypress dye vats, the carding machine, even the giant coffee urn that fueled shifts at Biltmore Industries — all look nearly untouched since the company ceased operations in 1981. But for the first half of the 20th century, the Biltmore shops buzzed with activity. In 1901, instructors Eleanor Vance and Charlotte Yale began training local youths in woodcarving and, later, in weaving. Their venture coincided with the Arts and Crafts movement, which prized simple, handmade goods, and soon earned support from Edith Vanderbilt. The quality of Biltmore’s wool cloth made it famous well beyond state lines; by the late 1920s, about 100 skilled employees cleaned, dyed, and spun wool to produce 950 yards of fabric a day. 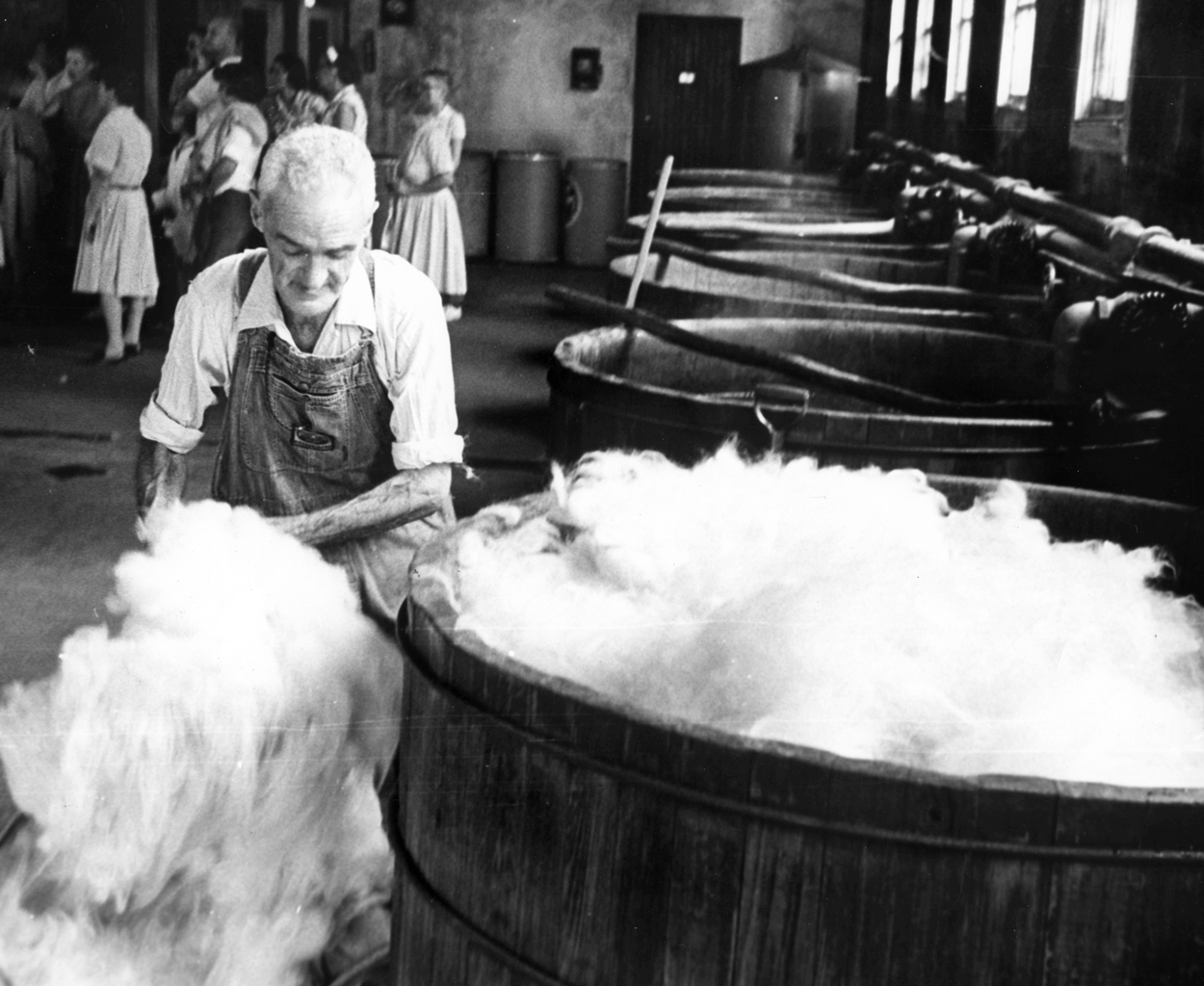 Visitors to The Omni Grove Park Inn often ask about Grovewood Village, the cluster of cottage-style buildings near the grand hotel. The two are no longer affiliated, but they have a shared history. In 1917, four years after construction of the Grove Park was complete, architect Fred Seely bought Biltmore Industries and moved it to the grounds of the inn he now managed. Seely was a savvy businessman: Guests were provided with books of fabric samples and could have a bespoke suit made during their stay. Word spread, and Biltmore Industries eventually counted among its fans Coolidges, Hoovers, and Roosevelts. Now, a museum, open April through December, tells the story of the fabric beloved by presidents and first ladies. 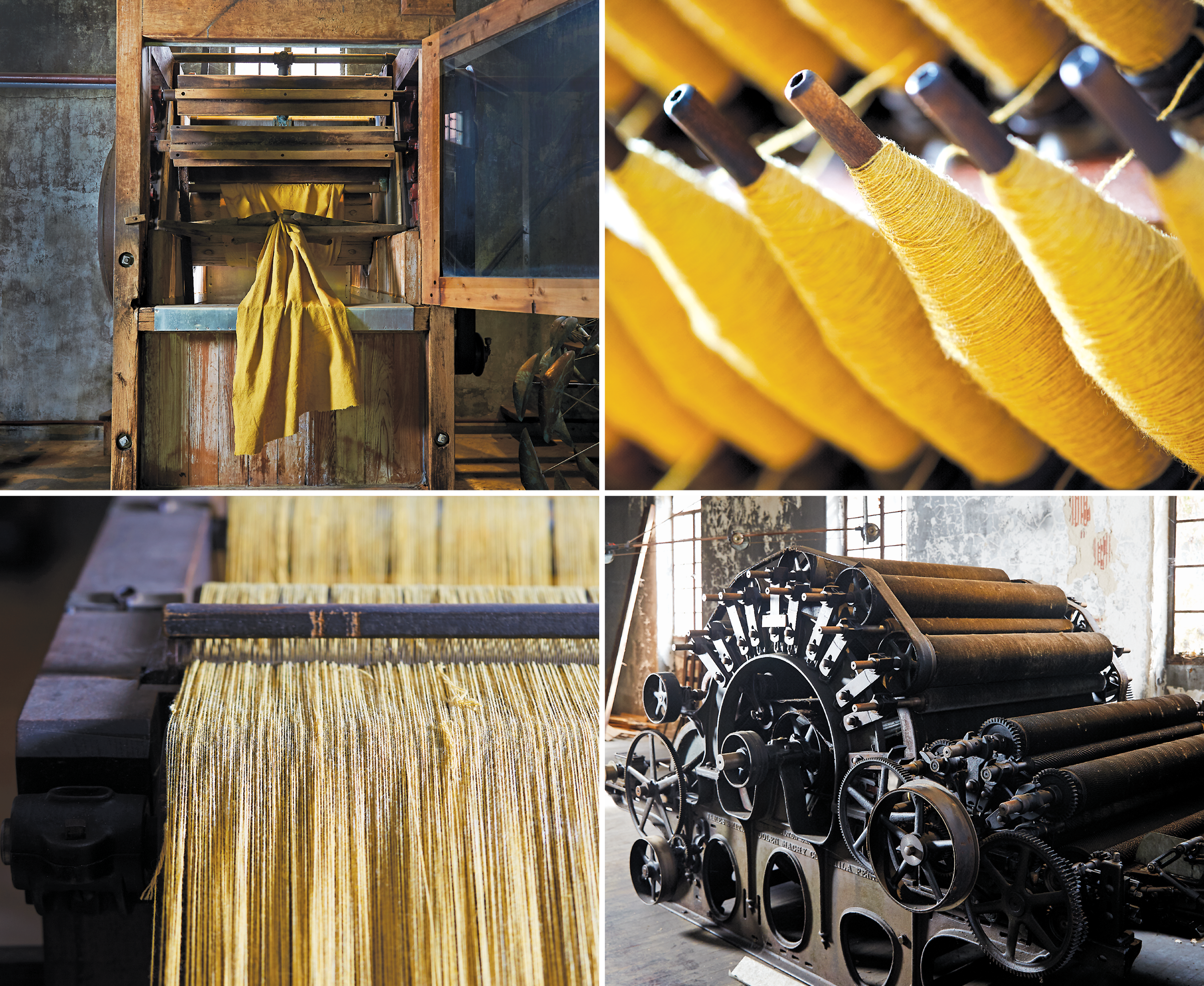 Grovewood Village tells the story of the fabric beloved by presidents and first ladies.  photograph by Stacey Van Berkel

A few generations ago, textiles were valued in the same way as gemstones and precious metals. That’s because people appreciated the time and effort that went into making them, Bethanne Knudson explains. In 2006, she and Stephan Michelson transformed a brick building — once a frozen vegetable packaging plant — into The Oriole Mill, a bright, stylish space they share with Libby O’Bryan (below), founder and president of Sew Co. Between the two companies, everything that’s sold in the mill’s store — aprons and tote bags, coverlets and throw pillows — is designed, woven, cut, and sewn just feet away. Having the whole process under one roof means that Knudson and her team can tinker with a design until it’s perfect. “Our goal is to produce that which never needs to be replaced,” Knudson says. “We think of a textile as an investment. There’s no reason why it can’t be passed down.” No wonder we call that an heirloom. 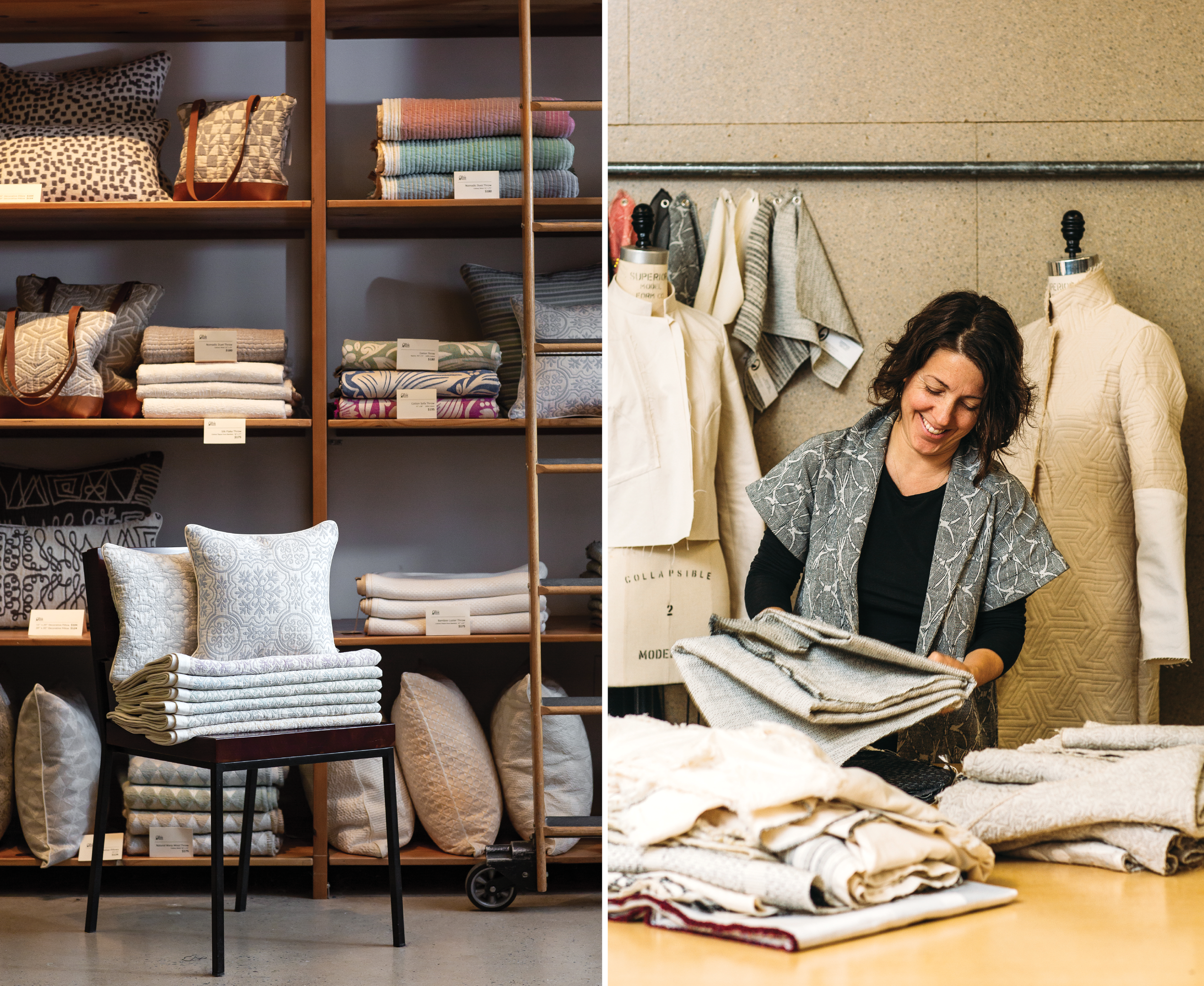 Everything that’s sold in the mill’s store is designed, woven, cut, and sewn just feet away.  photograph by Tim Robison