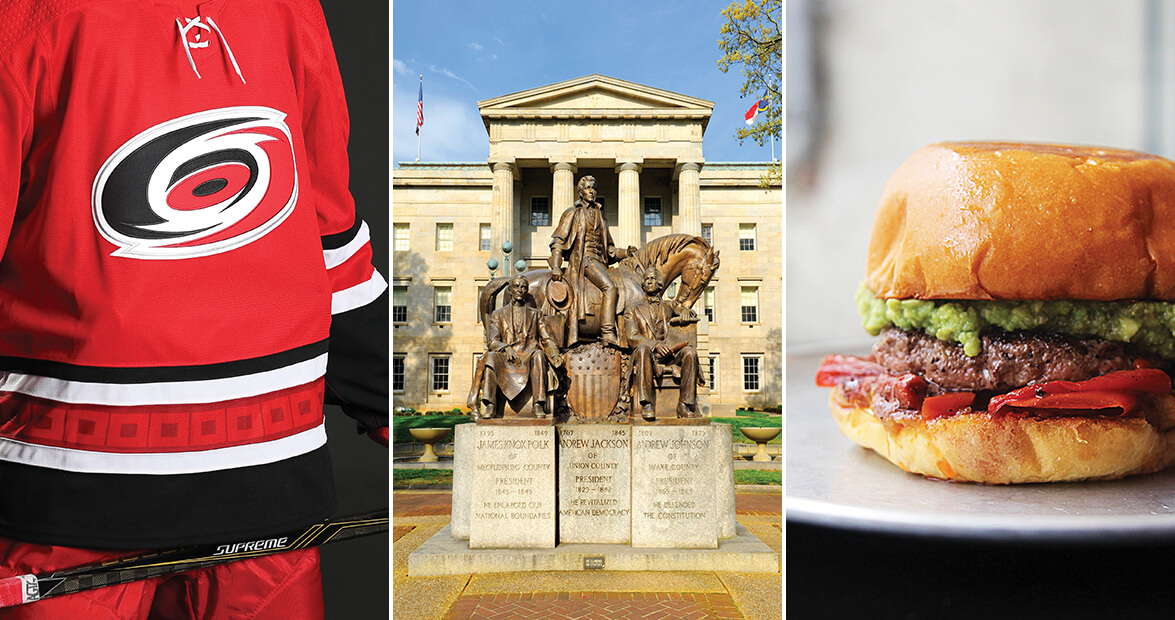 1. I started my tour of Raleigh next to the old Capitol building, where the three U.S. presidents born in North Carolina — Andrew Jackson, Andrew Johnson, and James K. Polk — are memorialized by a bronze statue. Problem is, Jackson may have actually been born in South Carolina, and Johnson was impeached. Polk, on the other hand, laid out four major goals for his presidency, achieved them all, and then did not run for re-election because he’d also promised to be a one-term president. Polk is also the only president to have his very own They Might Be Giants song.

2. Next, I found a hodgepodge of things at Briggs Hardware, from Chapel Hill Toffee to left-cut aviation snips. Also for sale: a plastic, kid-friendly toy chainsaw, complete with safety goggles. You know, for the tiny horror movie enthusiast in your life.

3. At Chuck’s downtown, you can order a can of Stroh’s at lunchtime, ironically or unironically. I tried the “High and Valley,” a hamburger with crushed avocado, bacon-onion jam, and blistered red peppers on top. Here’s how you know it’s good: When you hold it, the patty tries to slide out of the bun. It required a few precise rotations to eat, but I wanted to send the message that no burger escapes from my lunch alive.

4. My son is named Charlie, and after lunch, I found a nearby chocolate factory to take him to. Videri, located in an old train depot downtown, isn’t a factory factory; they make small batches of chocolate and serve up delicious cappuccinos. Nowhere to be found: a Wonkavator.

5. Later in the afternoon, I tasted beers at Trophy Brewing Co., where the tap handles are — wait for it — trophies. The pizzas deserve awards of their own. (One option, the “Local Celebrity,” boasts roasted North Carolina sweet corn and pulled pork.)

6. At Neomonde, I ate tabouli, hummus, and pita bread. This Mediterranean café-slash-market is so beloved that despite construction on the nearby rail line blocking nearly every practical route to get there, it was still packed at dinnertime. I’ve had their stuff before — Neomonde’s “I ate a salad at the [state] fair” sticker is prominently displayed on my desk.

7. The Carolina Hurricanes game I went to qualified as a gently international experience. For instance, one of the referees was named “Gord,” and I have never once met a man named “Gord” who was not from Canada. Also, someone was wearing an old Félix Potvin jersey in the nosebleed seats at PNC Arena, despite the fact that Potvin never played for either team. That’s like showing up at a black-tie affair wearing green.

8. Before the game, I took a quick walk through the newly renovated Ann and Jim Goodnight Museum Park at the North Carolina Museum of Art. They really did it up right, with large modernist sculptures (and a Vollis Simpson whirligig) positioned appropriately about. But my favorite part was the 20 gentle, undulating mounds with paths between them. Together, these little hills make up the “wave garden,” meant to resemble a calm, green ocean. You almost have to step back to see it. It’s nice, in a city that’s often so frantic, to be around something so subtle.