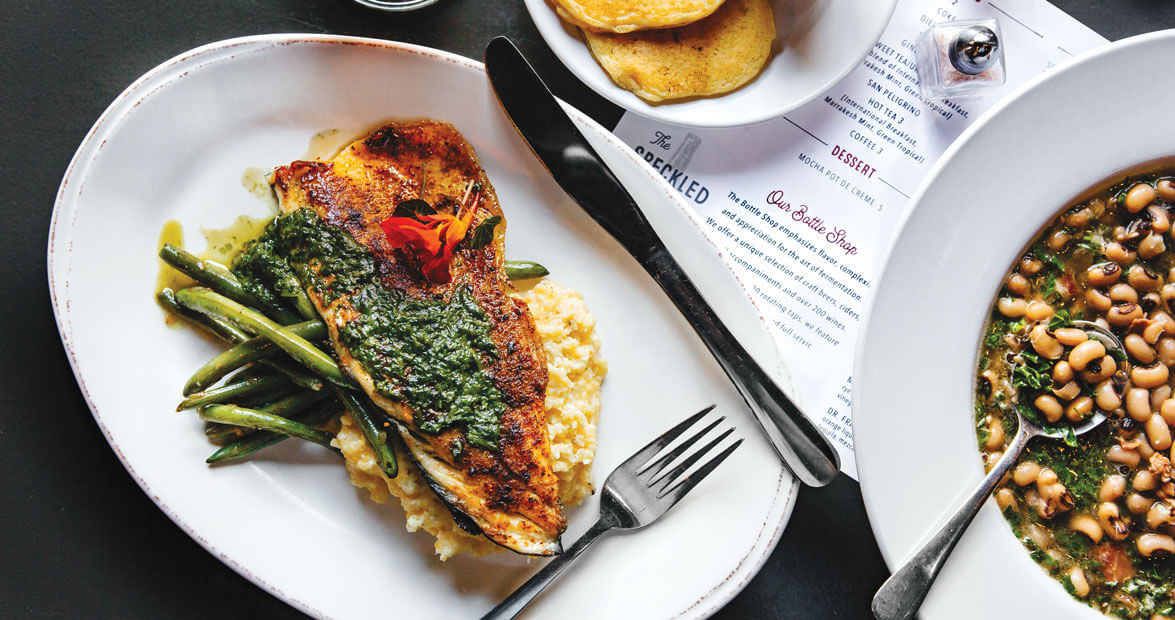 Above: At The Speckled Trout, a combination restaurant/bottle shop, beers and wines are carefully selected to pair with Appalachian-inspired dishes like blackened mountain trout and Gouda grits and soup beans — black-eyed peas and kale in ham hock stock, served with hoecakes and molasses butter.

Growing up in Fairview, Chef Nicolas Peek recalls, there was always something that needed doing at home or on his grandpa’s farm. When he and his siblings saw a pail of green beans sitting on the porch, “we knew a chore was coming.” In the kitchen of his own restaurant, Birchwood Hall, tasks like snapping green beans feel a lot more fun. Every delivery from a local farmer is exciting, an opportunity to combine farm roots and fine-dining techniques. “We’re cooking what’s around us. Taking our past and upgrading it a bit,” he says. “A lot of the menu has family history in it.” Like “Dad’s Tomato Pie”: Peek’s version has diced tomatoes, like his dad’s, plus chowchow, fresh herbs, and Parmesan. “We’re taking his idea and making it fit our style. It’s got his stamp of approval.” 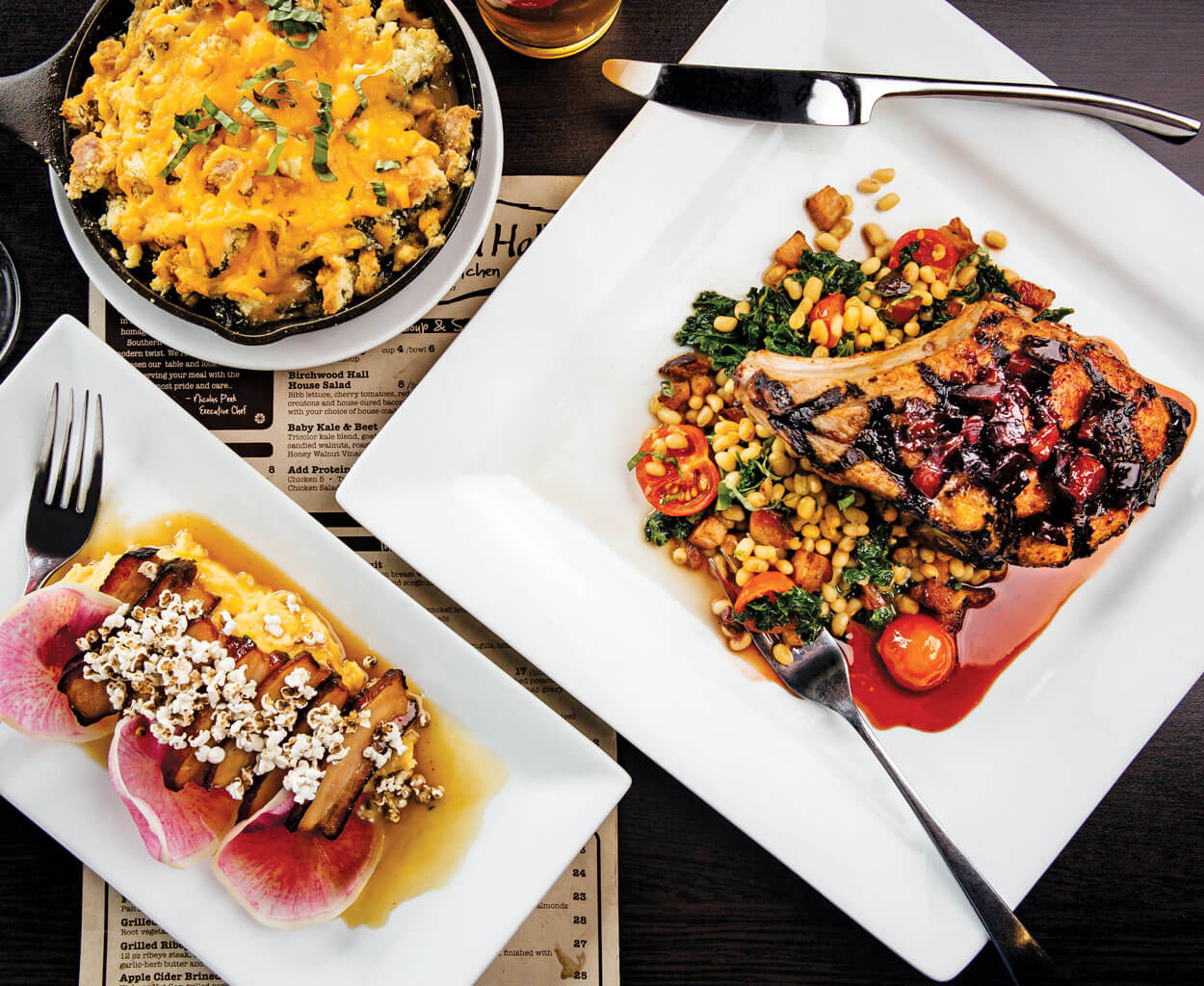 In Madison County, up near the Tennessee state line, the Appalachian Trail runs right through the town of Hot Springs. Hikers walk out of the woods and up the street to Genia Hayes Peterson’s restaurant, to the delight of everyone who works there. “My girls so look forward to it because they love to hear the stories,” Peterson says. “And to see how much they can eat.” Peterson grew up helping her father with his wood ministry — which, in turn, inspired a passion for looking after her community, something she’s been doing at the restaurant for more than 25 years now. “It’s a family place,” she says. “Anything from a daycare center to a nursing home.” She’s introduced some healthy changes to the menu, but the recipes, at their heart, are still old-fashioned home cooking: Many have been handed down through generations, especially from Peterson’s great-grandmother. “She was a wonderful cook,” Peterson says. “She could make something from nothing.” Most famous is her spicy-sweet pepper relish, passed on with a winking warning: “It’ll set your fields afire.” 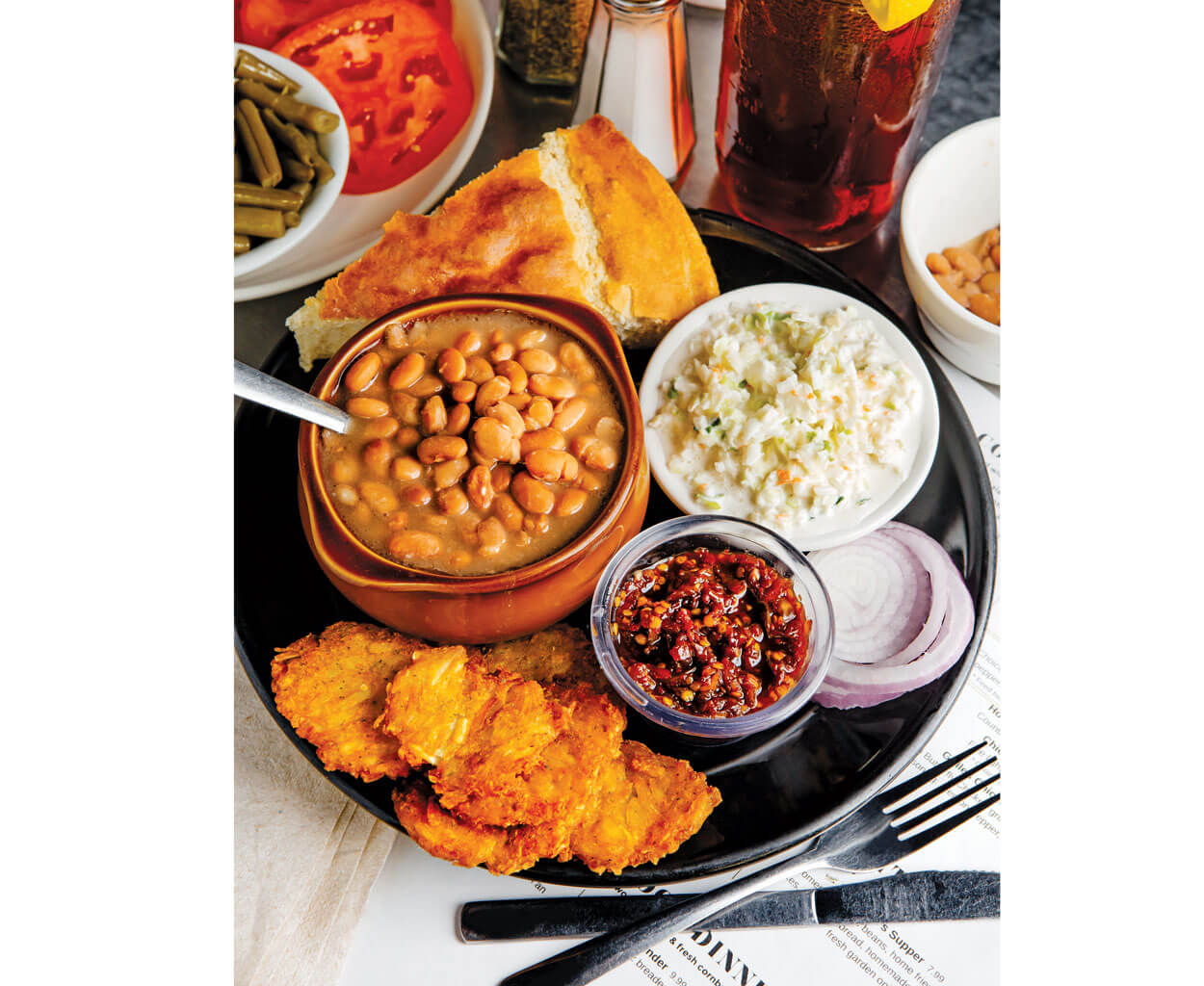 One of the most popular dishes at Smokey Mountain Diner is the “Poorman’s Supper”: pinto beans, cornbread, coleslaw, and potato cakes, crowned with spicy pepper relish. photograph by Tim Robison

For Chef Chris Wishart, cooking in the foothills is the best of both worlds: “We’re part of the mountains and the Triad,” he says. “Our identity is wrapped up in that.” The dishes he’s most proud of are a journey across the state — like Harkers Island oysters (above), prepared with caviar from Lenoir, a quail egg yolk from Pinnacle, and dill flowers grown in Mount Airy. Wishart gets a special opportunity to shine a light on these local ingredients every Friday and Saturday, when he prepares eight-course “Chef’s Table” meals right in front of his guests, discussing farms and food philosophies as he cooks. It’s been thrilling, he says, to bend the rules he learned under the strict French chefs of his early career. “When you don’t have to answer to that anymore, you can apply those techniques to collard greens and beets,” he says. “You don’t have to sacrifice creativity to use what’s in your backyard.” 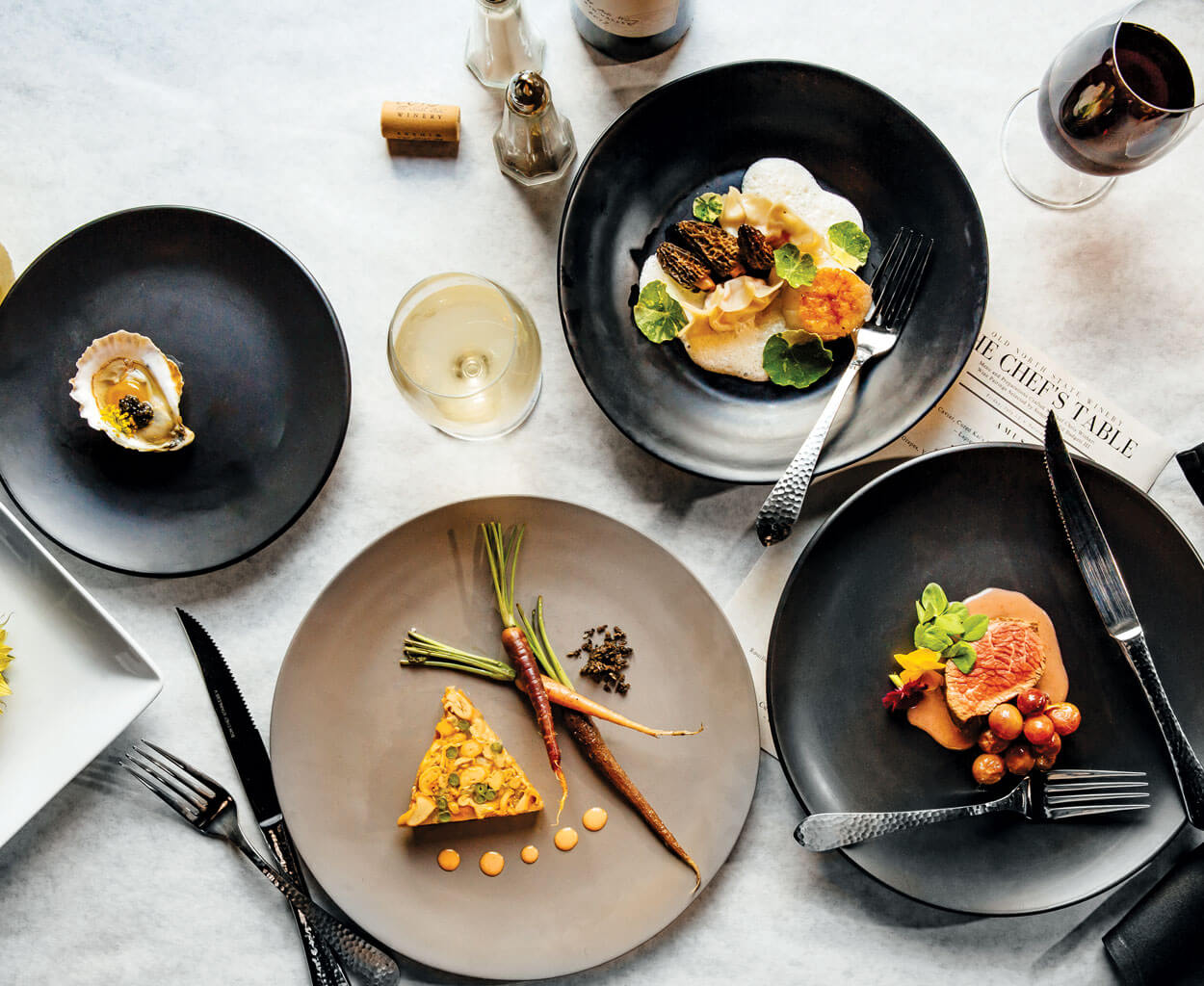 Honeycrisp, Leslie Lancaster says, changed everything. Her husband, Pat, a fourth-generation apple farmer, is an avid student of new varieties, and when he introduced sweet-tart Honeycrisp 20 years ago, the Lancasters’ orchard really began to blossom. Once, this land with the gorgeous mountain views was Pat’s grandad’s homestead. Pat and Leslie started their orchard business in 1994, and have since added a corn maze, a “cow train,” and a pumpkin patch. “We want kids to remember this experience, coming to the farm with their parents,” Leslie says. A day of apple picking begins and ends with a stroll through the bakery inside Grandad’s barn — and the scent memory of those cider doughnuts may linger longest. 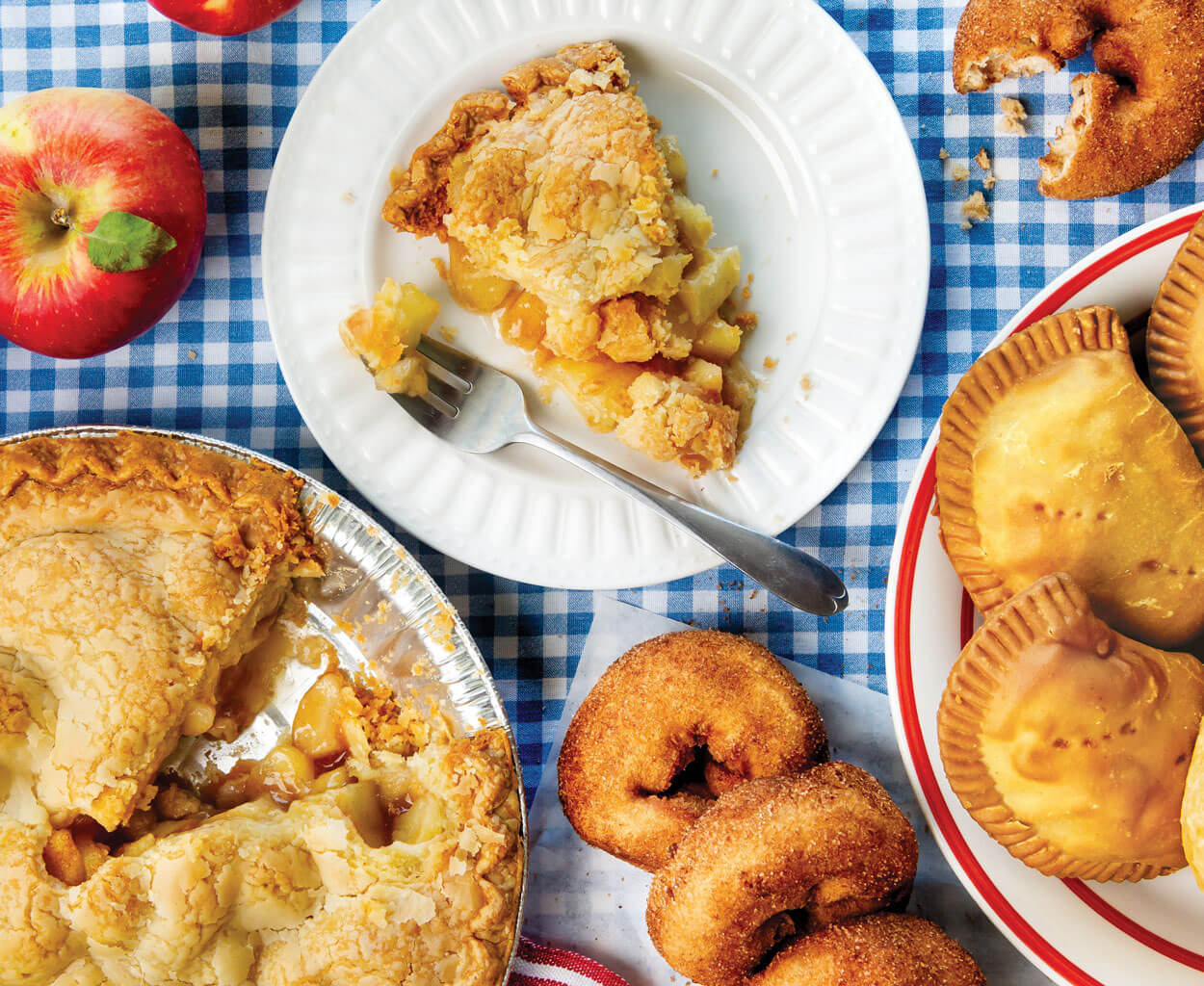 “We do everything apple,” Leslie Lancaster says. That means, among other things, apple pie, apple turnovers, apple dumplings, and apple cider doughnuts. “If it can’t be put into a pie or a sauce, it’s going into cider.” photograph by Tim Robison