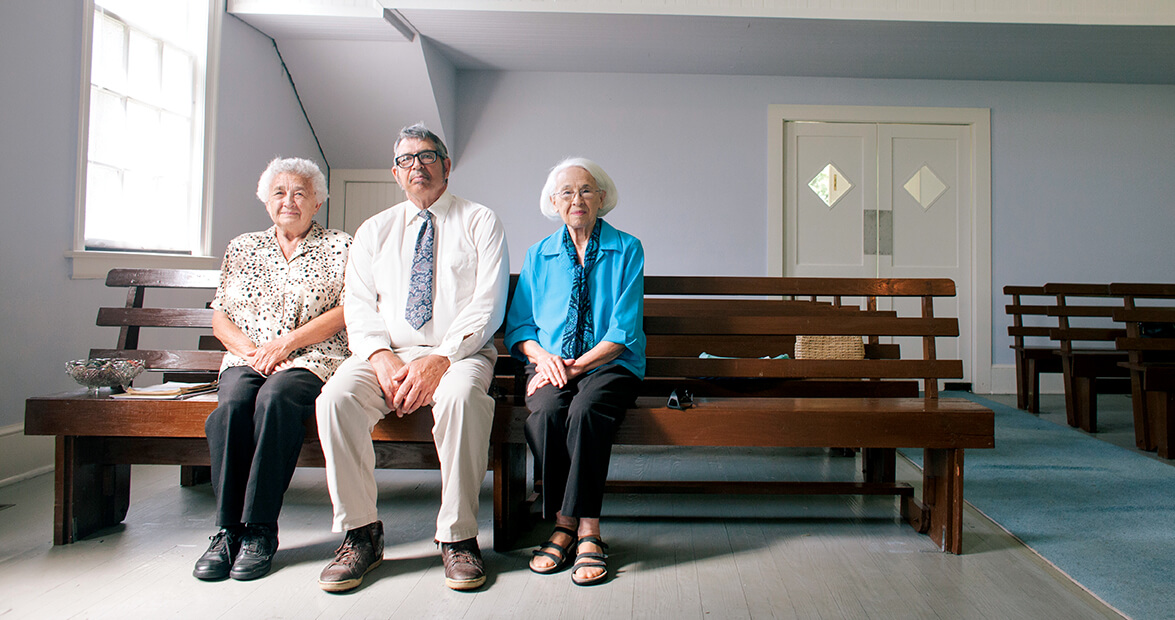 The oldest Russian Orthodox church in North Carolina hasn’t had a priest for 18 years. But at 10 o’clock every Sunday morning, its three faithful congregants gather.

As in all Russian Orthodox churches, at Saints Peter and Paul, no instruments of any sort, not even an organ, are used during the service. The repetitive vocal chanting, which is more of a muted humming of indeterminate words, is in Slavonic. The music — indeed, the entire liturgy — emanates from the small speakers of a portable CD player. Nevertheless, the congregation, all of them family, is solemn, attentive, devout.

Ann Debaylo Mizerak, who is 88, together with her son, David, and her sister, Mary, compose the church’s entire membership. Ann is charming, soft-spoken, white-haired, and well-versed in the history of the church, as well she should be: Her father, Elias Debaylo, was among the many immigrants who came to southeastern North Carolina in 1923. “We were Ukrainians,” she explains, “but everyone here just called us Russians, so that was fine.”

Today, surrounded by flat fields, Saints Peter and Paul Russian Orthodox and Greek Catholic Church, built in 1932, still stands in the village of St. Helena. The three-room brick building is modest, yet lovely, with classic lines. A small parking lot stands to one side. Steps lead to a small portico at the entrance. 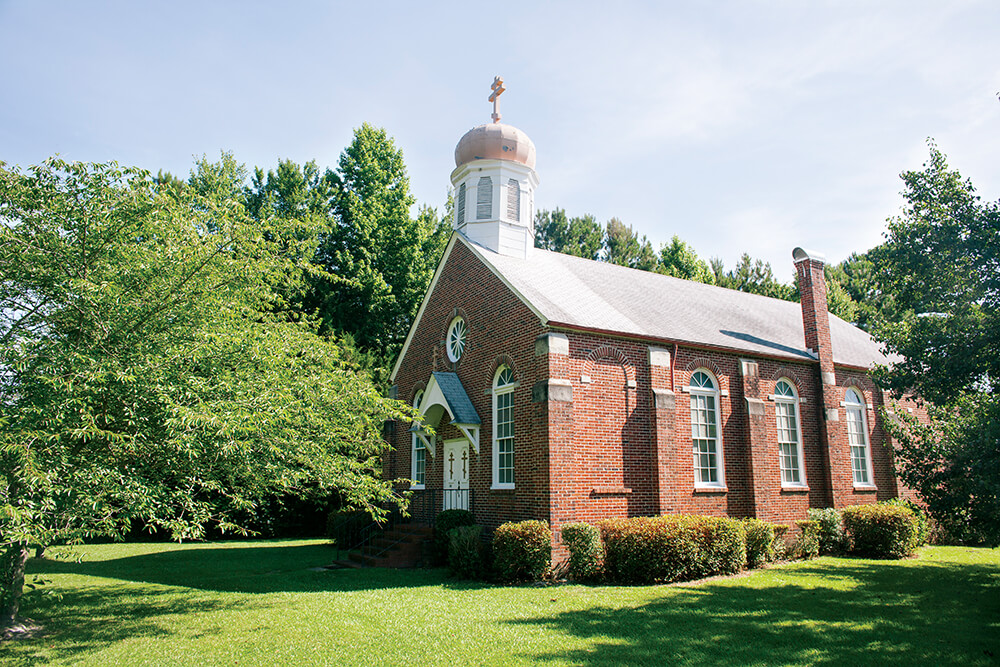 What differentiates Saints Peter and Paul from the many modest chapels that dot North Carolina roadsides? Instead of a steeple, it has the gold dome that’s associated with Byzantine churches, from a majestic edifice in Istanbul — once Constantinople — to the smallest village in Siberia. Atop the dome stands a triple-barred cross: the middle bar where Jesus’ hands were nailed, familiar to all Christians; a higher bar known as the “title” bar, where “Jesus, King of the Jews” was written; and a lower bar, said to be slanted because of the tremendous pressure of Christ’s feet during the excruciating pain of the crucifixion.

Within, blue is the dominant color. A worn blue carpet softens footsteps. The simple linens are white, with bands of blue embroidery. The walls and ceiling are painted a pale blue. And although the exterior of Saints Peter and Paul has a peaked roof, inside, the ceiling is rounded, designed to resemble the tabernacle in the Old Testament. The wooden chest at the front and center of the church, known as a tetrapod, is meant to represent the altar used for burnt offerings in ancient tabernacles. Iconography, a tradition of decoration in Russian Orthodox churches, adorns the wall — with three rounded doors echoing the ceiling’s curve — that separates the congregation from the Most Holy Place, where the altar is located, and which can be entered only by a priest or bishop. The evangelists Matthew, Mark, Luke, and John are portrayed in the gilded icons; on the wall is Mary with the infant Jesus. To the left is St. Vladimir, who brought Christianity to Russia and Ukraine in 988. On the wall to the right are the simple church’s namesakes, Saint Peter and Saint Paul.

In 1905, when Wilmington developer Hugh MacRae bought a tract of land along the railroad near Burgaw in Pender County, he had a vision of agriculture that was different from the norm of tenant farming and sharecroppers. He pictured small, European-style farms, with industrious owners experienced in intensive agriculture. He divided his land into 10-acre farms and built a depot, a country store, and a warehouse for equipment. Now he needed the Europeans. 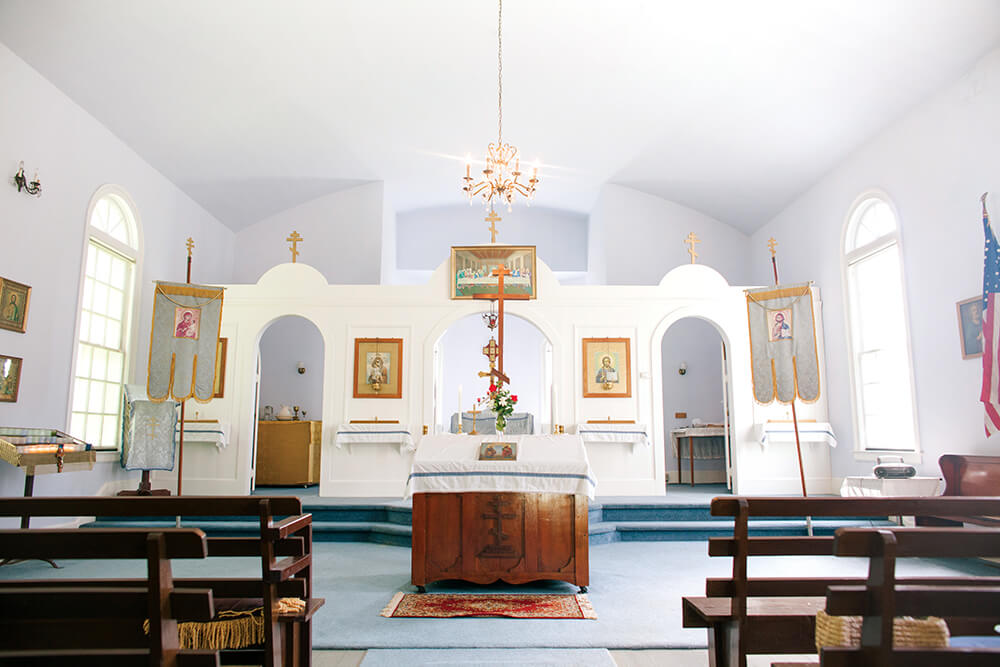 The wooden chest is also known as a tetrapod, where parishioners light candles and present prayers and offerings. photograph by Millie Holloman Photography

MacRae’s agents brought Italians from Europe to the community of St. Helena. But, unsurprisingly, an overseas route proved expensive, so the agents looked closer to home. They took their advertising pamphlets — offering 10 acres and a three-room house for $240, payable over three years — to ethnic groups who had settled in Northern cities. Serbian, Polish, Hungarian, Bulgarian, and Slovakian immigrants made their way to St. Helena. Between 1923 and 1932, so did 28 Ukrainian and Russian families — some from the Northern cities, and, sponsored by American relatives, many from the “old country” itself.

The Russians brought their customs, language, food, and religion: the Orthodox faith. The bishop sent a priest for a few hours on Easter and Christmas, but the people — with surnames including Duplevich, Hafich, Hulak, and Vdovich — wanted a place to worship. In 1932, MacRae agreed to give their organizing committee a deed to land for a church. J.T. Carroll of Wilmington was hired to supervise the building of the structure, and many of the Russians added electrical wiring and brickmaking to their considerable skills, even as they were transforming the land into farms.

When it was constructed, Saints Peter and Paul was the only Russian Orthodox church in North Carolina. Today, framed black-and-white photographs of early religious pageants held there hang in the vestibule. In the Russian Orthodox Church, Christmas is celebrated on January 7, according to the Julian calendar. “We didn’t go to school that day,” Ann says. “But of course we celebrated Christmas on December 25, as well,” she adds. “Friends thought it was so unfair that we had two holidays!”

Here, too, is a touching wooden plaque whose title reads “Honor Roll” and which includes the names of the church members who served in the U.S. military: Gregory Dmytruk. Jerome M. Federonko. Roman Krochmalny.

“Ukrainians have no middle names,” Ann says. “Instead, they take the middle initial of their father’s first name.”

As families grew up, assimilated, and moved away, Saints Peter and Paul began losing its members. Ann knows it’s unlikely that, after all these years, members of the Russian Orthodox faith will turn up in St. Helena. “The only people who have anything to do with this church are its descendants,” she says. Fortunately, the lengthy process to place the church on the National Register of Historic Places is underway. 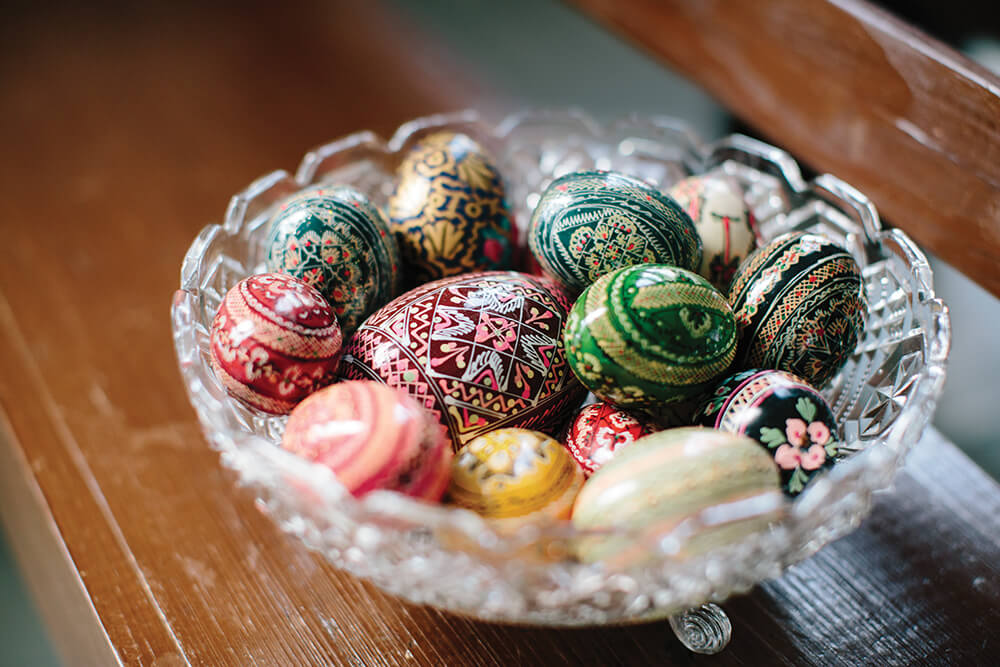 Ukrainian eggs are decorated with traditional folk designs. At Saints Peter and Paul, the eggs are a reminder of home. photograph by Millie Holloman Photography

When visitors attend a Sunday service, Ann has stapled copies of “The Divine Liturgy of the Eastern Orthodox Church” available, in both Slavonic and English. For most Christians, many of the English words are instantly familiar:

I believe in one God, the Father Almighty, maker of Heaven and earth.

But the Slavonic translation bears no resemblance to it:

And although you may recognize some divisions of the service — the Invocation, the Epistle, the Gospel — other rituals are foreign: the Litany of Fervent Supplication, the First Antiphon, the Trisagion, and the “Little Entrance.” Members of the Russian Orthodox faith stand for nearly the entire service, though primitive wooden pews, a scant 10 total, have been installed.

Except for the CD, the service is silent: no sermon, no Holy Communion, since there’s no priest here to serve it. Through the years, priests have led the church, many from the neighboring Camp Lejeune Marine base. At least two are buried in the St. Helena cemetery. But the last full-time priest, Father Nicholas Kowal, retired in 1998. Since then, these faithful descendants have maintained the church and attended the single Sunday service, where the liturgy is sung a cappella in the native tongue.

Still, the church’s identity stands firm, as any Sunday visitor — standing, listening, watching Ann and her relatives turn the liturgy pages so as to follow the service — can attest. The gilded icons, the dome, the chants in a foreign language, and the presence of triple-barred crosses create a nearly haunting — yet wholly comforting — reflection of the immigrant’s experience, and how faith endures, and inspires. Never mind that there are so few worshipers. Perhaps St. Matthew wrote it best: “For where two or three are gathered together in my name, there am I in the midst of them.”