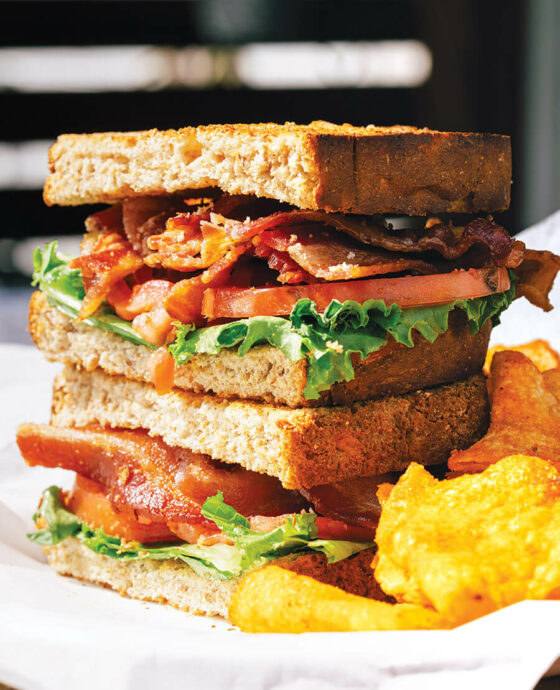 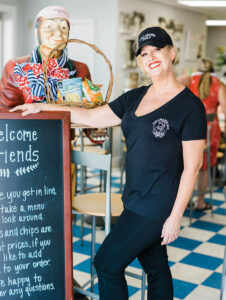 Standing next to longtime “waiter” Cecil — a kitschy statue she found in an antiques shop — Melinda greets guests. photograph by Matt Ray Photography

On most days, you’ll find Melinda Stein Sandford behind the big glass cases of meats and cheeses at Calabash Deli, greeting customers by name or whipping up a batch of meatballs for the dinner special. Her blonde ponytail tucked behind a baseball cap, Sandford looks like a natural inside this New York-style restaurant that sits alongside some of North Carolina’s most famous seafood joints. And there’s good reason: She comes from a long line of deli owners.

Sandford planned to follow a different path. As a young woman, she set aside her family’s service-industry history to try architecture and then fashion merchandising before earning a degree in textile production management from the Fashion Institute of Technology in Manhattan. Along the way, she fell in love and eventually relocated with her boyfriend to the North Carolina coast. The relationship didn’t pan out, but Sandford liked the area. So at 25 years old, she found herself in the tiny community of Calabash, far from home and with limited options for a career in fashion. She turned to the tradition that had been passed down to her through four generations of Steins, who’d been feeding folks on New York’s Long Island for more than a century.

Sandford knew what it took to run a deli — she’d worked plenty of weekend shifts at her dad’s places — but could she do it in Calabash? That might prove to be a challenge. “Sometimes,” she says, “it’s amazing to me that I landed in the seafood capital of the world — and opened a deli.”

To understand the irony of Sandford’s predicament, it might help to know just how deep her family’s hospitality roots run: The seeds were planted in the late 1800s, when German immigrant George Stein and his wife, Kathryn, opened both a bar and a confectionery store in Jamaica, Queens. In the 1920s, the family likes to say, the Steins began the New York tradition of hot dog carts when George’s son started delivering wieners by horse and buggy on Long Island. The Steins’ grandson Arthur Stein Sr. opened his first deli in Glen Cove in 1950. The next generation, including Sandford’s dad, continued the family food-service business, having run similar establishments in New York ever since. 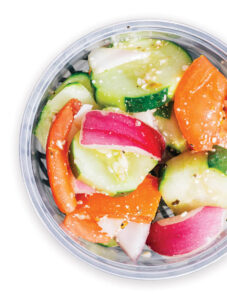 So when Sandford found herself at a crossroads in Calabash, it was obvious that she should turn to selling cold cuts and salads. There was already a small, one-man deli in town, and Sandford took it over in 1997. Within a month or so, she hired a coworker, and over the years, her business has grown along with the town, adding seating, more employees, an outdoor dining area, more menu items, breakfast service, and lots of loyal fans.

“I call it a deli,” Sandford says, “but my dad disagreed.” He told her that she should call it a delicatessen, a word that comes from the German term for delicacy. “New York delis don’t have seating; they’re grab-and-go,” she says. Sandford considers her business more of a hybrid between a diner — or maybe a lunch counter — and a counter-service deli. 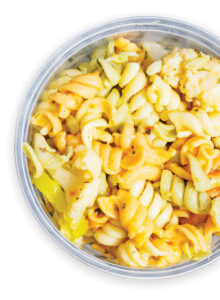 Despite his disagreements with his daughter over semantics, Arthur Stein Jr. was a good source of information and encouragement before he died two years ago. “We would talk about everything from ordering to pricing,” Sandford says.

One of her dad’s biggest lessons was showing her the importance of hard work and customer service. “He always said to treat people well and to treat your staff well,” Sandford says. So she tries to remember names and orders, and she takes special pleasure in greeting customers who haven’t come in for a while.

Her mom, Sandra May, is also a key ingredient in the deli’s success. Sandford’s parents divorced when she was young, and her mother worked as a nurse while Melinda was growing up. Nowadays, May and her current husband also live in the Calabash area. “She’s amazing,” Sandford says. “She helps me be a better person. Sometimes, I don’t feel like she gets enough credit.” 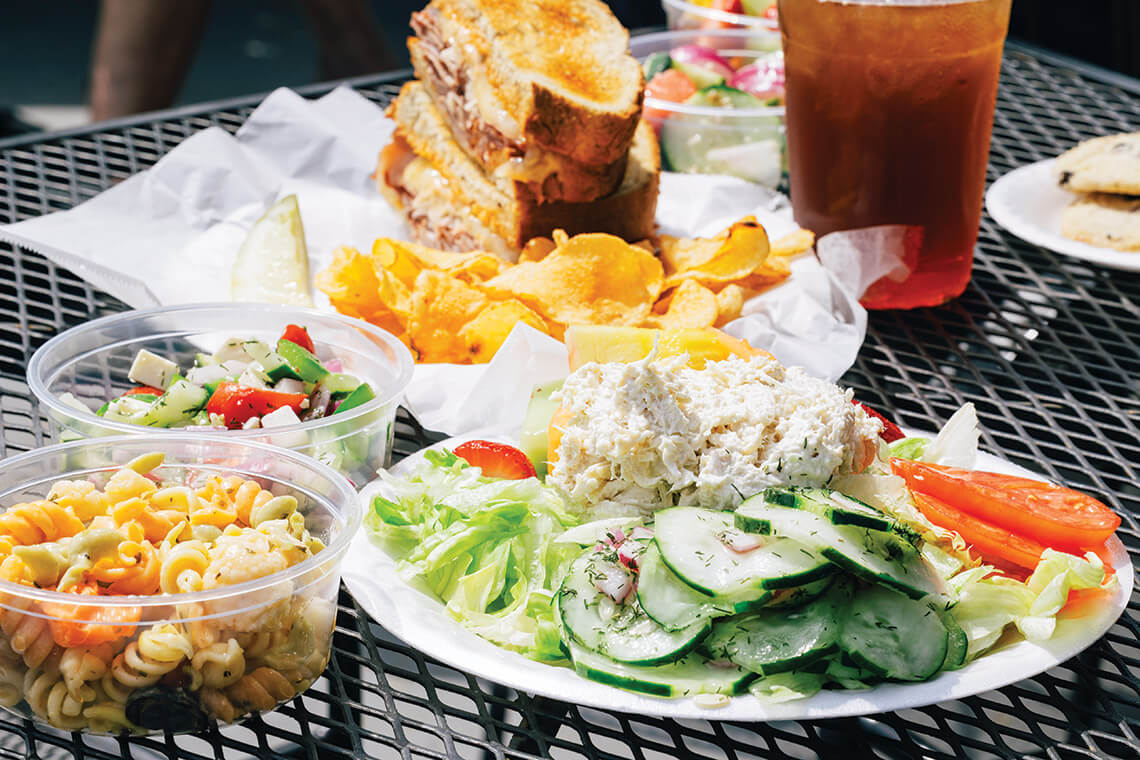 Inside the bountiful, brightly lit deli case at Calabash, the Stein family’s history can be found in time-tested recipes that are still used in staples like chicken salad, tuna salad, and German potato salad. Even some of May’s house-made pastries sit amid the deli fare. And, yes, the recipes are secrets. “I have one customer who’s been trying to re-create the chicken salad,” Sandford says. “She said she can’t get it quite right.” Why? “Because there’s one special ingredient that I can’t share.”

Sandford has added some Southern-style dishes, too, like pimento cheese and potato salad with eggs, celery, and onions. And there are plenty of specials, including her favorite, the Mel’s Special, with turkey, Swiss cheese, coleslaw, and Russian dressing on rye. Add in new salads, sandwiches, entrées, and hearty Italian fare like chicken Marsala and baked ziti, and the menu can be … well, a little overwhelming. “We do have people come in and say it’s just too much,” she says with a laugh.

Over the years, Sandford has turned this corner lot just half a mile from the Calabash River into a community gathering spot. People stand at the counter to place orders for family fetes, while friends at tables gab over coffee and breakfast sandwiches. Throughout the day, it’s a bustling center of comfort and food. And overlooking the whole scene is a wall full of historic Stein family photos. 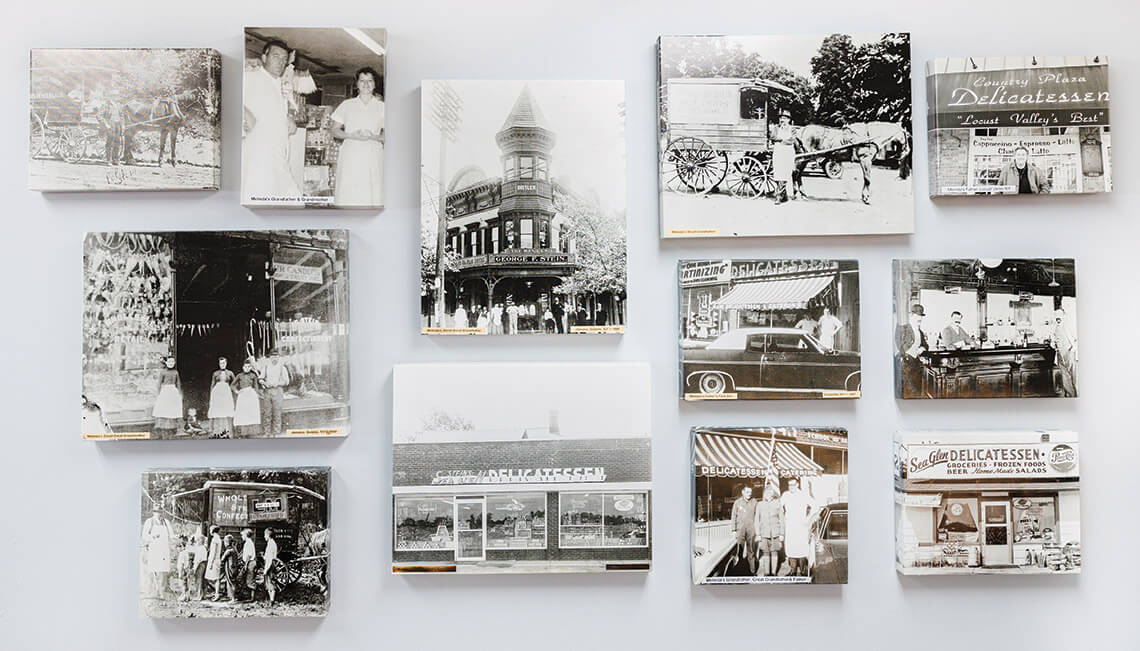 This year, Sandford celebrates 25 years in business at Calabash Deli. Meanwhile, she and her sisters keep their father’s legacy going by working with his right-hand man, who continues to operate the family’s deli nearly 700 miles to the north on Long Island. As of 2022, the Steins’ Country Plaza Delicatessen has been a tradition in Locust Valley, New York, for nearly half a century.

As for Sandford’s slice of the Big Apple in Calabash, she believes that it adds complexity and a necessary counterpoint to all those seafood joints that made the area famous. “Looking back,” she says, “I can’t imagine doing anything else.”