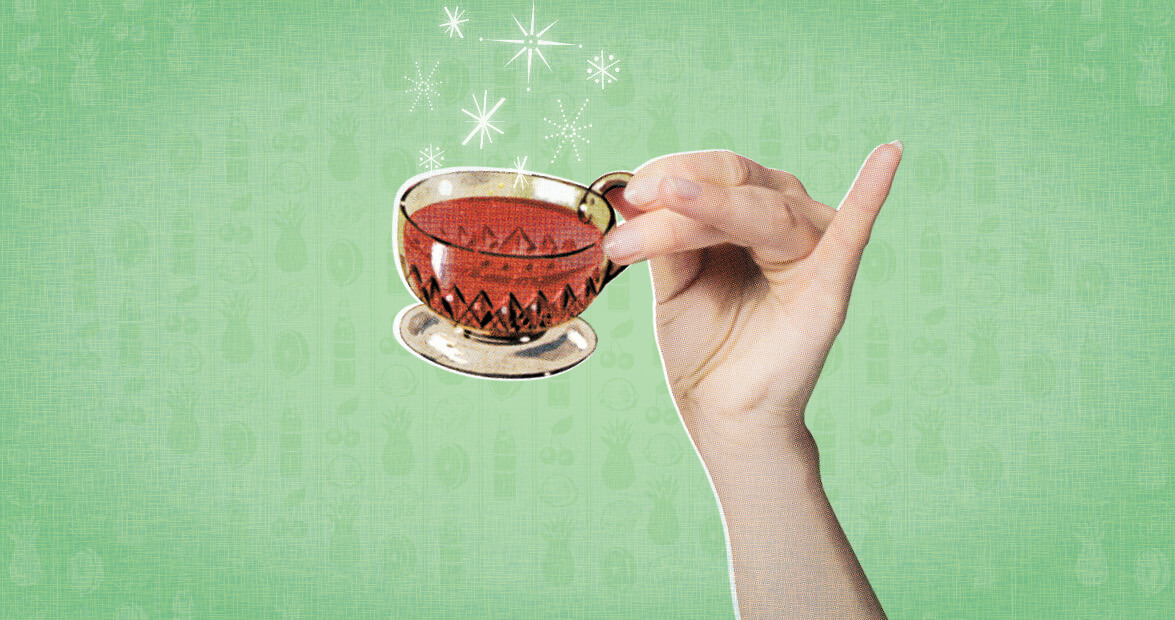 Every late December, my mother borrowed my grandmother’s cut-glass punch bowl and tiny matching cups for the family Christmas Eve gathering at our home in Lumberton. The rest of the year — with exception to the occasional bridal or baby shower — the bowl remained stationed on top of my grandmother’s china cabinet with all the other objects we weren’t supposed to touch. Like much holiday fare — special ornaments, the string of lights a child might tangle or short — the bowl and dainty cups being forbidden made them all the more desirable. My sister, cousins, and I liked the way the little cups had the power to cast rainbows around the room when we lifted our pinkies and gasped and guffawed in imitation of the adults. The concoctions inside the bowl, extravagant and completely impractical for quenching thirst, seemed designed for show as much as refreshment. Which was the point: Punch wasn’t punch if it wasn’t memorable. No wonder it felt more like an essential ritual than just a drink.

Fetch the bowl. Fill the bowl. Watch the results.

My mother set up her mother’s bowl, the cups circling it, on our dining room table and issued the often-repeated don’t touch. These words were spoken about presents already wrapped and under the tree, as well as all the ingredients she’d assembled for the punch. The creations — and they varied over the years — were colorful, achingly sweet, and thrown together with ease. There is no culinary equivalent to those recipes: floes of lime sherbet or vanilla ice cream drifting in fizzy ginger ale; cubes of frozen orange juice or lemonade; glugs of Sprite or Coke or Pepsi; a deep lagoon of unnaturally red liquid, created with Kool-Aid or Jell-O powder or drops of food coloring. Sugar on top of sugar. Other than sugar, the ingredient that seemed to find its way into the mix every single year was pineapple juice; sometimes a frozen life preserver of pineapple juice floated on the surface, bumping the sliced fruit and Maraschino cherries bought by the pound, a delicacy that had to be hidden until time. Nothing went with a tiny cup and an extended pinkie like a Maraschino cherry. 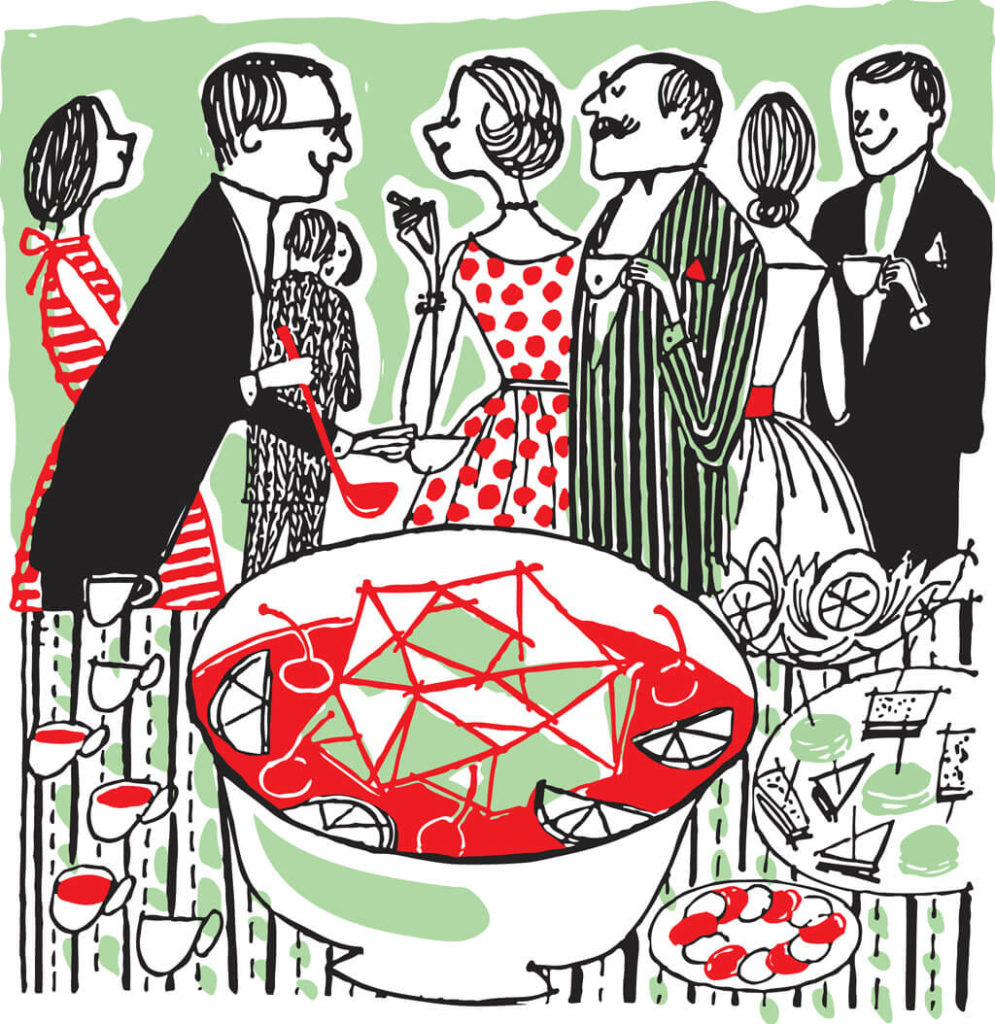 Laughter is always louder near the punch bowl. photograph by CSAIMAGES

For a long time, I thought punch was synonymous with dessert — and for good reason. Our standard punch at Christmas Eve gatherings involved two half-gallons of lime sherbet, ginger ale and pineapple juice, a cup or two of sugar to make sure it was sweet enough, and, of course, cherries. (There was also a “Coke Float” version of this, but for baby showers, where grown women did things like suck Coca-Cola from baby bottles and have timed races diapering dolls.)

But as the years passed and people began to consider that maybe it wasn’t a good idea for your beverage to have more calories than your food, my mother switched to a more refined punch, a simple mix of pineapple juice, frozen concentrated orange juice, and ginger ale, with a tasteful ice ring and just the right number of Maraschino cherries floating on top. That shift to moderation marked, in my mind, the progression away from the punch bowl as the center of attention to a healthier, or at least less communal, option: a flute of sparkling grape juice, a glass of wine, or a beer can slipped into a fancy little green-and-red skirt. The tightening grip of calorie counting may have been to blame, or maybe it was a cultural shift, like kids wearing blue jeans to church. Who’s to say.

Certainly there were other options besides big scoops of lime sherbet to wash down your cheese biscuits and sausage balls and onion dip. (My grandmother soaked her famous Japanese fruitcakes in Manischewitz, and one of the men might have taken a swig on the sly, but that was as intemperate as things got in her presence.) As I got older, I became aware that there were often two punch bowls at holiday events and weddings and big parties. If you were in the basement of the Baptist Church, you could be certain that the punch in your glass was virtuous. But in secular environments, there was likely a separate bowl with a different offering. This bowl was manned by an adult who had been selected for the job, a grown-up who, with one hard look, could keep curious kids at bay.

This was the most interesting punch bowl, the one that revealed and amplified. Laughter was louder here; conversation dipped and rolled and carried on. Stories unfurled. Which could be true, of course, at the other punch bowl, too, because punch, alcoholic or not, has an effect unlike any other drink. Punch, even bad punch, does something to people. A punch bowl — refilled and refreshed often — makes people want to keep circling back, indulging in ways they might not if each trip required them to scoop their own ice cream and add sugar and cherries on top, or pour yet another big splash of wine or grape juice or ginger ale. No matter how many ladlefuls you might have, or how many calories are packed into each sip, those dainty glass cups keep you feeling light and festive. Even if there isn’t an added kick in the mix, the red food coloring alone is usually enough to deliver a boost of holiday spirit.

Personally, I’ve always liked one punch bowl, because I like a little mystery. One silver, bubbly bowl with a garland of holly is impossible to resist, no matter what it contains. And it’s nearly impossible to know for sure just by looking. Careful observation of the crowd gathered is required. Those who almost never partake might shyly fill a glass, and then, over time, begin talking a little louder, voices giddy and frivolous. These are the voices we mimicked as children. And, if you watch closely, you may catch a regular imbiber with a puzzled expression sip, smell, swirl, study, and wonder if there’s a second punch bowl tucked away somewhere.

Punch makes a statement and creates its own atmosphere. It beckons people to stand a bit closer so that they can lean in for a refill. More than that, punch, like many other aspects of the holiday season, is an acknowledgment of the celebration at hand. The bowl, set out just so, says, We only do this once a year.

Once a year, we bring out the now-antique punch bowl and wash the tiny cups — they don’t hold much, but who’s counting how many times you ladle up? There’s plenty more in the fridge, ready when you are. The fruit garnishes are cut and eager to set sail. It all seems so easy. I love my punch bowl, and though it has spent a few years in the back of our rarely opened china cabinet, its tiny cups replaced by the more trendy stemless wine glasses, I’m thinking of dusting it off and putting it to use this year. I’m thinking grenadine and fresh lime garnishes for holiday color, a little pineapple juice and seltzer, a cherry on top. Rum? Maybe — it’s the holidays.