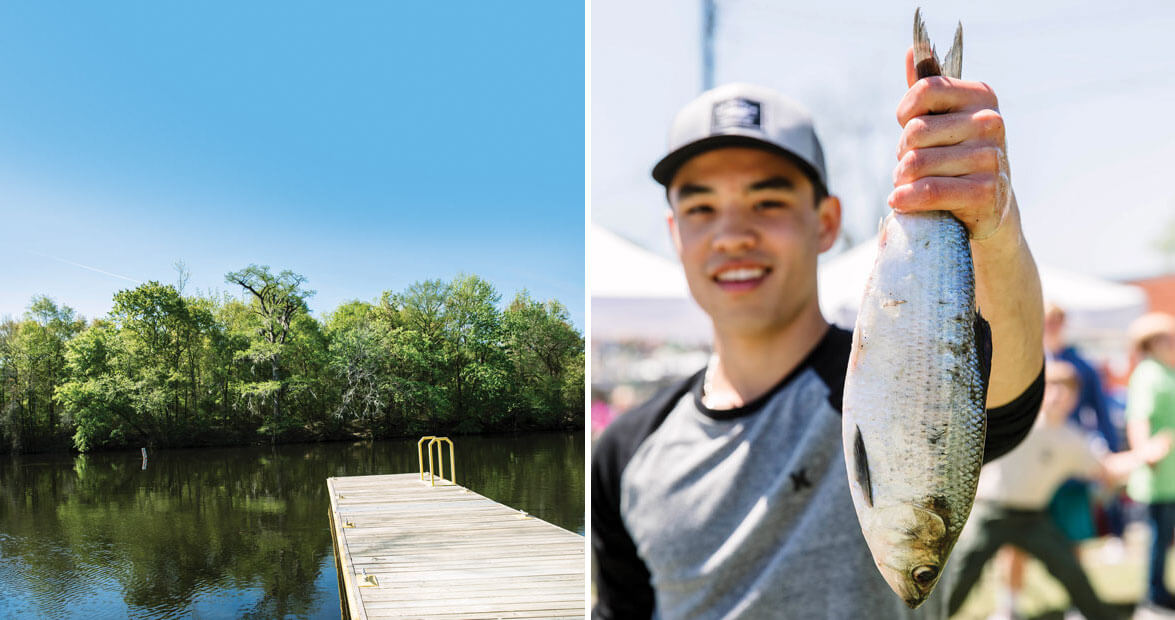 By the time Hurricane Matthew hit, the shad were long gone, back out to sea. But the water they return to every year in late winter, near Grifton, was no longer calm and meandering. Contentnea Creek was far out of its banks, only four feet below the high-water mark set by Hurricane Floyd. The water on downtown Queen Street was six inches deep. The grocery store was flooded. Fourteen inches of water stood in the Hwy 55 burger joint. Neither would reopen for months. At least.

Matthew in 2016 was like Floyd in 1999, which was like Fran in 1996. After the earlier hurricanes, hundreds of people in tiny Grifton had no homes to return to, and population numbers show that nearly one out of seven people in town left for good. Ten years after Floyd, a massive flood hit, which led to the redrawing of the town’s 100-year flood maps. Another 18 people left when they realized that their homes sat on land that could no longer be built upon. The low-lying areas became campgrounds, walking trails, and parks — one of which bears the words “Rebirth from the Flood of 1999” on its entrance sign. The shock from the change in landscape gradually wore off, and by then, the town had been remade by the local economy as well. In the early 2000s, DuPont effectively closed a textile plant on NC Highway 11 that had provided thousands of steady jobs since the 1950s. And so Grifton, with its modest homes, leafy streets, and steepled churches, always a sleepy little town on the road between Kinston and Greenville, got a little sleepier.

“I think Grifton has been kicked as hard as a town can be kicked,” says Rick Gaddy, who grew up here. “But we don’t give up.”

The dignitaries — area mayors, insurance commissioners, clerks, and superintendents — sit on folding chairs on the back of a flatbed truck. Before the Grifton Shad Festival parade officially starts, a few people come up to the podium to speak. “If you’ve never been here before, welcome, visitor,” says Mayor Billy Ray Jackson, who, with his fedora, short tie, and sunglasses, looks straight out of a 1960s government handbook. “If you’ve been here more than three times, you’re home.”

A woman on the other side of Queen Street can’t help but mention that the man at the podium is her son. Addie Jackson Harper, now 80, has since moved to Burlington, some two hours away. “I see people I started first grade with,” she says, looking around. Her daughter, Lorie Jackson Barbour, is here from Leesburg, Virginia. Lorie’s sons are here, too. One is a wrestler, and the other happens to have a part in his high school production of The Little Mermaid. Both are missing practices. “We had to,” Lorie says. They do not miss a festival. 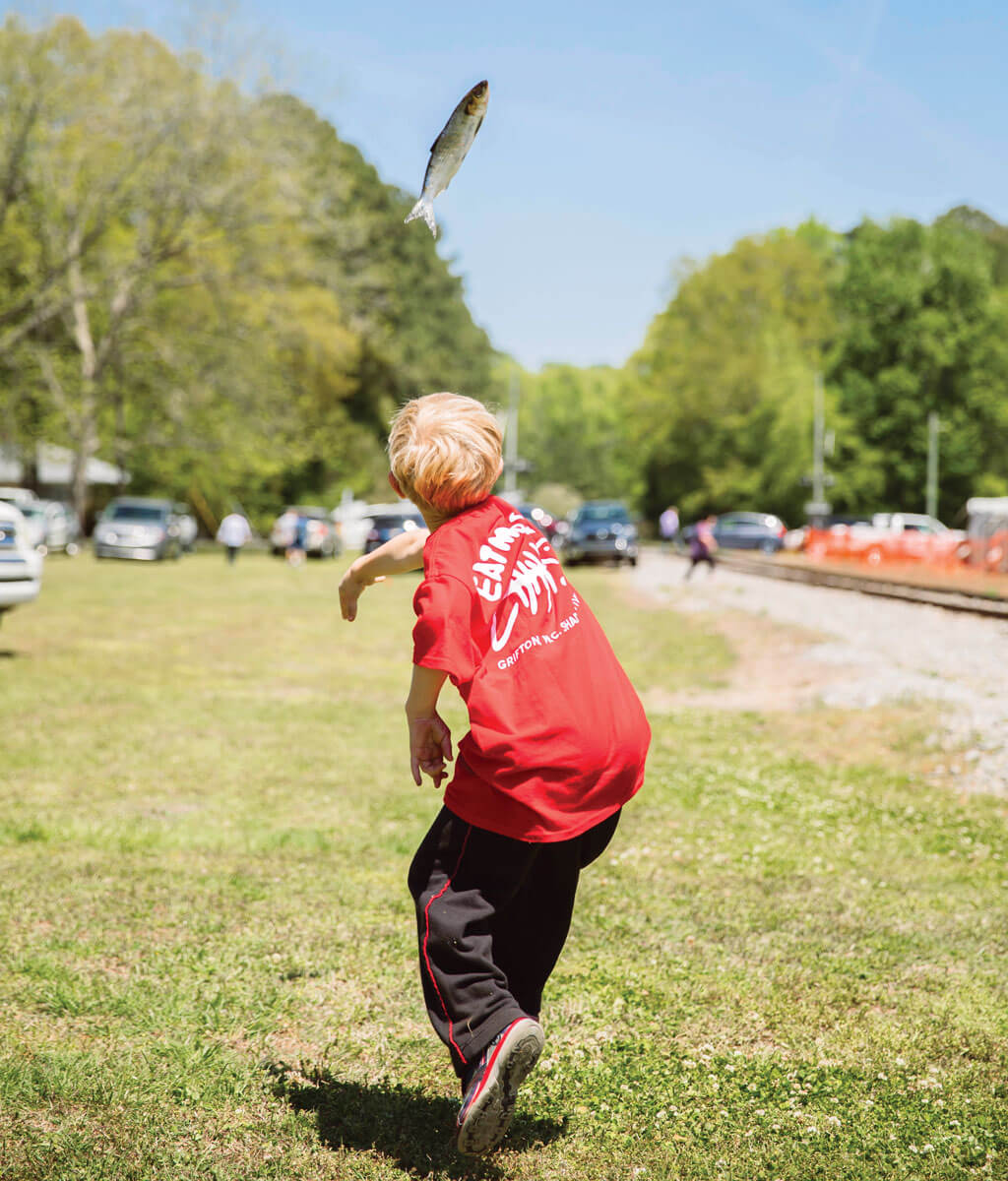 Addie grew up here. Got married, widowed, and remarried here. That wedding was in 1999, months after Hurricane Floyd brought six to eight inches of rain and 100-mile-per-hour winds. “The flies were really bad,” Lorie remembers. Billy Ray’s yard flooded to his back porch. But the town stayed. “Every time, they say, ‘We won’t be pushed out.’ It’s a town of survival,” she says. And no matter how bad it gets, the Shad Festival goes on.

Then, in a quiet moment, before the Second Marine Division Band and its brassy anthem arrive on the parade route, Lorie leans in. “I don’t like shad,” she whispers. 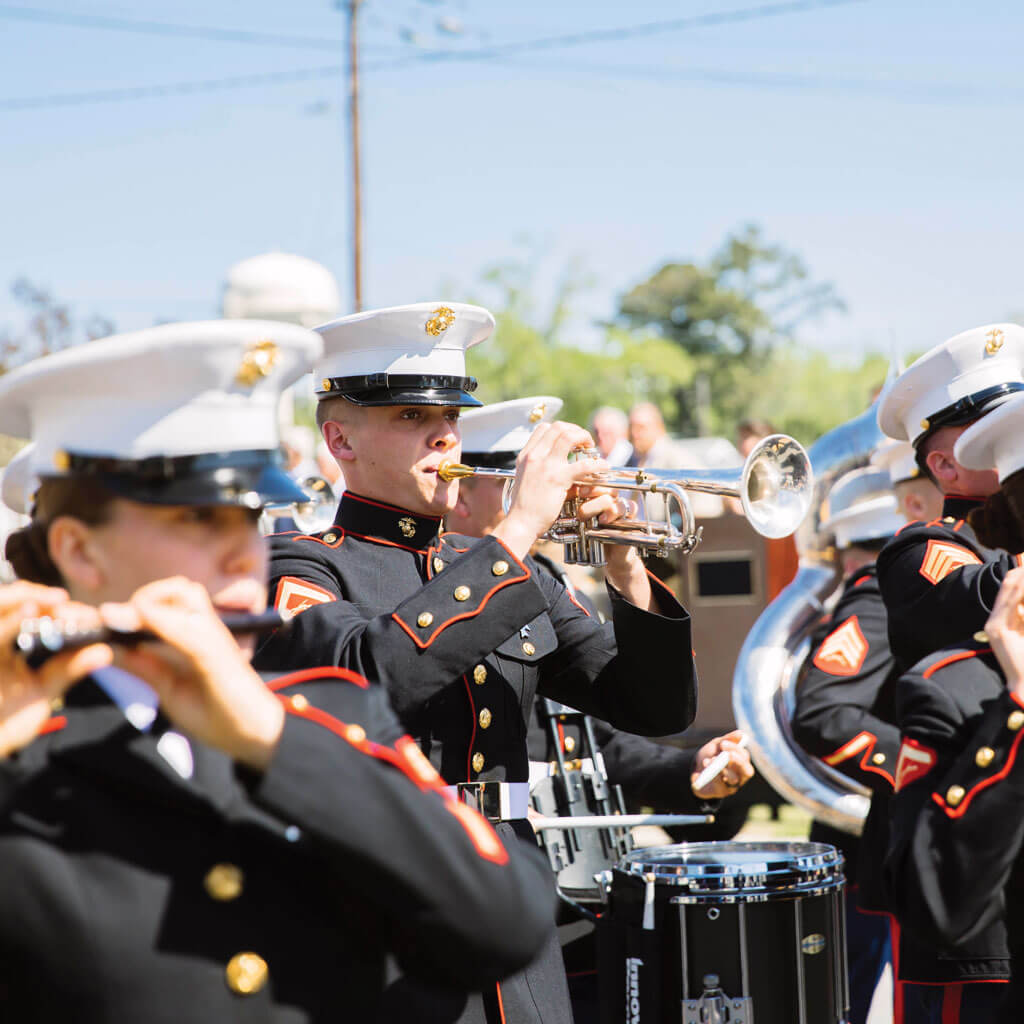 The Second Marine Division Band kicks off the parade at the festival. photograph by Geoff Wood

The only shad at the festival this year are for throwing.

One legend says that a porcupine ran into the water, got turned inside out, and became a shad. It is not an easy fish to eat. It’s astonishingly bony. The preferred way to cook shad is to fry it, adding vinegar to the oil just before adding the fish to crystallize many of the bones. But there are just too many bones.

In any event, it’s hard to find a shad to eat here. The high school football team has joined up with the local Lions Club to cook batches of fish stew in large iron pots. The recipe, some 47 years old now, calls for bacon, potatoes, tomato sauce, onions, and a dozen eggs. “You let it sit,” insists Tomha McMillan, a beefy assistant coach. “You don’t stir it.” The peppery smell wafting out from the town park pavilion leads to the longest food line at the festival. But the stew contains catfish, not shad. 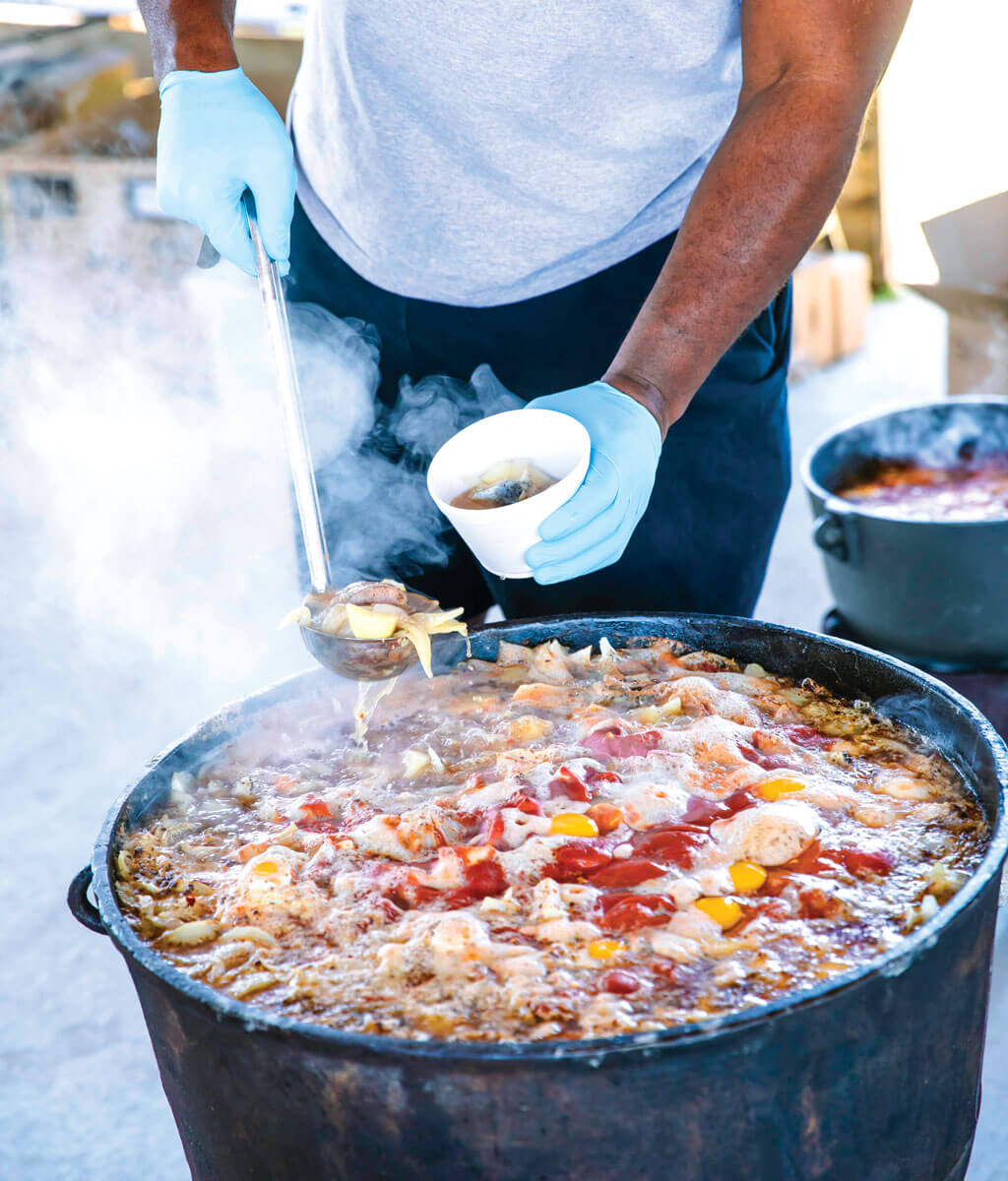 Tomha McMillan carefully dishes up a bowl of fish stew at the festival. It sells well, and raises money for the Ayden-Grifton football team, but, in his words, “it’s super hot.” photograph by Geoff Wood

The only shad at the festival this year are for throwing. People — mostly men — line up, pay a dollar, pick up a frozen shad, are told not to step past a pair of yellow cones, and then heave a shad as far as they can into a patch of grass next to the railroad tracks. At this point, 122 feet is the best throw. “His secret was he folded the fish in half,” says a man holding a clipboard.

Shad show up on official “Eat Mo Shad” T-shirts, which one in 10 people here seem to be wearing. A shad logo appears on banners hung on poles. On a sign atop the police department. Painted on a shed. Cut into a metal fence. Yellow paper shad are taped to storefront windows. But the real, live shad are mostly gone from Contentnea Creek by the time the festival begins around the third weekend in April. They’re everywhere and nowhere at the same time.

The fish spend most of their lives in the Atlantic Ocean, but early in the year, every year, they find their way into rivers along the Eastern Seaboard, going farther and farther up creeks and streams to the places where they hatched. Grifton, a prime shad spawning — and, hence, fishing — spot, is some 50 miles upstream from where the Neuse River widens out into Pamlico Sound past New Bern. After they spawn, the shad head back out into the ocean. Tommy Sugg, one of the folks in charge of the festival this year, says there might be a few left in the creek at this point. “Usually,” he says, “when the dogwoods bloom, they’re gone.” Then again, the Shad Festival really isn’t about the shad anyway.

Tommy, who looks like a skinny Kenny Rogers, flits around the festival “like a paper in the wind,” according to one of his associates. He stops long enough to recount one story about the festival, which, at nearly 50 years old, is one of the oldest festivals in North Carolina. In the late ’70s, Tommy went to a Waylon Jennings concert where the Hells Angels motorcycle club was providing security. They got to talking, and Tommy mentioned the Shad Festival offhand. He didn’t think anything of it. At the next festival, Tommy heard the faraway rumble of Harleys. “Thirty of them came riding in formation,” he says, a sly look on his face. “They showed up. Well behaved.”

The Shad Festival really isn’t about the shad anyway.

Still, the festival began to wither. One year, just 4,000 people came. It wasn’t until 2014 or so when it really started to come back to life, Tommy says. Why? The organizers put in a lot of hard work. They meet at least once a month all year to get ready. Now, about 25,000 people come to town for the festival, making Grifton’s population swell, at least for one long weekend, to 10 times its normal size. A lot of the young folks, when they leave town for college, for work, or to start a family, will only come back to Grifton twice a year: on Christmas and in April, for the Shad Festival.

For the folks who live here, Yvette Thorbs says, “this is the biggest thing in Grifton, ever.” Wearing a balloon monkey in a balloon palm tree on her head, Yvette stands amid carnival rides and seven of her grandchildren. They’ve just spent a lot of money on tickets. Whenever the children do something good at school, they get a little pocket change. Over the year, they’ve saved their money and pooled it to come up with about $150. Most of that goes toward riding the rides.

Then Yvette talks about the storm. “Matthew tried to get us,” she says. On the Lenoir County side of the creek, where she and her family live, 13 relatives on the same road lost everything with Floyd. But they stayed in Grifton. 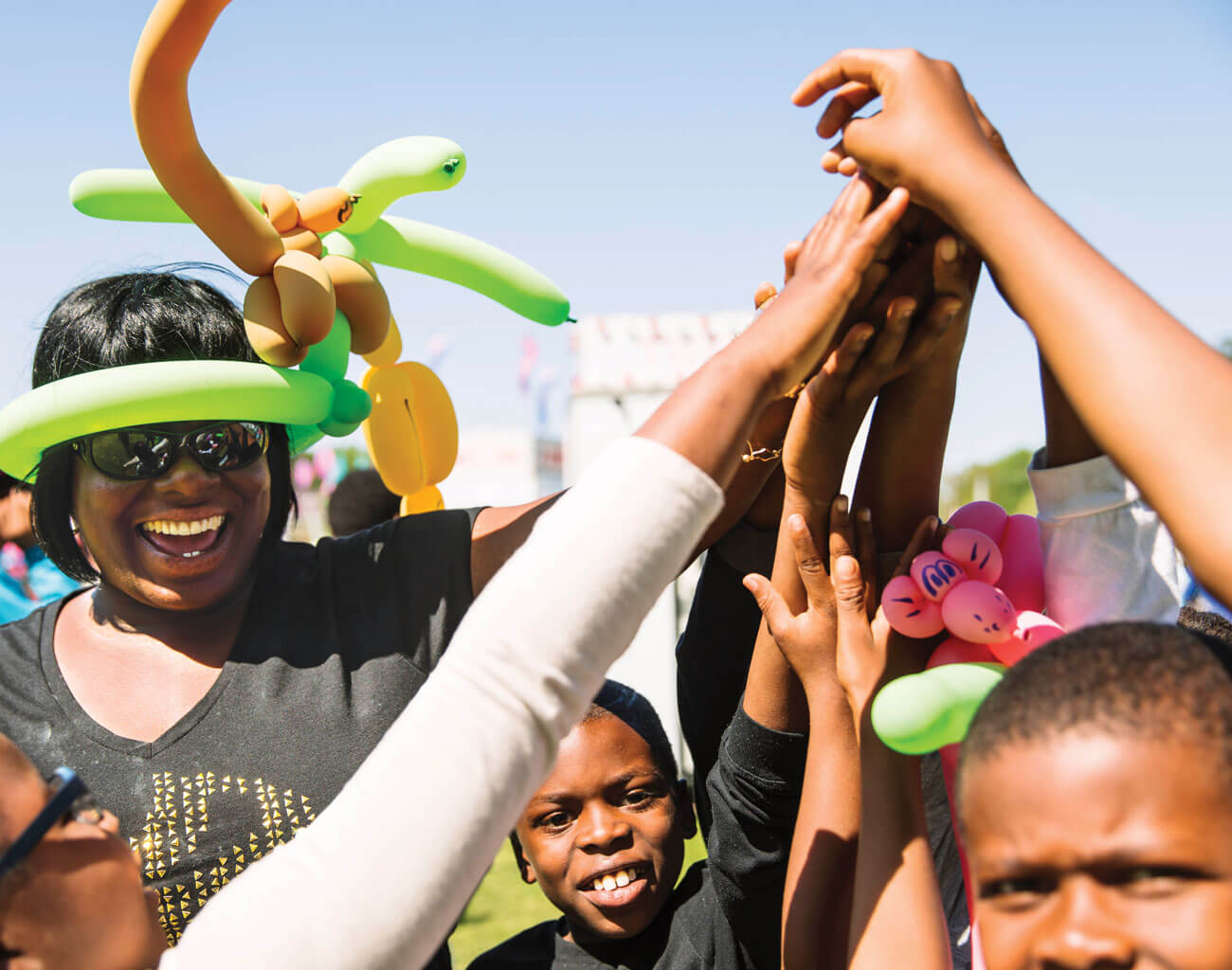 Yvette Thorbs and her grandkids are here to ride the rides. photograph by Geoff Wood

Floyd and Fran hit Grifton’s black community the hardest; by one town commissioner’s estimation, about 80 percent of the African-Americans here were displaced. But for some of those families, an unforeseen silver lining emerged. When older white people started moving out of their homes, black families, who had been looking for a place to live, moved in. The town, white and black, once had neighborhoods divided along racial lines. Today, Yvette says, the only visible split seems to happen during the Saturday night street dance. The white folks head up to the depot for the rock and beach music, while the black folks walk down to Mattie’s Mini Park for gospel. 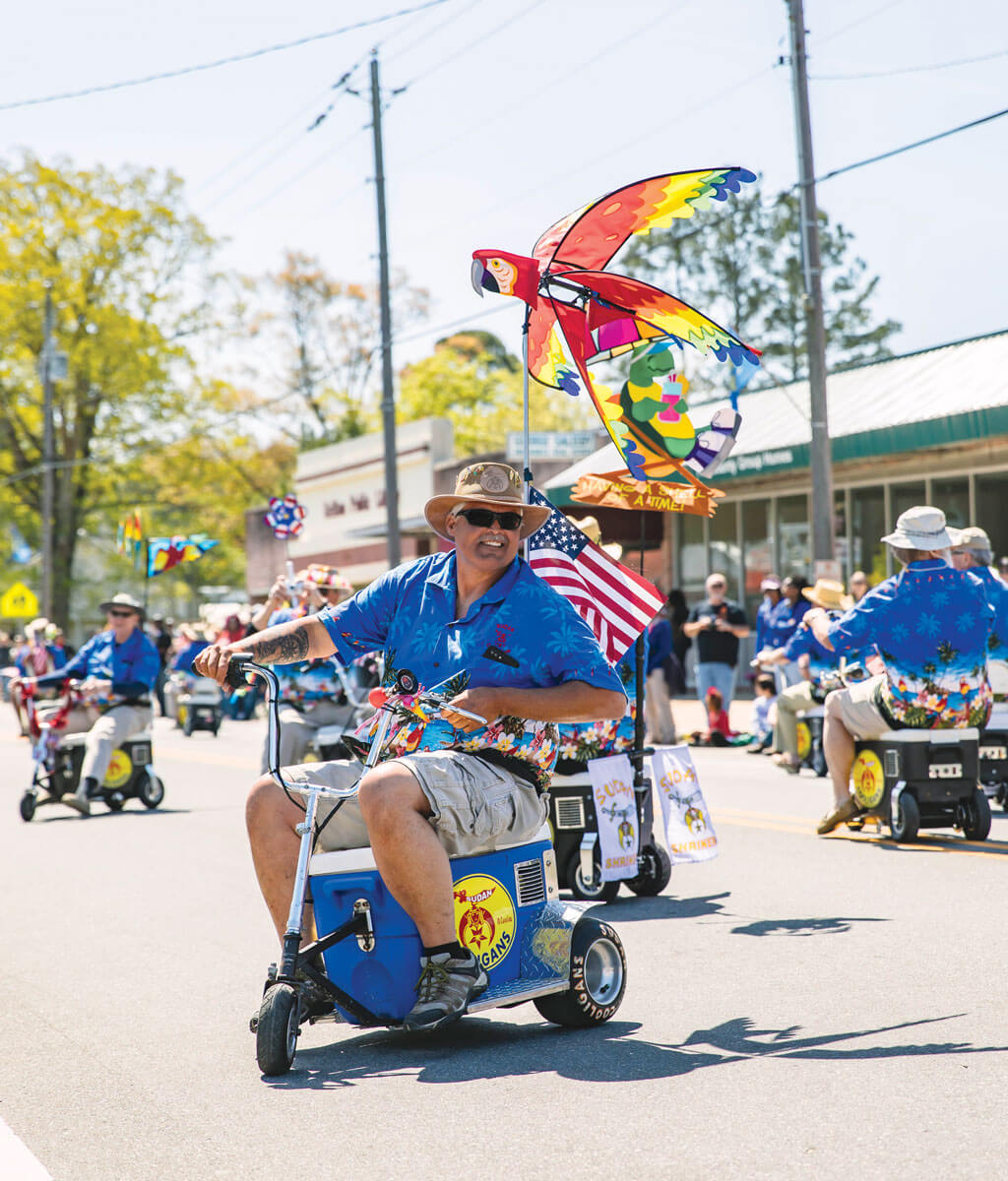 Cooler-riding Shriners are a sight to see. photograph by Geoff Wood

When the festival is over, people head home. Many leave town. But every year, some of them return. When Piggly Wiggly pulled out of Grifton after Matthew, town leaders lured a new grocery chain called Tropicana. A soon-to-be-finished bypass will make Greenville’s hospital, and its jobs, a shorter commute to Grifton than some parts of Greenville itself. And after the loss of people and industry, the town annexed a brand-new solar farm, the second largest in North Carolina. It sits on the fringe, generating electricity on nearly three-quarters of a square mile of farmland. The solar panels brought in hundreds of construction workers and a financial shot in the arm.

The struggles and solutions are out of sight during the festival, which runs on a shoestring and yet winds up being the thing that binds everyone together.

Tommy, in the shade of a tent, watches people starting to set up for the first musical act of the afternoon. From here, he can see a steady stream of people walking down Queen Street, stopping in front of the railroad depot, saying hello, and recognizing each other. For some people, it’s been a few days. For others, years. “People come back home,” he says. “Just like the shad, they come back.”