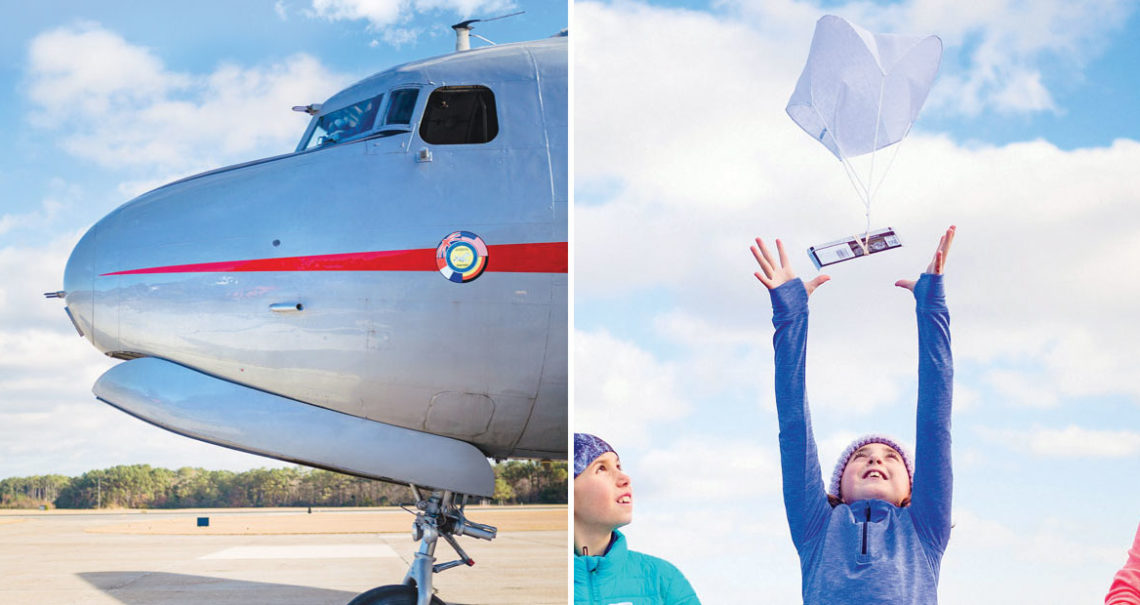 undreds of children stream across the field next to Dare County Regional Airport, tripping over the stiff December grass, heads tipped skyward, as the Spirit of Freedom, a refurbished World War II-era Douglas C-54 Skymaster, approaches from the east. The wap wap wap of its hefty propellers thumps in their chests. Those with experience at Manteo’s annual Candy Drop race ahead to the spot where last year’s flurry of chocolate and bubble gum landed. As the plane finally roars overhead — low enough to see the flight crew grinning from the windows — it releases 700 tiny white parachutes: bits of fabric tied with string, each holding a single piece of candy. A cheer erupts. The scramble is on.

Parents clustered around the field appear just as delighted as their kids. Who knew that, more than a century after the first flight at Kitty Hawk, an old rumbling airplane could make so many feel joy, even wonder? Standing off to the side, 78-year-old Karin Edmond wears a smile more knowing than most. Edmond grew up in Berlin during World War II, a little girl who wore the same polka-dot dress every day for two years and went to sleep each night unsure who or what to fear most: Hitler or the Allied bombs meant to stop him. “I wanted to forget my childhood,” she says, her German accent still apparent. “We didn’t grow up as normal 5- or 6-year-olds.” 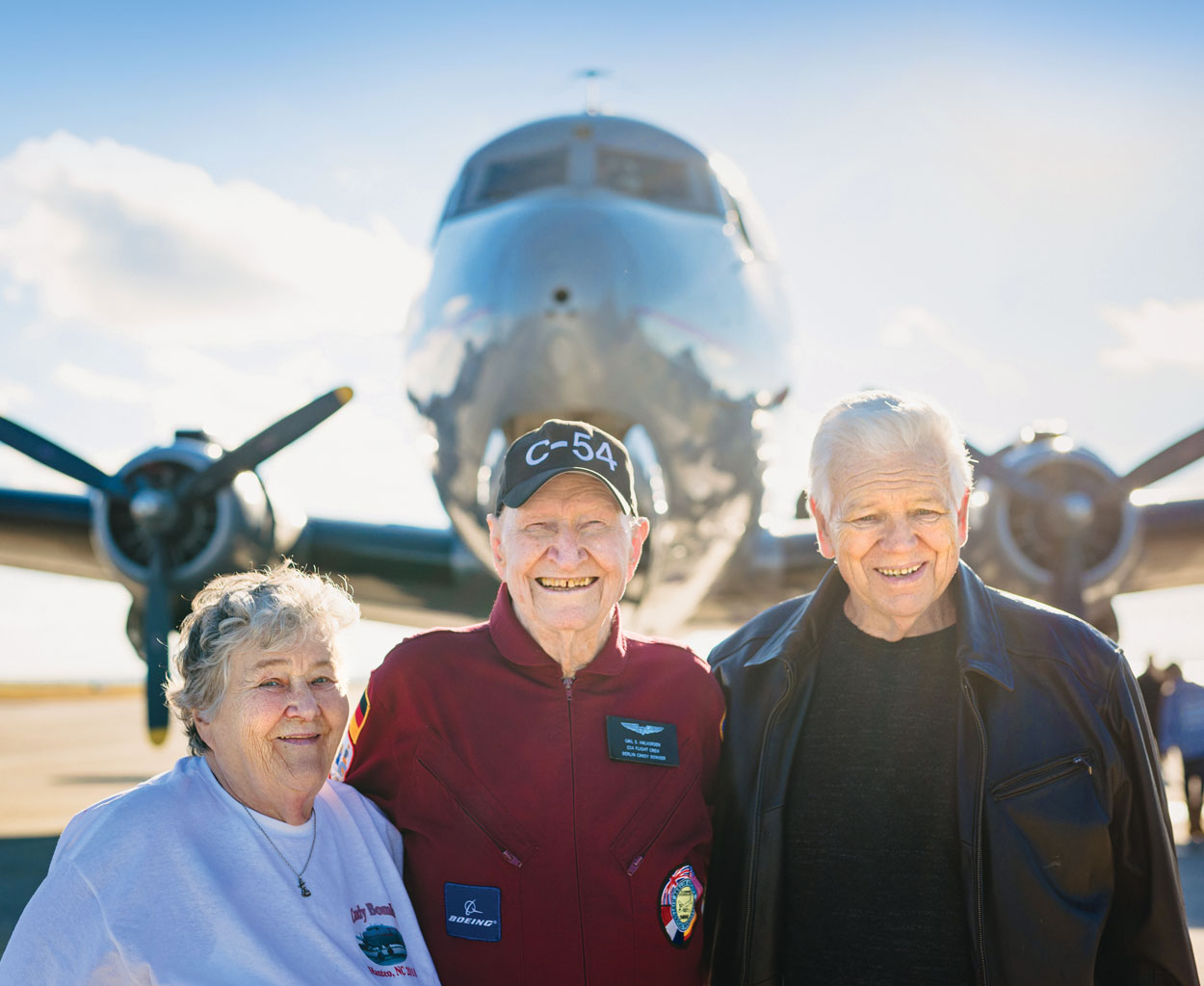 Karin Edmond (left) brought together Col. Gail Halvorsen (center) and Rudi Arndt to share their wartime memories. This year, after Manteo’s Candy Drop, Halvorsen will be inducted into the Wright Brothers Hall of Fame in Kitty Hawk. photograph by Baxter Miller

Years later, Edmond married a U.S. serviceman, moved to the United States, and had five children of her own. But, she says, “I never told anything about [the war years] to my children.” By 1999, she was divorced and living on Roanoke Island, where she worked as a cook. That Christmas, Edmond’s daughter heard about a candy drop featuring a World War II transport plane at the Dare County airport. She took her mother to see it, and Edmond recognized the C-54 before she even saw it.

“I heard the engine roaring, and I thought, ‘Oh my God, am I going back in time?’” she says. Nearly 20 years later, Edmond stands in the same field at the Manteo airport, the thunder of the C-54 engines overhead, and one particular memory from childhood comes back to her: a good one. A hopeful one. A memory worth saving.

In the summer of 1948, Edmond was about to turn 7. The war was over, but Berlin was still in shambles, and, for Edmond, there was a new fear. “We were always afraid the Russians were coming,” she says. Germany had been divided into four military zones by the U.S., Britain, France, and Russia. The city of Berlin ended up in Russian territory, but because of its importance, it, too, was divided equally into four zones. West Berlin became a powerful island of free enterprise in the middle of Communist territory, but on June 24, 1948, Joseph Stalin blocked access to West Berlin. The two million people living there, including Edmond and her family, were trapped without enough food and critical supplies. The moment was known as the Berlin Blockade.

“You’re darn right we were hungry,” Edmond recalls. “That’s a pain you never will forget.” That summer, her mother put Edmond and her siblings to bed at 6 every night so that they wouldn’t burn calories. To whispered requests for an extra slice of bread, she’d simply respond: Children, what do you want to eat tomorrow?

As days passed and the summer heat rippled through the war-torn city, the Western powers agonized over how to help the stranded citizens now in their care. The Russians had blocked roads, canals, and railroads, but they’d overlooked the fine print of a binding postwar agreement that gave no country sole control of airspace.

Hearing the engines was “music to our ears. We knew they were going to give us food. It was survival.”

Gail Halvorsen, an Air Force transport pilot who had ferried cargo in the South Atlantic during the war, would become a key player in helping bust through the blockade. Halvorsen had grown up on a sugar beet farm in Utah, where he fell in love with flying by watching biplanes buzz over his family’s fields. He was just the kind of pilot needed for “Operation Vittles,” the West’s audacious plan to airlift food and supplies through narrow airspace corridors, under the nose of the Russian military, into Tempelhof Airport in the heart of West Berlin. Planes took off and landed every three minutes. Supplies were quickly unloaded by grateful German citizens. “There was an expression of humble gratitude,” Halvorsen wrote years later, surprised by how easy it was to aid a former enemy. “The look in their eyes was unmistakable. No matter what had gone on before, they were individuals — human beings.” 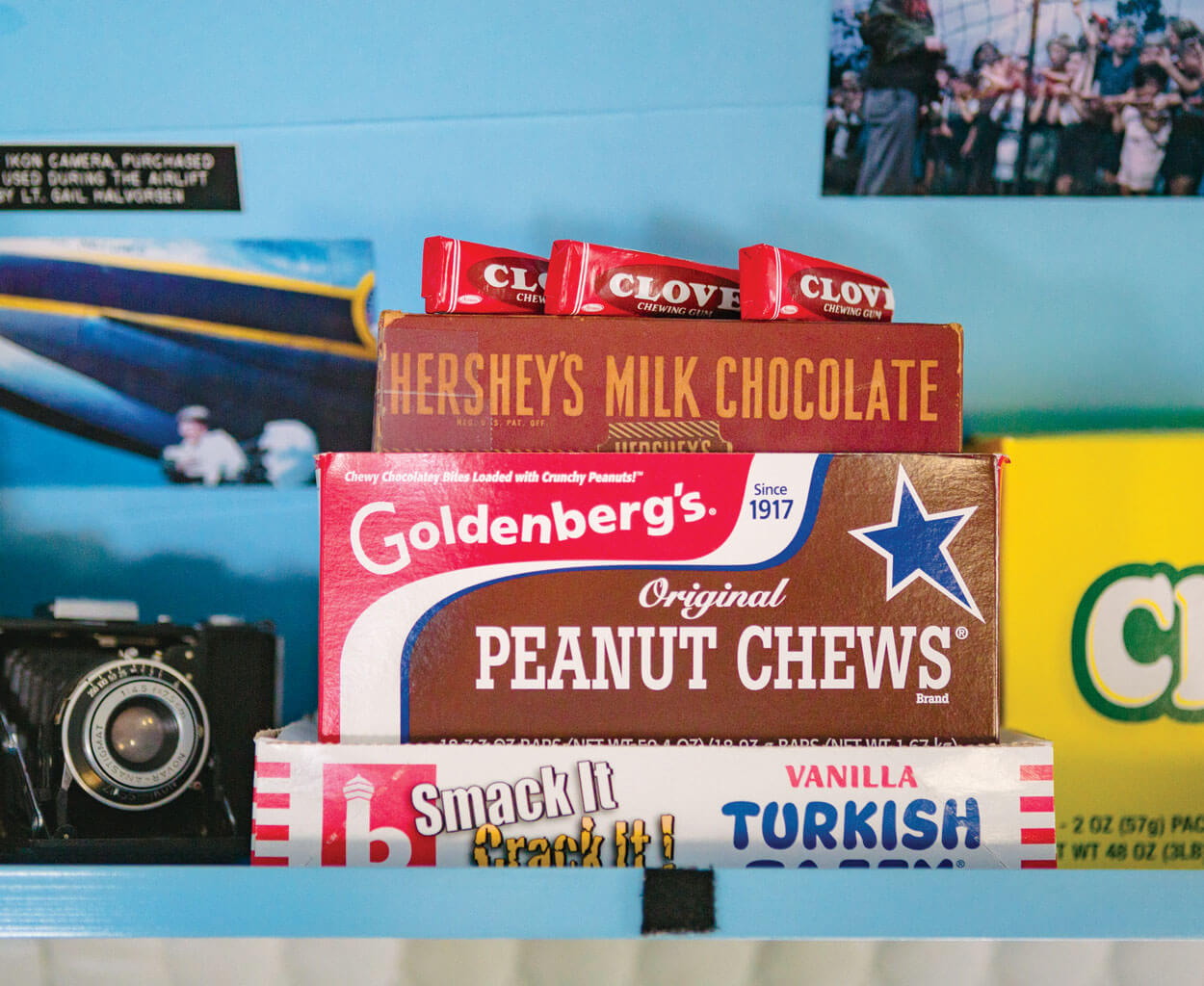 A surprise delivery of these vintage treats, dubbed “Operation Little Vittles,” cheered the spirits of children in West Berlin during the lifesaving airlifts in 1948 and 1949. photograph by Baxter Miller

As a child, Edmond watched the lifesaving planes from her apartment window. Hearing the engines approach “was music to our ears,” she says. “We knew they were going to give us food. It was survival.”

Adventurous kids snuck down to the grassy field by the Tempelhof runway to watch through the barbed-wire fence. One afternoon, Halvorsen spotted a group of them lingering there and passed two sticks of Doublemint gum through the fence. He watched in amazement as they carefully divided up the meager offering. Those who didn’t get gum split the sugar-scented paper, which they pressed to their noses.

Each tiny white parachute represented hope, a reminder that the poor and hungry were not forgotten.

The next day, just before landing at Tempelhof, Halvorsen chucked three small parachutes — cloth handkerchiefs tied to a single piece of chocolate — through the flare chute in the cockpit. He wasn’t sure where they landed, but the next day, he borrowed handkerchiefs from his friends and did it again. The German government thought the idea was marvelous, and Halvorsen’s commanding officer let the candy drops continue. The children of Berlin flooded the U.S. base in Rhein-Main with thank-you letters addressed to “Onkel Wachelfluge” — Uncle Wiggly Wings — because Halvorsen would wiggle his wings on approach. Some returned handkerchiefs for reuse. Halvorsen and his fellow pilots even got away with dropping a few candy parachutes over East Berlin, before the Russians complained. Meanwhile, donations poured in: Paris bubble gum, Hershey bars. The Jewish vice president of Huyler’s Candy Company sent crates of sweets for the German children. “Operation Little Vittles,” as the candy drop was called, rained treats on Berlin until the blockade ended the following May.

Seven-year-old Edmond never caught a piece of candy from the planes, but that mattered less than the fact that others did. Each tiny white parachute represented hope, a reminder that the poor and hungry were not forgotten.

Every year since 1999, the Spirit of Freedom — a C-54, just like the one that Halvorsen flew — has swooped into Manteo for the Christmastime Candy Bomber reenactment. Uncle Wiggly Wings makes an appearance, too. For years, Colonel Halvorsen, still spry at 99 years old, has traveled the country with the historic plane, now piloted by its owner, Tim Chopp.

Edmond reached out to the colonel in 2003, inviting him to town for their event, which she now organizes. The first candy they exchanged, she gave to him. Since then, the two friends have reunited almost every Christmas. But this December, she stunned him with a surprise visitor during the welcome reception at the Dare County community center two days before the Candy Drop. As the band played holiday tunes, Edmond — known affectionately around town as “the German Lady” — greeted folks at the door and made sure there were enough folding chairs for the growing crowd. Halvorsen and the crew were cheered onto the stage and began taking questions. That’s when Edmond called out: “Rudi, would you please come up?”

Four rows back, a silver-haired gentleman stood up tentatively, gripping a handkerchief. “Rudi is one who got candy from you in Christmastime 1948,” Edmond announced.

“I can’t believe it!” Halvorsen exclaimed, leaning forward to better hear the man who said he’d waited 70 years to thank him. “God bless you,” Halvorsen said. “Were you from Berlin?”

Rudi Arndt answered, his voice slightly shaky in front of the crowd: “I didn’t live in Berlin. I was born in what today is Poland.” Arndt was nearly 5 years old when his family fled their village in the night, young Arndt bundled up on a sled. For several years, they traveled from town to town on foot, staying here and there, begging for food from farmers. In December 1948, when he was 8 years old, his family walked into East Berlin and holed up in a wrecked house. Local kids told them about candy dropping from parachutes in West Berlin, so he and his siblings went looking. “We actually saw the airplanes and the thousands of little parachutes,” he told the stunned audience in Manteo. “Some of the West German kids got hold of the candy, felt sorry for us, and threw it over.” 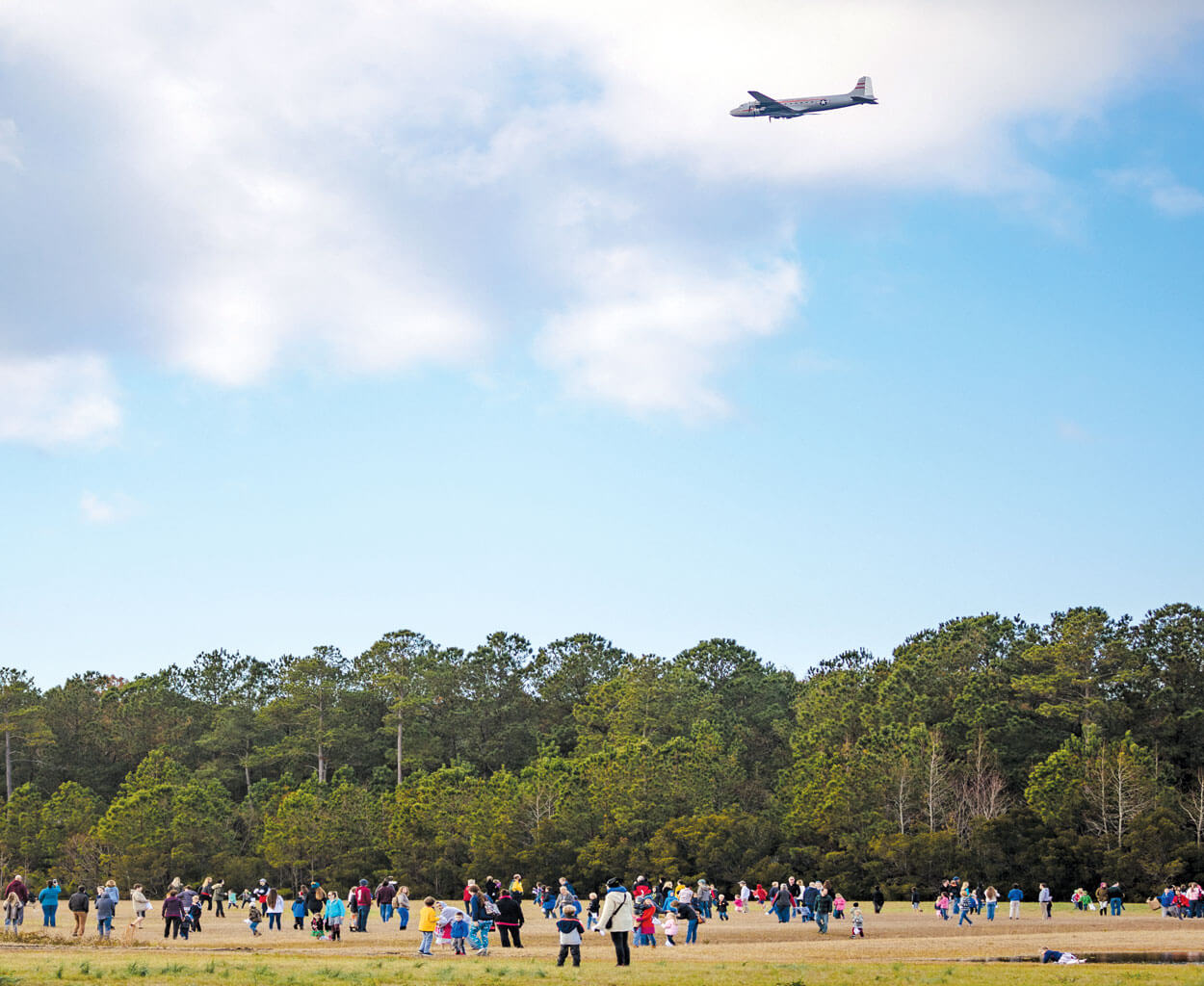 Each December, hundreds of people scamper around the field at Dare County Regional Airport in Manteo as tiny white parachutes attached to chocolate and bubble gum drift down. photograph by Baxter Miller

Moved by the acts of kindness he experienced as a boy, Arndt went on to study theology, and now lives in Florida with his wife. They were visiting her family in Wanchese in December 2017 when, to his utter surprise, someone told them that the Candy Bomber was in town. The next year, he came for a visit again, and a friend connected him with Edmond. The two met at the McDonald’s in Manteo and shared stories in German for hours. At times, the memories rushed out faster than the words.

At the airport, Arndt and Edmond stood side by side as Halvorsen and the crew took off in the C-54. Arndt’s great-niece and -nephew and Edmond’s grandchildren and great-grandchildren dashed onto the field. Two of Halvorsen’s children, now grown, were there, too. When the parachutes opened, some of them floated gracefully into outstretched hands. But a batch of them got tangled up as they exited the plane and fell to the ground, cardboard box and all. Kids scampered to the box and immediately began passing the candy around, one piece each. No arguing. Only gratitude. Like magic, a simple gesture of generosity had multiplied into many once again.