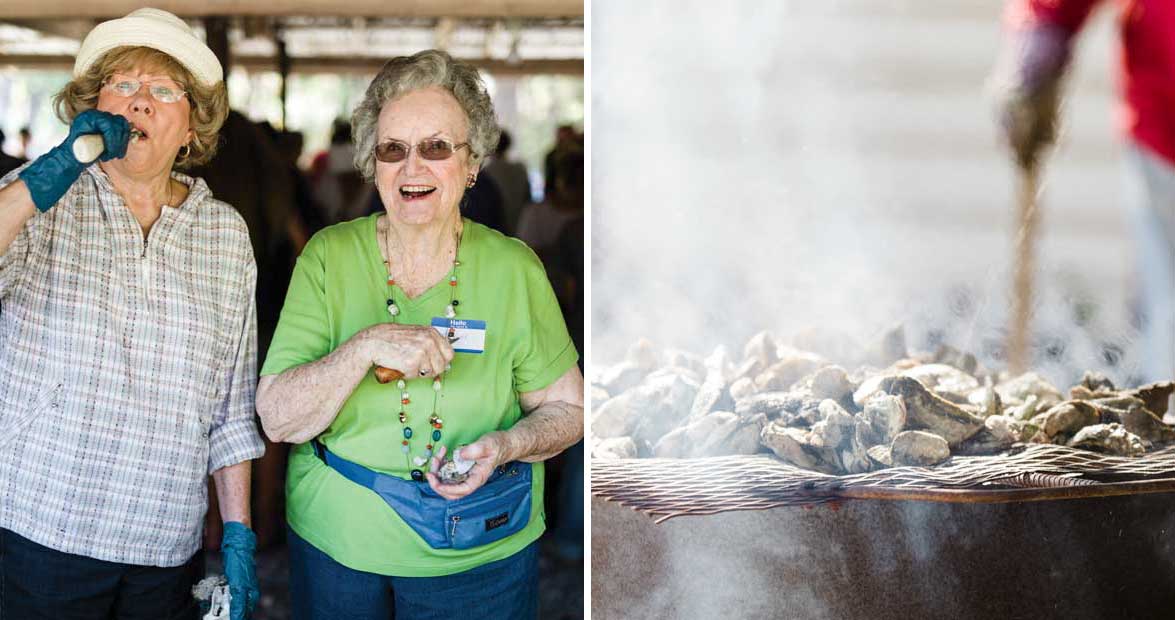 It’s only right that Marlene Varnam makes the name tags; she knows everybody in town. The oyster roasters and the bucket boys, the cornbread and pickle girls, the greeters and all the countless cousins waiting with their oyster knives handy — everyone knows her as Ms. Marlene. At age 81, and after 62 Dixon Chapel Oyster Roasts, she knows who needs to do what and how to feed the hundreds of hungry visitors who will make their way down two-lane Varnamtown Road to line up under the live oaks for a noontime supper. Her perm is fresh for the occasion, and her long, shell-beaded necklace clanks against the table as she quickly writes names. “The roast is almost like a family reunion,” she says in between hugging arrivals. “Everyone always comes home for this.”

On sunny November mornings like this one, oyster roasts are happening all along the coast. The 63rd annual Dixon Chapel Oyster Roast in Varnamtown is the oldest public oyster roast in North Carolina. There are 12 notable ones in the eastern part of the state, each with their own storied histories and loyal visitors. Not only do the roasts bring locals back home, but out-of-towners from far and wide come for the experience, too, which is a blessing for small congregations like Dixon Chapel that rely on the roasts to fund everything from sanctuary repairs to filling up the gas tank for youth-group trips. But mostly, these roasts have become coastal community institutions, with everyone in town involved.

At Dixon Chapel, half of the oyster roasters aren’t even church members, but at this point, they all know what to do. The roasters have been trained since boyhood, earning their spots around the fire by the time they’re men. This year’s volunteers are gathered around the open barrels, building great oak-wood fires. They’ll hoist the grates — made by a first-time visitor from Clinton, who heard about the roast from a friend — and the oysters will cook on top, their brine hissing on the hot coals. That much never changes.

The daughter of a fisherman, farmer, and oyster lover called “Shucky,” Ms. Marlene has lived in Varnamtown her whole life. For the past 63 years, she’s lived across the street from the church itself. Her family, the Dixons, donated the land that the chapel was built on in the 1920s.

Ms. Marlene’s oysterman husband, Carson Varnam, was her high school sweetheart, and they were married for 53 years before he passed. She still lives in the house they built from the lumber that Hurricane Hazel “provided,” she says, using house plans she’d drawn up during a high school senior project. Her high school ring, bought with tobacco barning money, still fits, too, and shines on her finger as she writes the last of the name tags. Noon is approaching, and the line of oyster eaters, waiting with their oyster knives and gloves, has already reached the road.

This year, just like last year and every year since 1965, the oysters are provided by Carson Varnam’s Shellfish Market, which is across the road from the chapel, in Ms. Marlene’s front yard. Her grandson, 40-year-old Mikey Fulford, now runs the business. All day yesterday, Ms. Marlene watched from her window as Mikey hosed down the muddy oysters in her yard, and today, Mikey’s been driving them across the road in shifts: precious cargo, these Lockwood Folly oysters. 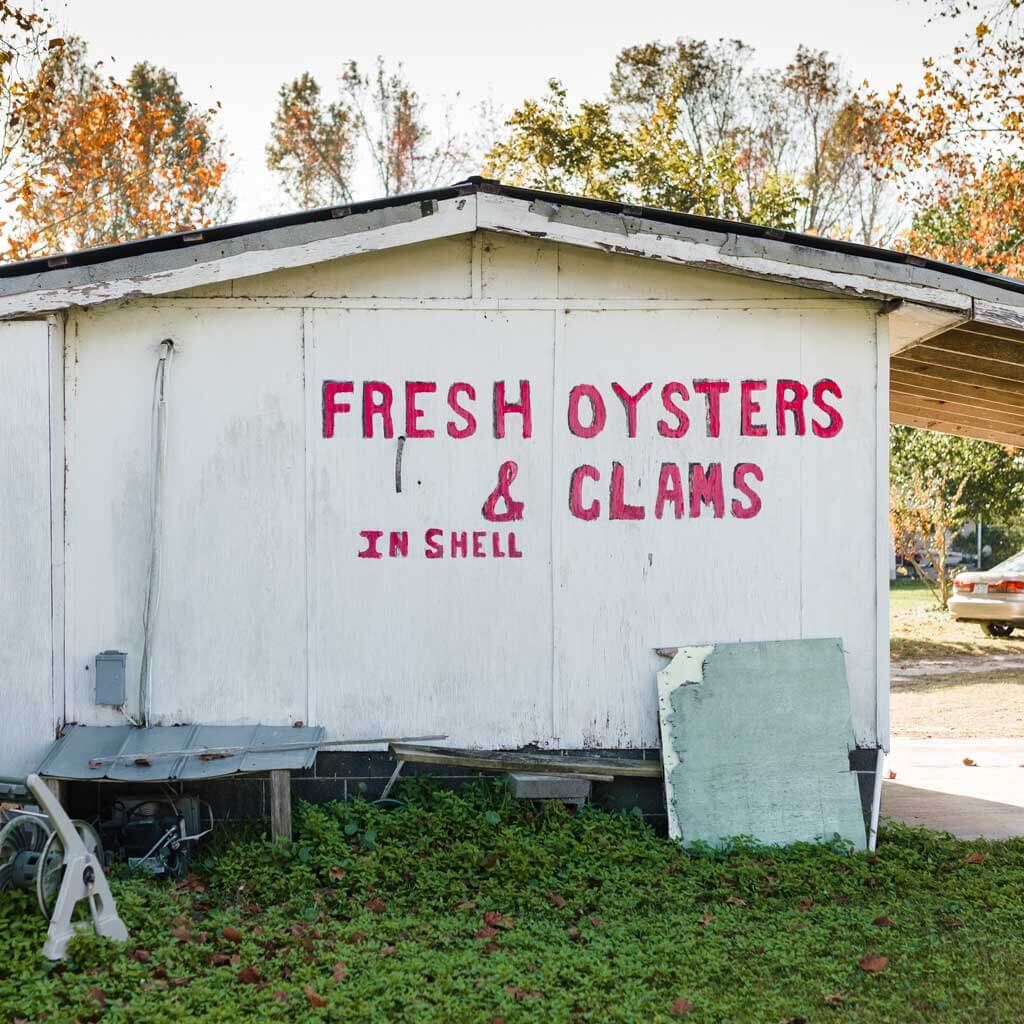 Carson Varnam’s Shellfish Market, located across the road from Dixon Chapel, provides oysters for the roast. photograph by Baxter Miller

The Lockwood Folly River empties at Varnamtown, creating a freshwater and saltwater mix that gives the Lockwood Folly oyster a bright, briny flavor. “People ’round here, you couldn’t give them an oyster from Louisiana or Chesapeake Bay,” Mikey says. “They’ll go toss them in the driveway because they’re not salty. Even though those oysters are much bigger and prettier — they’re beautiful oysters — people ’round here just won’t eat them.” 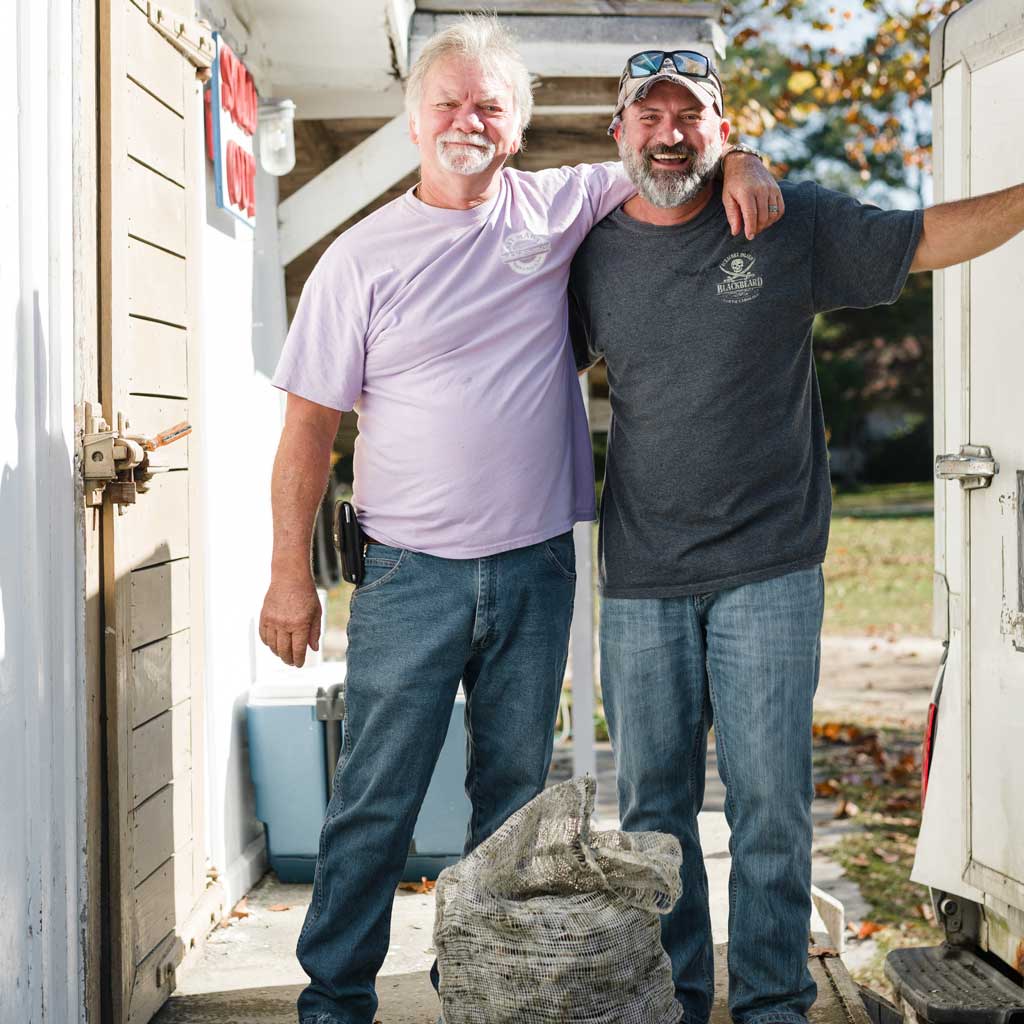 As a child, Ms. Marlene and her family gathered the oysters right out of the water and roasted them on the shore for picnics. In Varnamtown, Lockwood Folly oysters are always served the same way, with hot pepper vinegar, fried cornbread, and sweet pickles. The tradition remains unquestioned, as if it’s common sense. The flavors, like the people, bring out the best in each other. Or, as Ms. Marlene says: “People like the sweet of the pickle to go with how salty the oysters are.”

A crowd 600 strong has turned out for the roast, driving in from Virginia and South Carolina, Charlotte and Raleigh. The church’s parking lot is full, as is the cornfield next door. Yet despite the inevitable success — they’ll raise thousands of dollars — every year there’s talk of it being the last Dixon Chapel Oyster Roast. This has been the case ever since Mikey can remember, but the past few years have gotten even more difficult. With a congregation of about 60, Dixon Chapel relies on community volunteers. But the town’s population is only about 580, so recruiting enough people isn’t easy. The oysters are harder to come by, too. And the few people left in the oystering business have to travel farther to get the shellfish.

“We were just tickled to get enough this year,” Mikey says. He and a dozen other oysterers rustled up some 250 bushels. In his granddad Carson’s time, 250 bushels were easily gathered in a day. Mikey and his crew tried to collect as many as they could from Lockwood Folly, but most came from Topsail and Wrightsville Beach. They didn’t know whether they’d have enough until a couple of days before the roast. Ms. Marlene says they’d all been praying and God had “shined a light.”

Pastor Bill Negron emerges from the crowd and makes his way to the oyster eater line. He opens the roast with a prayer, and the eaters settle in under the open shelter behind the church, built for shucking. Long, wooden plank tables are spaced apart for standing room, though many bring chairs. As if in a graceful dance, the roasters pair off, lift the heavy grates filled with oysters from the fire, bring them under the shelter, and dump the steaming shellfish onto the tables. The eaters know just when to give way and just when to begin eating. No one has to yell “Look out!” or say “Excuse me.” It’s as if every move is inherited and understood. 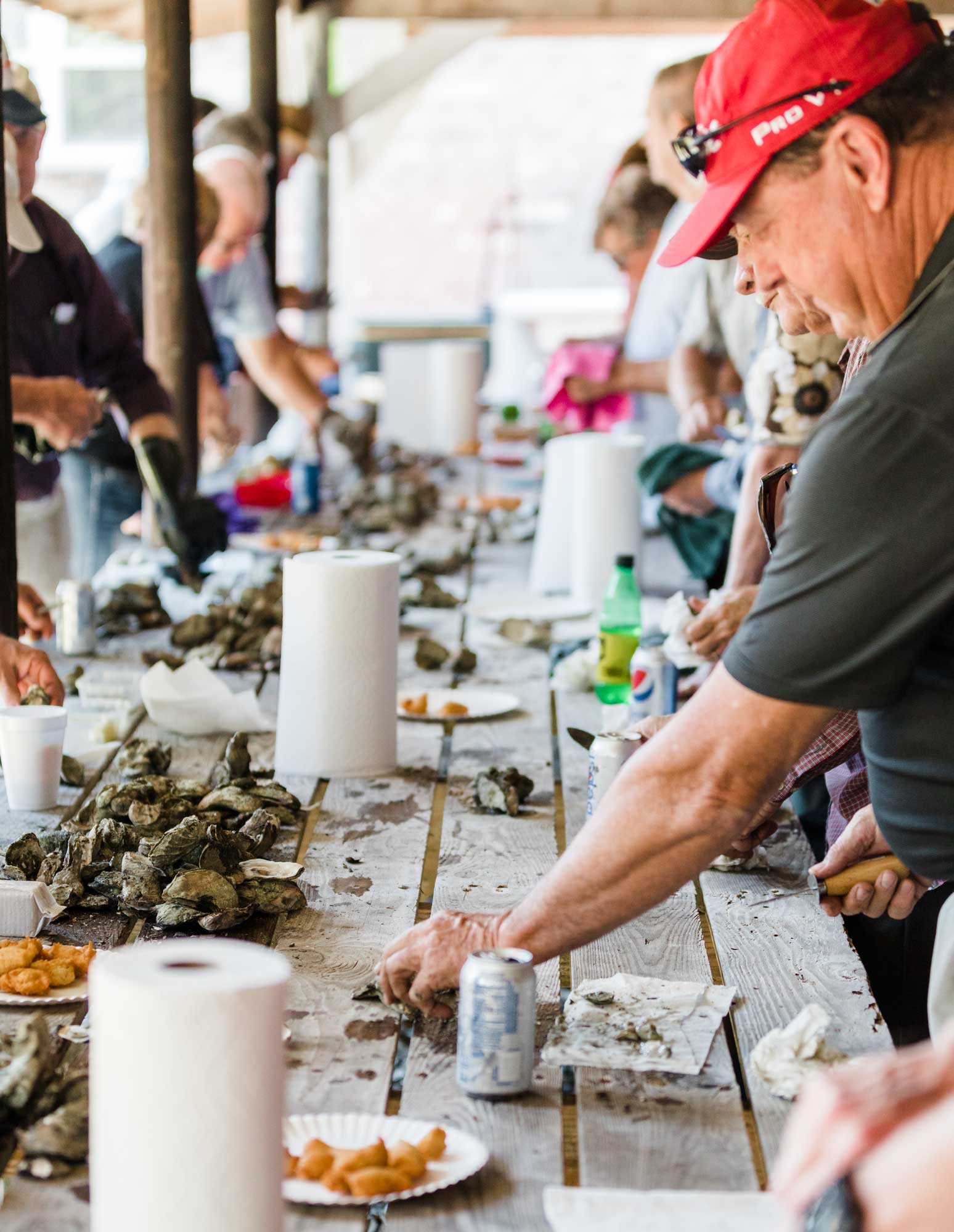 Standing room only: Oyster lovers from as far away as California packed the tables at the 63rd annual Dixon Chapel Oyster Roast in tiny Varnamtown, population 580. photograph by Baxter Miller

Little girls in aprons bring bowls of vinegar and pickles and plates of fried cornbread to the tables. Oysters are cracked open, scraped out, and dipped in vinegar; pickles and cornbread are chasers. As shells pile up, boys arrive with buckets to collect them. A changing wind blows smoke from the fires to the tables, and then it shifts again. All of this is happening in sight of the church graveyard where Carson and the rest of Ms. Marlene’s family are buried.

Ben Lewis sits and shucks with his cousin Don Sellers, who just turned 80. They’ve been coming to the roast every year since they were teens growing up in Supply. Ben laughs that one year, they ate so many oysters they embarrassed their mothers. “They were so good, I couldn’t stop,” he says. Across the table, their pal Ron Farmer, a barber from Charlotte, is working his way through his pile of oysters just as he has for 33 years. One of Ron’s clients has flown his plane from Matthews to be here with them. “It’s not quite like a family reunion,” Don says. “But near about that.”

Ms. Marlene is still flitting about, visiting with distant cousins and old friends. Occasionally, an oyster catches her eye, and she stops long enough to crack it open. And then she’s off again. She finds the unofficial “Oyster Queen,” Sabrina Varnam, who is also kin to everyone. After growing up in Varnamtown in a family of shrimpers and oysterers, Sabrina left for college and honored her home by studying sustainable fishing practices and coastal ecosystems. A few years ago, she was asked to give a speech about oyster shell recycling to 400 people at a Carolina Recycling Association Conference. “I thought, ‘What can I do that’ll make all these people pay attention to me and remember what I say?’” she says. The answer came to her, in her own Varnamtown way: She made a tiara out of Lockwood Folly oyster shells to wear during her speech. “And gosh,” she laughs with pride, “everyone sure did listen.”

Sabrina was once one of the little girls handing out cornbread. She has a 4-year-old now, and she can’t wait for him to be big enough to eat oysters. “I want him to understand our marshes and estuaries,” she says. “I want my son to grow up and appreciate the water, family history, and culture. It’s a dying breed.”

Back at the roasting barrels, it’s the younger, quicker men who are lifting the grates and carrying oysters to the tables. The older roasters tend the fires; many of them are the last shrimpers and oysterers of Varnamtown. Roaster Kenny Hewett says that a couple of years ago, the last boatbuilder in Varnamtown retired. He pulls a card from his wallet. On it is a picture of his boat, one the builder designed: Folly Girl, gliding on the river, the water reflecting shimmers on her hull.

There’s no way to live without loss, and the folks in Varnamtown know that all too well. Mikey worries about the disappearing Lockwood Folly oyster. “It’s a shame because it’s one of the best oysters you can get anywhere,” he says. Ms. Marlene is concerned that she’ll see the last of these oyster roasts one day. “Every year, we wonder if we’re gonna be able to keep doing it because there’s getting so few of us,” she says. But not today. Today, the tables are packed, the roasting grates heavy. Today is about arrivals. And everyone is full.