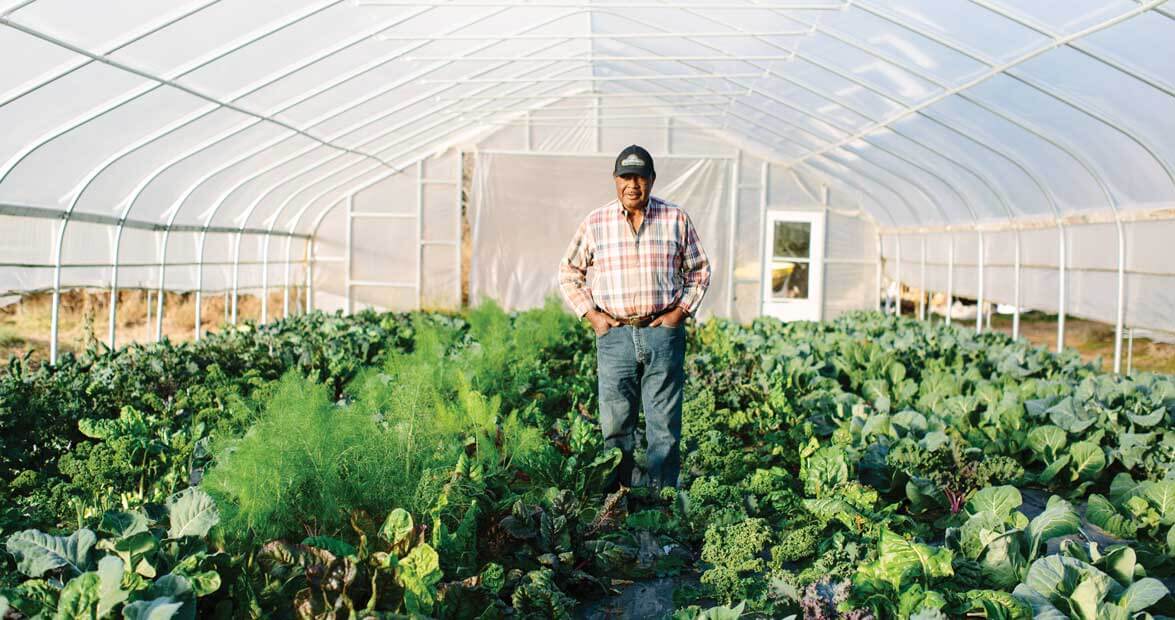 This year, at 70 years old, Stanley Hughes bought himself a bicycle. The last one he owned, when he was a kid, he stashed at a neighbor’s house to keep his mother in the dark about his escapades. This one he rides for physical therapy, an answer to a lifetime spent bent over tobacco fields.

Hughes has never been one to complain about much, aches and pains included. His days spent walking behind a mule and a plow when his dad ran the farm? “Not so bad,” he says. Getting sent out to the fields with his brothers to do “side dressing” — dropping a handful of fertilizer and manure beside each stalk of tobacco — by hand? “Fun, in a way.”

Today, Hughes drives his white 2004 Chevy truck over the soft, pebbly hills of Pine Knot Farms in Hurdle Mills, just north of Hillsborough. He stops to call three bristly pigs out from the shrubbery near an old two-room Rosenwald school and the barn his dad built during a 1940s barn raise.

The mules are gone now, but a lot of things have stayed the same for this third-generation farmer. Men still bend over the rows of tobacco, hand-cropping the leaves as they did after Hughes’s grandfather bought the land in 1912. And following the explosion of summer produce, Hughes still takes pride in the five varieties of sweet potato that he and his wife, Linda Leach, enjoy cooking up every fall.

In their little kitchen, the pair experiments with the white O’Henrys, the Carolina rubies, the Burgundies, and the orange Beauregards that they whip up into a scrumptious homemade three-layer sweet potato cake. Leach can tell you exactly the right way to bake a sweet potato. And she and Hughes’s sister finally figured out how to fix the farm’s vivid, violet-fleshed potatoes into the perfect purple sweet potato pie. (The secret? Instant vanilla pudding.) 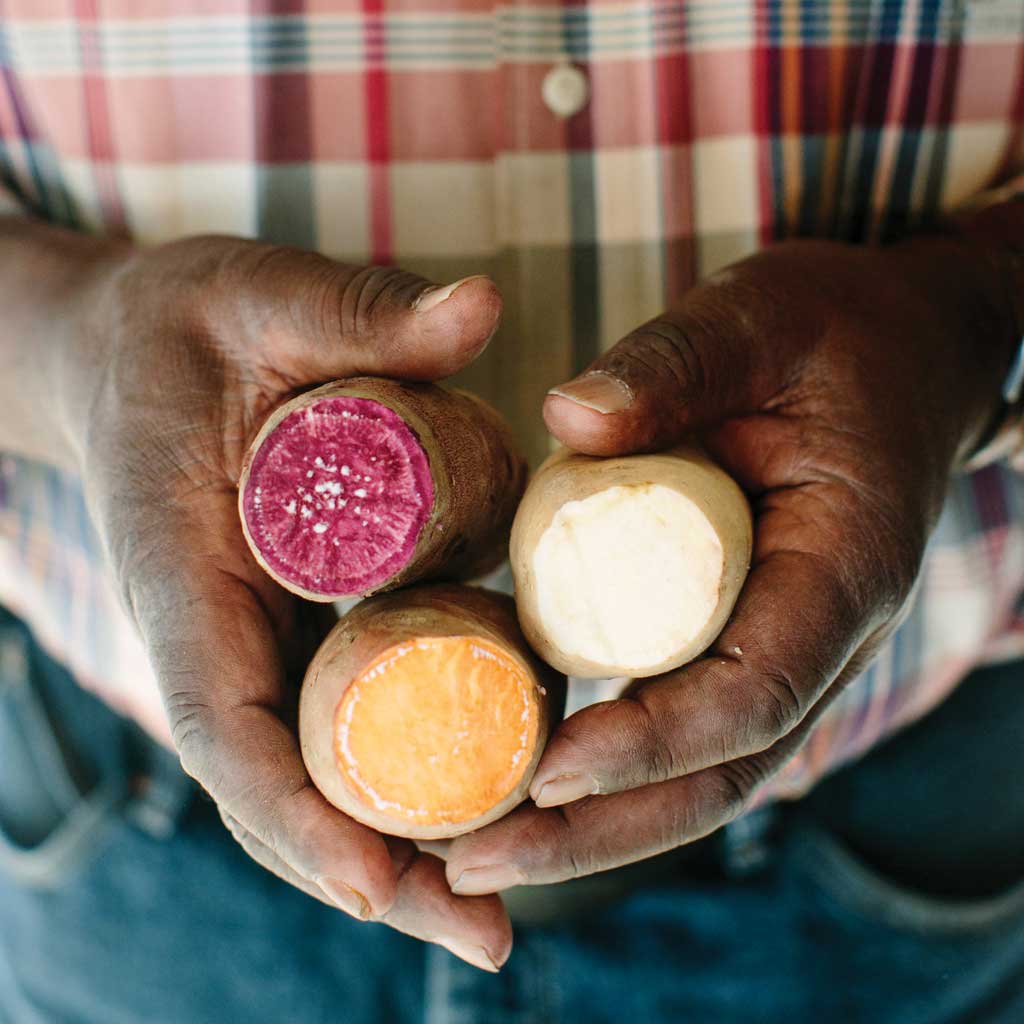 Hughes has a secret, too. Every autumn, he brings buckets of sweet potatoes into the tobacco barn to cure in wooden crates at a temperature his daddy taught him, one that even Leach can’t get him to share. When it’s time, he turns off the heat and cracks the door open so the tubers don’t overcook — a method Leach calls the “old-time way.”

“They have fancy buildings with humidifiers in them today and computerized heat and air controllers,” she says to Hughes. “You have none of that! You’re still doing it the primitive way. But they taste better than anybody else’s.”

It’s not only the barn-cured sweet potatoes that have gotten attention. The farm’s collard greens were heralded in a 2003 issue of Gourmet magazine. Hughes won North Carolina A&T’s Small Farmer of the Year award in 2004 for his willingness to innovate on the farm and his success at doing so: Pine Knot Farms was the state’s first African-American-owned farm to be certified organic, in 1996. And Hughes earned bragging rights again in 2013 as the Carolina Farm Stewardship’s Farmer of the Year. 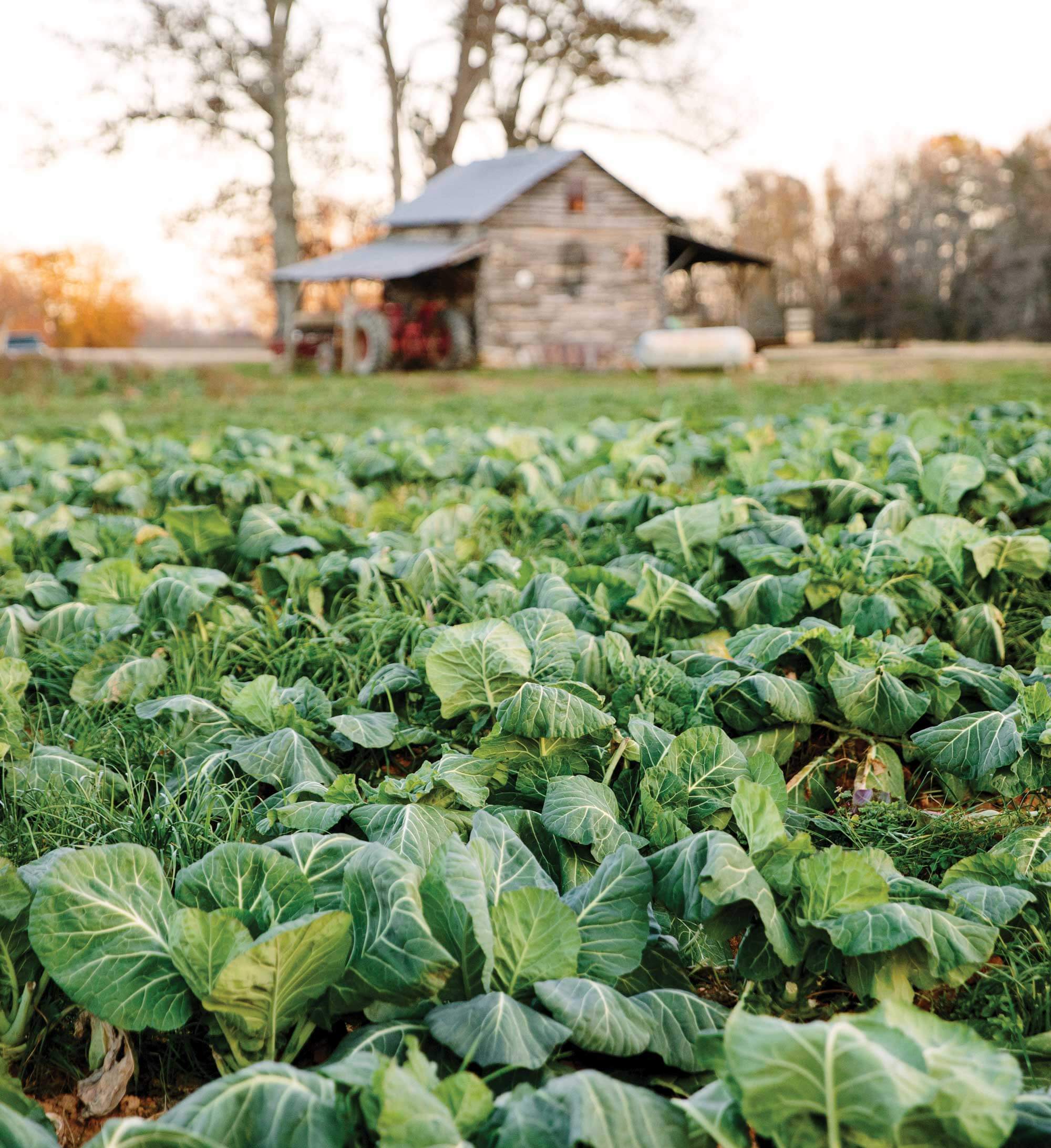 For all the ways that Hughes and Leach have kept Pine Knot Farms moving forward, it remains deeply rooted in the past. The organic tobacco is cured the old-fashioned way: in rack barns they’d replace if only they could afford to mechanize. It’s the first day of tobacco pulling, and one of the jacks that lifts the racks of leaves up and into the barn is out of alignment. From his perch atop the barn, one of Hughes’s farm workers tosses down a screw, and Hughes bends stiffly to retrieve it.

These are local workers, some of whom have criminal records and find it hard to land jobs elsewhere. Hughes makes a point of hiring them, “so they have a piece of change in their pockets,” he says. He understands when they have to miss work for court dates, and has even taken the truck to go pick them up. Leach buys them snacks and hand towels, and once or twice a year, she cooks a big meal for everyone to share. That’s because the pair takes another approach to farm life that will never be outdated: Do unto others as you would have them do unto you.

“It’s the little things you do for people,” Leach says. “It’s something we do sincerely. From our hearts.”

“Everybody needs somebody,” Hughes says. “We never know when we’re going to need some help.”