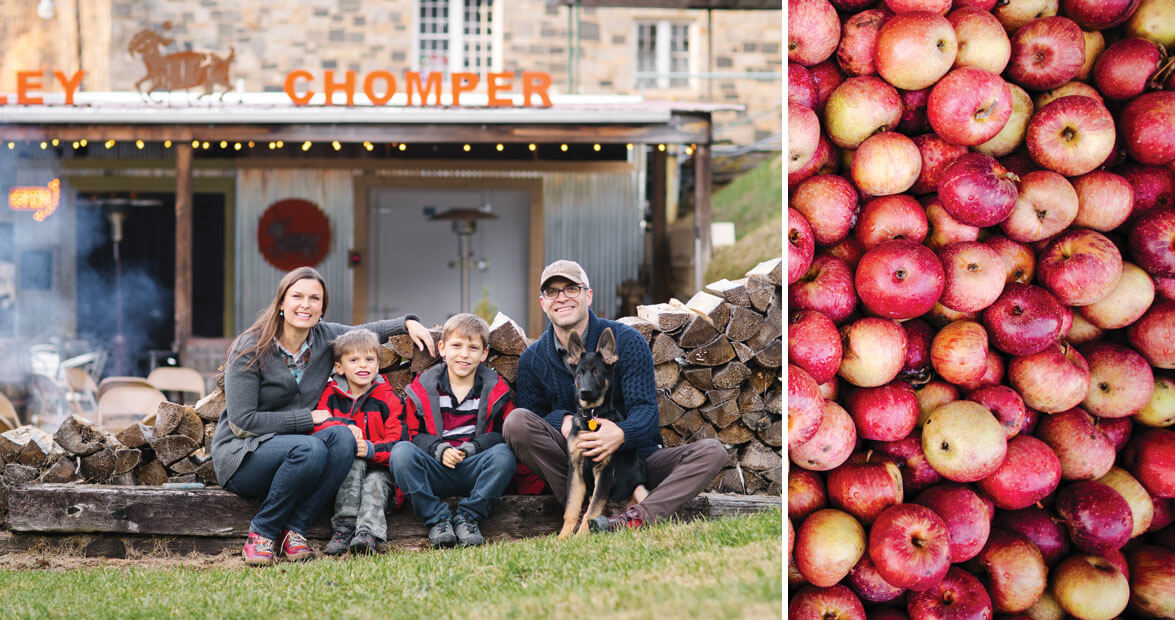 A pipe dangles from the corner of Everett Cole’s mouth, poking out from his full gray beard, while his fingers wrap around a glass of bubbly gold cider. Scents of firewood and apples fill the air and country music floats down from the speakers as patrons gather around tables on the patio at the Molley Chomper cidery.

Everett sits in front of a firepit next to his wife, Jenny, both of them dressed in thick coats. During the colder months, it’s usually locals and loyal cider fans like the Coles who gather outside Kate and Tim Arscott’s cidery in the evening. Sometimes they bring a pizza from Pie on the Mountain, a local restaurant, to eat while they sip flights of cider; sometimes they play bocce ball; and sometimes, like the Coles, they gather around the firepit.

This is a weekly outing for the couple from Lansing. “Kate and Tim have done an outstanding job doing what they’ve done here,” Everett says, putting aside his pipe to take a sip of Mountain Maelstrom, a cider made from a sweet blend of Virginia beauty, wild crab, and limbertwig apples (among others). “All their ciders are delicious.” 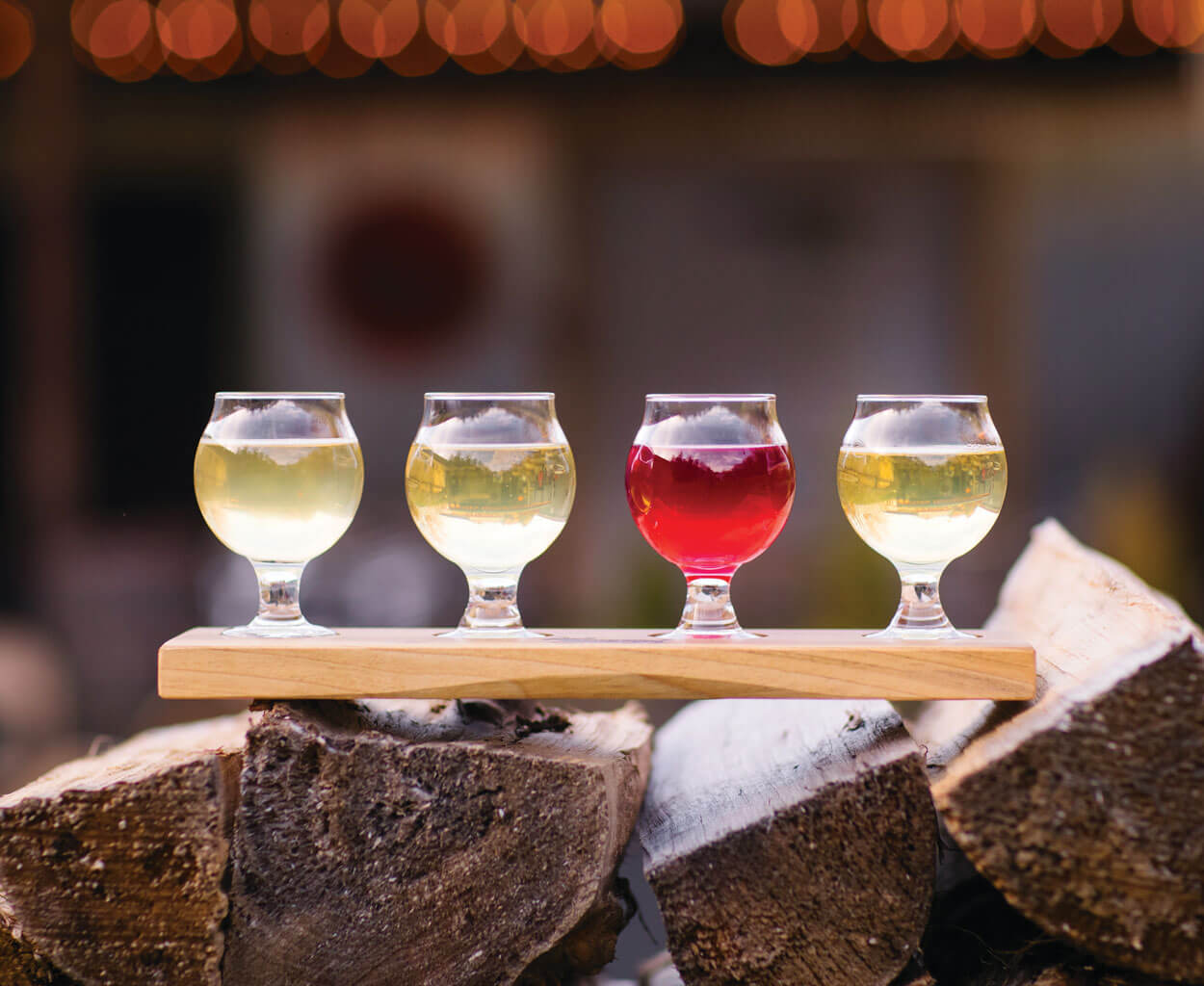 A flight of Molley Chomper hard cider includes a variety of sweet, warm, and rich flavors. photograph by Revival Creatives

Located inside a remodeled schoolhouse, the Molly Chomper cidery is a welcome addition to Lansing, a quiet town of just 158 residents tucked in the Blue Ridge Mountains. If it weren’t for Molley Chomper, locals like Everett and Jenny would go to the neighboring town of West Jefferson, about 15 minutes away. “In Lansing, there’s not a whole lot,” Everett says. “[Molley Chomper] is a nice, short getaway [for us], but there are people who come from all over.”

Downtown Lansing comprises one street, populated by a handful of shops, a post office, a town hall, a grocery store, and some restaurants. But the town wants to show outsiders that it’s worthy of attention, Kate says. And Molley Chomper is certainly helping.

Four miles down the road from the cidery, Bent Apple Farm is a place of growth. Robert and James, the Arscotts’ sons, have made the orchard behind their red farmhouse their outdoor escape, Kate says, pointing to a stray red wagon and toys strewn about the yard. Beyond the fence, 1,000 apple trees grow on 80 acres of hilly countryside. Chickens munch the weeds growing around one lot of trees, and Milo, the Arscotts’ German shepherd puppy, taunts the plump black-and-white cat that has made the farm its home. Kate laughs at Milo and glances out at the fields, smiling at her handiwork.

Eight years ago, Kate and Tim decided that they were tired of suburban life in Decatur, Georgia, so they went hunting for a new home that would meet all of their requirements: somewhere in North Carolina, near family and fly-fishing, that would give them the opportunity to build a business. When they discovered property with apple trees in Lansing, they settled in, planted more trees, and set their sights on cider. They named their business after the fictional apple-chomping goat they once dreamed of having — before realizing that goats would eat all of their apples.

At first, they focused on growing rare varieties of apples historically used for making cider in England and France. They took classes through Cornell and Washington State University extension programs to master the chemistry side of the process. Since then, they’ve gone from making cider in carboy jugs in the back bedroom of their house to producing 30,000 bottles of cider for more than 30 locations across the state, and now across the country. Kate feels as though she and Tim have “learned how to make yeast happy,” she says. “We can make something delicious with a mishmash of heirloom apples from the back hill.”

Molley Chomper cider is made with fruit from Bent Apple Farm and other local or regional organic growers who have the same passion and care for produce as the Arscotts. Today, about half of what the farm grows are local heirloom varieties, and no two apples are quite the same. Following nature’s lead, the Arscotts approach making hard cider with calculated but creative intention: They want every glass to taste as multifaceted as the fruit it came from.

Connie and Johnnie Rogers have made the drive to Molley Chomper from West Jefferson many times for Kate and Tim’s cider. Today, they gather around a table on the cidery’s patio to celebrate Connie’s dad’s 81st birthday. “I like the people,” Connie says. “Seeing how they make it and why they make it — it puts together all those things that say ‘North Carolina’ to me.”