Today, the Topsail Beach ocean was a “talking ocean,” Ritchie Watson says, meaning that the water was placid, not choppy, the waves were lazy and long, and the swells were gentle enough to float over for hours, so you could talk. Have a conversation, catch up. Because when you’re part of an annual family reunion of up to 60 folks who come from places as far away as California and London, England, or as nearby as Huntersville and Greensboro, you need time to talk about what everyone’s been up to for the past 12 months. You need a full week, actually. And at least six houses. And activities. And a schedule. And, heaven knows, a theme, like this year’s “Groovy,” which explains “Build Me Up, Buttercup” on the sound system tonight, and tie-dye T-shirts on the guests. According to the printed schedule that every family member receives, Monday is the “Dy-No-Mite! Beach Obstacle Challenge”; Tuesday features “Boogie Down During the Day … You Dig?” complete with tents, tables, and music for dancing on the beach; Wednesday is “One Gnarly Fashion Show”; and Thursday is “Totally Sick Beach Games,” for contests in cornhole, giant Jenga, sandcastle building, and bodysurfing. The beat — and the list — goes on. 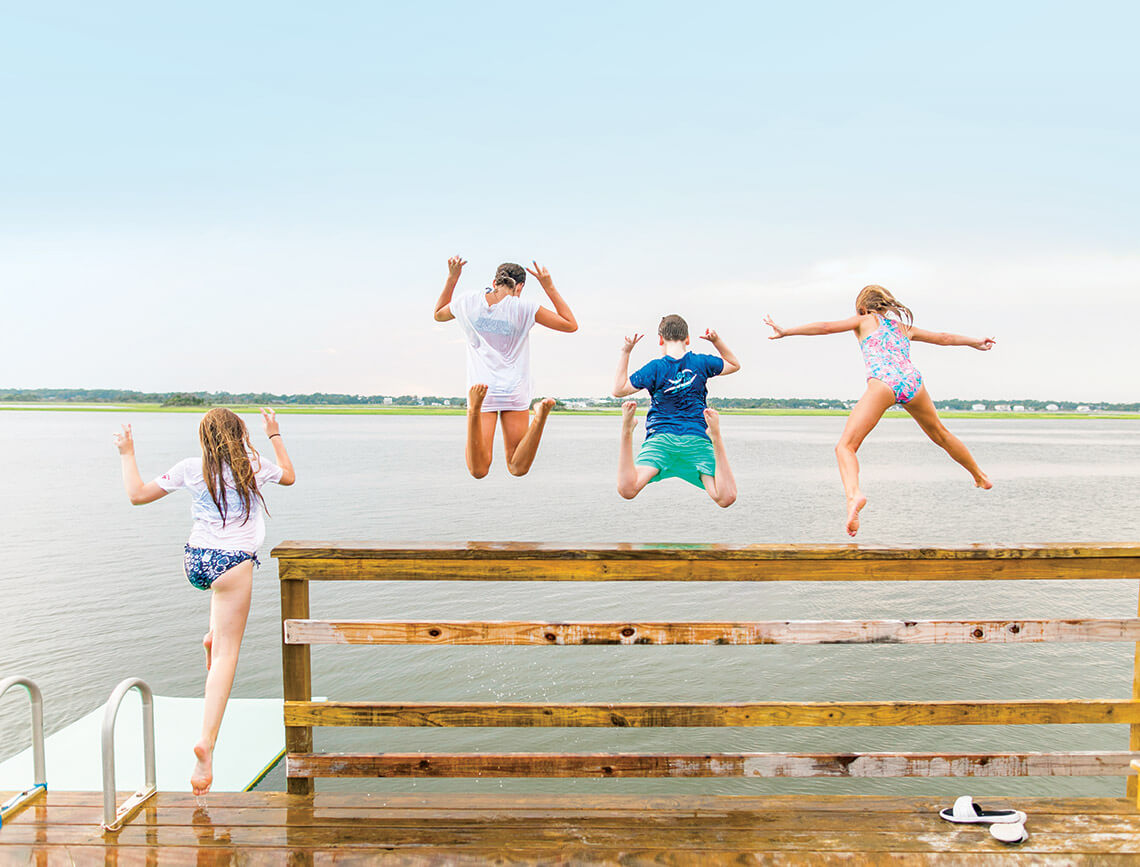 Summer Taylor, Ritchie’s niece, laughs. “It’s very organized but very casual. We spend days on the beach and evenings on the sound. And we all really and truly like each other.” Summer has driven 10 hours to be here, and to celebrate the 50th anniversary of her parents, John and DeeDee Watson.

While the Watson/Bland/Stern reunion traces its origins to the late 1960s, the family history on their Topsail Sound property goes back to 1907, when “nothing was here but fish and mosquitoes,” John says, and his great-grandfather was awarded the property in a legal debt. (Family lore has it won in a poker game.) For years, all that stood on the land was a rude shack with an iron tub in the yard for bathing, to which the young family cousins from Wallace would hitchhike and lazily spend a summer month. Marines from Camp Davis found the shack a convenient place to party, too. 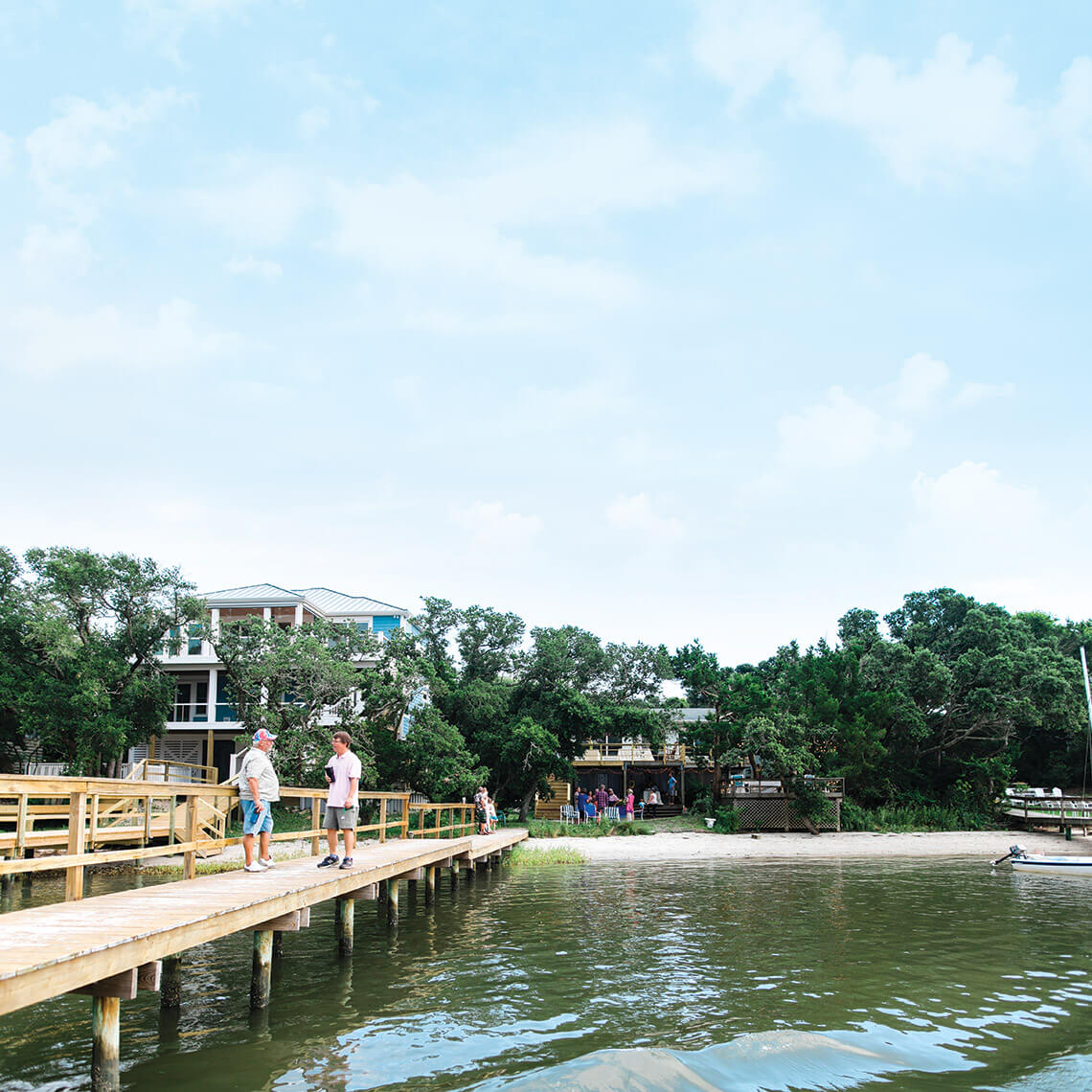 Between the planned activities that compose a Watson/Bland/Stern reunion, family members find quiet moments to catch up and enjoy views of Topsail Sound. photograph by Matt Ray Photography

The first family home was built in 1976, and three more followed for the growing generations. Today, the sandy cul-de-sac is labeled with its own official state sign proclaiming “Bland’s Landing,” and remnants of the maritime forest it once was still shade the houses and the stretch of sound-side beach. Around one trunk is a platform known as the Party Deck; from there, news of family weddings and births and accomplishments are announced.

Elton John’s “Honky Cat” thumps out now, as early evening skiers and boaters pass in front of the pier, where youngsters line the railing or jump onto a floating mat beneath an American flag. In a nest atop a channel pole mere yards away, a pair of ospreys feed their fledglings, oblivious to the goings-on. “They’re here every year,” Sue Watson says. Twin toddlers, the youngest members of the clan — one named Johnathon Boone in honor of the town where his parents met and married — wander about, gnawing on watermelon slices. Summer’s husband, Scott Taylor, guides a buzzing drone overhead. String lights begin to twinkle in the trees.

Next to family, food is all-important for a weeklong gathering, and its own kind of annual tradition. “One night, we have a chicken cook-off, and another night is lasagna,” Summer says. The final night is always devoted to a fish fry send-off on the Party Deck, and while most suppers are late (to appreciate the spectacular sunsets), “if you don’t get here by 5,” a cousin warns, “the fish is gone!” And someone always makes the two-hour roundtrip trek to Britt’s Donut Shop in Carolina Beach. “Eleven seconds in the microwave,” Ritchie says, means that several dozen of the famous glazed goodies are hot and delicious all week long.

Tonight, on porches, 16 tables of varying sizes are decorated with vases of lilies, seagrass, black-eyed Susans, and other flowers from Castle Hayne Farms — a special touch to celebrate John and DeeDee. Propped between mini shrimp cocktails in shot glasses and baggies of boiled peanuts, a menu lists the dinner to come, all made by the family and their friends with the anniversary in mind: barbecue “sundaes,” or barbecue, slaw, and cornbread layered in tall glasses; mac ’n’ cheese; deviled eggs; spinach salad; and Parmesan corn cut from the cob.

Conversations are lazy and laughing, filled with tales of bygone reunions. Each year’s main event is the Fourth of July parade. “We march down our driveway to my cousin’s house nearest the street, stand on his front porch overlooking Anderson Boulevard, and sing patriotic songs and wave flags,” Summer says. The memories that get the most chuckles, however, center on the annual talent show, which in past years has featured juggling, drum solos, skits, and songs from Oliver! and The Sound of Music. And then there was the year Jane Bland Watson, the matriarch, dressed up as Dolly Parton to reenact a scene from the movie 9 to 5, complete with balloons in the appropriate places.

You name it, the family has done it in these summer-after-summer gatherings. Mini golf tournaments and roller-skating nights at Topsail landmarks; a flotilla on the sound; a ladies’ night crashed by the “Chubb-n-Dales.” Forget awards and prizes; this special week is all about camaraderie and contentment, not competition. Fun, not fame.

Legend has it that Topsail got its name from the history of Blackbeard the pirate, who hid out in the sound with his topsails visible from the sea, waiting for merchant ships to pass by so he could plunder them. Naturally, then, one year’s theme was “Pirates,” featuring a “Talk Like a Pirate Day.” The summer Meghan Markle and Prince Harry wed, what other theme could possibly be chosen except for “A Royal Fourth of July”? At the “Dress Like a Royal” costume cocktail party, tiaras abounded, and someone dressed as Elvis — a legitimate, if different, kind of king. 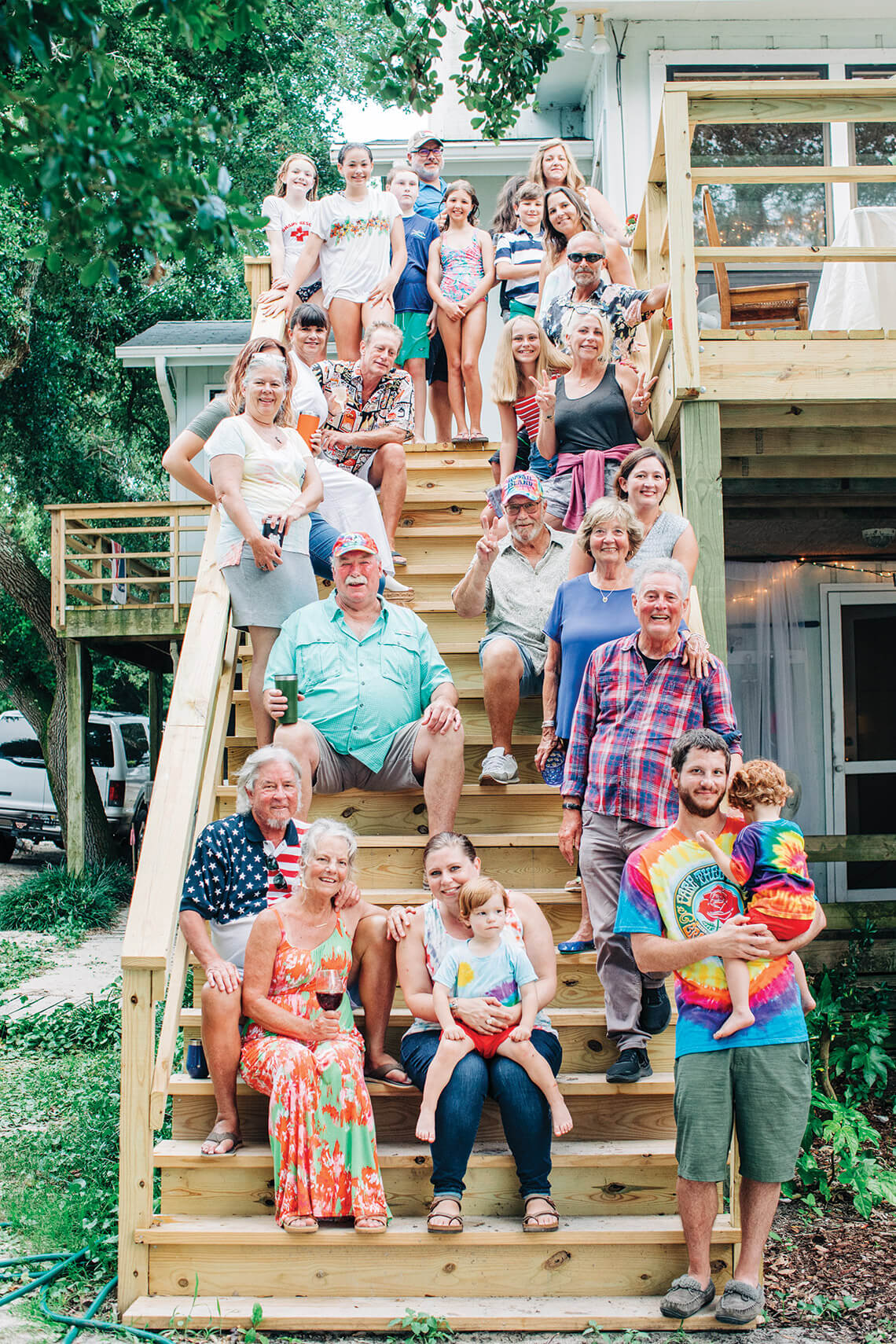 Quickly, though, before the light fades, someone calls for the annual “step picture,” taken on a flight of wide wooden stairs. The youngest members scamper to the uppermost risers, and the oldest take their seats at the bottom in a formation of smiling faces found in years and years of photograph albums and on the reunion’s Facebook page. “All right, suck it in!” someone yells, laughing. Click.

Any writer will tell you that place means so much in any story, becoming a character in its own right. For this family, Topsail Beach and Bland’s Landing is their place, and has been for more than 100 years. But it is people who populate a story, and for more than 50 years, on the same week of every year, the Stern and Watson and Bland people have deliberately reunited to play, talk, and eat; to laugh, tease, and perform; to swim, sing, and tell stories. Every moment makes a memory. 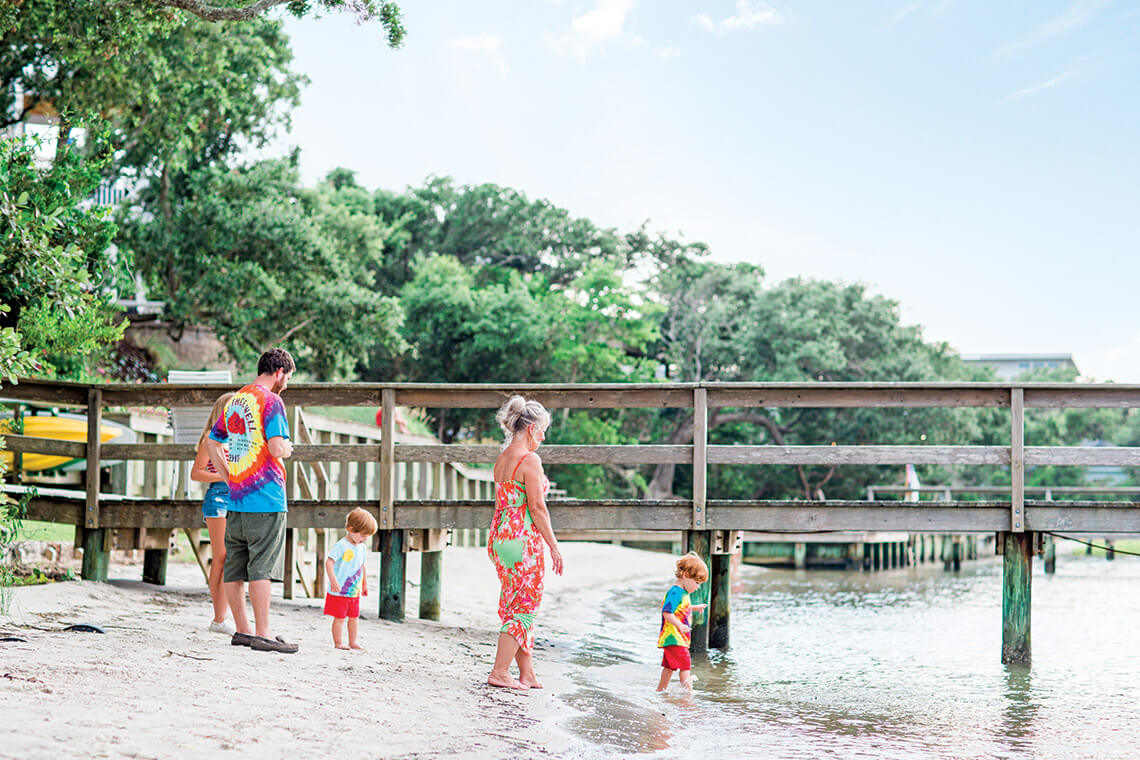 Sheers strung about the porch waft in the evening breeze as guests make their way to the laden serving table. On the sound system, Frank Sinatra wants someone to fly him to the moon just as, incidentally, the moon itself is rising, as it always does. As surely as the Fourth of July rolls around again and the ospreys return to raise another brood, the Stern and Watson and Bland families will return to Bland’s Landing for another week of summertime. They’ll hope for cloudless days and a talking ocean and happy news from the Party Deck. But none of that will really matter. Because they’ll have each other.