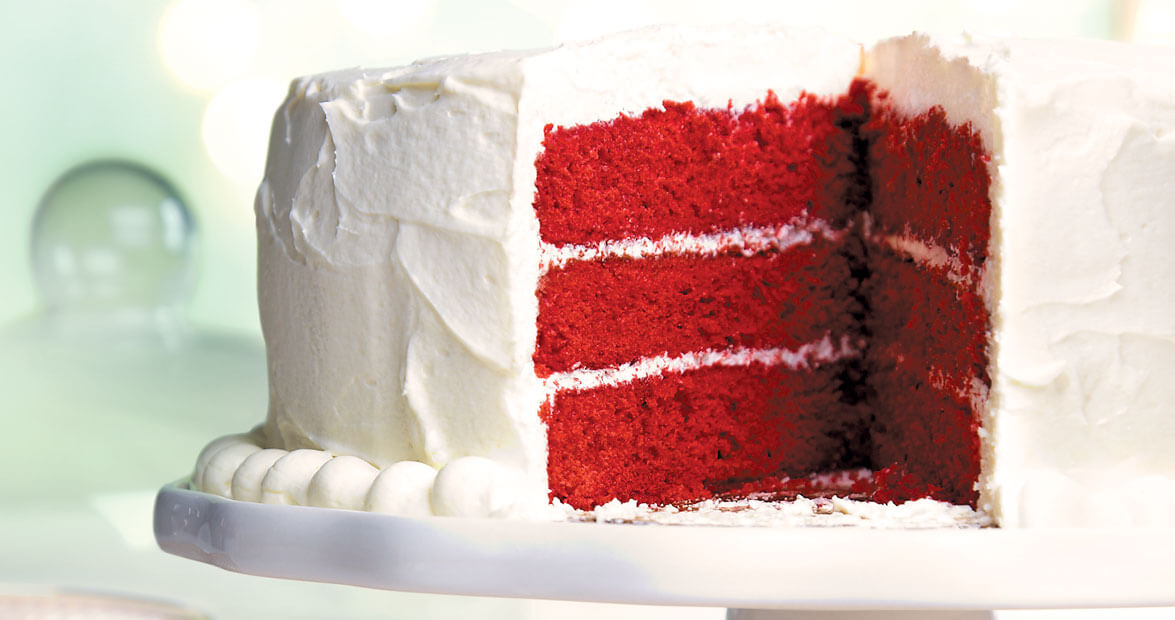 Shhh. Don’t tell a soul, but red velvet didn’t originate in the South. Never you mind. We quickly adopted the cake with such devotion that it feels like our own. Classic red velvet never shines brighter than at Christmas, when its brilliant red layers and fluffy white icing serve as a centerpiece, especially when perched on an heirloom cake plate with a domed glass lid, like an edible snow globe. This recipe includes traditional ermine icing — an unusual concoction that begins with a cooked flour mixture instead of the cream cheese that’s popular these days. Some hand-me-down recipe cards call this frosting “gravy icing” because cooks stirred it up in their trusty skillets.

For the cake: Preheat oven to 350°. Grease three 9-inch cake pans. Line the bottoms with parchment paper and grease the paper. Dust the pans with flour, tap out the excess, and set aside.

Sift together the flour and salt into a medium bowl. In a large bowl, beat the butter until soft and creamy with a mixer set to high speed, about 2 minutes. Add the sugar and beat on high speed until light and fluffy, about 5 minutes. Add the eggs one at a time, beating well after each addition. Add the flour mixture in thirds, alternating with the buttermilk, beating on medium speed only until the batter is smooth after each addition. Scrape down the sides of the bowl between additions.

Divide the cake batter evenly among the prepared cake pans. Bake only until firm on top and pulling away from the sides of the pan, 16 to 18 minutes. A tester inserted into the center will come out clean. Let cool in the pans on a wire rack for 5 minutes. Turn the layers out on the rack and turn right side up to cool to room temperature.

For the frosting: In a small saucepan, whisk together the milk and flour until smooth. Whisking constantly, cook over medium heat until it reaches the consistency of pudding. Remove from heat, add the sugar and salt, and whisk until the sugar dissolves. Scrape into a small bowl, press a piece of plastic wrap or waxed paper directly on the surface to prevent a skin from forming, and let stand until it cools to room temperature. (If your kitchen is warm, place the bowl in the refrigerator for about 30 minutes.)

In a large metal bowl, beat the butter with a mixer set to medium speed until light and creamy, about 2 minutes. With the mixer running, add the flour mixture in heaping spoonfuls. Beat in the vanilla. Scrape the bowl with a rubber spatula. Switch to the whisk attachment if your mixer has one. Beat the frosting on medium-high speed until it is light and fluffy with the consistency of stiffly whipped cream. Use immediately.