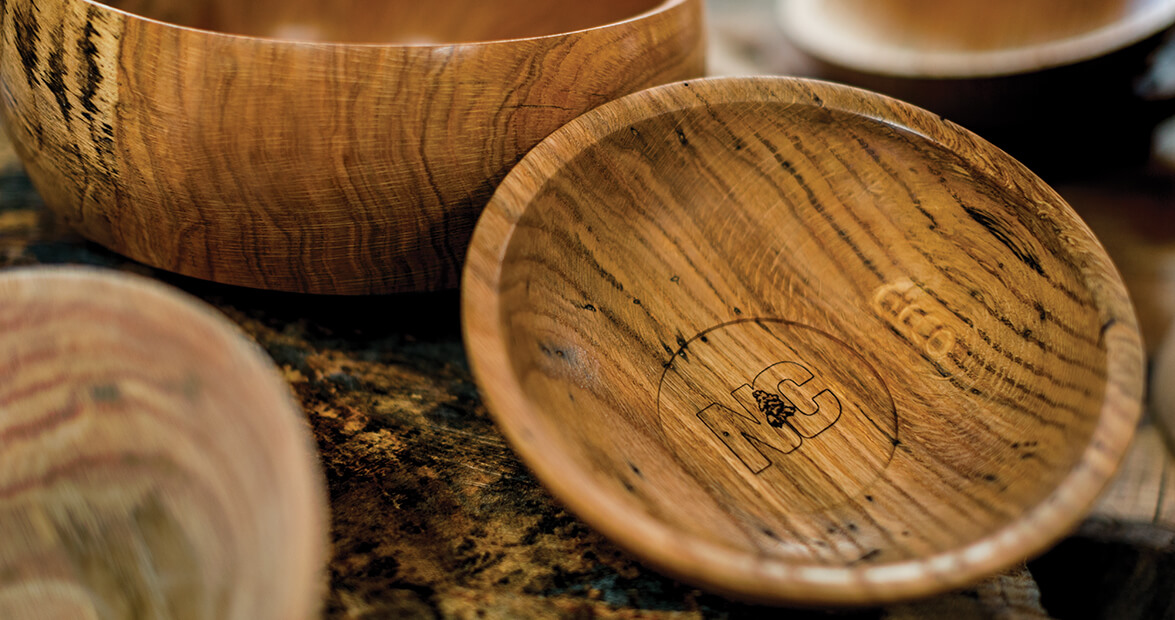 Woodworkers do not like the water oak. It splits. It warps. It’s hard to cut. Its best use, usually, is a lowly one in the woodworking world: plywood for fruit and vegetable containers. It’s only used as timber, one reference guide says, “as a last resort.”

And yet, in the very back of Stuart Kent’s woodworking shop are eight thick slices from the trunk of a majestic water oak, each one with dozens of rings and weighing hundreds of pounds. Last year, he got a call from the North Carolina Department of Commerce. They asked him if he’d take the pieces left from some water oaks planted on the State Capitol grounds when Franklin Delano Roosevelt was president and make more than 200 wooden bowls to give to companies and executives that chose to relocate to North Carolina. Kent said sure, he could do it; so he piled the four-foot-wide logs into his blue pickup truck and trailer, which strained under the weight, and headed from Raleigh back east to Winterville. 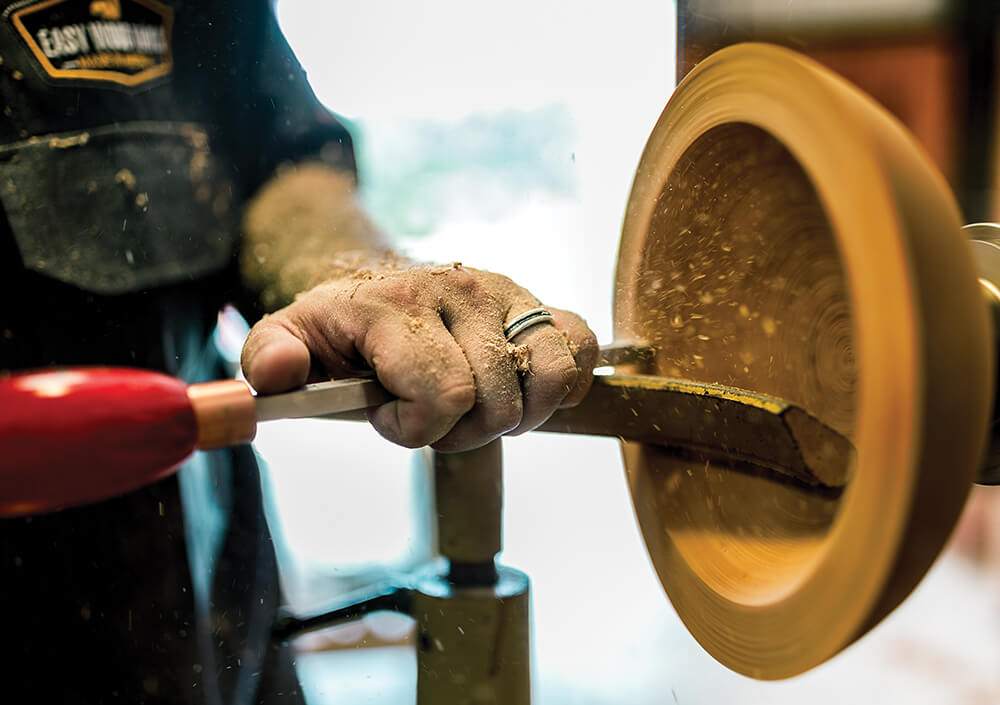 Woodworker Stuart Kent uses a lathe to carefully carve out the center of a water oak bowl. photograph by Charles Harris

In his shop, Kent started cutting the trunk into cubes, then round billets. Then he began turning the billets on a lathe, slowly and methodically. Kent figured he’d make a mistake here and there. But much of this wood was unusable. It had gaps in it, or it twisted, or it was too thin in the wrong spot. But the rest, slowly but surely, became beautiful, smoothly finished bowls, each branded inside with the state logo.

You won’t find Kent’s work in furniture showrooms, but plenty of people come to him to get something they need. Inside his shop is a trapezoidal table that will soon fit perfectly into a small conference room. Last week, he delivered a custom 8-by-4 wine cellar door to a vineyard.

Kent was a woodworker long before he bought a closed-down cabinetmaking facility along an industrial strip of road in Winterville. Here, he brought what he’d learned from years of woodworking as a grad student in fine arts, then as a Fulbright Scholar who spent 2012 and 2013 in Costa Rica. Now he’s back. Here. In a spot not traditionally known for woodworking.

Kent wants to change that.

Kent has found what a lot of entrepreneurs around Greenville are finding: opportunity.

There’s this idea that, in some ways, modern North Carolina stops once you get east of Raleigh, that out there among the fields of tobacco, corn, and soybeans is a place where making a living is hard, and there’s little time to do anything else. But people in eastern North Carolina are clamoring for products and services you’d take for granted in Charlotte, Raleigh, Winston-Salem, or Asheville. Take the T-shirt printer who uncovered a vast, untapped market for people who wanted more East Carolina University gear than they were getting. Or the dairy farmer who opened an ice creamery in nearby Greene County, where lines form out the door. And this, too, is what Stuart Kent has discovered. People want to learn how to work with wood, and they come to him, sometimes from great distances. They want to learn, and Kent wants to teach. He’s starting the North Carolina Furniture School, and he’s thinking big. “I want it to be eastern North Carolina’s Penland,” he says, referring to the world-renowned craft school in the North Carolina mountains. 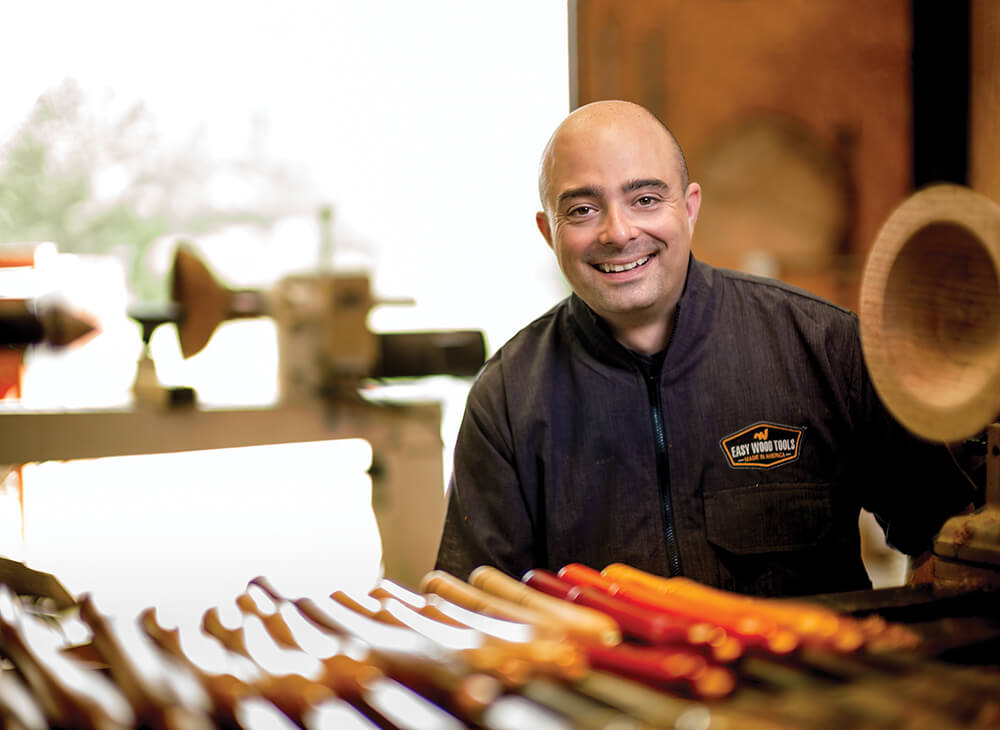 Kent opened the North Carolina Furniture School in Winterville to teach a new generation of woodworkers how to use the tools of the trade. photograph by Charles Harris

That area has long been associated with furniture makers, and indeed, most of the state’s professional woodworkers still live and ply their trade in the hills around Hickory and Morganton. Down East, fewer people are making furniture for a living, which inevitably means there are fewer places to learn how to do it, which means Kent has found what a lot of entrepreneurs around Greenville are finding: opportunity.

Kent’s shop itself doesn’t look all that special. Even at 15,000 square feet, it feels full, but not cluttered. There are table saws, band saws, planers, and joiners. Lumber lines the walls. There’s a forklift. An anvil. It’s a big building for such a small business, and thankfully so. When Kent went out on his own in 2008, he was working behind his home in a building just a tenth of the size of this one.

Kent is 40 now, with a young face. He wears a long-sleeved smock to keep his undershirt from filling up with itchy sawdust. His voice is tinged with optimism. Up front, his only other employee, Cedric — “my right hand” — is wearing a respirator and sanding. He’ll be at it for hours. In the back, Kent holds classes two days a week. He wants to up that number to five. He’s just bought a trailer, with plans to fix it up, load it with eight lathes, and take his classes on the road, to senior centers, schools, and Boy Scout troops. 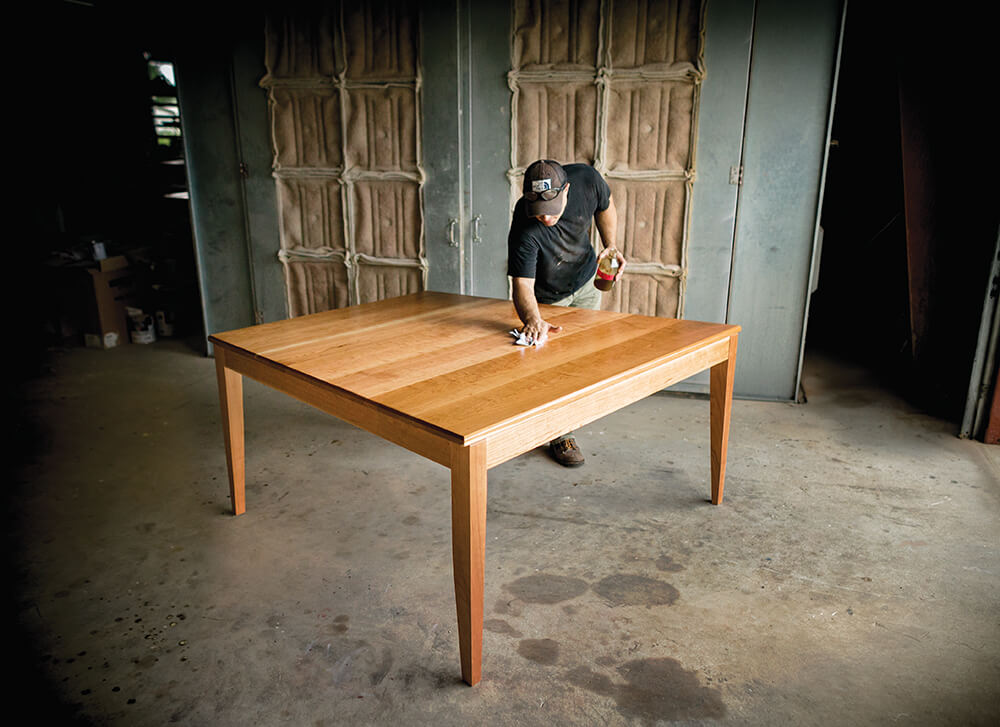 Over the last two or three years, students have begun asking for more fundamental woodworking skills, Kent says. As woodshops have moved out of high schools and into vocational schools, basic skills have been lost. At the same time, the rise of do-it-yourself has people turning to YouTube and Internet guides for how-tos. But when they realize they can’t figure out how to use woodworking tools online, they turn to Kent. In their first Introduction to Wood Turning class, Kent’s students use a lathe to create a bowl. At the end of their first day, they’ve made something.

And that, simply, is what drives Kent. He has the ability and the machinery to crank out furniture that could end up in catalogs and stores. But he doesn’t want to make the same item over and over, to be constrained by the philosophy that what might be sellable might not be good. “There’s no pleasure in that,” he says, then looks down at the hard-to-make water oak bowl in his hands. “There’s pleasure in this.”