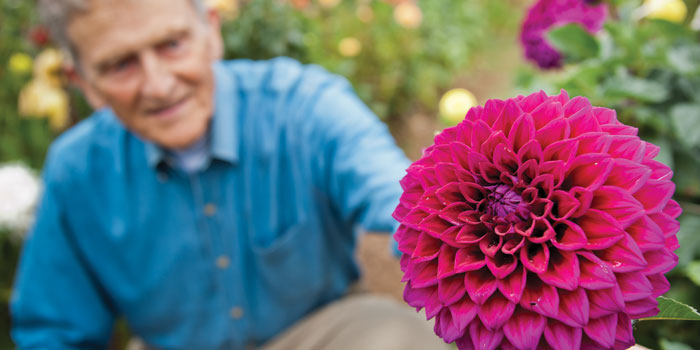 Alan Hetzel sprouts like a stick, and even though he’s 79 years old, he still looks a little like a growing boy, tall and skinny with a round and bright face that bobbles a bit, in his button-up shirt and corduroy pants. He and his wife, Hazel, live in a one-story home in a quiet retirement community in Black Mountain. Sometimes in the middle of the night, he wakes up, tiptoes to the door, and opens it quietly so his wife won’t catch him, and he sneaks out. He takes a flashlight and walks up a hill, alone and secretly, into a bed of dahlias, each one standing nearly chest-high, just to check on them.

In every other way, he seems like a normal, older gentleman. His mind is sharp, and his perspective is grand, and he regularly participates in town debates on such matters as the need for park benches. Before this life, he was an Air Force pilot and a farmer and a head of banking, although you get the sense from talking to him that he doesn’t believe he was all that great at anything else, except for growing these dahlias.

He dreams of them in the winter, the way a boy might dream of catching fly balls for the Yankees. He prepares for them in the spring, the way a farmer might prepare for growing season. He cares for them in the summer, the way a jeweler might care for diamonds. Then, just before fall, for some reason, Hetzel puts up a sign in the bed of flowers he loves dearly and protects fiercely, and that sign tells anybody who comes by, “Residents, please pick the dahlias.” He hangs scissors on the sign.

People call him the Dahlia King. The flowers start in his shed as tubers that resemble sweet potato roots, brown and lumpy in the shape of rabbit ears. He stores the tubers in bags filled with woodchips. He has nearly 800 tubers. Each winter, he decides which varieties he’ll grow using a map and spreadsheet, and in the spring, he takes a quarter of the tubers — 200 — and puts them in the ground neatly on a hillside that faces east for optimal sunlight, each one three feet apart for optimal growing room.

They begin to sprout in mid-May. And that’s when Hetzel begins the sneaking around. Many people use the word “obsession” loosely, defining one interest or another as such. But few people ever narrow their whole focus down to one. Hetzel, in the gardening sense, is obsessed with dahlias. He doesn’t grow anything else, not a rose, not a hydrangea, not anything but dahlias. “I do tend to forget that there are other flowers,” he says.

In order to grow, dahlias require extraordinary attention and exceptional conditions. They crave at least eight hours of sunlight a day and dry soil. Among their worst enemies are clouds and slugs, which stunt their growth or kill them slowly. In this way, they seem a little human, craving lives with sunlight and no pests.

“I look at those big, ugly, brown roots, and I just see stored-up sunshine,” Hetzel says. “I feel a part of things.”

They grow up to around six feet, tall and skinny with round, bright faces that bobble a bit. And when they bloom, they don’t make for fields of gold or blankets of red. Instead, they are magnificent as individuals, every single one.

“You’re such a blessing, sharing your flowers,” one letter reads.

“Thank you for your speaking flowers,” says another.

“Nothing brings me closer to God than gazing at one of your magnificent dahlias.”

Hetzel has dozens of letters like this. About 350 people live in Highland Farms retirement community, a cluster of small homes for folks who’ve downsized. Some of them are retired professors. Others are retired ministers. One is a retired diplomat who once lived in India. And they’re all invited to pick the Dahlia King’s flowers.

Hetzel and his wife moved here from Highlands six years ago, specifically because of the diversity of individuals. They immediately joined a book club.

“These people have traveled all over the world, and they bring that knowledge back,” Hetzel says of the club. “We speak our mind, and we try to listen, too.”

Hetzel was born in Charleston, South Carolina, and when he was 12, his father moved the family to Florida. But every year, Hetzel spent the summer in Highlands at his family’s old home place. His dad grew dahlias there each year.

Hazel, his wife, grew up in Charlotte. Her father was a lawyer who revised the penal code on the welfare of the state’s prisoners. He nearly announced his candidacy for governor in the 1930s, but he contracted meningitis and died when Hazel was just a child. Her grandfather had a place in Montreat, and Hazel spent her summers there.

Alan and Hazel didn’t meet until after they had each been married and divorced, with children. They married in 1972, merging two families — Hazel had four children; Alan had two.

By then, Alan had already served in the United States Air Force for four years, and another 10 in the Florida Air National Guard. He also had a successful business career. He was the CEO of a group of banks in Gainesville, Florida.

They bought a farm in Florida and tried to live a sustainable life. Alan’s dad was a farmer, and Alan figured he could do it, too. They raised chickens and goats and rabbits, but the whole thing was more comical than successful. Alan fed the animals in the morning, then put on his suit and led his bank. One day, Hazel called Alan at the office to tell him one of the goats was giving birth. “You have to get home,” she said frantically. Alan left the bank and delivered a goat.

They did fine with accumulating animals. Alan even bought several exotic chickens from Japan. But there was one problem: They couldn’t bring themselves to kill any of the animals for food.

“We just had more and more chickens,” Alan says. “They were all just pets.”

They gave up the farm and later retired to the North Carolina mountains.

The dahlia is the Mexican national flower and a native of Central America, but people all over the world developed hybrid varieties.

It’s a flower with a following. The Carolinas Dahlia Society covers North Carolina and South Carolina. Alan Hetzel is a member. “It has about 30 to 40 members, and they’re all nuts,” he says, laughing. The organization holds an annual dahlia show in September.

When he moved to Highlands to retire in 1990, Hetzel was a competitive dahlia grower. He went around the region, showing off his flowers, hoping to win. One hybrid he created won enough shows to earn its own name as a new variety of dahlia. It was pink and bold. He named it ‘Sadie,’ after his grandmother. It’s on the registry with the American Dahlia Society.

But when he moved to Black Mountain six years ago, Hetzel gave up competitive dahlia growing, and he began to grow dahlias for different reasons.

He grew them for these new people in his new retirement community, individuals from all over the world who welcomed him and his wife for who they are, individuals who pick his flowers for a quick burst of happiness.

“There’s satisfaction in that, too,” he says. “Making something as beautiful as it can be and then letting it go.”

Last July, at the time of year when dahlias are just about to bloom, the time of year when they need the most attention, Hetzel couldn’t be there for them. He had heart surgery. He asked a friend to keep watch on the dahlias for a few days. His surgery was July 13. He went to the garden that morning to check on his flowers. And then he went into the hospital and had the arch of his aorta replaced with a synthetic one. He spent 10 days in the hospital and another two weeks in the nursing home. But doctors told him that he was good as new and that he had many good years ahead of him. Hetzel responded: “Many more years of growing dahlias.”

Hazel, for her part, can’t help much these days. She had skin cancer a few years ago, and she’s not allowed in the sun. She’s been married to Alan for 40 years, and she smiles when she says she’s a dahlia widow. She loved being outside, before the cancer, she says.

And maybe that’s why she’s OK with her husband spending so much time sneaking around, day and night, in a field of flowers, spreading clippings of sunshine.

Michael Graff is the senior editor of Our State magazine. His most recent story was “Carolina Cakes” (February 2012).