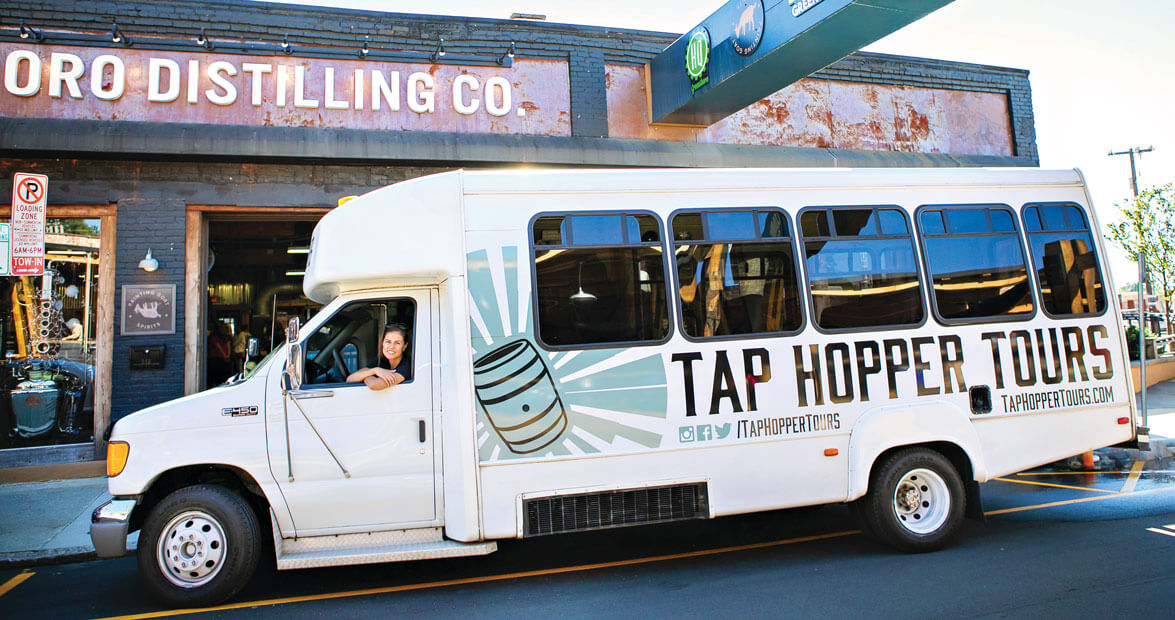 Here we are inside World of Beer, a bar that offers more than a hundred different beers in nearly every style from each continent except Antarctica, and what does Kyle Vessa order? He comes back from the bar with a pale yellow pint glass of Bud Light. When he tells Niels Larsen about his choice, Niels pauses for half a beat before responding. “Easy!” he says reassuringly. “You can pound that.”

Kyle and his sister, Paxton Williams, are about to embark on their first go-round with Tap Hopper Tours, a bus trip that will take them to a pair of breweries and a bottle shop during a three-and-a-half-hour journey around Greensboro. But before we talk about that, let’s just pause to appreciate Niels’s response to Kyle’s choice of Bud Light, which could have gone all sorts of wrong (for example: “Bud Light?!”). But Niels has 17 years in the hospitality industry under his belt. He’s a bartender at Print Works Bistro. He’s been schooled in Quaintance-Weaver Hotels’ “see it from the guest’s perspective” mantra of service, which boils down to, in his words, “I get tipped because I make somebody happy.” He is in the business of creating an individual bubble of joy around whoever his customer is. And so, if that customer orders a Bud Light, Niels can instantly respond with a few words that really say: Ah yes, a beer that you can drink quickly! A benchmark for the experience to come!

Laypeople like us cannot do that. Not that quickly. The response? It’s perfect, really.

Tap Hopper Tours started in 2016, after Joymongers Brewing Company and Fainting Goat Distillery opened. They were, respectively, Greensboro’s sixth brewery and first distillery, which meant that Niels and his business partner, Patrick Sanecki, finally had enough options to run different iterations of the tour around Greensboro each weekend. 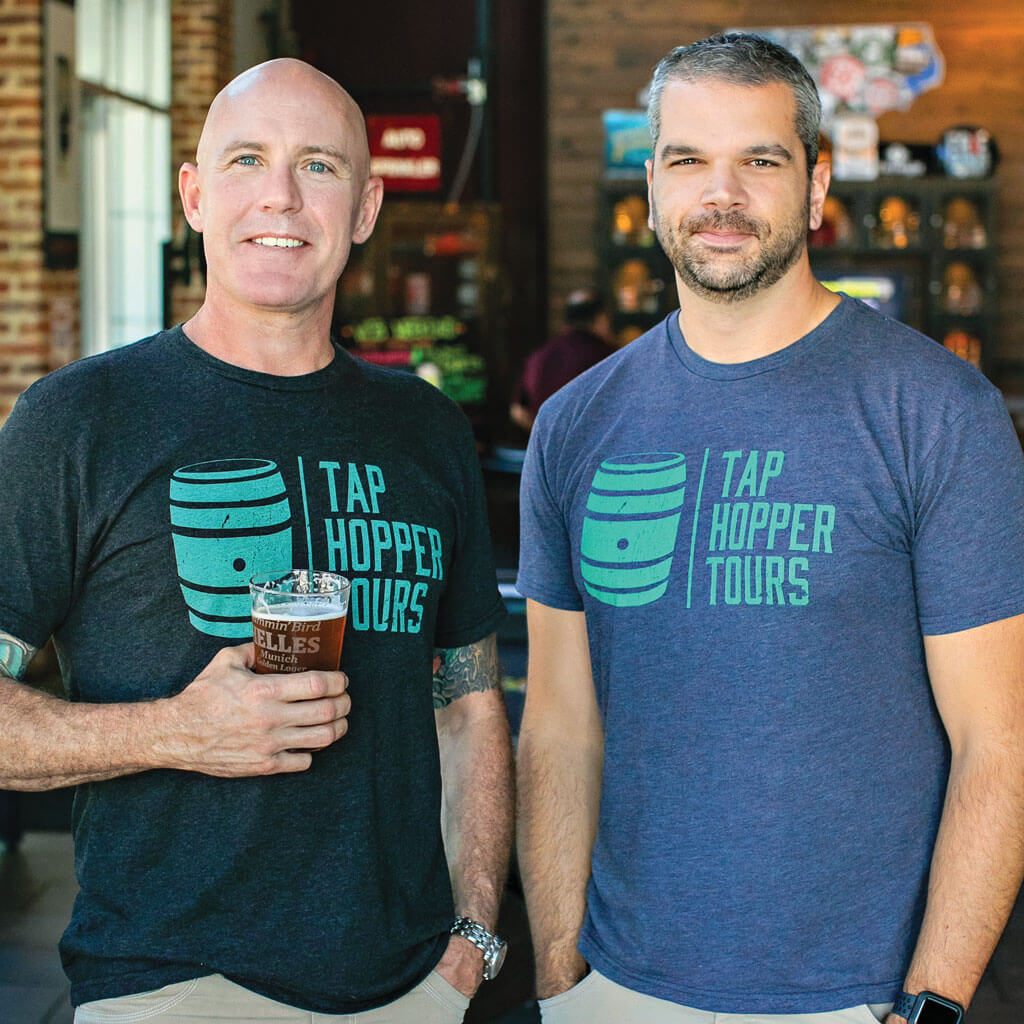 Today, there are 11 nearby breweries in Tap Hopper’s rotation. Each public tour begins at World of Beer at 1 p.m. sharp on Saturdays. Over the course of the afternoon, it stops at two breweries and a non-brewery, like a distillery or bottle shop. It’s not a party bus. Instead, it’s intimate. Tap Hopper’s converted airport shuttle bus holds only 14 people, max. The premise is simple: You sign up, then show up. Then you drink beer. You taste samples of pale ales, ambers, stouts, and more as you get a behind-the-scenes look at the brewing process. After that, you walk back to the taproom and pick a “taster’s choice” of whatever beer you want. Then you move on. 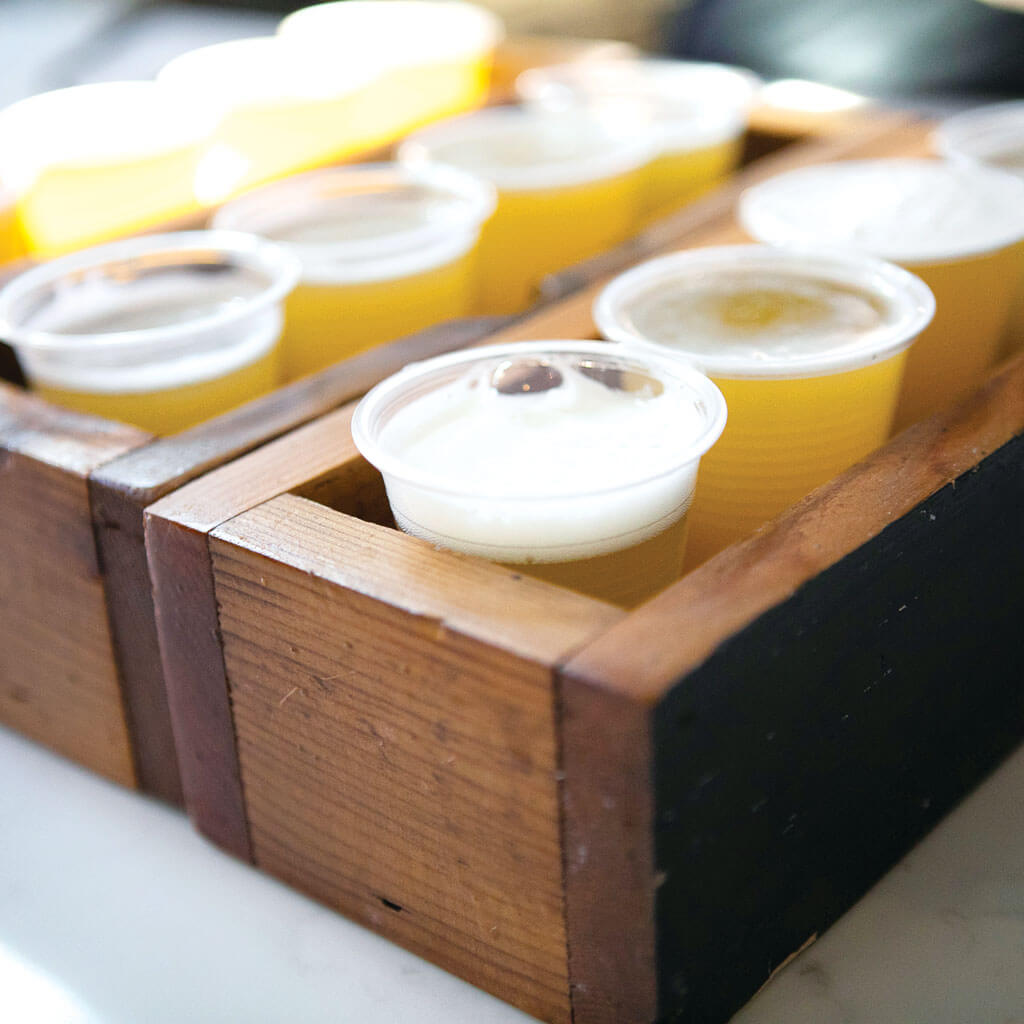 Every stop includes a sample-size beer. photograph by Sara Brennan

Tap Hopper is part of a larger movement of beer-adjacent businesses: moons that orbit the breweries themselves. Niels and Patrick are not the first people to hit on this idea — brewery tours have popped up in Asheville, Charlotte, and Raleigh. But they may be the first in the state whose experience in talking with brewers uncovered a problem — and a solution. The pair quickly discovered that many brewers want to can their beer but can’t afford the time or expense. So now, Niels and Patrick operate a mobile canning service, too. For a flat fee, they’ll pull up with all of the machinery in a 16-foot-long trailer. They can the beer. And then they leave. Fifteen brewers now use their service. “Without the tour company, the canning company wouldn’t exist,” Niels says.

The canning now helps prop up the tour business, which, over time, has become more perfectly calibrated. “It’s not a Ph.D. in Craft Brewing,” Niels says. “It’s a fun afternoon in Greensboro.” At Gibb’s Hundred, Ryan Hovis, the assistant brewer, leads a group of seven through a cavernous brewery that used to be a private indoor tennis court. After sharing an anecdote about removing AstroTurf from concrete (“It’s hard,” Ryan says), he tells the story of the creation of “Hypothesis of Failure,” a beer that came into being when they had a hiccup in the brewing process of one of their signature beers. To save it, ingredients were added posthaste. The beer was a hit. Some 45 minutes later, at Preyer Brewing, head brewer Calder Preyer explains their new Brut IPA, and why dry IPAs are now a thing. Then he cracks open a mash tun where a batch of sour beer is being made, and everybody peeks inside at the opaque white liquid with a heavy smell. Later, at beerthirty, a bottle shop, a married couple tries a few samples, then takes advantage of the dollar-off beers for sale.

Niels and Patrick are there, handing out samples, pointing out bits of trivia, and answering questions. But they largely fade into the background at breweries. That’s by design. They observe, letting the brewers, their processes, and their taprooms be the stars. In fact, if there’s anything that Niels has learned, it’s that each of the brewers and their businesses need to have a personality. Charisma. A voice. “Sometimes, they think the beer is the only thing,” Niels says. “The beer’s not the only thing.” 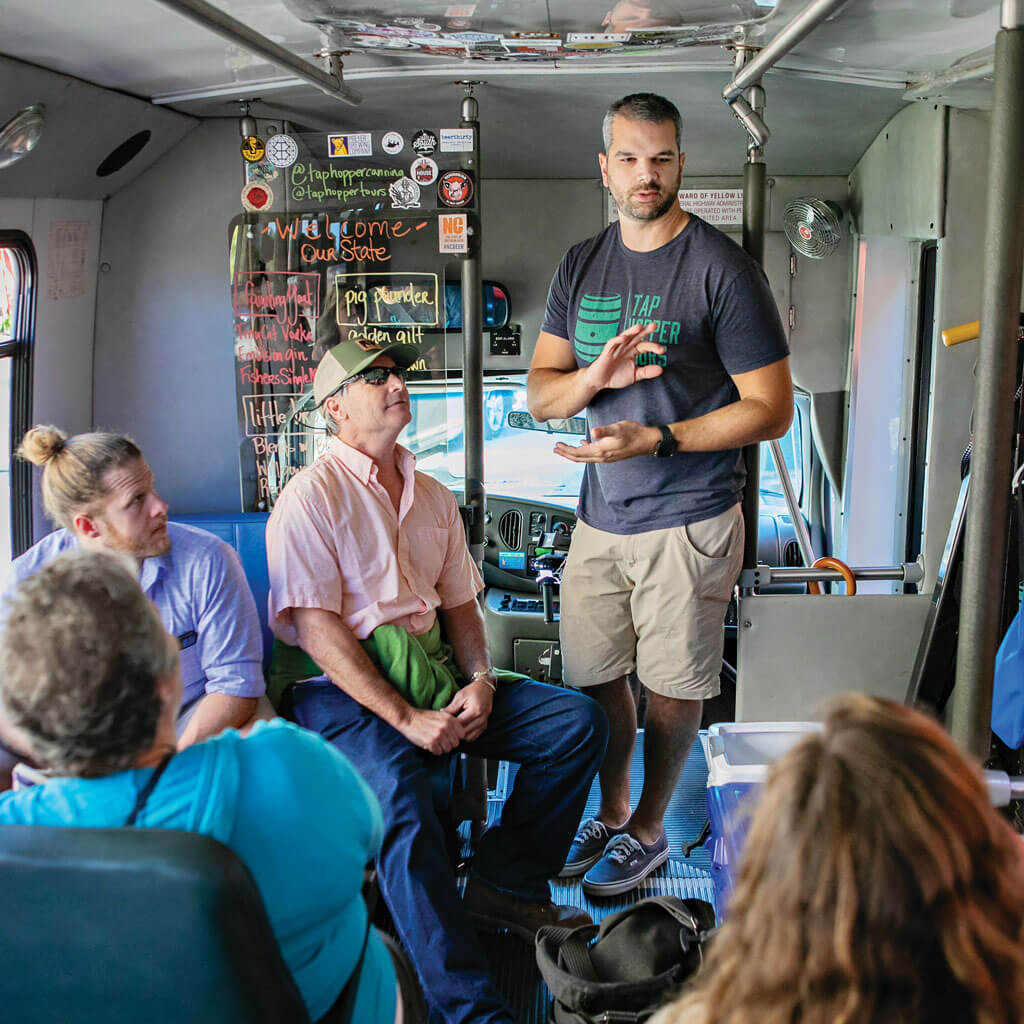 On the short ride between breweries, Patrick answers questions about craft beer. photograph by Sara Brennan

The tour ends back at World of Beer. Kyle goes back up to the bar, newly versed in the world and possibilities of craft brewing. “Outside of the box,” he says of his new approach to beer. After an afternoon of tasting winter ales, milk stouts, and IPAs, Kyle now has the diversity and full selection of World of Beer at his disposal. He orders a draft, takes a sip, and wrinkles his nose. “Tastes like soap,” he says. Nothing wrong with the glass, he says. It’s the beer itself that tastes different than it used to.

“What is it?” Paxton asks him.