Looking back, a few things are now clear to me. First, it’s really quite a tall order to keep a water snake happy and fed with crayfish and minnows when it’s living in an aquarium on your dresser. Much harder than keeping praying mantises stuffed full of grasshoppers. You can knock out that chore in half an hour after school, easy. Second, lizards will eat bologna. (Although now I know that they shouldn’t.) And third, king snakes go into a period of quasi-hibernation if you place them in an old pillowcase, knot the opening twice, and stick them in the family refrigerator’s vegetable crisper for a few weeks during deep winter.

All of which leads me directly to item No. 4: My mother was a saint.

I was, in some respects, I suppose, an unusual child. In my growing-up bedroom, at various times, in aquariums and terrariums and cardboard boxes and Mt. Olive pickle jars, I kept alive, for days or weeks or months, an incredible bestiary. I remember king snakes, black snakes, rough green snakes, garter snakes, banded water snakes, worm snakes, and ring-necked snakes. I kept every turtle I could find, for a night or a month. Spring and summer saw a rotating cast of amphibians in various states of metamorphosis: Bullfrog tadpoles with limbs growing and stubby tails disappearing by the day. Tiny American toad tadpoles that grew from gelatinous strings of black eggs. A single Carolina anole, the only one I ever saw in the wild as a child. I let them all go, unscathed as far as I could tell, save for the bucket of bullfrog tadpoles that I left out in the sun too long. That was a hard lesson for a little boy, underscored with grief and shame.

And my interest was not only in the living. In seventh grade at Northeast Junior High School in High Point, I was placed in Mrs. Martha Lomax’s homeroom class; a more fortuitous environment I couldn’t imagine. Mrs. Lomax was a science teacher, and she kept a couple of tall display cabinets in the back of the room that were chockablock with specimen jars.

“Keep it in your room,” she would admonish. “It’s not going to get out, is it?” Almost never.

I was transfixed by the bestiary. And inspired. I began to add specimen jars to my bedroom museum. Whatever I found dead — by the road, in the creek, on a trail — soon floated in mayonnaise and pickle jars like bejeweled urns. Water snakes and frogs, praying mantises, more tadpoles. I spent my paper route money on ethanol and formaldehyde and collecting nets and snake hooks, all ordered from the Carolina Biological Supply Company catalog that Mrs. Lomax gave me, which I kept as dog-eared as other kids kept a Sears Christmas catalog.

To my knowledge, my mother never said no. I think I could have shown up on the back door stoop with a black mamba, or a zebra, and her response never would have wavered: “Keep it in your room,” she would admonish. “It’s not going to get out, is it?”

At this point, it seems that I might offer a slight defense. It’s not that I wasn’t a typical kid, please understand. I played backup first base for the Burger Chef Giants. I loved backyard football. I could beat just about any kid in the neighborhood in basketball except for my pal Timmy Lassiter. I was nuts over plastic models.

OK, OK. I was nuts over plastic dinosaur models, not hot rods. But still.

These days, it’s fallen out of favor to catch and keep wildlife. I count many scientists as good friends, and I know they’re cringing with all this talk of my DIY SeaWorld crafted in a childhood bedroom. And with good reason. In most cases these days, it’s illegal. And it’s not fair to wild creatures — wasn’t then and isn’t now — to snatch them from their homes and raise them in boxes. That thought never occurred to me in the early 1970s, but it was a different time.

Yet something else is clear to me. I don’t think I would do what I do for a living today — write about the natural world and all the ways we’ve come to intersect with it — had it not been for Mrs. Lomax and her soaring cabinets of curiosities. And her particular interest in me. She saw in me a kindred spirit, and she encouraged my love of snakes and anatomy and taxonomy and natural history. 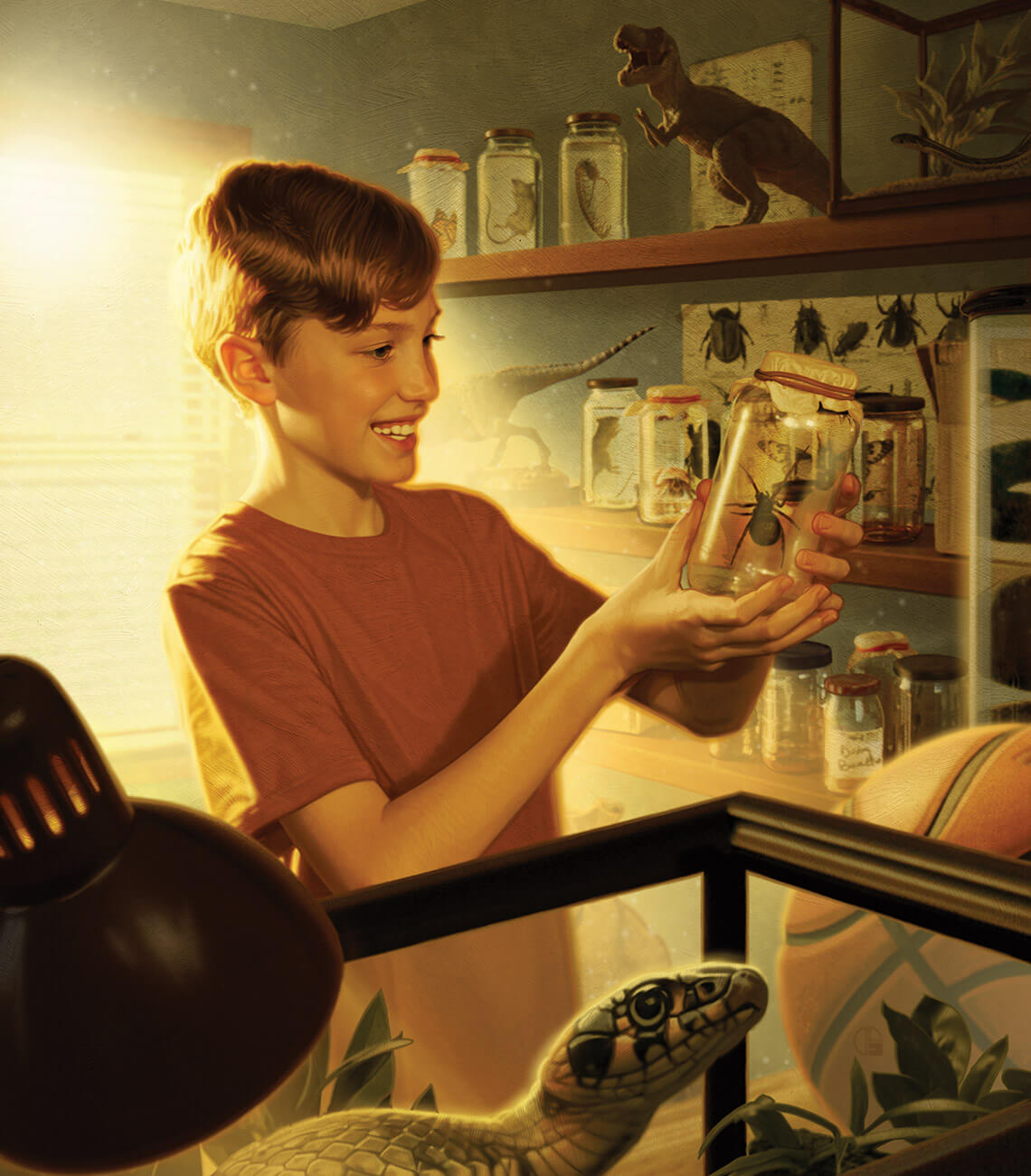 From the seventh grade on, I was wild — pun intended — over wildlife. I collected books on reptiles and amphibians. I took a correspondence course in taxidermy. I learned to preserve snake skins. I made plaster casts of animal tracks and trained myself to sit quietly in the woods and let my vision go soft-focus so that my brain could more efficiently pick out movement — there, a squirrel that just shuffled its feet on a limb. A spider on a branch. The shadow of a crow crossing in front of the sun. If the University of North Carolina at Chapel Hill had offered a math course that I could pass, I’m certain I’d be a wildlife biology professor today.

But they didn’t, and I’m not, so now I do my research with a pen and a keyboard and a four-wheel-drive pickup truck. And I can draw a straight line back to that childhood bedroom and its ramshackle shelves stocked with marvels, and to that seventh-grade science class, where snakes coiled inside specimen jars like small, corded tornadoes, and mice and chipmunks stared with permanent wide eyes into the equally wide eyes of who knows how many children. That’s where the fire was laid and lit, and it burns to this day.

I didn’t know it back then. I couldn’t recognize the seeds that were planted. All I knew was that I sure did love me a snake or two, cuddled up in the crisper drawer right there beside the tangerines. Which was perfectly acceptable. Mama said it was OK, I promise.