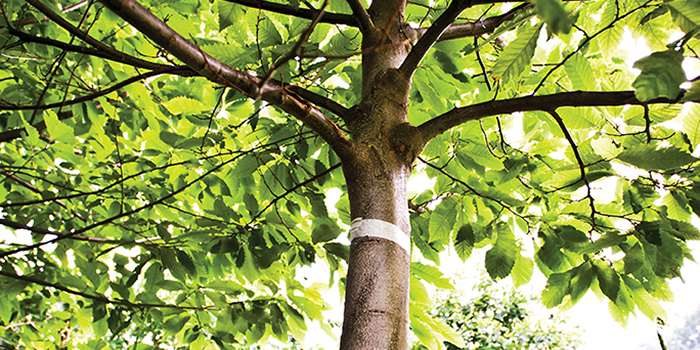 This story originally appeared in the September 2012 issue.

We have to imagine it — there is no other way. Once, the springtime canopies of western North Carolina forests were an unmatched floral display, thanks to a tree that nearly vanished. The American chestnut rose 100, sometimes 120, feet above the loamy forest floor. Most were nearly barren of branches for 50 feet or better, living up to what would become their nickname, “the redwood of the East.” These were massive trunks, some 16 feet in diameter. And they lorded over the forest. In most places, every fourth tree was a chestnut, and along vast ridges, fully 7 out of 10 trees would have been of the tribe Castanea dentata. All told, perhaps 4 billion chestnut trees grew from southern Maine to Georgia, and they put on a pageant.

A starburst of pearly white catkins tipped nearly every branch of the massive trees. Each catkin was nearly half a foot long, streaking like a comet’s tail against the dark surrounding foliage. In the spring, you could stand atop ridges and watch the white flowers roll like surf for miles. In the fall, you could gather the fruits of these flowers, the sweet, starchy chestnuts clad in prickly burs, by the barrelful.

No longer. For now, we must conjure it all in our minds. We can read about the magnificent chestnut forests and gaze at the old photographs of monstrous trees rising like furrowed cliff sides toward a sky blotted out with their serrated leaves and wonder what it was like. But we can witness it no longer. “All words about the American chestnut are now but an elegy for it … gone down like a slaughtered army,” wrote the naturalist Donald Culross Peattie.

But there may come a day. 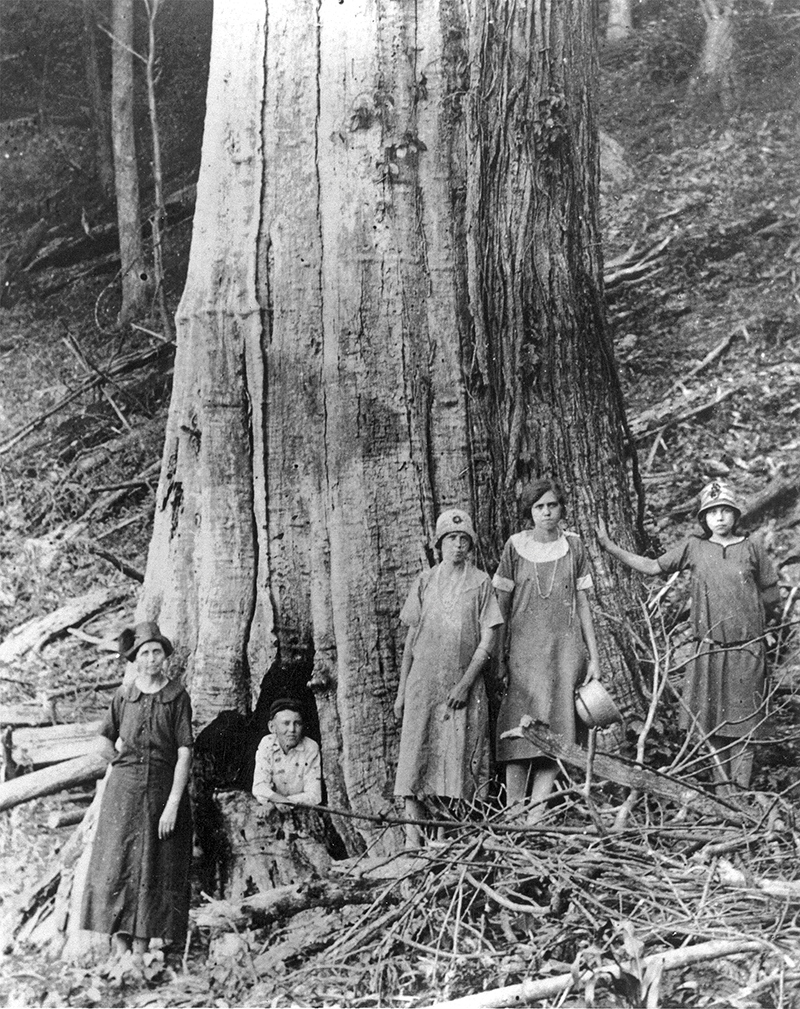 The Family of James and Caroline Shelton pose by a large dead Chestnut Tree in the Great Smoky Mountains National Park circa 1920. photograph by Chestnut Foundation

The demise of the American Chestnut is woven into the nation’s lore like the tragic wartime death of a beloved family member. The killing fungus — Cryphonectria parasitica — was first discovered in 1904 on a chestnut growing in the New York Zoological Park. Originating in Asia, the blight had little effect on Asiatic chestnuts that evolved with it, but American chestnuts were defenseless to it. The fungus entered the tree through cracks in the bark, creating sunken, orange-black cankers on the trunk. Vast networks of unseen, threadlike filaments encircled the tree, choking off water and nutrients, killing each one down to the ground.

Once affected, a single tree became a spore-producing blight factory, infecting its neighbors. Spores hitched a ride on the wind. Insects and birds picked up blight spores on their wings and legs, and carried the disease to distant forests. The blight raced across the Appalachian range at an average rate of 50 miles a year. Within eight years, it swept New England.

To halt the genocide, a mile-wide chestnut blight “firebreak” was carved across Pennsylvania, but to no avail — the fungus leapt this botanical Maginot Line. It showed up in North Carolina as early as 1912, and by 1925, the fungus had invaded 75 percent of the chestnut’s North American range. A few decades later, perhaps 4 billion chestnut trees stood dying or lay dead.

The American chestnut forest was erased from the face of the planet. It was an unnatural cataclysm, a complete victory of an alien invader, and it changed forever the forests of North Carolina and much of the eastern United States. Gone was the tree that nurtured Native Americans, passenger pigeons, and pioneer communities. Gone was the forest that had evolved over millennia. In its place, there are oaks and hickories and poplars, but these trees are stand-ins, substitutes for the native chestnuts whose grandeur can only be imagined.

A little-known backstory to the chestnut disaster is that many North Carolina chestnuts had, a century earlier, suffered a debilitating blow. While their stronghold was in the high country, chestnuts were locally common far to the east. They cloaked the forests of the foothills, but petered out around Person, Orange, Alamance, Randolph, and Stanly counties. Starting in 1824, however, an exotic root-rot fungus felled chestnuts that grew in low, moist habitats across the South, toppling most of the trees in the Piedmont. 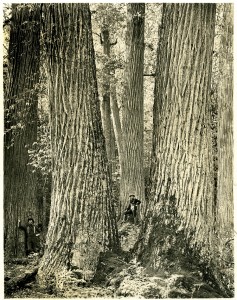 In January 1910, the American Lumberman published this photo of giant chestnut trees in western North Carolina, to show how their size compares to that of the average man. photograph by Chestnut Foundation

No matter which wave of illness felled them, there has never been another tree like the American chestnut. Its wood was light, strong, rot-resistant and straight-grained.

The tree was critical to the building of America and beloved by early horticulturists. Philadelphia botanists John and William Bartram listed the American chestnut in the first American nursery catalog, published in 1783. They sent chestnuts to George Washington’s Mount Vernon and Thomas Jefferson’s Monticello.

Chestnut wood was used for furniture, interior paneling, charcoal, and telegraph and then telephone poles. In 1919, North Carolina produced 70 million board feet of chestnut lumber — trailing only West Virginia and Pennsylvania. Chestnut bark is rich in tannins, and untold tons of bark were shipped to tanneries, where it was chipped and boiled and then used to soften the hides of deer and bear that had, themselves, fattened on its nuts. In a single year — 1909 — 100,000 cords of chestnut fed five large tanneries in the Asheville region alone.

Even in death the tree proved useful. Much of the stacked log fencing along the Blue Ridge Parkway is constructed of chestnut logs, and the highly prized and rustic-looking “wormy chestnut” comes from blight-felled trees that were then infested with wood-boring insects.

Here’s the curiosity: You can still find American chestnut trees. A few escaped the blight, and hang on. In North Carolina, several hundred mature chestnuts still stand, but their future is precarious. And throughout the high country, young trees are fairly common. You can find them along the Appalachian Trail, in sunny clearings along the Blue Ridge Parkway, in state parks and private woodlots. One of the more insidious aspects to chestnut blight was that its cankers choked the trees to death down to the ground but left stumps and roots grasping tenuously to life. All these years later, these ancient stumps still sprout. The young trees shoot for the sky, saw-toothed leaves catching the sun, by every indication a sapling on the way to grand stature. It is a short-lived exuberance. The rare tree might grow large enough to produce a few flowers and prickly seed burs, but chestnut blight fungus still lives in the bark of blight-resistant oaks and ash. It infects and kills most young chestnuts before they are more than a few inches in diameter.

But at this very moment, on farms and woodlots scattered across North Carolina and the rest of the native range of the species, an army of volunteers is working on perhaps the most audacious conservation project of our time: bringing back the American chestnut. While state and federal agencies take part in restoration research and fieldwork, most of these workers are part of The American Chestnut Foundation, founded in 1983 by a trio of plant scientists. TACF, which is headquartered in Asheville, now has chapters in 16 states. 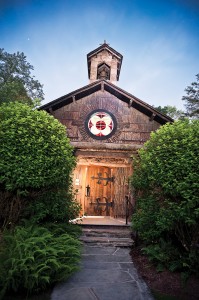 You can still find chestnut in several buildings around the state. The All Saints Chapel In Linville is made of almost entirely chestnut. photograph by Chestnut Foundation

This work takes place in volunteer orchards scattered across 15 states. In North Carolina, more than 2,000 trees grow in more than 40 breeding orchards. To prevent experimental trees from being accidentally pollinated by nontarget chestnuts, workers snip off the male reproductive organs and protect the female parts with bags individually attached to each branch or twig. Later, the flowers are pollinated by hand with pollen from the desired strains of backcrossed trees, and those protective bags are replaced. Flower by flower. Branch by branch. Tree by tree.

This process is as laborious and time-consuming as it sounds. It is work that would wear out a Hercules, a Sisyphus, a Quixote. The quest for blight-resistant American chestnuts has been going on for more than three decades, but by backcrossing generations of Chinese and American chestnuts, volunteers and scientists have now produced a “restoration chestnut,” a hybrid tree that is fifteen-sixteenths American.

The trick now is to see which one of those trees retains the blight-resistant characteristics of the Chinese trees, and the only way to do that is to put them in the ground and let them grow. In the spring of 2009, 500 seedlings of these 94-percent-pure American chestnuts were planted in national forests in North Carolina, Tennessee, and Virginia. During the next five to 15 years, TACF state chapters will work to produce their own regionally adapted restoration chestnuts.

It may be that the North Carolina mountains yet boast of groves of giant American chestnut trees, of forests festooned with chestnut flowers, of open fires licking at chestnuts. If so, it will be thanks to the work of those who toiled for decades, never knowing if their efforts would be in vain, knowing only that they themselves might never live long enough to know.

And clinging to this hope: There may come a day.

Monsters:
Grew to 100 feet or more

Great for timber:
They were straight, and mostly branch free for the first 50 feet.

The blight:
In 1904, scientists first discovered the blight in New York City.

By 1950:
Approximately 4 billion trees had been destroyed.

The overall scope:
Ecologists called the chestnut blight the largest ecological disaster of the 20th century.

The Carolinas chapter of The American Chestnut Foundation is at work year-round — planting, watering, weeding, pollinating, collecting, protecting, researching, and traveling across the region. Contact the group by visiting its website at carolinas-tacf.org, or by sending an email to tacfcarolinas@acf.org.

T. Edward Nickens is an editor-at-large for Field & Stream. His articles also appear in Smithsonian and Audubon magazines.