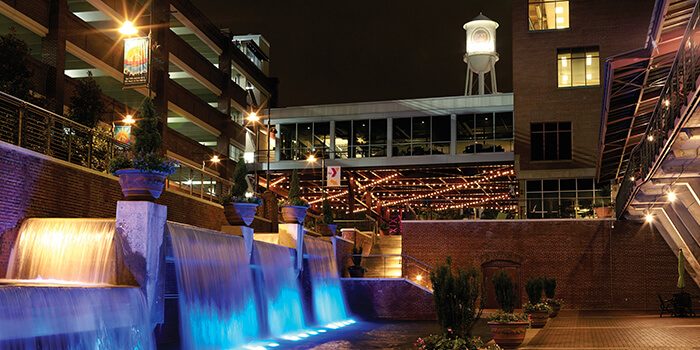 An enduring aroma from my childhood is that of a cigarette being pressed to the orange coils of an automobile lighter. Tobacco smoke, and its heady, lulling scent, filled the car, and I loved it. Aroma memories refuse to die, thank heavens. And, thank heavens, so do mills.

“SWAT teams trained here,” isn’t an ideal marketing slogan to attract The Nature Conservancy, WUNC radio station, or Duke University’s Office of Information Technology. But it’s the truth. The American Tobacco factory declined into such a “center of decay” in the 20 years following its 1987 closing that it was the ideal location for law enforcement to practice anti-crime and anti-terror tactics. 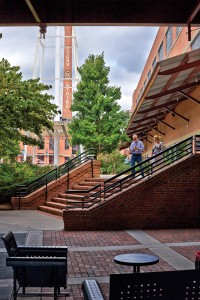 Having celebrated its 10-year anniversary last year, the American Tobacco Campus has been referred to nationally as “the definitive example of re-purposing and re-developing historic properties,” and began what has been dubbed the Durham Renaissance of downtown. On any given summer night, a baseball game, a showing at the 100-seat theater, and a concert on the “island” beneath the iconic Lucky Strike water tower might take place. More than one million people this year will walk the original sidewalks — once loading docks — beneath corrugated tin awnings, into bays beneath criss-crossing metal structures that once ferried tobacco bales from building to building, beginning in 1874.

Because it still looks like a mill. That’s the beauty of its resurrection. When Capitol Broadcasting bought and reopened the American Tobacco factory in 2004, it covered one million square feet. Two hundred thousand have become parking; 800,000 comprise an office, residential, and entertainment complex. The names of its founders — Reed, Washington — are still outlined or indented in brick or concrete on the building entrances. Each building’s signature architectural feature is a large “through lobby” at multiple entrances so that, street-side, the effect isn’t one long brick wall. “These mills had vast open areas, after all,” says Michael Goodmon, vice president of real estate, Capitol Broadcasting. It’s easy to spot the original brick walls. Indeed, the Old Bull building — built by William Blackwell and Julian Carr in 1874 — was the first all-brick tobacco factory in the United States.

Most mills, though, didn’t have waterfalls cascading throughout their property. American Tobacco does. The creek flows in what was an old railroad bed, one of six sets of tracks originally running through the area. A railroad car from the late 1800s sits on a single remaining stretch of track, serving as a reminder, and as a meeting place. Just beyond is the world headquarters of Burt’s Bees, where some 80,000 literal worker bees live in window hives for passersby to observe, and to promote a fledgling nonprofit for urban beekeeping.

“Incubating” is how Goodmon describes what’s going on in the buildings’ basements. In this Google Tech Hub called American Underground, created solely for tech-oriented entrepreneurs, reside some 200 companies. The Startup Factory, NC IDEA, and a coding academy fill space where cigarettes were turned out by the millions for a century.

If you need reminding that this was a factory, head for the boiler building, where the original, massive, partly rusted boiler still stands at least three stories high, like a sepia-toned print depicting the Industrial Revolution. At one point, American Tobacco produced so much power that they sold the extra to the city of Durham.

But near an outpost of Durham’s history museum, framed vintage ads for Lucky Strike smoking tobacco confirm that remembered aroma. “Men like the flavor, women enjoy the fragrance,” it reads. Told you so.