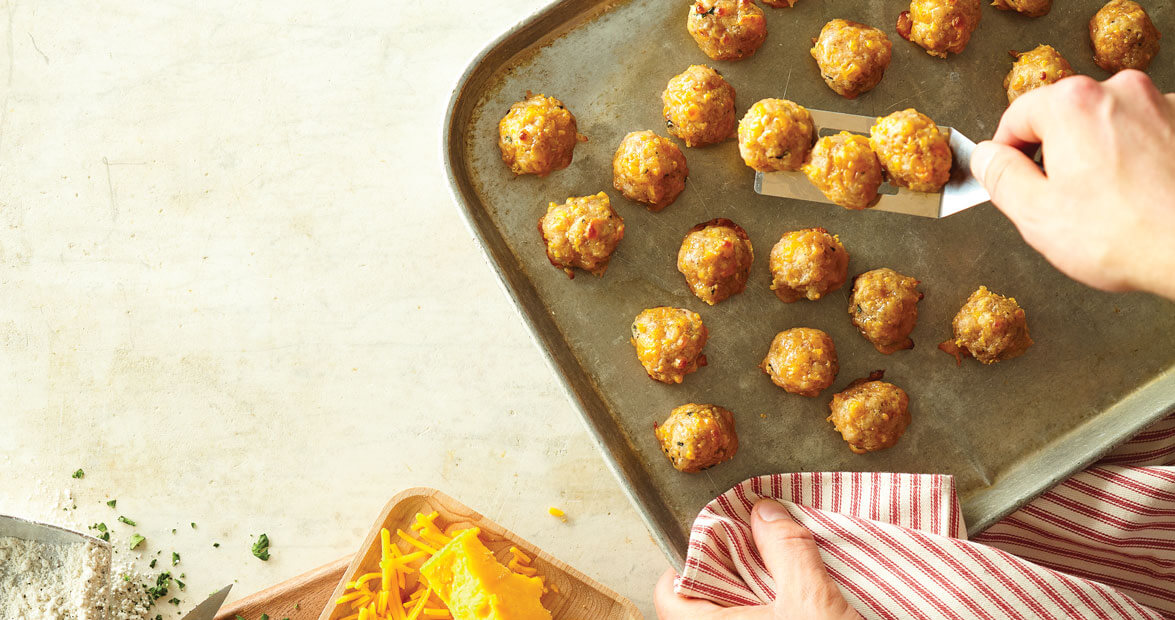 is the season for sausage balls. Sure, they’re perfectly at home on the table for Easter, the Fourth of July, and any Sunday supper, but a holiday buffet isn’t complete without a paper-towel-lined serving bowl brimming with sausage balls. They just belong there, tucked among Grandma’s barbecued cocktail weenies, Uncle John’s famous cheeseball, and Dad’s secret-recipe Chex Mix. (The secret? He bought bags of it at Food Lion — and everyone knows it, Dad!)

The beauty of sausage balls is their simplicity. The recipe calls for three easy-to-find ingredients, in amounts best described as “enough.” Enough sausage so you don’t end up with meat-flavored biscuits. Enough Bisquick so you don’t end up with glorified meatballs. And enough Cheddar cheese to make them divine. I suppose you could gussy them up with fancy smoked, organic yak Gouda, but … wait, I take that back. You shouldn’t tinker with perfection. Mom, if you’re reading this, you can’t change your recipe.

As it happens, “enough” is also the ideal yield you’re shooting for — too few, there won’t be enough sausage balls left over for late-night, post-party grazing. Too many, and … well, I suppose that’s a possibility, although I’ve never heard of such a thing actually happening. The trick to sating your guests’ appetite — while still having a host’s share when all is said and done — is trickery, so don’t let Santa see. Step 1: Bake a bazillion sausage balls. Step 2: Set out a half-bazillion on the buffet table. Step 3: Stash TWO backup containers of sausage balls in the fridge — one to replenish the buffet, the other to save for yourself for later.

When hungry friends and family members start streaming over the welcome mat, watch their faces. After their eyes finish taking inventory of the mantel and sizing up how under-/over-dressed they are, their other senses will kick in. Is that pumpkin pie I smell? And turkey? And, wait … is that … Then, reflexively, a smile — wide and earnest — will spread across their faces. That’s the moment when a certain scent reaches a part of the brain that scientists call the sausage-ball lobe. From there, guests are locked in on the smell and are almost cartoonishly drawn to the sausage balls.

Whether for a casual after-work soiree, a pre-dinner mixer, or a formal holiday fete, the role of sausage balls is the same: provider of happiness. It doesn’t much matter if they’re eaten with a fork or speared with a toothpick or scooped up by hand. It’s also a given that “visits” to the buffet table will turn into “stops,” which means that by the end of the party, a few guests will be camped out there, plucking sausage balls from the bowl like it’s their personal trough. And that’s OK, because everyone is in a state of holiday good cheer and sausage bliss, and … you still have your personal supply hidden away. (They’re still out of sight, right?)

When the last of the stragglers clear out and Grandma’s china is back in the hutch and the blaze in the fireplace is down to a few glowing embers, it’s time for a little quiet time, a much-needed nightcap, and a snack that you only got to serve and not eat all evening. Fortunately, sausage balls pair with every party beverage — from Budweiser to Beaujolais, from eggnog to punch — and while they are best served warm, sausage balls are pretty amazing chilled, too, eaten by hungry hosts bathed in the light of an open refrigerator. Indeed, there is no wrong time, or wrong way — splashed with Texas Pete, dabbed with ranch dressing, dipped in queso — to enjoy the season’s favorite spheres of sausage magic.

Bring sausage and cheese to room temperature and combine in a bowl, mixing well.

Add paprika and biscuit mix, adding up to 3 cups of biscuit mix for desired texture. Roll into small balls.