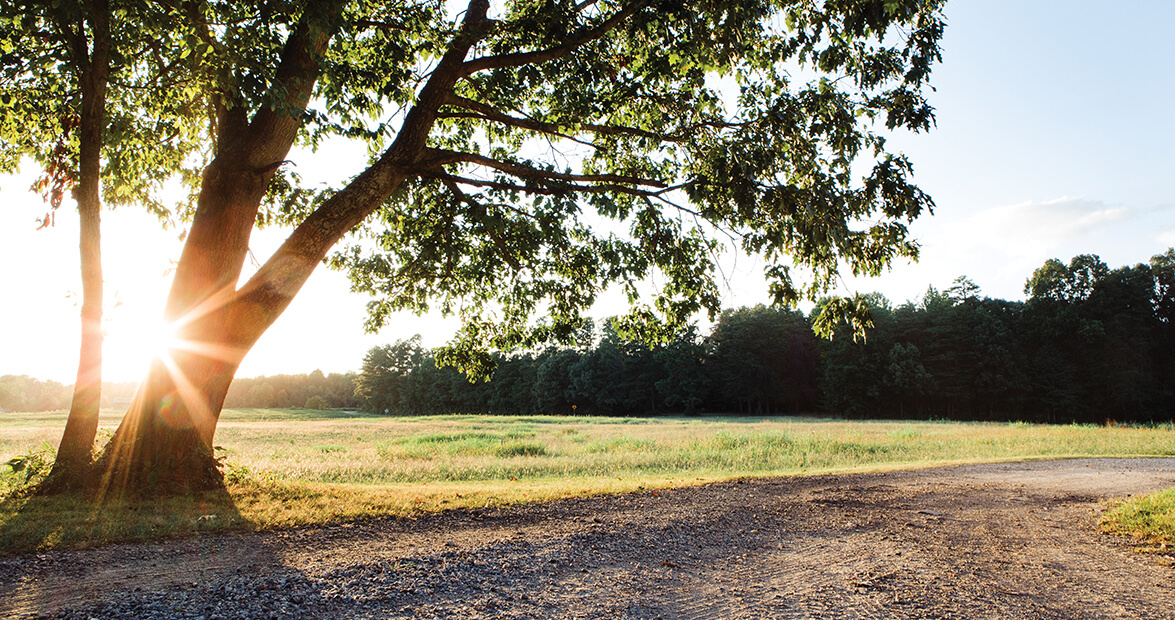 And to the spirit. Ka-thunk. Front tires, rear tires; a quarter of a second, tops. Ka-thunk, and I can feel it in my bones. Ka-thunk, and I’m off the blacktop and onto gravel. There’s hard-packed rock under my wheels, and although the unpaved road ahead is connected to the asphalt behind, there’s an altogether different feel to the journey now. I slow down and keep my head up. The woods and fields press in close. There’s no telling what’s around the corner.

Which is part of the allure of driving dirt roads. Be they dirt, gravel, or hardpan, these are the most democratic of our transportation corridors, intimately related to their ancestors: the plank roads, the farm-to-market roads, the macadam roads. While interstates are closed to most traffic that doesn’t involve an internal combustion engine, an unpaved North Carolina secondary road is open to all: boots, bikes, cars, trucks. Horse-drawn sleighs, if there’s enough snow. Ride a donkey down a dirt road, if you’d like.

Just keep your eyes peeled and your mind wide open. The best dirt roads carry a traveler to a different state of consciousness, not a particular set of coordinates. Listen to the tick-tang of rocks ricocheting in the wheel wells, the gravel nicking the undercarriage, the corduroy rumble of a rough stretch of washboard.

It’s a song worth seeking.

To be fair, I didn’t exactly grow up on a dirt road. Still, to get to our driveway in High Point you first had to turn onto a short stretch of unpaved road somehow overlooked by city fathers, and driving that 50-yard stretch of gravel was a growing-up refrain that I can still hear 50 years later.

Ka-thunk. I wonder what’s for dinner.

Ka-thunk. I made my curfew.

It was enough of a dirt road to make an impression, but not enough that our family car was grimed with road dust, or the windshield spider-webbed with cracks. So I understand that not everyone appreciates a dirt road like I do. To some, unpaved roads suggest a certain backwardness, as if a dirt road confers a second-class status to those overlooked citizens yet to fully enjoy the hardtop fruits of modern life. It’s a perspective that goes back at least to the early years of the last century, when the South was swept up in a heady flush of road-building plans, and North Carolina crowed of its widely known status as “the Good Roads State.” Fresh, newly paved state highways, wrote one official, would “carry light into dark places, [and] build up and improve the morals of our citizens.” No wonder a dirt-road address came to carry a scarlet letter’s shame — and still does, in some quarters.

In 1989, Gov. Jim Martin and the General Assembly launched a quixotic effort to pave all the state-maintained dirt and gravel roads in North Carolina. Nearly 15,000 miles of unpaved rural byways were on the list, and 26 years later, the asphalt rollers are still chugging along. 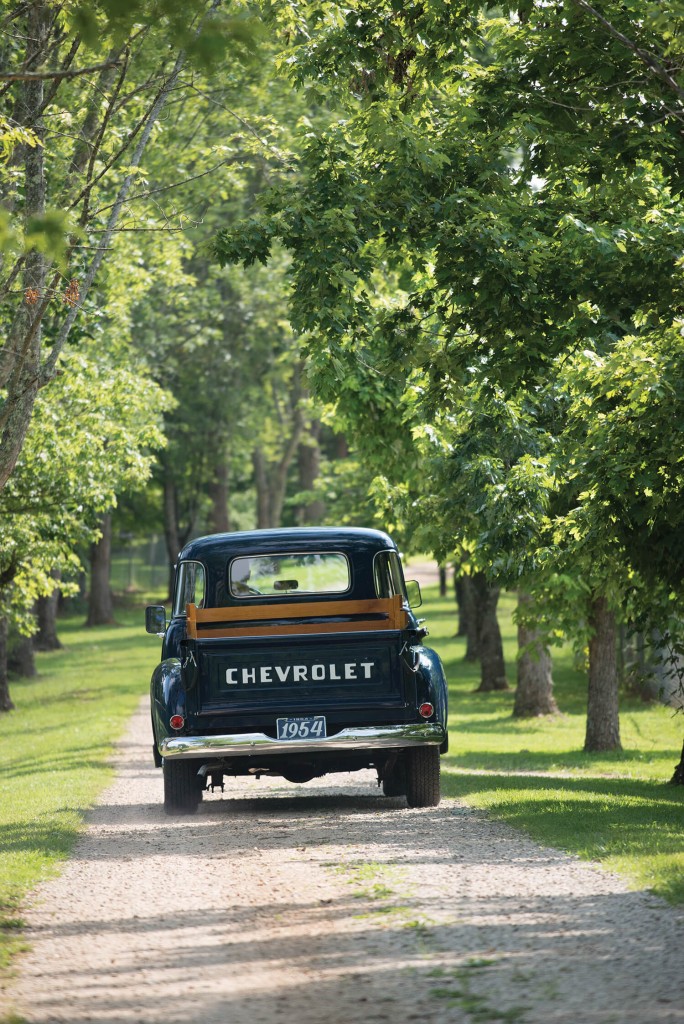 David Wilson’s ’54 Chevy pickup looks at home on a dirt road in Linville. The truck has seen its share of backroads since Wilson bought it in 1977, when he was in high school. Photograph by Emily Chaplin photograph by joy kaplan

I was a little heartbroken when I heard the news. In parts of Italy, the strade bianche — the “white roads” that wind through farm country and olive groves — are actually protected. They’re recognized as integral parts of the pastoral mosaic —as “one more piece of land that breathes,” in the words of one writer, “a gesture of respect by man to the landscape, an invitation to slow the frenetic pace down.”

I buy that. I’d hate to see all of our white roads tarred and shouldered. I don’t want to drive all the way to the beach on a dirt road, but a few miles of gravel under the tires is good medicine for the soul.

The dirt road I miss the most was a short, half-mile dogleg in the Neuse River lowlands, deep into Johnston County. When Markie and Jack were younger, I leased hunting land off the end of the gravel road, 400 acres of cypress-gum bottomlands and pines and oaks that seemed a world away from Raleigh. If we hunted in the mornings, leaving the house an hour and a half before dawn, my children would be sacked out before we exited the Beltline. As soon as I turned onto that dirt road, however — ka-thunk — they’d stir awake. Ka-thunk and sleepy little eyes would crack open. They knew. They felt it. We’ve arrived. Time to wake up to some new adventure.

Fact is, the farmer on my dirt road was ambivalent about plans to pave. There were only two occupied houses on the road, which dead-ended into a creek, and hardly anyone ventured its way. Perhaps that mitigated any ill will he might have felt toward gravel — there just weren’t enough cars to coat his truck with aggravating grime, not enough passage to pothole the road. But the gravel, he told me, served as a sort of human filter, a sieve through which only a few would choose to pass. A dirt road intimates some level of mystery, a certain otherness that winnows away a high percentage of rubber-neckers and Sunday drivers. A few folks — such as myself — seek them out, but most drivers avoid dirt roads. Once paved, my friend figured, the genie was out of the bottle. “Everybody and their brother will be driving around back here,” he grimaced. “You’ll see.”

He told me this while we were parked in the middle of the dirt road, chatting through open truck windows, a sea of soybeans on either side. No one honked to prompt us to clear the road. Overhead, on the slender utility wires that fed the few houses and a barn or two, fat gray doves perched and preened. They’d been picking up grit from the dirt road. My buddy seemed a bit wistful about the era that would pass with the coming of pavement. His mama convinced him to sign on, he said. Perhaps she’d lived too long with the sentiment that the only good road is a paved road.

After that road was graded and paved, it was never the same again. When the tires crossed onto the fresh blacktop, there was only the slightest shift in the hum of the tires. No bumpity-bump, no visceral feel-it-in-your-belly sensation that we’d arrived at a place of some mystery and discovery. It was the same road, same name, and same four-digit secondary road designation. But not really.

Dirt roads are still out there, but you can’t just turn the key and think you’re going to find one without a bit of searching. To the east, on the Alligator River and Pocosin Lakes national wildlife refuges, gravel and dirt roads push for miles into pocosin swamps and coastal woods. I once took a full-moon drive down Buffalo City Road to where it dead-ends at Milltail Creek, stepped outside the truck, and did my best full-throated Halloween howl. Red wolves answered back from three directions. In the western part of the state, miles of gravel Forest Service roads lattice the Nantahala and Pisgah national forests. I’ve driven them for 30 years — drove them just last week, in fact — dropping into remote trout stream valleys with crisp mountain air and the acrid scent of hot brakes pouring through the truck window. 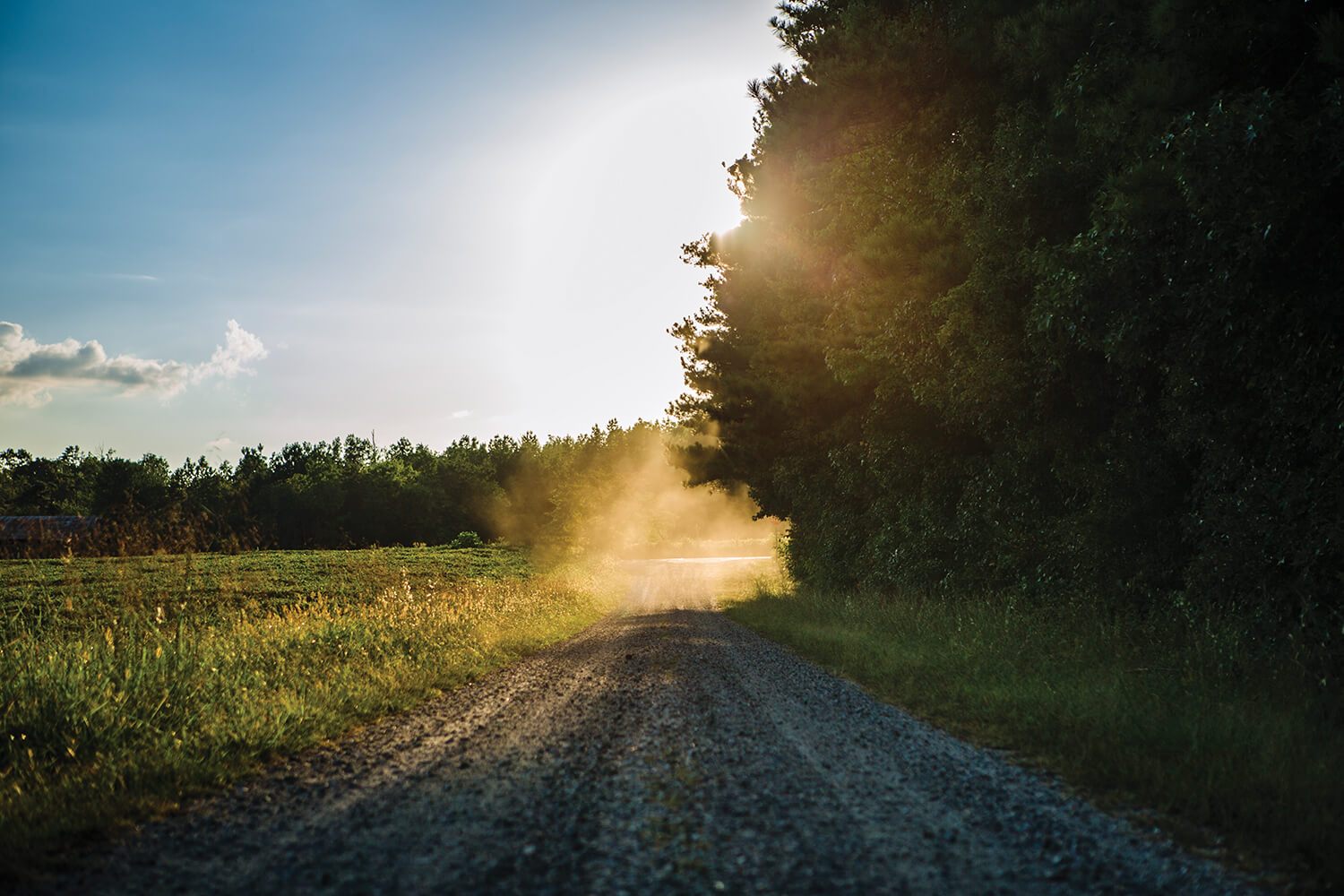 But notice the subtext of these modern dirt-road experiences: Those roads are on big swaths of public lands — national forest and wildlife refuges —  where dirt and gravel are beyond the reach of North Carolina’s asphalt czars. I won’t turn down a rollicking dirt-road cruise that drops like a rock through forested mountains, but those drives lack the egalitarian nature of a gravel path through a working, peopled landscape, where each curve unveils new evidence of a human experience nearly forgotten: old barns, rusty mailboxes, derelict pickups half-swallowed by kudzu.

As with much in life, however, that which grows rarer becomes all the more treasured. It turns out that I’m not alone in my affinity for an unpaved stretch of road in an untrammeled corner of countryside. On the Internet, motorcycle and mountain-bike enthusiasts post favorite gravel rides. I’ve even found an online searchable GIS map that shows every unpaved road in every North Carolina county.

Scrolling through the database to plot out a Saturday afternoon dirt-road drive is hardly as serendipitous as catching a glimpse of gravel out there beyond the bean fields somewhere, and turning the truck around just to see where it goes. But it’s a modern world, and if I have to use a computer to track down a gravel road, to find that bump, that thump, that two-note lift to the spirit, so be it.

It’s worth the trouble. Ka-thunk. Here we go. Ka-thunk. Both hands on the wheel. No telling where I’m headed now.