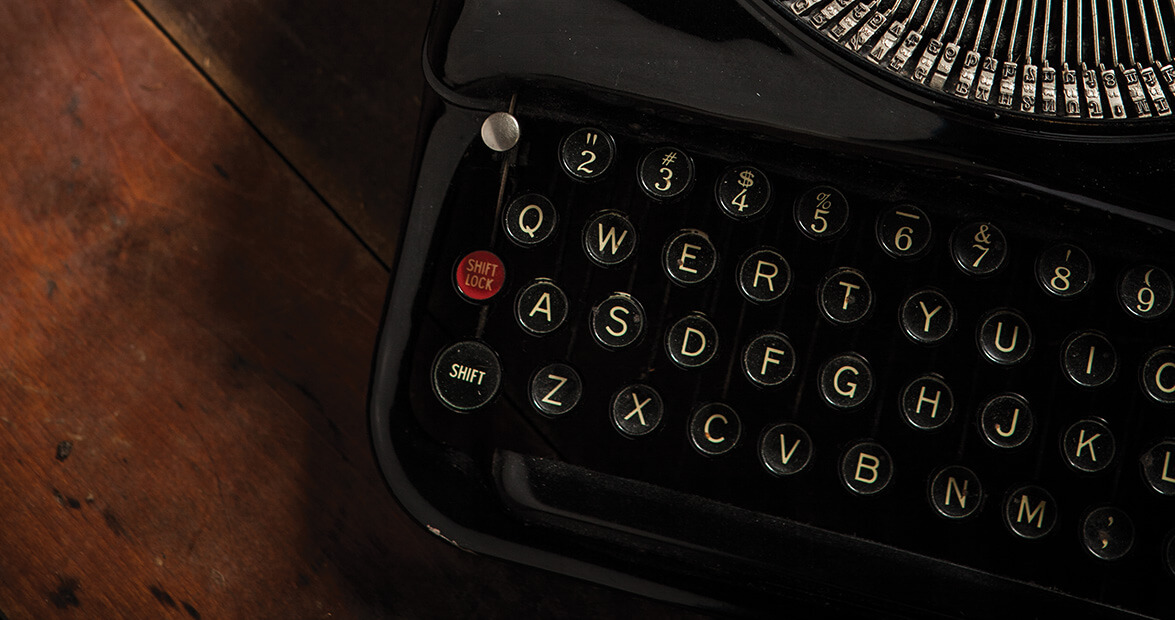 I came of age as a writer in the noisy upstairs newsroom of a small weekly newspaper. The job paid $160 a week and came with a Royal typewriter — a solid metal behemoth I could hardly lift and nicknamed “the tank.”

You could tell when the city beat reporter was onto a good story by the staccato chatter of his typewriter, the heavy keys whanging down against the metallic-sounding board of his desktop, the bell dinging as though marking the rounds of a prizefight, followed by the lever’s rasp as it advanced the paper.

When the sports desk was humming, too, and the lifestyle reporter was chiming in with a measured beat, and the editor was furiously banging out another outraged editorial, the air sang with a kind of symphonic resonance. The typewriters pounded out a musical score that inspired and energized each of us — as if the sympathetic vibration of one somehow caused the one at the adjacent desk to start clattering out its own words, its own sentences, the true here-and-now stories of our little town.

It took muscle to punch the keys, to make them leap up and slap inked letters onto the newsprint paper, hard enough to mark not just the top sheet but the two additional sheets sandwiched between carbon paper.

My first office at the University of North Carolina Wilmington had the identical typewriter. Now I have a sleek, noiseless Apple computer and — instead of paper — two large flat-screen monitors to see where my words fall, and I find myself buying typewriters, finding ribbons online, letting my fingers feel the joy of punching the keys big as pennies, and listening to the clacking music once more.

I’ve discovered Scott McNeill, a third-generation typewriter collector who now runs The Vintage Typewriter Shoppe, Inc., an online operation in Mint Hill, east of Charlotte. He specializes in finding and refurbishing manual machines built in the last century, some even older — about 175 a year. His clients used to be mainly older people in the market for an antique, nonworking collectible. Now they’re professional writers, college professors, and, increasingly, kids as young as 7 — all of whom want a working machine for daily use.

College students complain about being too wired. “They’re tired of being plugged in and accessible 24/7,” McNeill says. “They have thoughts that they want to express, but they want to keep them private.” No Twitter tweets, no Facebook posts for these writers.

And they all want the music, he tells me. “They want that smack and that bell to ding at the end of the line.”

Typing on a manual keyboard slows you down so you can actually write more smoothly. For one thing, if you try to type too quickly, the type bars jam into one another and stick. “Manual typewriters are a precision instrument as well as a work of art,” McNeill explains. “There’s a rhythm that must be found to type fast and accurate.”

That rhythm is at the heart of the writer’s craft.

My colleague Clyde Edgerton, whose novels have celebrated North Carolina characters and culture for decades, and whose office is next to my own, keeps an array of antique typewriters in an old farmhouse pie safe. But they’re not just for show. He recounts: “I typed a fairly early draft of The Bible Salesman on the typewriter and have gone back for drafts of shorter pieces when my pitching arm feels a little stiff. Having my fingers pound real typewriter keys seems to set off a slightly unique set of neuron firings, which can ground my sentences in good ways that would otherwise be impossible.” 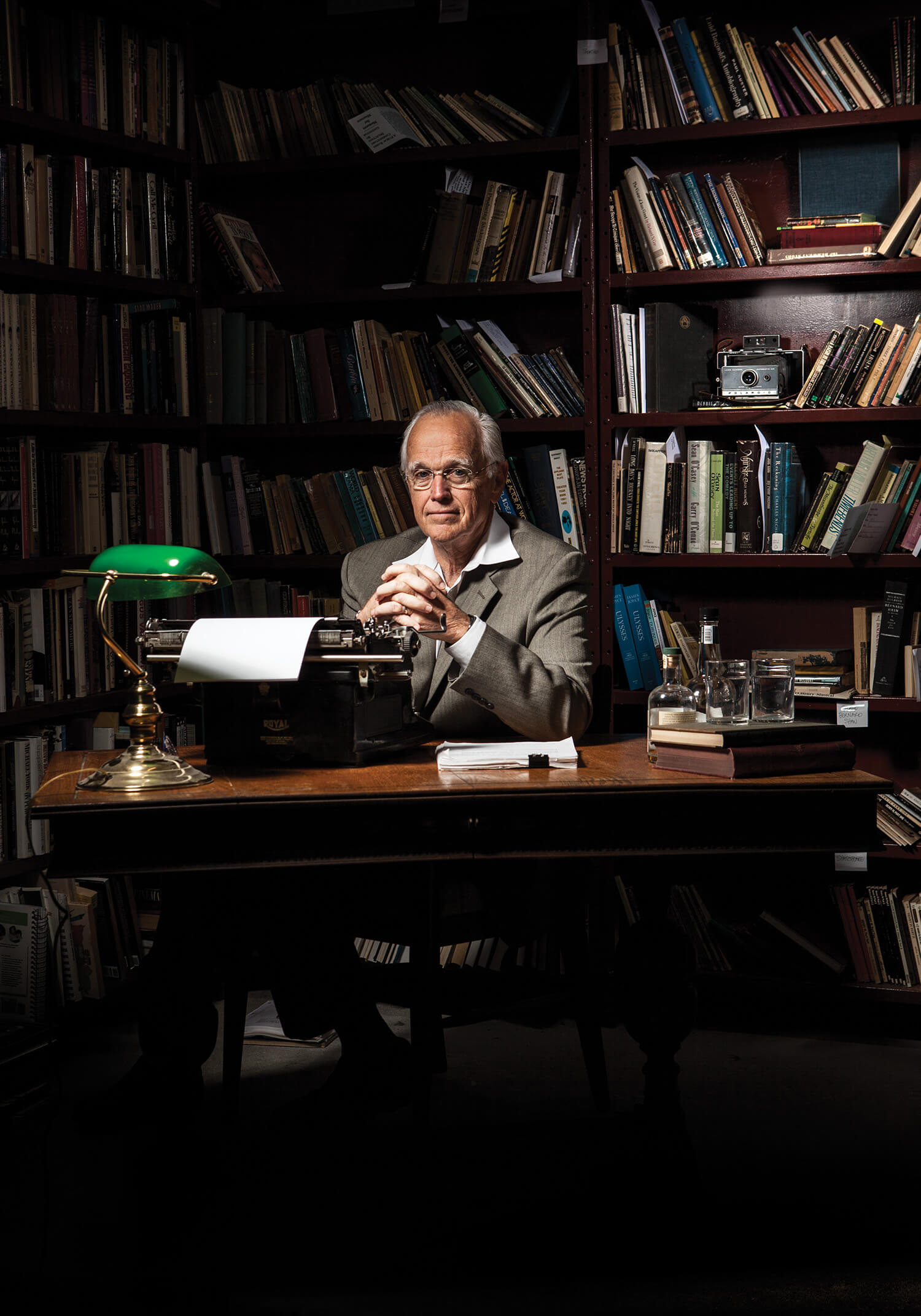 Author of numerous books, Clyde Edgerton believes in a manual typewriter for first drafts. Errors mean you really have to consider as you retype, instead of merely deleting. photograph by Joshua Curry

From time to time, he recommends to his writing students that they try typing on one of the old machines — a way of minimizing the tantalizing distractions available on a computer, and also of urging out a first draft without the constant tweaking, since, on a typewriter, revision means retyping the page. So a writer tends to write a messy draft, peppered with errors, but with a recognizable beginning, middle, and end.

Many young writers are finding fresh satisfaction in the manual punch of fingers against steel keys. Maybe it’s a reaction against all the touch-screening and voice-activated gadgetry that has taken the music out of their words — and language without music is just noise.

One of my own talented students, Jason Hess, for a time actually haunted yard sales, collecting and repairing old typewriters. He deliberately started writing on one of the old-fashioned machines for a simple reason: His spelling was atrocious. “I realized that I shouldn’t be relying so heavily on Microsoft Word to correct my ‘creative spelling,’” he recalls. “The typewriter forced me to focus on every letter. There was no going back.”

But a typewriter collection doesn’t travel well. “When I drove out here from Idaho” — to the MFA program at UNC Wilmington — “I could only bring what would fit in my car,” Hess says. “The machine I ultimately brought was a Royal portable. It’s the sexiest of my typewriters. There’s just something great about the action, and something enticing about the black-painted, stamped-steel body.”

And it’s true: Just sitting there, a Corona or Royal or Remington looks enticing — like a steam engine ready to take you somewhere wonderful.

Edgerton raises the obvious question: “Then why don’t I use a typewriter all the time? Because I’m lazy and have the confidence — based not in reality, perhaps — that I can throw enough strikes using a computer keyboard to win the game. But deep down, I worry. I think, all things being equal, that if confined to one device, I might write fewer but better sentences on an old typewriter.

“But, in any case, I’ll keep occasionally calling on the closer: my smoothest old portable — a Remington.”

My father bought me my first typewriter when I graduated from high school. He could no longer read my handwriting. Despite patient years of training by Franciscan nuns in the Palmer cursive method, my penmanship had become frantic scribbling. I was always in such a hurry to get things down before I lost the thought.

That first machine was a blue-and-white Royal portable, and in graduate school, I happily wrote my thesis novel on it. Or most of it — the final page was literally in the typewriter platen on my kitchen table when my house was burglarized, the typewriter stolen along with the rest of my valuables.

A sympathetic fellow student sold me a 1930s maroon Corona Streamline for $25, and that became my workhorse machine for many years.

Writers bond with individual typewriters, something McNeill has heard time and again: “It becomes a very soul-searching, very spiritual relationship between the person and the machine.”

As McNeill puts it, “Modern technology is soulless — it’s just evil for a writer.”

Recently, I attended a national writers conference. One of the booths featured a typewriter and an invitation for visitors to type a secret on a slip of paper and pin it to a board. I remember one young woman tentatively placing her hands on the keyboard and pressing the keys — and nothing happened. You can’t “keyboard” a manual typewriter. So I showed her how to do it, and she looked at me with astonishment. “That’s hard!” she said.

This story appeared in print as “Manual Labor.”