The sight of life-size steel horses, pigs, and cattle on a grassy patch along Dickinson Avenue might suggest that Greenville is a place that has put artistry out to pasture. But the sheer size of this herd — which also includes deer, a camel, a giraffe, and an elephant — is a testament that public art in this eastern North Carolina college town is advancing, not withdrawing. Sculptor Jonathan Bowling’s assemblages of inanimate animals have helped breathe new life into the downtown streets near the campus of East Carolina University.

Since the early 2000s, Bowling’s signature steel horses, along with other beasts that he’s been building for more than two decades, have outgrown his gallery space and galloped onto the city’s sidewalks and vacant spots, its alleyways and parking lots. The artist’s dogs, birds, jellyfish, turtles, and an alligator greet passersby outside the North Carolina Museum of Natural Sciences at Greenville. His goats congregate near the underpass of the Dr. Andrew A. Best Bridge. 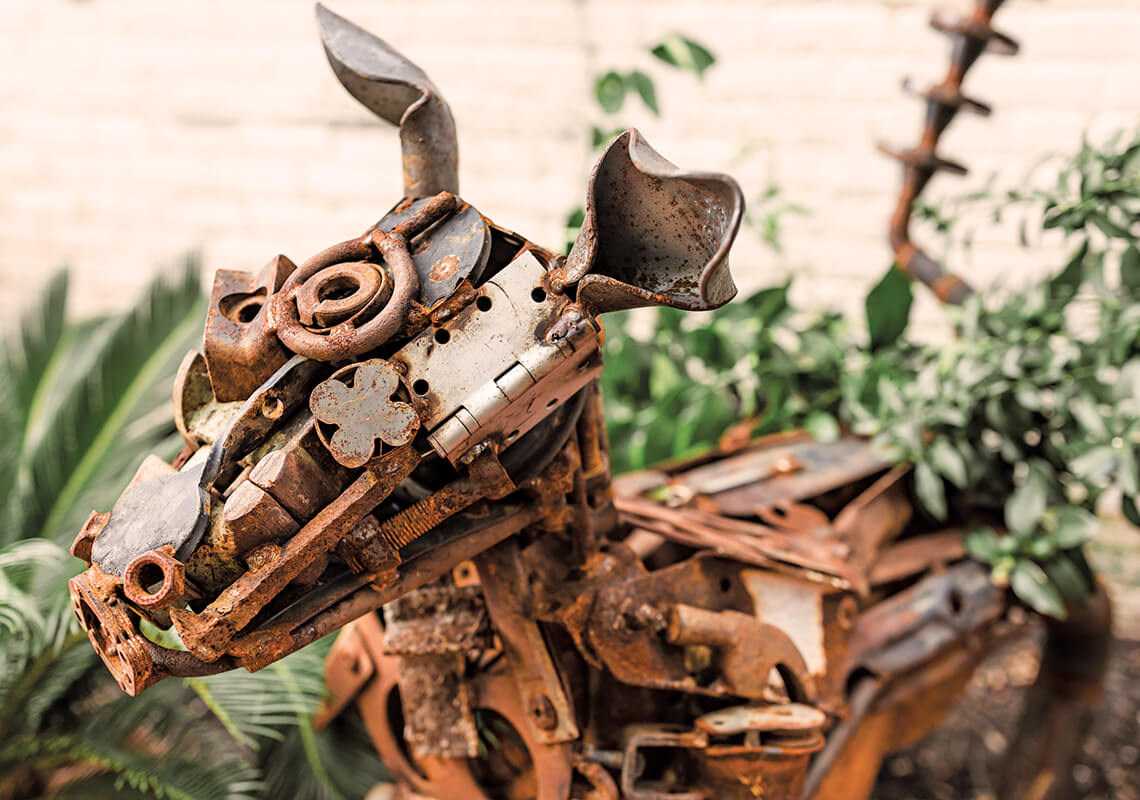 Dog With a Club Eye sits in an alley next to Starlight Cafe on Fifth Street. photograph by Eric Waters

But why has Bowling consigned himself to crafting life-size creatures? “I don’t have a good answer for that,” he says, “except I’m around them.” He’s talking about the area outside of his workshop in rural Pitt County, where more than a dozen real-life goats, cats, and chickens wander about, grazing, hunting, and clucking. “Really, it’s partly about being able to sell [the works]. Plus, with four legs, they’re a lot more stable.”

Whatever his reasons, Bowling’s rust-colored creations have become fixtures in a community that is said to bleed ECU’s purple and gold. His Wind Up Toy, a larger-than-life horse on wheels, is parked in front of the Pitt-Greenville Airport, and other pieces have worked their way into magazine spreads and promotional videos. “It’s very unique to Greenville,” says Holly Garriott, executive director of the nonprofit Pitt County Arts Council at Emerge. “Through his art, he has given Greenville a creative visual identity.”

Bowling had no intention of hitching his wagon to Greenville when he came to ECU in 1996 to pursue a master’s degree in sculpture. But the former Kentucky farm boy, who spent his childhood making things that he didn’t recognize as art, ended up cultivating deep roots in North Carolina.

“When I got out of grad school,” Bowling says, “I didn’t really want to get a 9-to-5 job.” Instead, after some time spent working out of a garage, he leased studio space on what was then a nearly deserted Dickinson Avenue on the west side of town. The roof leaked; the wood floors were nearly rotten. He wasn’t sure it would work. “I said, ‘I’m looking for somewhere to weld — I’d burn this place down,’” he recalls telling the landlord. “And he said, ‘I can work with that.’” What’s kept Bowling here, he says only half-jokingly, is “inertia.” The thought of moving all of his art and tools was just too overwhelming.

Earlier in Bowling’s career, though, it would have been easier for him to pick up and go. He’d spent years making smaller metal fish, hammering out schools of them to sell to families decorating their beach houses or displaying them as Christian symbols on the walls of their homes. Then, as now, Bowling’s welded works of art came from found objects, many gathered on daily trips to a local scrapyard in search of steel and other useful materials. His workshop, relocated from downtown to “a giant piece of swampy land” near Pactolus, contains a collection of discarded pitchforks and shovels, golf clubs and transmission parts.

While Bowling’s graduate school thesis explored “recycling culture,” his repurposing of discarded materials is not necessarily intended to make an environmental statement. “I started working with found materials because that’s the only thing I had to work with — it was what I could find,” he says. “I’m not positive that somebody is going to want to buy a giant flower entirely made out of pitchforks, but I had all those pitchforks. It looks cool.” It’s also therapeutic. “I’m all over the place,” he says, “but making things allows me to sort of bring it all together.” 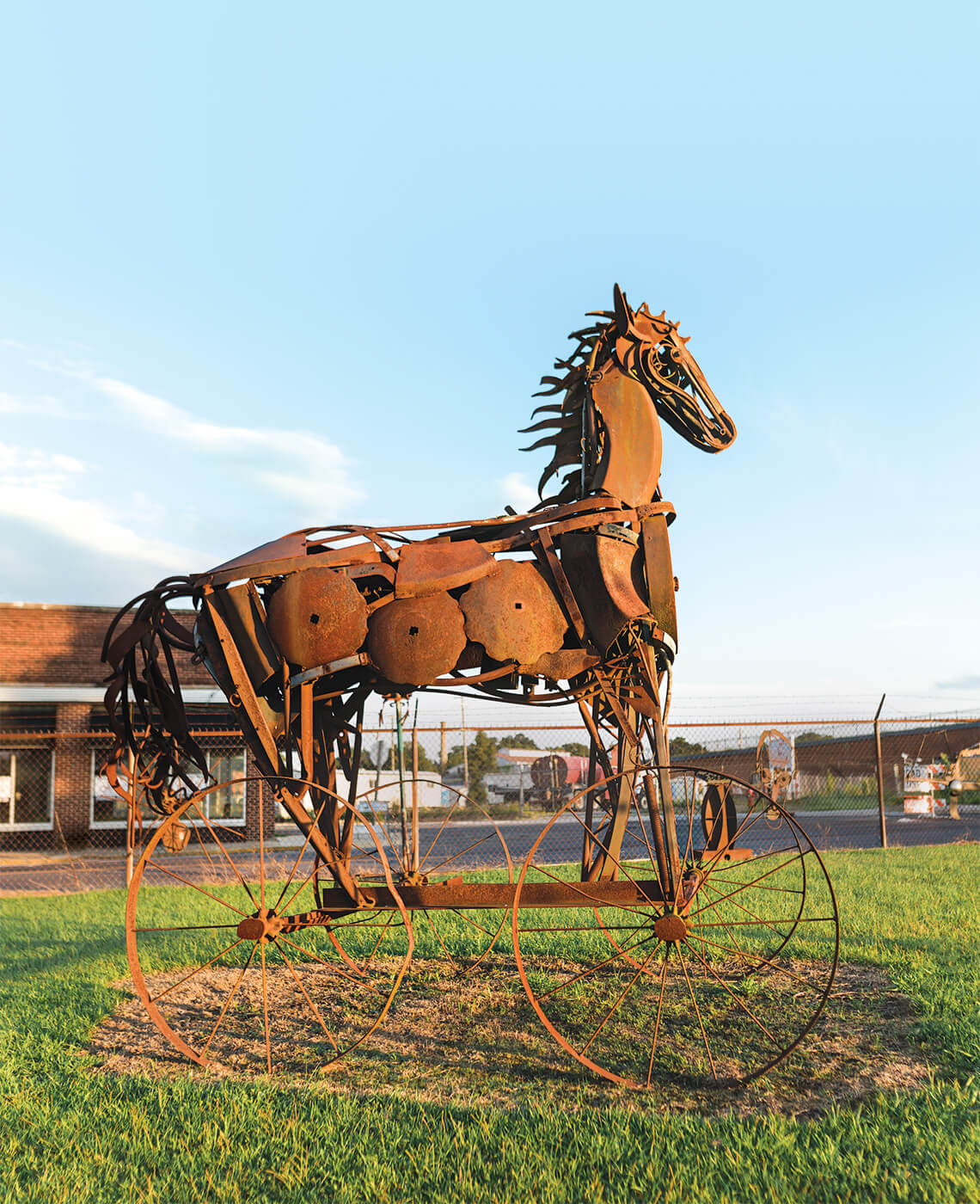 Bowling made Large Horse on Wheels, his second steel horse, in 2009. The piece stood at the entrance of his father’s farm in Kentucky for about five years before the artist trotted it back to Greenville, where it’s now parked in a vacant lot. photograph by Eric Waters

After 10 years of peddling forged fish and other works up and down the East Coast, Bowling won a competition with a trio of his horse sculptures, allowing him to meld his agrarian past with his current artistic pursuits. With a budget for an assistant, he was able to make more of the larger steel sculptures. As he worked to weld additional horses — some lowering their heads to graze, others trotting with manes that appear to blow in the wind — the steel creatures began to take off beyond Greenville, finding homes among public art displays in Fayetteville, Greensboro, Hillsborough, Rocky Mount, and Statesville.

But nowhere is the prolific nature of Bowling’s work more visible than in Greenville, where his marvels of metalwork — from a seahorse to a centaur, a donkey to Don Quixote — sometimes seem to appear overnight on unused lots, like the one along Atlantic Avenue at the former site of the Imperial tobacco warehouse.

Within the next year or so, that warehouse property is planned to become a boutique hotel and residences, meaning Bowling’s animals will be displaced. But no one should have to travel far to find his sculptures. Works of his that are currently placed throughout the center city will be part of the Emerald Loop, an urban art trail being developed around Greenville’s cultural amenities.

In addition, plans exist to corral dozens of Bowling’s sculptures from the Imperial site into a sculpture garden to ensure that his public art remains in the public eye. “Public art is a community equalizer. I think that is one of the greatest things about it,” Garriott says, adding that some of Bowling’s works, which will be situated along an extension of the Greenville Greenway, will help create a sense of place for the community. 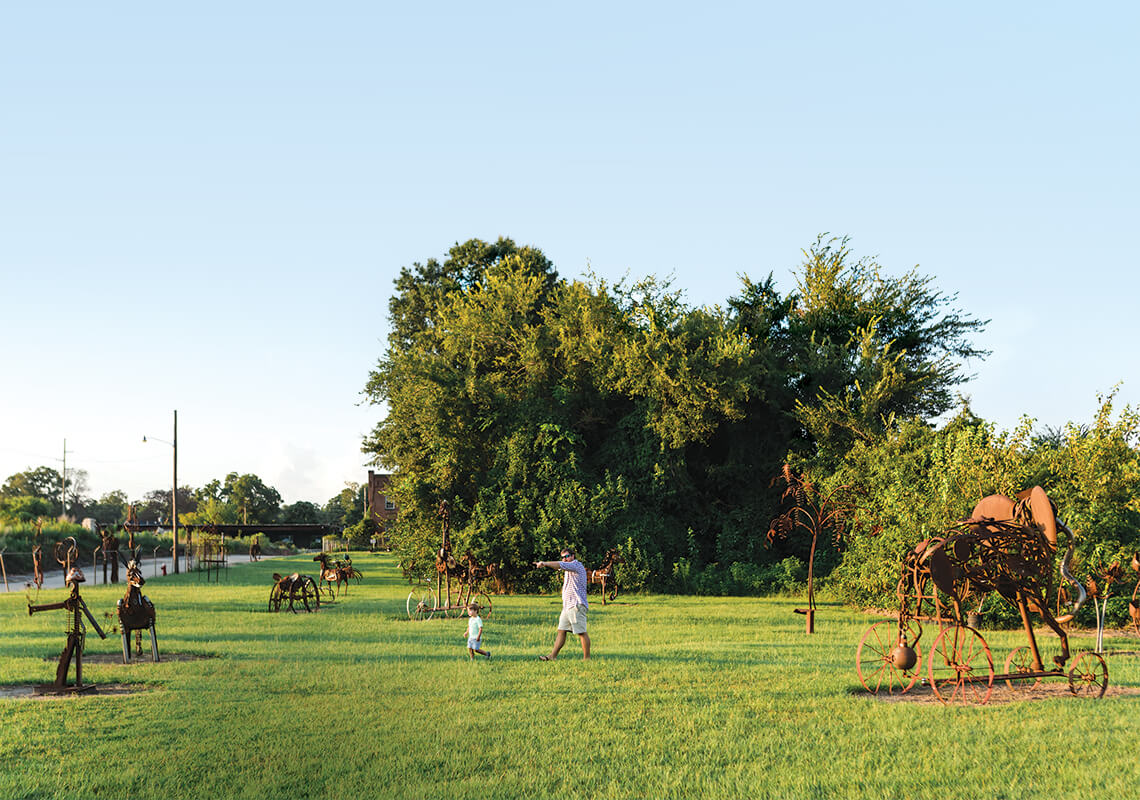 Parents love to take their kids to the grassy area off Dickinson Avenue — a block from Bowling’s old studio — to marvel at the artist’s steel horses, pigs, elephants, and other creatures. photograph by Eric Waters

Passing bike riders and dog walkers may be captivated by — and somewhat curious about — the meaning of this menagerie. The artist himself has no complicated answers. “I’m not trying to make any big statement,” Bowling says. “I remember in college, there was one art professor who would basically challenge all of the artists with the idea of, ‘How are you making the world a better place with your art?’ It’s a very real question. For some people, the purpose of their art is to educate people, and that’s awesome.” But it’s not Bowling: “ ‘Flowers are pretty’ is a perfectly acceptable purpose.”