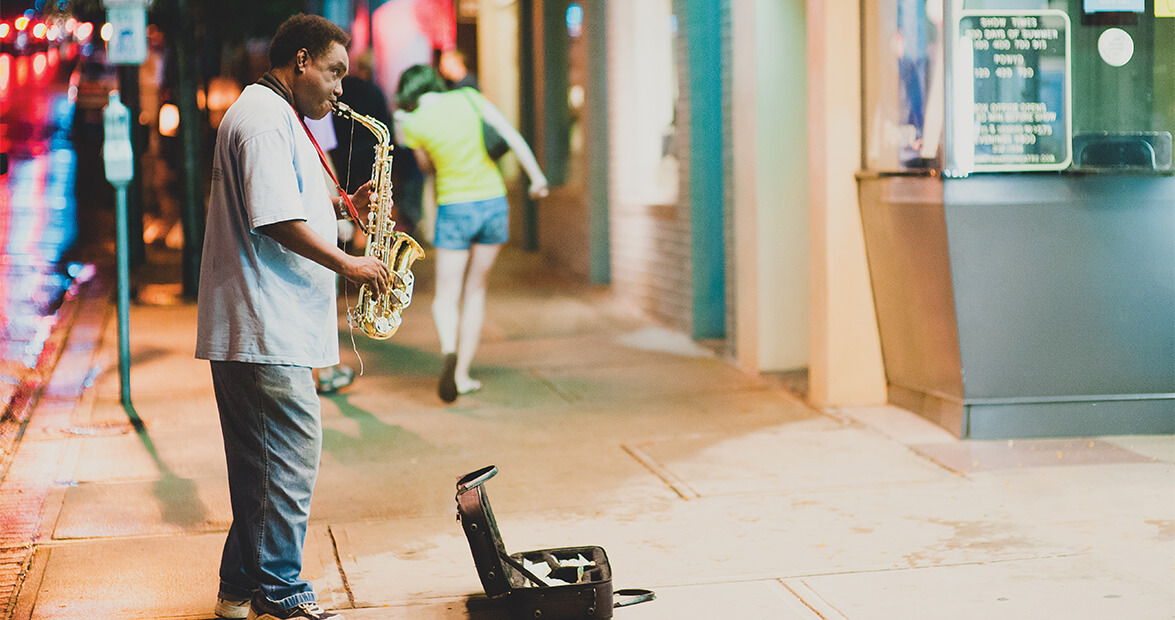 “Love Asheville,” prompts the sign behind the bar at Highland Brewing Company.

It’s hard not to.

Preschoolers in polka dots and red denim sprint across a concrete dance floor. They spin in tight circles, then stagger between nearby moms and dads.

Kids in a brewery. It’s the kind of contradiction Asheville loves to play out against an earnest indie-rock soundtrack.

There’s a good chance that visitors (unfairly) expect beer snobs at Highland Brewing  and pints of something polysyllabic and unpronounceable. They’ll find two spacious stages instead — one indoor, one out, a nod to the necessity that is live music in Asheville.

The calendar is unpretentiously earmarked for zydeco or reggae or roots rock, depending on the night. On the tasting-room stage, local groups like Sidecar Honey boast a lap steel guitar and a mandolin, a lead man from New Jersey, and a sound you can’t quite categorize.

“Just grab a beer and take my hand,” they croon.

It could be the official city song.

There’s no room to dance at the 5 Walnut Wine Bar, two always-buzzing rooms in the bass-drum heart of downtown. But you dance anyway.

Couples whirl between the maple-topped bar and salvaged-wood cocktail tables. They shimmy to hybrid sounds — jazzgrass, anyone? — in a narrow hallway outside of the bathroom.

They make inadvertent partners of neighbors and newcomers who squeeze inside, drawn by rumba or world music or something equally unanticipated.

When a table empties during the late show, someone appears to carry it away. Dancers pour like sand into a foot or two of newly opened space.

There are precision steps to an island beat, and there are heavy boots stomping in time with maracas.

The owner calls this a wine bar. The music calendar calls it a perpetual performance space.

Seven nights a week, bands line up against a creamy whole-wall mural on one side of the main room. There’s no more stage than there is dance floor.

Passersby ask their companions, “Isn’t this the place?”

“Yes,” comes the answer. “But we’ll have to go in the other door. I think a drummer’s blocking this one.”

The close quarters aren’t chasing anyone away. Maximum capacity at 5 Walnut is 75 people. The sommeliers behind the bar say the fire marshal is apt to stop by to count, because all 75 people are sure to show. They come on Wednesday for flamenco, then on Sunday for an Appalachian string band.

A crowded spot stays crowded. It tells everybody that they’re missing out on something if they don’t check it out, says Violet, a dreadlocked Ashevillian waiting outside for friends.

It will be their first time here, and she wasn’t sure how to prepare them. She told them to find Walnut Street and follow the music.

Who knows? But it’ll be the kind you can’t help but follow.

Snippets of sound curl like smoke from under the solid wooden doors that line Haywood Road.

Music whispers and whistles in this already up and still-coming strip. The melody slows your step at one window, tugs at your sleeve on the next block. Is that heavy metal? Where’s that swing tune coming from?

Isis Restaurant & Music Hall, marquee glowing, rises like a Depression-era mirage. Up the broad plank steps in front, the small hall feels as much like a church as it does a renovated 1937 theater.

With its unadorned walls and spare lighting, the upstairs at Isis is like the Blue Ridge Mountains in winter. Its beauty emerges to watchers who sit quietly enough to notice.

The lounge seats a crowd close enough to chat over small plates with performers. Requests come at the same volume as dinner conversation.

But dinner conversation silences with the first unflinching notes in this intimate attic space. Asheville sways here to refrains about whiskey and Lucky Strikes. The audience toasts to heartbreak, an old flame burning.

Fifty people can fit in the lounge of this low-ceilinged space turned singer-songwriter’s cathedral. They hold a collective breath for the last despairing sound to end its echo.

Here, the city adds a few leaves to the trees. Horns blow and Motown blares. In Asheville, it’s best to keep the dancing shoes handy.

The Grey Eagle is an invitation into Asheville’s living room, a here-before-it-was-cool corner of western North Carolina’s music city.

In this herald angel of the River Arts District, it’s tempting to tell fellow fans about the Carolina Chocolate Drops show here in 2009. How this revelation of a string band might have been better in Asheville than they were when they played the Ryman in Nashville last year.

Or about Country Music Hall of Famer Charlie Louvin that spring night in 2007.

With any luck, The Grey Eagle, its exposed rafters and PBRs (ironic or not) will help keep you from sounding so pretentious. 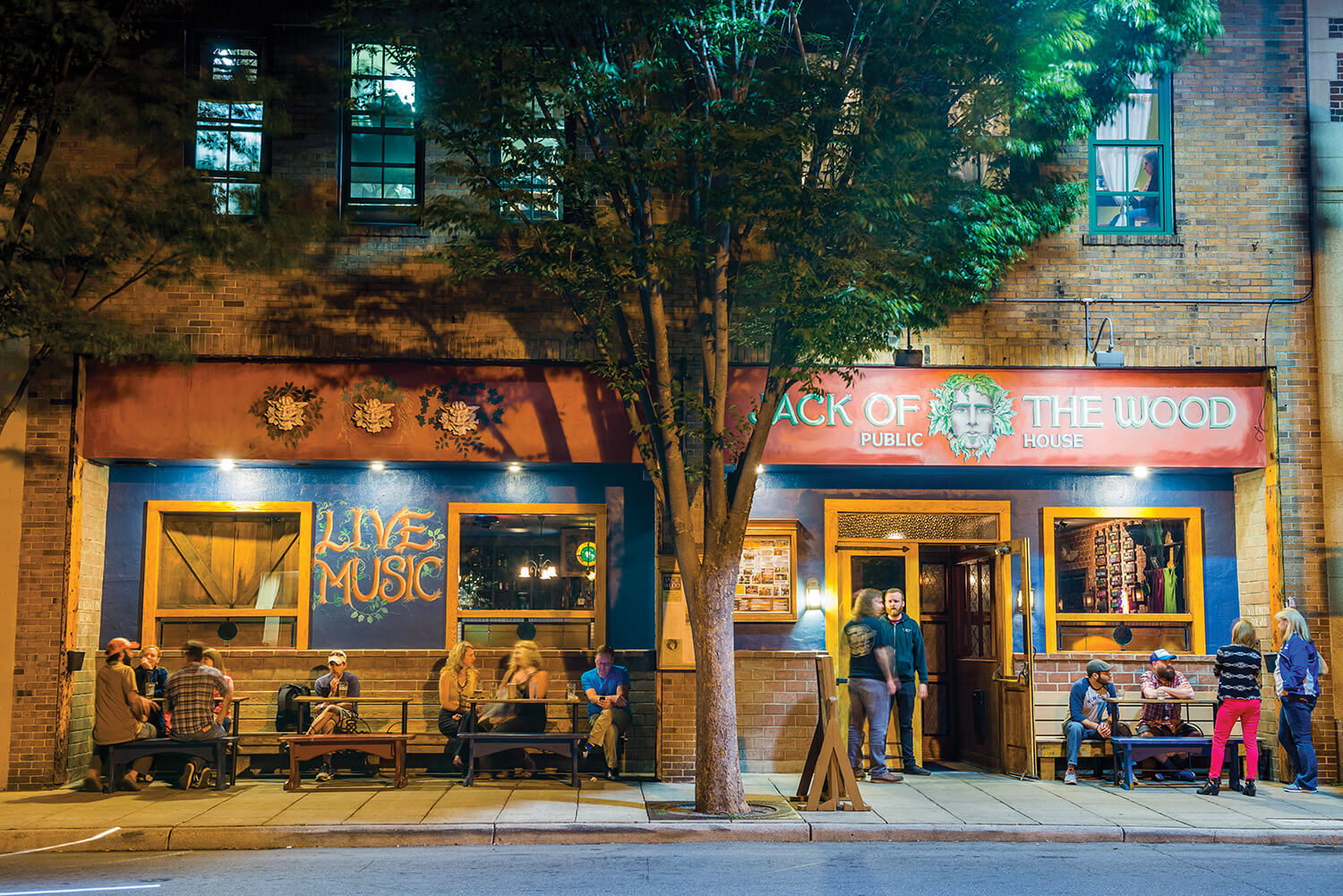 The Grey Eagle hosted bluegrass years before O Brother, Where Art Thou? introduced its first 20-something to the banjo.

Before country became pop, The Grey Eagle embraced your mama’s AM-radio twang. And this storied venue did the same thing at the same time with Celtic and blues, electric guitar and freeform, and a dozen other sorts of sound.

The borough that’s now the River Arts District, back when Grey Eagle owner Jeff Whitworth had the foresight to move in, was better known for the squatters rumored to be living in the surrounding abandoned mills than for Monday night contra dancing.

Half the charm of Asheville is the flashlight shining on what everyone else overlooks.

In the early years of The Grey Eagle, visitors could spend 20 minutes parallel parking by a chain-link fence down a narrow avenue with no streetlights. It stands as a testament to Asheville that loyal fans of live performance looked into the gloom and kept heading for The Grey Eagle’s front doors.

The city has since spruced up its riverbank. The only trouble getting to the now-less-gray Grey Eagle is recognizing it behind sidewalks and swanky landscaping.

The rafters are still exposed. The beer still comes in a can. You can still talk about that time in 2008 when Iris Dement struck you dumb with her cover of “Mama Tried.” Just make sure to store up a few new “you should’ve been there” stories. You’ll need them to impress the next crop of live-music lovers.

Asheville isn’t slick, promises Robert Greer. He’s about to take the lead for a country music revue at the downtown institution Jack of the Wood.

The city, like Greer, wants “a little grease with the beans.”

Or maybe it was greens. Asheville has no sidewalk monitor to shush the crowds.

Greer wouldn’t need to drive home his point to anyone who ever walked to Jack of the Wood — as everyone should walk there any chance they get — through nearby Pritchard Park on a warm Friday night. That’s when the free-form drummers muster to pound out a love song, written on the spot and dedicated to this town of birthday-cake buildings and gargoyle-topped monoliths. The drum circle takes over the old outdoor bus station and draws high-heeled tourists and work-booted passersby into a turbulent, percussive mix. This Asheville is a Lava soap-and-patchouli-scented patchwork.

And you aren’t finished yet.

Jack of the Wood waits around the Patton Avenue corner. Fiddles wail here, and unplugged Irish sounds can be heard at least one night every week.

The tiny corner stage has hosted the likes of Old Crow Medicine Show and sets that bordered on religious experience with the Warren Haynes Christmas Jam by Day.

Some dark evenings, the glare of pearl-snap buttons alone could just about light the place. On country revue night, there’s a signature Asheville amalgam of local strummers and pluckers, bowmen and belters of the traditional South. (Asheville loves all things local, whether singing or drinking or eating.)

A battered-and-fried Dire Straits number — the older fans can sing along from MTV-honed memory — proves that a pedal steel can improve any song.

And the carefree preschoolers crashing the dance floor in the early evening? If they had grown up over the course of one night, they could be the same lost-in-live-music pack that’s spinning across this floor. Sure, these twirls are more sophisticated, the two-steps better timed. They’ve traded polka dots for pearl snaps.

But leave it to Asheville to make unabashed dancers of us all. The city doesn’t expect its company to be too slick, either. 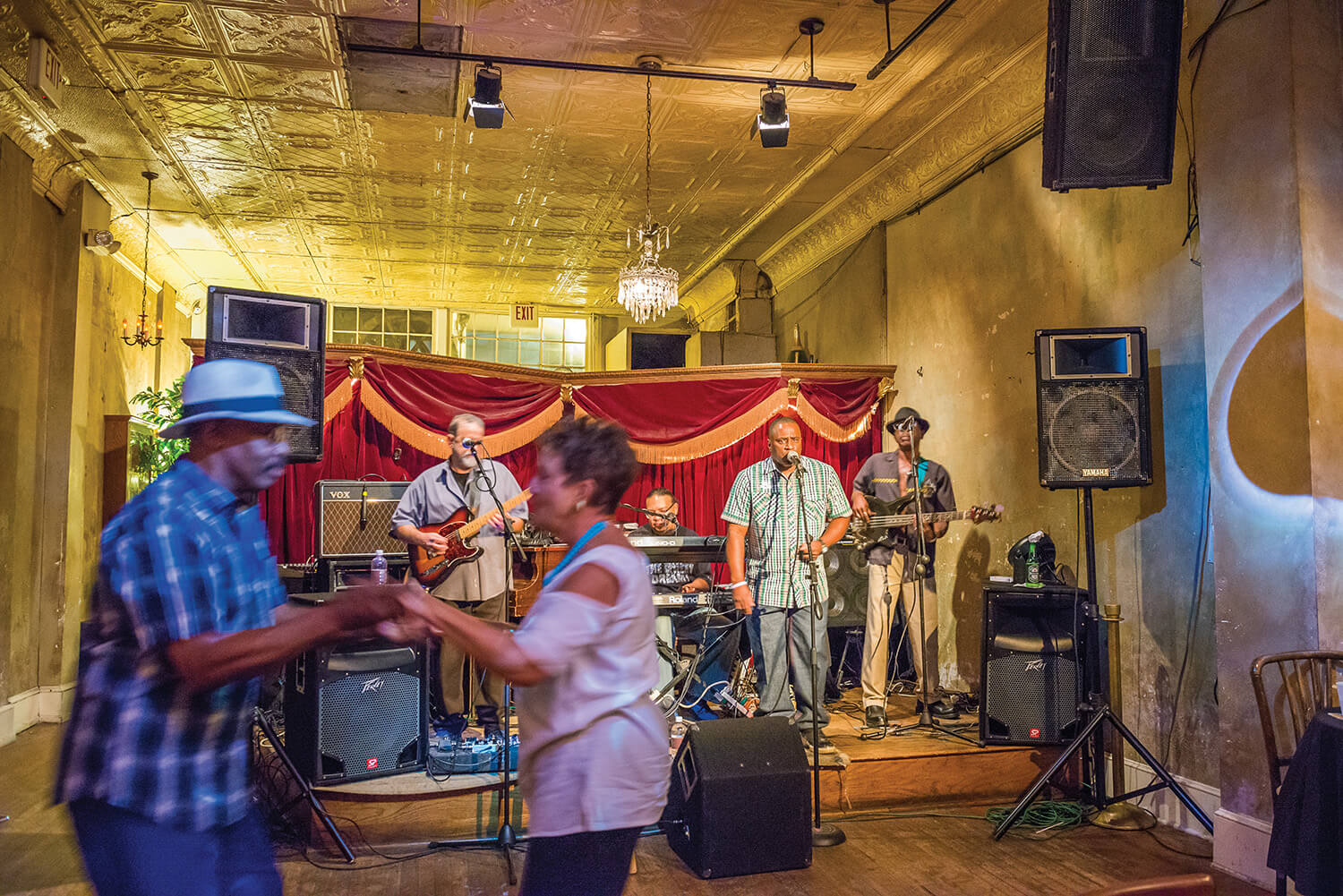 Guests duck under a discreet awning, peek inside, and think they’re seeing the whole of Tressa’s Downtown Jazz & Blues.

Tressa’s is a time machine with a blues-funk stereo, a memento of the Art Deco downtown that roared through the early 20th century under shining chandeliers and gilded mirrors.

Here, dancers and drinkers sway in light from an unexpected disco ball in the high, pressed-tin ceiling.

Guests groove to blue notes, and slide around an austere dance floor at the insistence of a plaintive harmonica.

At Tressa’s, gold fringe and burgundy velvet back the lowdown thrum of a blues duo, the moan of a jazz sax. It’s equal parts front parlor and back room.

Here, Asheville shows off the early show and late show custom the city cultivates across its myriad of small stages. It is an offering to the city’s dogged callers, the out-of-towners who come before supper but find, street after street, another rhythm, another pleading, treble-toned invitation to stay a little longer.

It is a reflection on that great Southern tradition of over-long good-byes, that ritual of lingering in doorways or on front porches for hours after the first intimation that you’d better be getting on home now. It’s late.

Then, another hour later, you’re still listening to a story about the neighbor’s new baby or the job your cousin’s wife finally broke down and found.

Or how you should really take the rest of this pie with you.

The difference is that Asheville wants to give you one more stanza, one more tune to hum on the drive down the mountain. It might be a country weeper stuck in your head, or it might be a raucous soul standard. It’s probably both.

The label you were ready to pin on the city never did stick. Asheville’s costumes change too often. The crowds move too quickly. This city is a player who won’t be typecast, and it’s also a dancer who’s saving one for you.

This story appeared in print as Asheville: Music City.