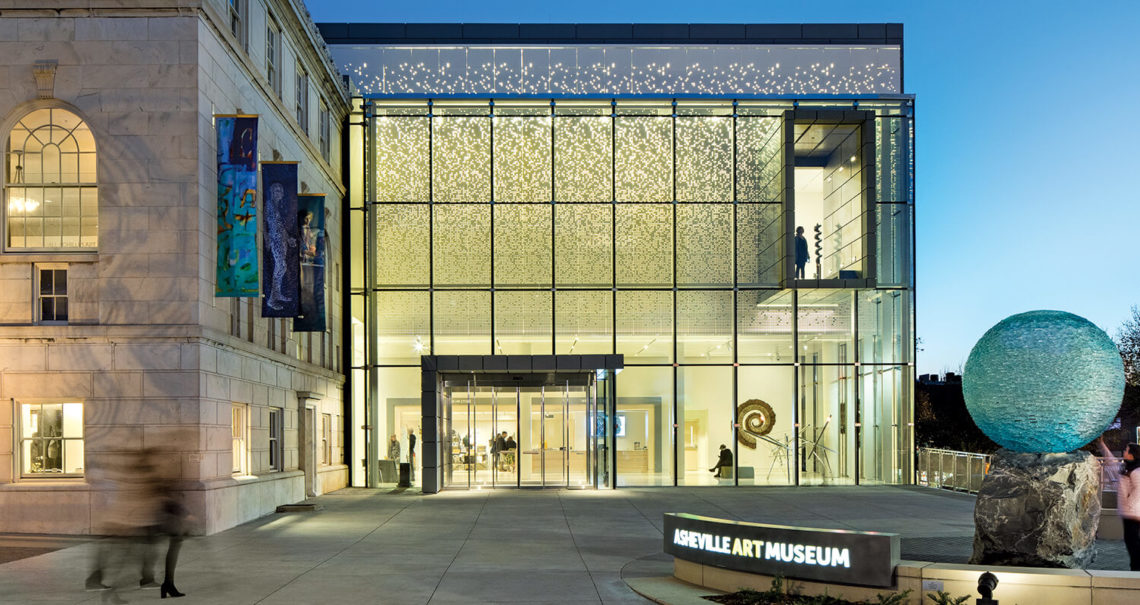 For weeks, anticipation heightened around the reopening of the Asheville Art Museum. In the middle of downtown, at Pack Square, the temporary fencing around the building was finally coming down after an extensive two-year renovation. At the unveiling — one year ago this month — a striking new landscape emerged: The restored, three-story 1926 Renaissance Revival building, pristine in white Georgia marble, now abuts a perpendicular facade of glass. Above a soaring atrium, the floating SECU Collection Hall juts out from the building’s north face, clad in perforated backlit metal, with a floor-to-ceiling window, “The Oculus,” that looks out over the city. It’s a captivating sight, especially after the sun goes down, when LED lights shine through the matrix-like pattern — a nod to the ideas of randomness once explored nearby at the trailblazing Black Mountain College.

During the day, caught from the right angle, the glass reflects its surroundings: a massive globe installation in the entry courtyard, the towering new Hotel Arras, Biltmore’s I.M. Pei-designed headquarters, and the Vance Monument, now shrouded in netting as city planners and artists collaborate on a new, inclusive pillar following Black Lives Matter demonstrations. It’s a reflective view that speaks to the dynamic changes and explosive growth that Asheville has experienced in recent decades, as well as the museum’s new place within that narrative. The reinvigorated 72-year-old institution might just be the city’s greatest cultural milestone yet. 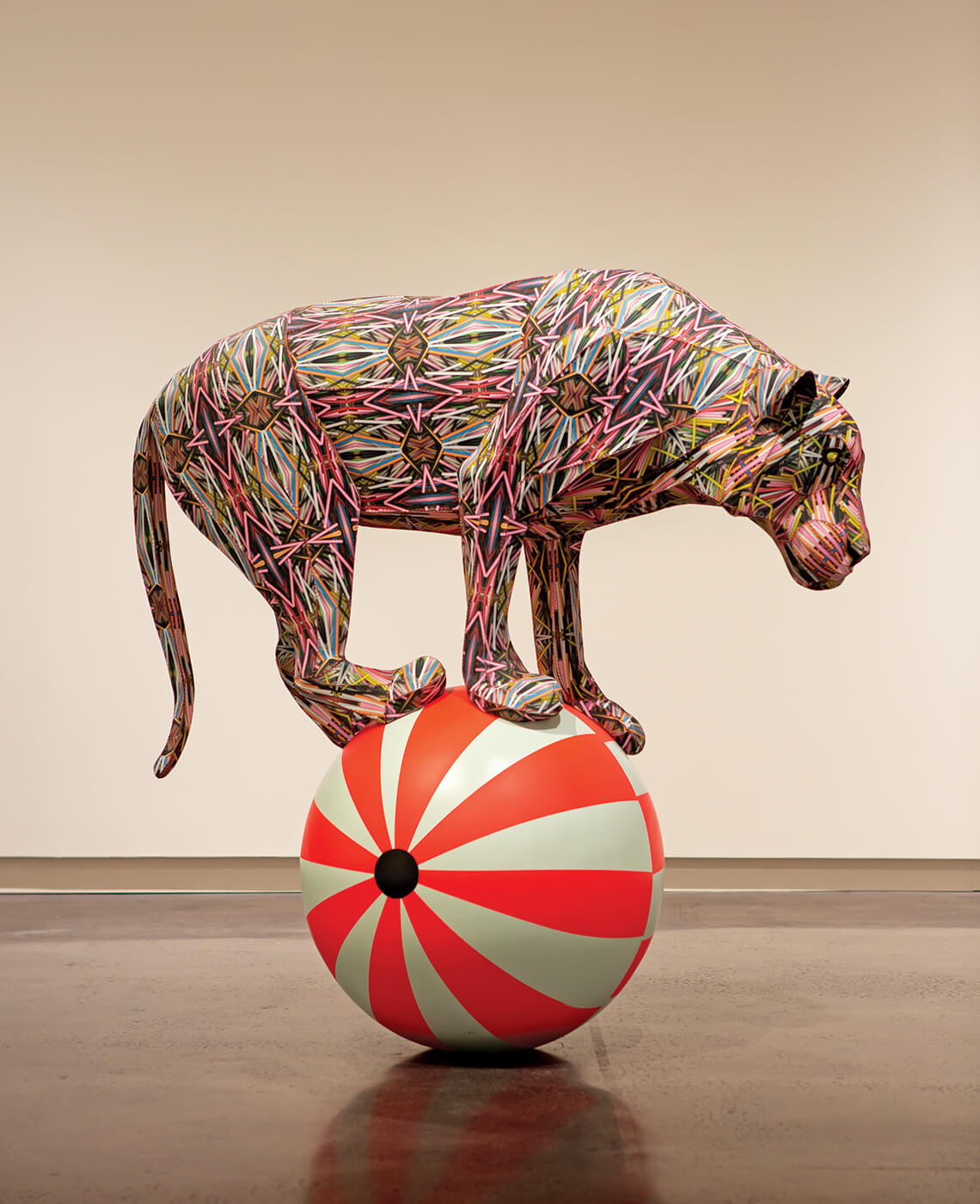 Anne Lemanski is known for her fantastical depictions of creatures great and small. In Tigris T-1, the North Carolina sculptor balanced a tiger on what looks like a giant circus ball. photograph by Tim Robison

Within this expansive, reimagined museum, the art offers viewers a look at the important creative contributions born in these mountains, framing them within the larger context of American art from the 20th and 21st centuries, as well as a small holding of relevant works from the late 19th century. This is a place to see sculptures by Spruce Pine artist Harvey Littleton, who, in the early ’60s, began sculpting glass for a purpose beyond function. And to view works by some of the great Black Mountain College alumni — artists, composers, choreographers, and architects who, to this day, are studied in halls of higher education around the world. The museum offers a chance to witness how contemporary local artists are pushing boundaries, crafting narratives that reveal what it means to be a creator in this time and place.

The new, modernized Asheville Art Museum serves as an anchor for creativity in this corner of our state, poised to bring far-reaching attention to western North Carolina’s past, present, and future artistic achievements. It’s a boon for the city that would not have been possible without enormous community support and visionary direction.

Pamela L. Myers, petite, with thick platinum hair and perceptive hazel eyes, strolls through the museum’s spacious new SECU Collection Hall, surveying the fruits of her 25 years as director. She passes a painting from about 1945 by Zelda Fitzgerald, who lived and died not far away; a wire sculpture by Black Mountain College alumna Ruth Asawa; and renderings from renowned Art Deco architect Douglas Ellington, whose indelible mark graces some of the city’s most notable buildings. These and some 5,600 more works compose the museum’s permanent collection. 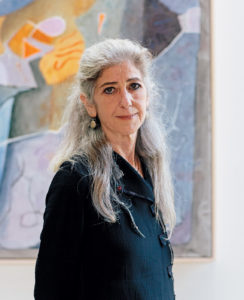 “I was really interested in how museums become centers of community and how they engage audiences,” Myers says, reflecting on what drew her away from New York City’s famed Guggenheim in 1995 to move to what was then a small bohemian enclave. “That interaction sometimes gets lost in bigger metropolitan museums.” In Asheville, she saw big potential: “The opportunity here in those years to revitalize downtown in terms of art and culture was front of mind for the board leadership of this institution, and for some incredible community activists who had a vision for what downtown would become. I felt like I could be part of that.”

Western North Carolina already had some significant arts achievements to its credit by the time Myers brought her talents to Asheville. Art and craft had been entrenched in the very fiber of southern Appalachia dating back to the early Cherokee, and Penland School of Craft had been an institution in artistry since the Great Depression, eventually pushing the boundaries of craft well into the realm of high art. The extraordinary legacy of Black Mountain College and its students and faculty — names including Albers, de Kooning, Robert Rauschenberg, and John Cage, among others — has had a significant impact on the modern art world since the experimental school’s closing in 1957. The area continued to draw first-rate potters, glass blowers, and other skilled artisans who quietly set up studios in the hills and hollows. By the mid-’90s, artists were just beginning to coalesce in what would become Asheville’s vibrant River Arts District.

The chronicle of the art museum is no less storied. It was established by a group of makers in December 1948 and housed in entrepreneur E.W. Grove’s land sale office. Over the next four decades, the growing collection of artwork moved from a downtown high-rise to a historic neighborhood home to the basement of the civic center complex, where it lived from 1976 until 1992. All the while, the caliber of art and the expectations from both artists and audience grew.

By the late ’80s, after the city had experienced some 60 years of economic depression, a communitywide effort to revitalize downtown resulted in the creation of Pack Place, a city-owned cultural complex at the center of town that encompassed several arts and science nonprofits. Among them, the art museum took up residence in the 1926 building that had previously housed the library.

Kevin Hogan was among the community of ’90s artists and activists who pushed to elevate the arts and later helped establish the River Arts District. He says that the museum’s move to Pack Square was key. “Leaders in the city and arts community realized: If we’re going to promote ourselves as an art-making destination, at the very least, we need to do our very best with the museum, to put our best foot forward,” Hogan says. 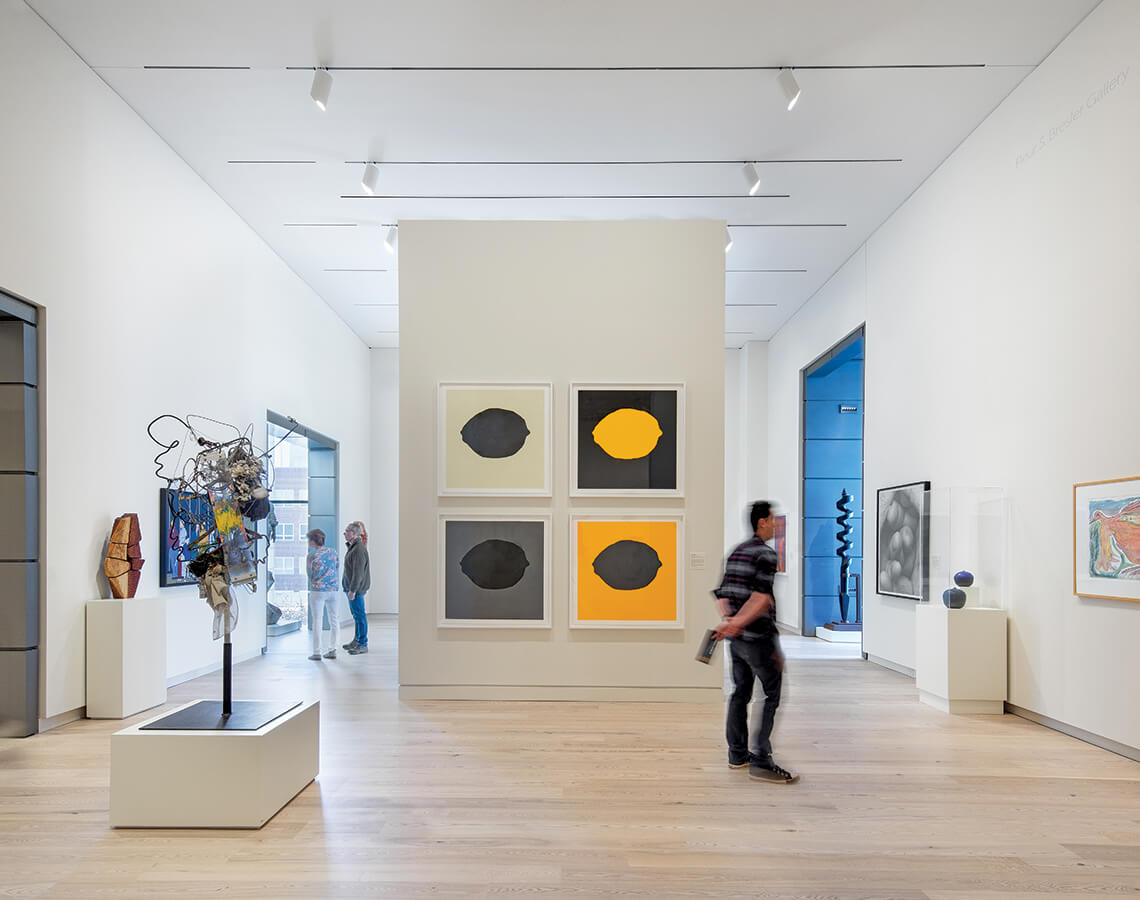 A patron reflects on artist Thornton Dial’s Lady Holds the Bird While the Bird Spreads Its Wings (far right) in the SECU Collection Hall. photograph by Sterling Stevens

The new location on Pack Square opened in 1992 and presented a firm foundation on which the museum could grow. But there were structural challenges, in both the limited 12,000-square-foot size and the lack of proper climate control. To realize the high-caliber institution that arts and civic leaders envisioned, it would take strong and knowledgeable leadership to see it through. “Pam really had a vision for the museum,” says ceramist Rob Pulleyn, who has served on the museum’s board for the past 20 years. “She wanted a museum that people would come to even if they’d never been to a museum before.”

“Pam had a vision: She wanted a museum that people would come to even if they’d never been to a museum before.”

Under Myers’s leadership, the board strengthened and began to meet the challenges of reaccreditation — the benchmark of a well-run museum. Fund-raising commenced, and momentum picked up around 2004, when the organization selected New York City-based Ennead Architects, a preeminent firm that specializes in museums, for the task at hand. Still, to achieve the final outcome, it took another 15 years, two interim expansions that allowed for formative evaluations (which took over the atrium and a second wing of the disjointed cultural complex), collaboration between countless local building and mechanical specialists, and a $24 million capital campaign.

Last November, when exclusive galas for donors and civic leaders welcomed the first visitors, not a soul was unimpressed. The restored former library building now holds staff offices, the museum’s extensive research repository, and educational spaces for meetings and programming — and it’s full of art. The SECU Collection Hall, cradled at the building’s core, houses curated exhibits from the museum’s stockpile. One other wing, spanning three levels, contains two spacious exhibition halls for collaborative and traveling displays — something not previously possible at the current scale — plus auxiliary galleries and expanded, state-of-the-art storage. There’s even an interactive maker space for the littlest of creators as well as a rooftop café and sculpture terrace.

The exhibits — curated by Myers, her team, and sometimes guests — are as innovative and thought-provoking as one expects from a premier art institution. They offer a chance to ponder or simply enjoy the interplay between, say, Andy Warhol’s Silver Clouds and Black Mountain College alum Merce Cunningham’s 1968 RainForest video of dancers amid the same metallic floating pillows. Or to consider the parallels between designer Maya Lin’s Pin River–French Broad River displayed opposite Wesley Clark’s found-object sculpture My Big Black America — one presenting a symbol that connects the region, the other a statement on strife and unity among Black Americans. 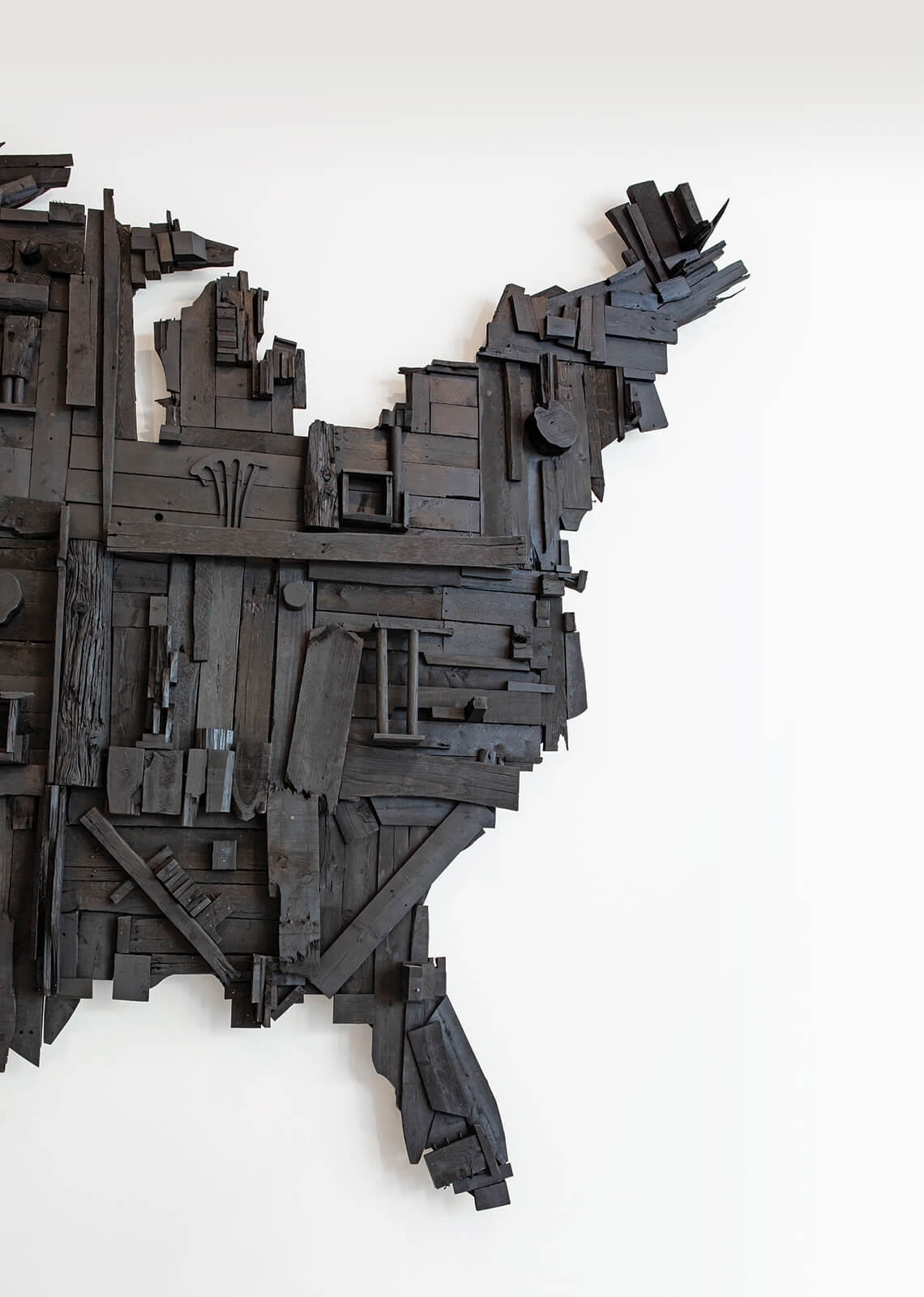 My Big Black America — a wall-size piece made by staining and spray-painting new and old woods to suggest centuries of toil — is artist Wesley Clark’s tribute to the election of America’s first Black president, Barack Obama. photograph by Sterling Stevens

“We have a specific interest in that intersection of the broader developments in American aesthetics and the developments and contributions of western North Carolina, and the cross-influencing that has happened since the 19th century,” Myers says.

Looking toward the city’s future as a growing cultural mecca, the museum, fittingly, opened with an exhibit that represented the region’s present artistic achievements — and putting it together was no small feat. Noted Brooklyn-based guest curator Jason Andrew and staff curators researched more than 700 regional artists, not just considering well-known makers, but also uncovering under-recognized and emerging artists through dozens of studio visits and an open call. The result: “Appalachia Now!” showcased 50 contemporary creators from across southern Appalachia working in diverse disciplines, each piece representing the maker’s unique personal, political, or societal perspective from being rooted to the here and now.

For visitors, it was a chance to discover the individual experiences that make this part of the world so unique. And for the museum, it was a great place to start a conversation about how the next century of artists from the mountains of North Carolina might continue to shape creative expression in America.