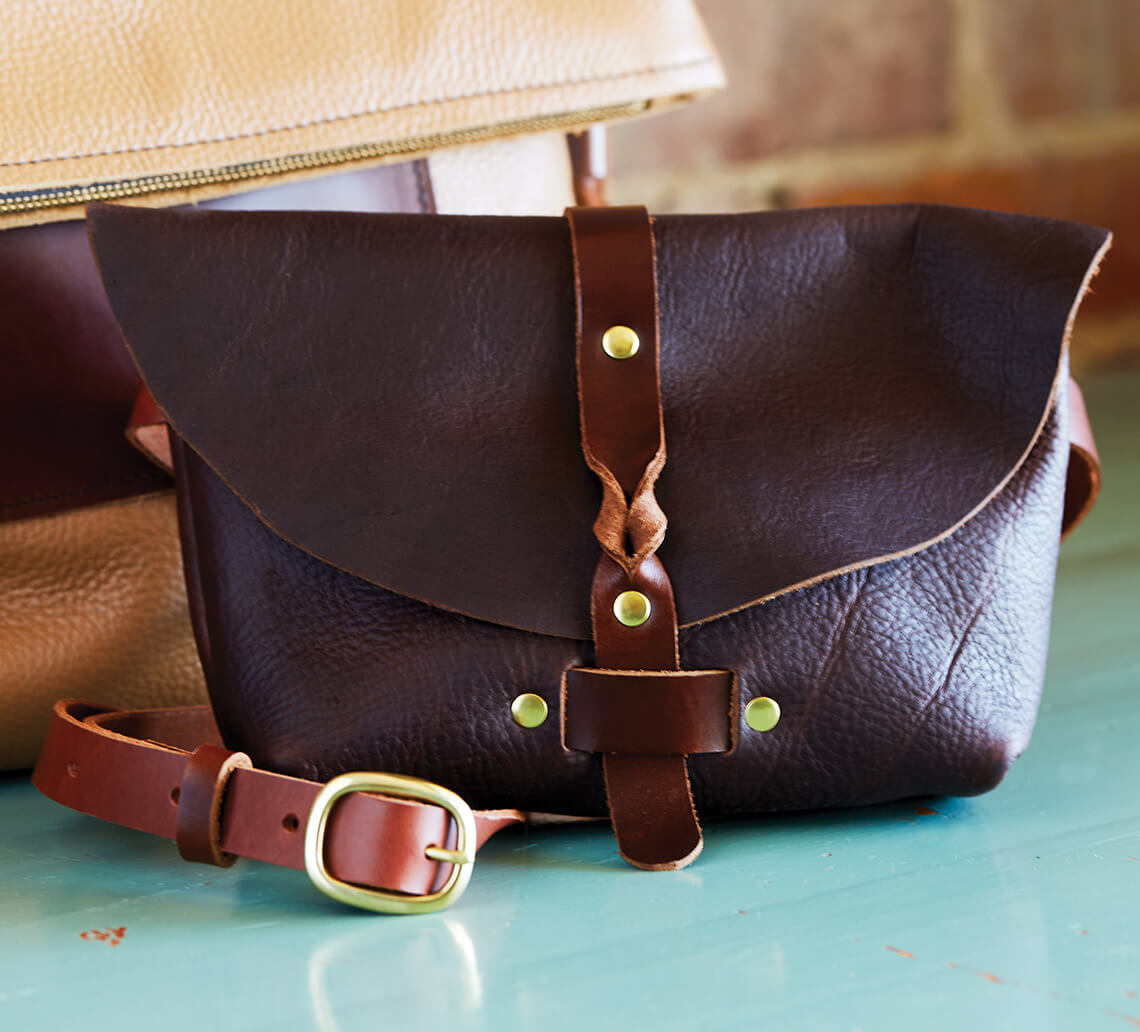 Julia Greenwood was sitting on the living room floor in her small apartment in Saxapahaw when she decided she needed a change. Her father had died two weeks prior, and she was determined to channel her grief into creativity. Over the next few days, the self-taught seamstress used a cutting board, kitchen scissors, and a 10-year-old box of upholstered leather to make a simple brown purse. “It helped me with the healing process,” she says. “I never expected anything to happen, but before I knew it, people saw the purse and started commissioning me to make their own bags.” Greenwood founded Milestone Bag Co. in 2011, and almost nine years later, she moved her business to a studio in downtown Siler City. Since launching her first design, The Sierra Tote — a 13-inch-tall bag outfitted with fringe and deerskin leather straps — she’s applied her creativity to many leather accessories, from handbags in shades of brown and black to foldover bags that can function as a travel bag, computer bag, and backpack. “With leatherwork,” she says, “the possibilities are endless.” 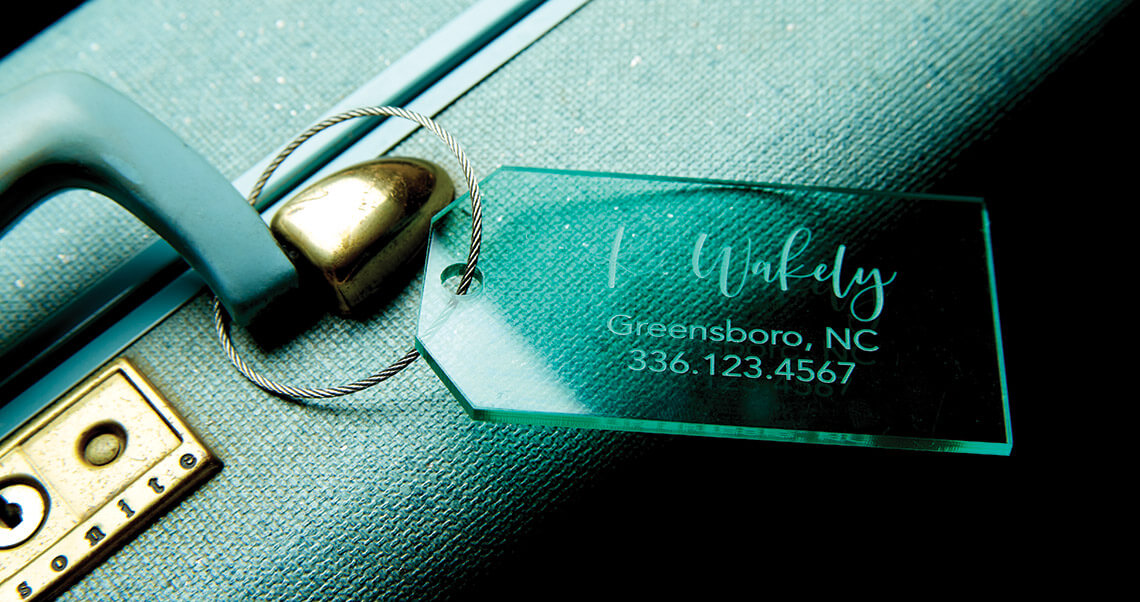 Colontonio added laser-engraved luggage tags to her inventory after designing this four-inch, transparent green one for her mother three years ago. photograph by Matt Hulsman

When Carolyn Colontonio’s mother told her that she wanted a new luggage tag, the artist didn’t buy her one from the store. Instead, she bought a laser-engraving machine to make her mom a personalized tag. Colontonio, who worked as a teacher for 14 years, had begun running Shelter Island Paper from her home in 2011 after receiving frequent requests from colleagues to create baby shower invitations, digital prints, and home decor pieces with inspirational quotes. Colontonio added laser-engraved luggage tags to her inventory after designing the four-inch, transparent green one for her mother three years ago. Now, Shelter Island Paper features luggage tags in more than 17 different hues. Of all her luggage tag styles, whether they’re made with rustic wood or glossy acrylic, Colontonio says that the original — which still brings a justifiably proud smile to her mom’s face at baggage claim — is her best seller. 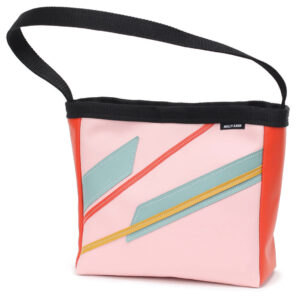 Holly Aiken’s Coupe bag is customizable online — just pick a pattern and the colors you like. Photography courtesy of Holly Aiken

By 8 years old, Holly Aiken was used to the sharp hum of a sewing machine. She heard the sound nearly every day at her parents’ clothing manufacturing facility, Patsy Aiken Designs, in Raleigh, where simple strands of cotton were transformed into colorful garments for children. “I’d always go to their warehouse at night and after school,” she says. “It’s where I first learned how to sew and found my love for design.”

Growing up around textile machinery inspired Aiken to study art at North Carolina State University’s School of Design. After spending five years sewing and selling bags to friends and local shops, she decided to establish a retail store in 2004. Many of her designs, like the Coupe — a 10-inch-tall bag with die-cut geometric patterns — are influenced by the graphic design courses she took at NC State. Since relocating to Wilmington in 2008, Aiken has expanded her line to include an array of customizable accessories, including luggage tags in vibrant shades of green, red, yellow, and blue; stylish keychains; and, of course, an ever-evolving assortment of bags. When it comes to carrying on her parents’ design legacy, she says, “I can’t imagine doing anything different.” 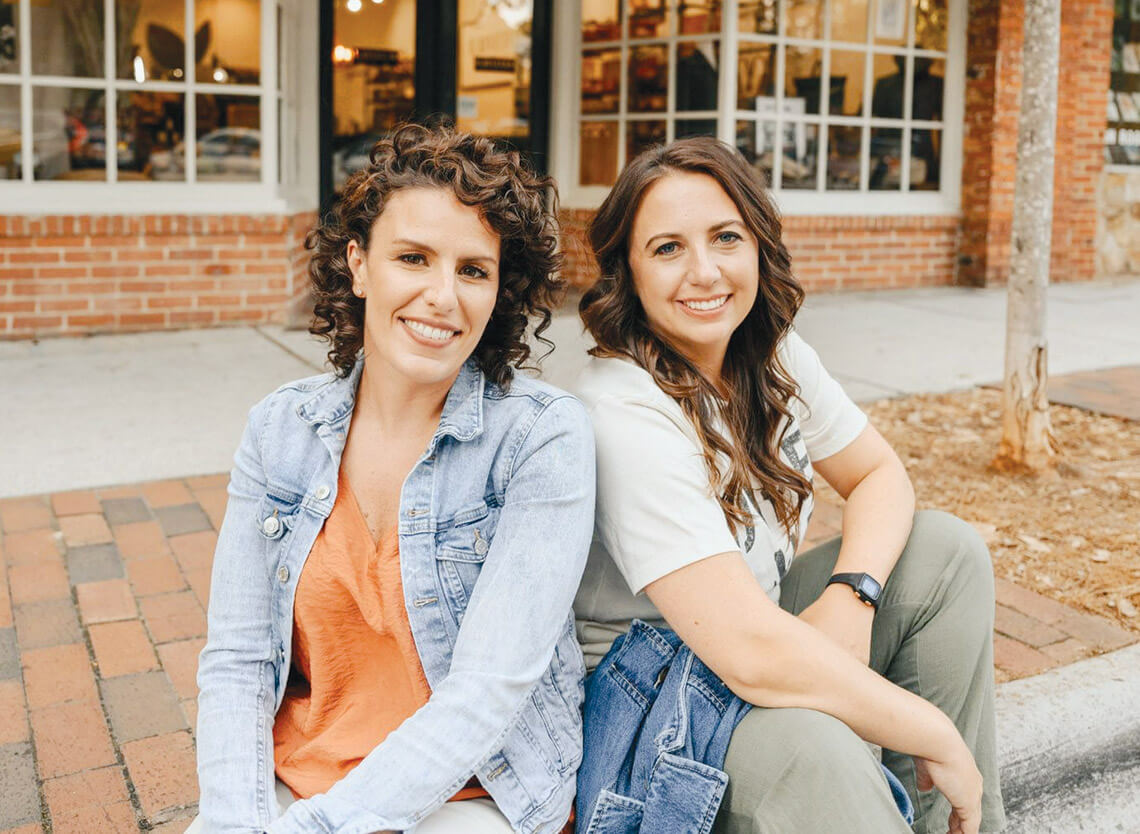 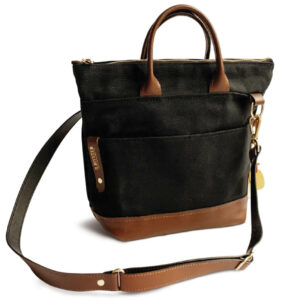 Rows of canvas-and-leather handbags in neutral tones surround Cameron Cruse and Lisa Bradley’s flagship store in Southern Pines. As they stroll past their collection of bags, home decor, and jewelry — each design named after notable women in history — the military spouses are reminded of the mission that motivated them to start their business a decade ago. “Military spouses have to move every few years, which makes it difficult to secure jobs of their own,’’ Cruse says. Inspired by World War II cultural icon Rosie the Riveter, Bradley and Cruse started R. Riveter, a business that creates mobile, flexible income for military spouses by contracting them to make handbags using surplus military fabrics. After releasing R. Riveter’s signature 12-inch-tall, canvas-and-leather Otto bag — and scoring an investment from Shark Tank billionaire Mark Cuban — the business that started in Cruse’s attic in 2011 grew substantially. The duo has since contracted a team of more than 40 military spouses, working in 15 states to help make their products. Each R. Riveter bag is hand-stamped with a number that represents the military spouse who made it and is dedicated to generations of military families.