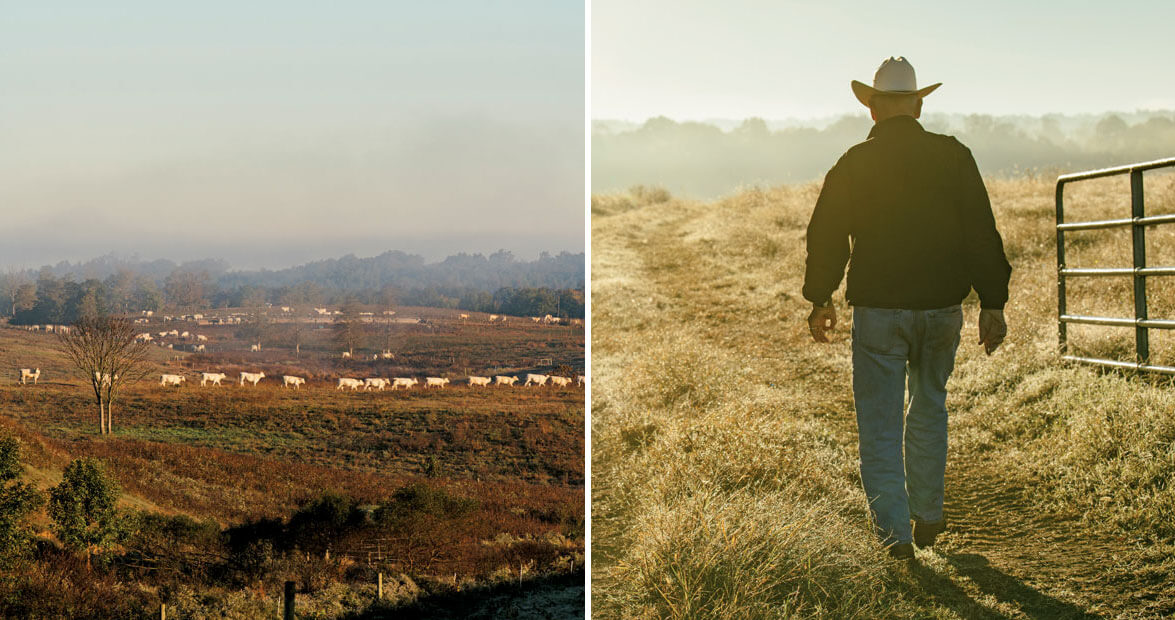 V. Mac Baldwin is a large man with white hair, metal-rimmed bifocals, a white cowboy hat, black suspenders, and a collared shirt tucked into his jeans. He carries a copy of the New Testament in his shirt pocket. As he drives around his farm in Caswell County — a wide-open expanse of pastures bounded by electric fences and dirt roads that run along the undulating hills — he talks about his cows, mostly. They’re white. Charolais. Originally from France. Leaner than Black Angus. V. Mac controls the whole process — from breeding to selling them — top to bottom. He breeds them. Raises them. Finishes them. Normally, those three steps are split up among different farmers. V. Mac does it all so that he can answer this question: Where did this beef come from? A supermarket butcher can’t tell you in any great detail. V. Mac can.

He explains most of this while driving down the dusty roads of his farm at an idling pace. But when he really gets into a story, he has to bring his well-worn Toyota SUV to a full stop.

“I was on a business trip to Columbus, Ohio,” he says, tires still bumping along at a gentle pace. This, he says, was in the late 1970s, when he was 36, back before he bought this farm. At 3 a.m., the phone in his hotel room rang. “You need to come home,” his wife, Peggy, told him. Their son Craig was sick. An ambulance was coming to take him to UNC Hospital. His kidneys weren’t working. Peggy, a nurse, knew how bad the situation was. 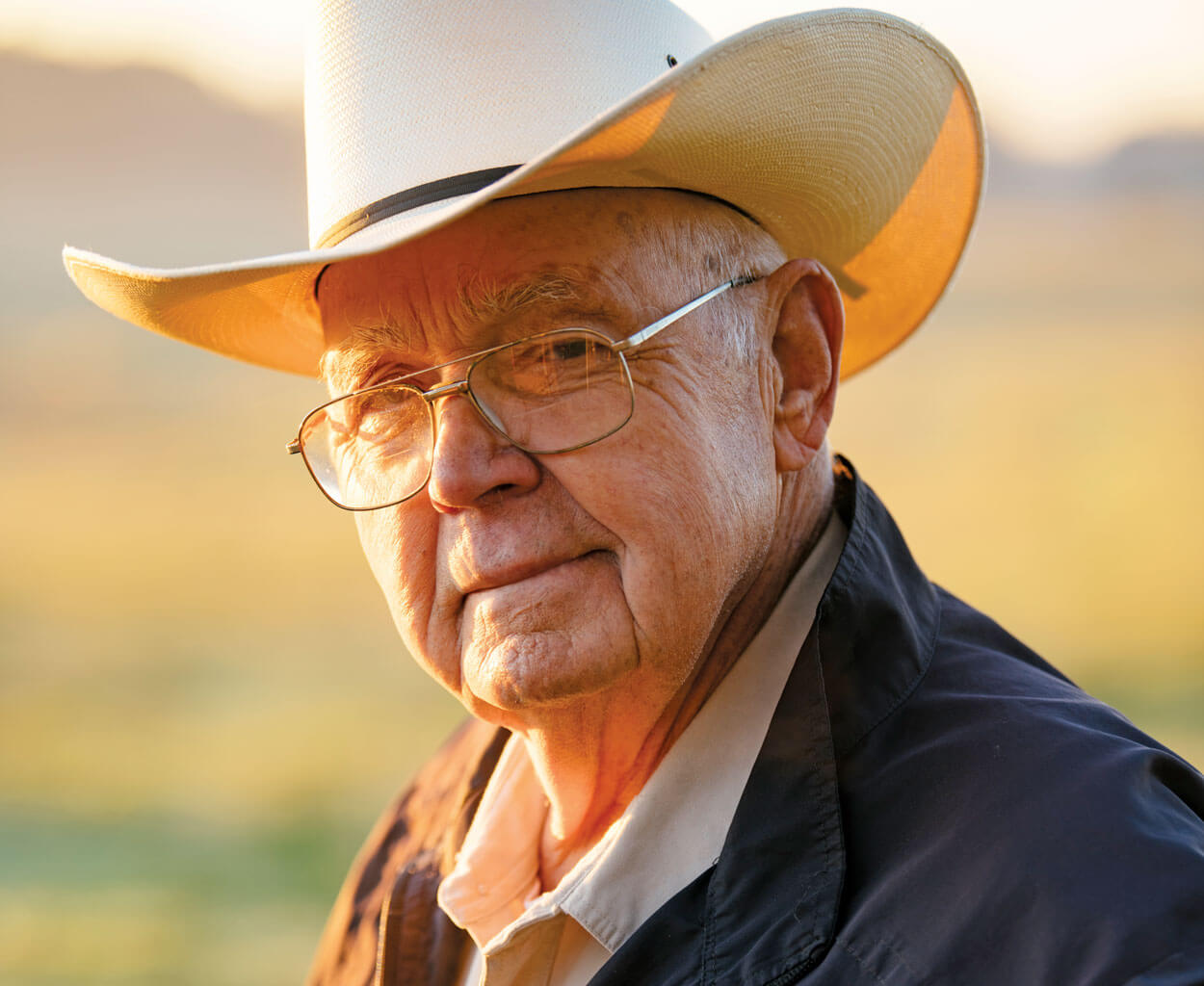 V. Mac Baldwin has been a farmer for decades. He first raised a calf at age 10 on a small piece of land in Durham. photograph by Andrew Kornylak

The Toyota slows down.

“I went to the Eastern Airlines terminal there in Columbus,” he says, foot hovering over the brake. The airport was mostly empty. He noticed a guy wearing a big overcoat and a felt hat to ward off the Ohio winter. The man was reading a pocket copy of the New Testament. They made eye contact. “Hello, friend,” the man said. “Is there something wrong?”

V. Mac told him about Craig. On the flight back to North Carolina, they started talking about their lives. V. Mac felt that he couldn’t get things done the way he wanted to. That he was being held back. That he shouldn’t feel this way. He was an elder in his Presbyterian church. Sang in the choir. The man, a retired federal judge, didn’t seem too impressed. He asked V. Mac if he could share his opinion of the situation. “You know a lot about Jesus,” the judge said. “But you don’t know him.”

“It wasn’t long after that this farm came up for sale,” he says. “So we’re living our dream.”

The Toyota starts rolling again. V. Mac is silent for a few moments, then looks out toward a muddy field. “So, um, the project this year is to get these 90 acres in grass.”

“It’s been said that I hate a tree,” V. Mac says, chuckling. “I don’t hate a tree. It just gets in my way when I’m trying to grow some grass, you know?” Once the land is cleared, it’s great for cows. There’s plenty of rain and fertile soil, and that leads to good grass. If you want to be in the beef business in this state, you need good grass.

He breeds them. Raises them. Finishes them. V. Mac does it all.

North Carolina is not a beef state. For one thing, there isn’t enough open land. That requires clearing trees, which takes time, money, and a consistent, grueling effort. The Midwest, the Great Plains, and Texas, with their naturally wide-open expanses, are all turnkey ready for cattle. All of those areas are set up for large-scale beef operations because they’re also close to plenty of grain.

“There’s no feed yards in North Carolina,” V. Mac says. “We are a grain-deficient state. We don’t produce enough grain to feed our chickens and hogs.” Even so, it’s far more economical to bring in the smaller amounts of feed you need to raise chickens or hogs than the huge amounts for grain-guzzling cows. The result: This state is the second-largest hog farming state in the country, behind Iowa. It’s in the top five for chickens. But only about 1 percent of our nation’s beef cows are raised in North Carolina.

Still, V. Mac has always wanted to be in the beef business. As a child, he had a calf of his own. This was on his grandfather’s old tobacco farm in Durham. V. Mac’s parents thought the calf thing was just a phase, so they bought him one, and, at age 10, he staked the calf up in his yard, like a pet. Took care of it. He later worked at a grocery store, where the manager let V. Mac take home unsold produce to feed to his cow. 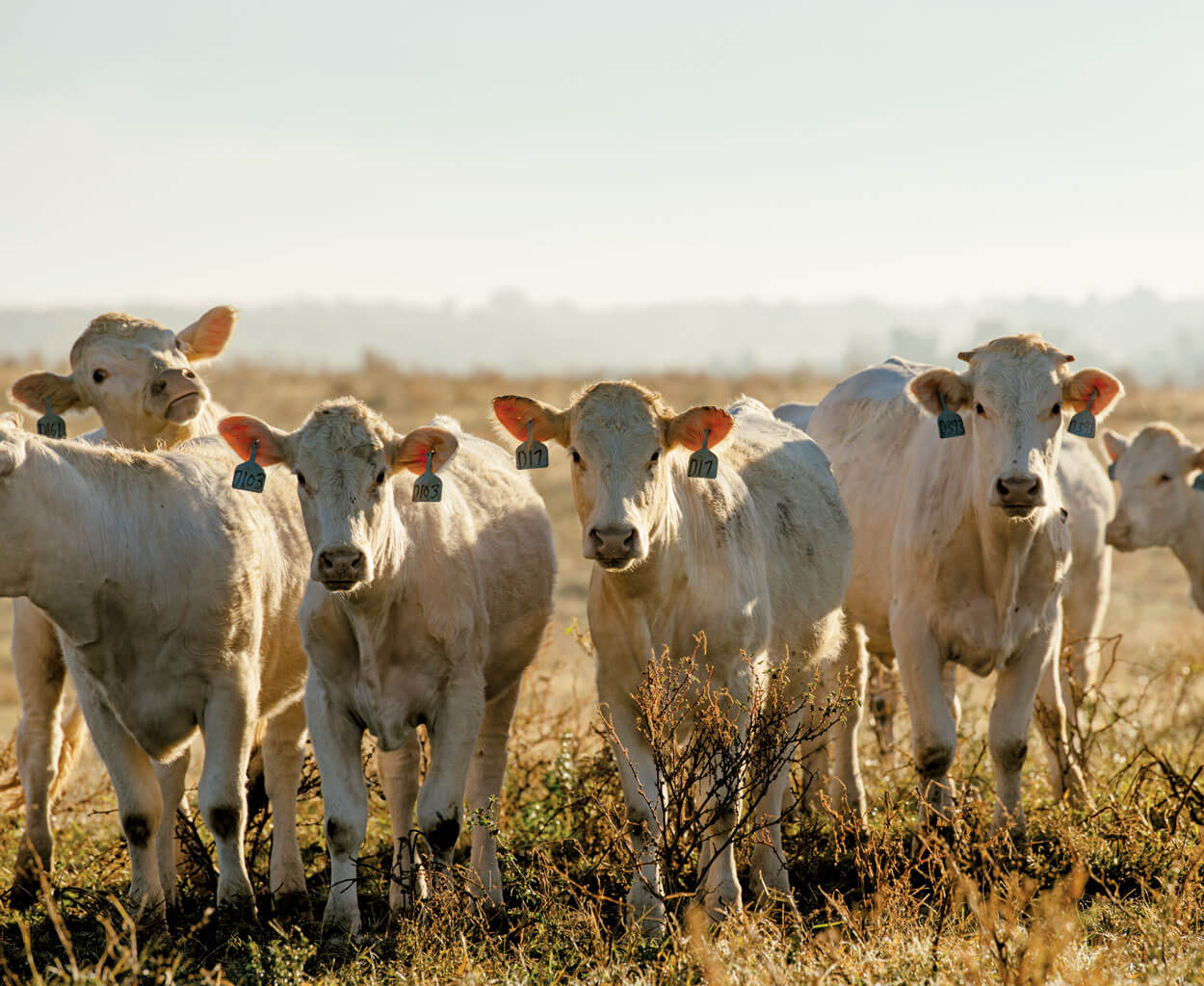 Charolais cows originally came from France, but they’ve been raised in the United States since 1936. They’re smaller than their Black Angus counterparts, and they have less fat. photograph by Andrew Kornylak

He’s never quite shaken his fondness for livestock. Out of high school, he went to work for the phone company, then joined the Navy. Saw the world. He came back, enrolled at North Carolina State University, and majored in electrical engineering. He didn’t take an ag degree because, “I didn’t come off the farm. I would’ve been in a class with boys that had family farms, and had generations of farms behind them, and that sort of thing,” he says. “And I said, ‘No way can I compete with those guys.’ But I could compete with them with the science and mathematics.”

After college, V. Mac had a career working for Lucent and Bell Labs. But he always wanted to be a farmer.

He slows the SUV on the back side of his property, far away from the home that he shares with Peggy and the converted garage that now serves as a store. “I’ll tell you a little story,” he says as he stops the Toyota: Back in 1981, he was still living in Burlington with Peggy. He’d been raising some Charolais on her family’s land for more than a decade, but he wanted more land. One day, a real-estate agent called. I’ve got something, he told V. Mac. They all drove to the property for a look.

That was a big moment in his life, V. Mac says. The SUV starts moving again.

V. Mac and Peggy loved the land, but they weren’t sure if they could afford it. But as V. Mac stood there, on that parcel just outside of Yanceyville, he saw an apple orchard and cornfields. He closed his eyes. When he opened them, he imagined green hills and white cows. So he bought the farm. At age 40.

Cows are his business, but grass is his muse. “I planted my first fescue when I was 16 years old,” he says. “It’s still there.” North Carolina is squarely in the “Fescue Belt.” V. Mac is not a fescue fan, though, mostly because the most common variety puts out seeds in the summertime that get covered in a fungus that causes problems for cows. For now, his cows eat stuff that he has to plant annually — rye and crimson clover — but he’s changing his mind thanks to a fescue variety that fights off the fungus. You plant this stuff, V. Mac says, and you don’t need to replant again. Ever. “So there’s a movement started now across the Fescue Belt to change this grass. It’s gonna be billions of dollars [for farmers] to do that. Billions,” he says. “We just started doing this a couple of years ago. Ourselves.”

“We knew we wanted to farm someday. You can’t have a family farm without a family.”

Delving deep into grass varieties and genetics brings out the engineer in him. “Engineers have a mind-set, I think, to deal in systems,” he says. A farm is a network of individual systems: the cows and the grass, the tree clearing and the breeding. The chicken houses that generate enough revenue to expand and enough manure to fertilize. The high demand for Baldwin Beef at the Carrboro Farmers Market. The deal that puts his meat on the shelves at Whole Foods. A farm is a complicated system. But, V. Mac says, “the more parameters an engineer has got on his project, the happier he is.”

And thus, V. Mac is happy, even though he’s planning for a future that he’ll never see. “A ranch is something you wish your granddaddy started,” he says. “It takes so long to get it rolling. It’s like a locomotive. But once you get it moving, you’ve got something going, you know?” He and Peggy still own the farm, but Craig runs it now. “Peggy and I knew we wanted to farm someday. You can’t have a family farm without a family,” he says. Someday, Craig will own this land. For now, he deals with the day-to-day stuff: the trucks, the workers, clearing the hillsides. V. Mac is retired. “I do what I want to do,” he says. He’ll get on some heavy machinery now and then. That’s fun. But he’s set all of this up to outlast him. This land isn’t his, he says. He’s a temporary caretaker. He keeps insisting on that. 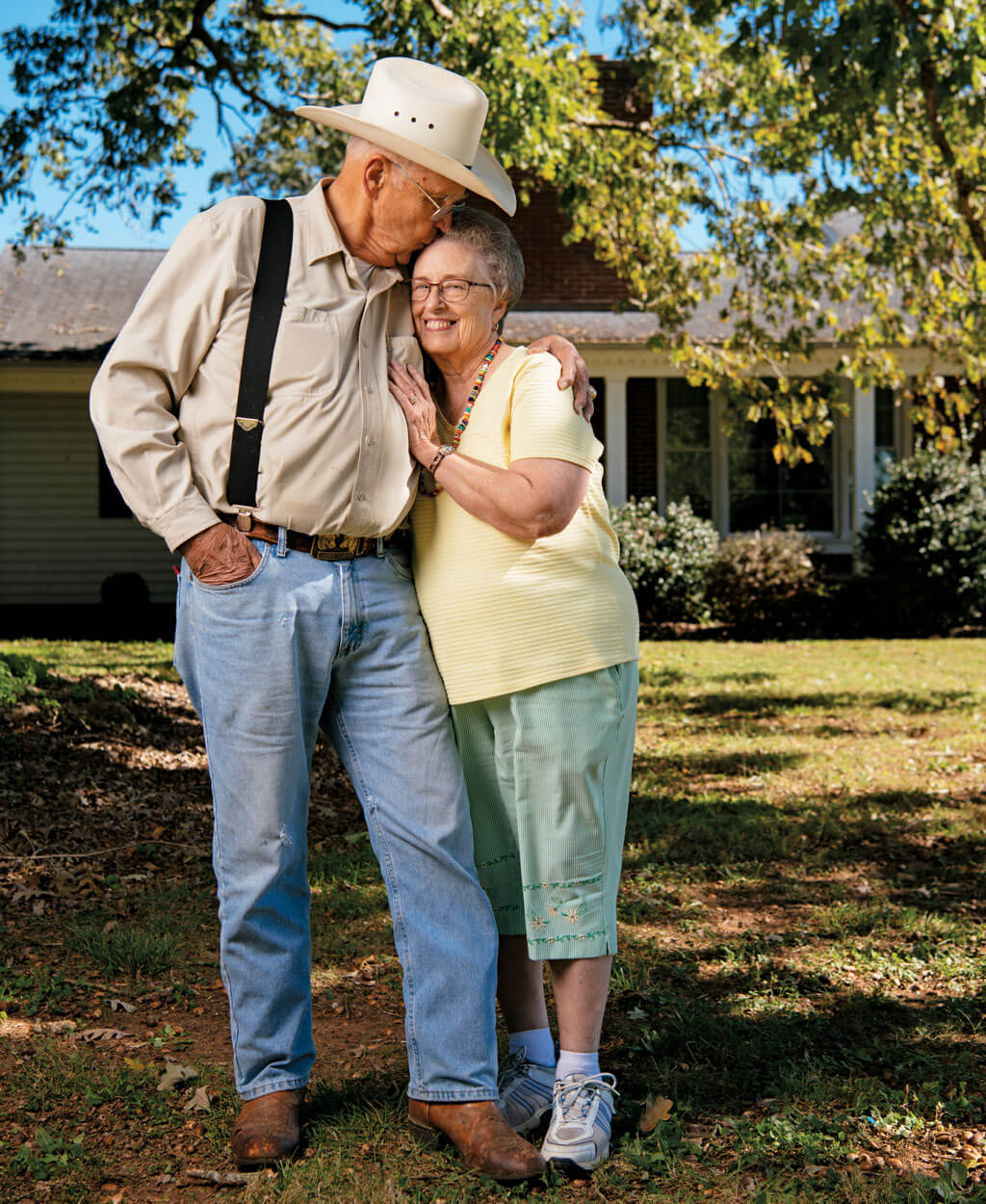 V. Mac and Peggy bought their farm in Caswell County in 1981. Their son Craig now runs the daily operations, but V. Mac remains the visionary. photograph by Andrew Kornylak

V. Mac runs his SUV down another dirt road, kicking up dust between rows of barbed wire, eking past the occasional Charolais that’s on the wrong side of the fence. Steadily, he has opened up more land, buying a few dozen acres at a time over the past quarter-century, and he now has some 1,200 acres. There’s still more land to come. At the back of his property, he stops the Toyota in front of some white cows. They all stop grazing and raise their heads to stare at him.

V. Mac gestures out of his window across an open field, toward a gently sloping hill. “This farm lies in front of that little mountain over there,” he says. “There’s a creek between them. One day, I expect to see some cattle on that.” Then he realizes how far away it really is. “Maybe not me,” he says. “Maybe my children.”

The hill is still covered in trees. The fence at the edge of the pasture stops far short of the little mountain. V. Mac can still close his eyes and envision green hills with white cows. For now, he eases up on the brake and starts moving again, slowly — deliberately — forward.