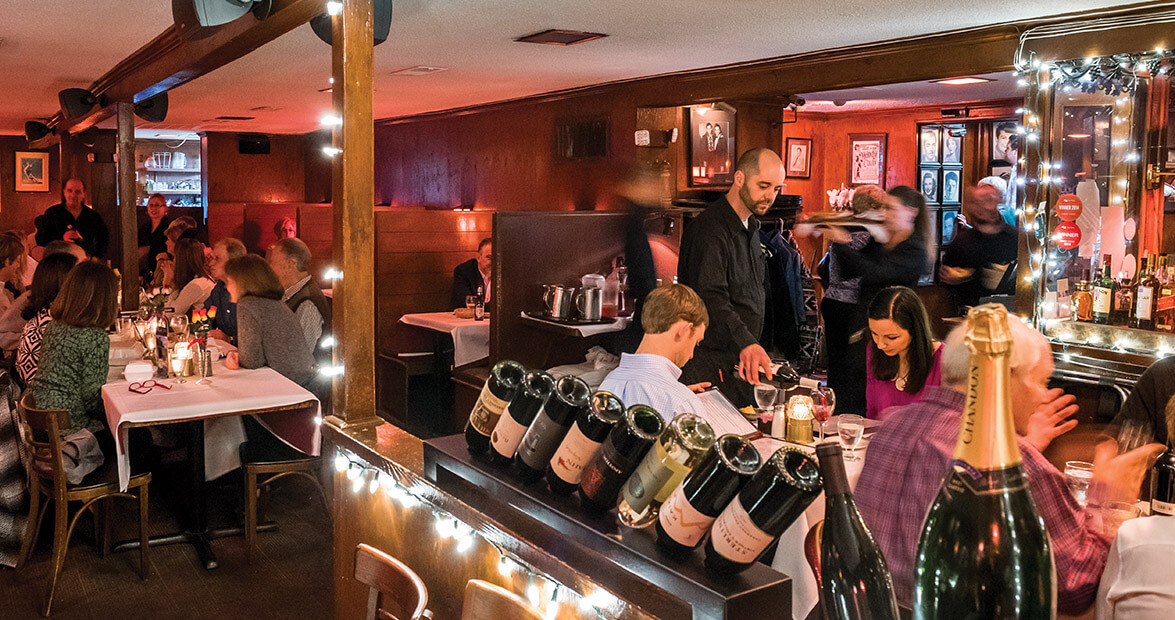 I could go anywhere for dinner on my birthday. I’m a food writer, after all. I know — or I’m supposed to know —  every great plate in my town.

So why do my husband and son take me to the same place every year, a 37-year-old Charlotte restaurant that fits no one’s definition of trendy?

Maybe it’s because at Beef ’N Bottle, we’ll all get something we need: For my college-age son, it’s the mystique, that Quentin Tarantino aura of squinty-eyed tough guys and ice-cold martinis. He hasn’t got a tough-guy bone in his body, and he hasn’t developed a taste for martinis yet, but he likes to imagine that someday he’ll have both.

For me, it’s nostalgia, a connection to the 1960s, when my dad was a traveling salesman who was gone all week and came home on Fridays with exotic souvenirs in his black Samsonite suitcase, like nightclub matches.

For my husband, it’s an excuse to eat a darned good steak. 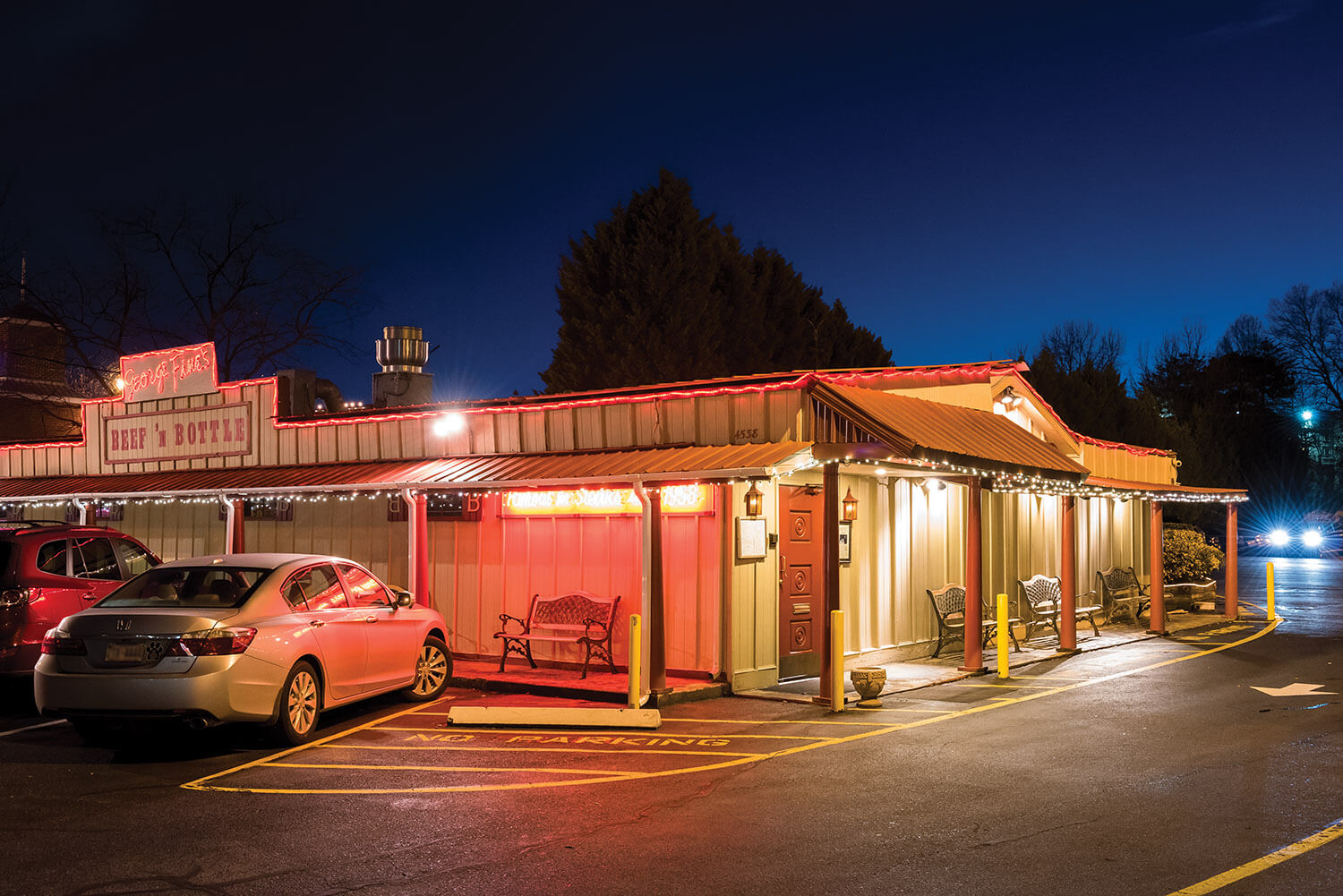 You can’t just drive by the plain little building on South Boulevard in Charlotte, with the red neon sign and the lights wrapped around the low roof, and understand the pull of Beef ’N Bottle. You have to go inside, past the framed photos of celebrities from the golden age of Hollywood — perky Audrey Hepburn, somber Cary Grant, simmering Jean Harlow. You have to walk into the dim front dining room, where it takes a reservation well in advance to score a booth on a Saturday night. (“In the booth, in the back, in the corner, in the dark,” I always joke, quoting an old Flip Wilson routine from when I was a kid.)

You have to settle into that booth, and wait for the complimentary cheese spread and crackers brought by a waiter or waitress wearing a black vest and black pants. Very Vegas pit boss. You have to order a martini — oh, go on, you know you have to — and get a salad with your steak, just so they’ll bring you that tray full of onion and pepper rings, cucumber slices, and cherry tomatoes, so you can make it how you want it. (Pro tip: If you get the blue cheese dressing, you’ll have a little left to go with your steak. If you’re going to sin, go all in.)

Then you have to pick your steak. Personally, I go with the rib eye, although New York strips are good, and the filet is popular. You have to order it how you want it, which, I hope, will be no more done than medium-rare. They’ll shake their heads in the kitchen if you order it well-done. They’ll shake their heads, but they’ll do it, because these folks have been around awhile, and they’ve seen it all, even butterflied and burnt. 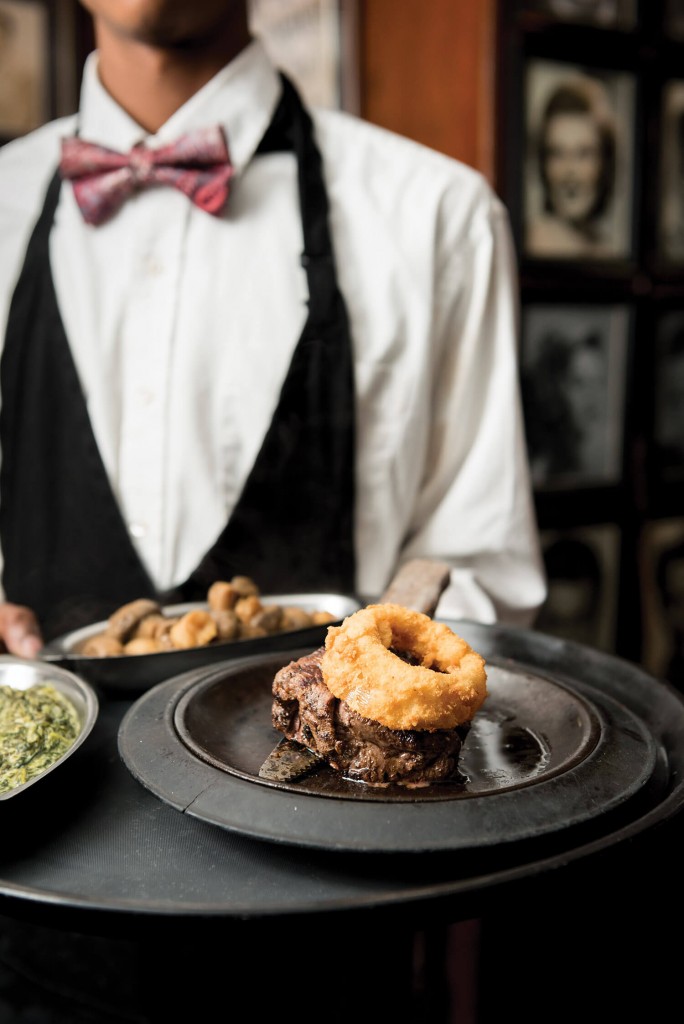 A few years ago, I got assigned to do a Charlotte Observer story about a Saturday night at Beef ’N Bottle, by the numbers. I spent hours counting every picture (87) and dirty martini (56), finding out why there’s a washroom sink on the landing outside the restrooms (because there was no room for one in the men’s room), and checking how many steaks can fit on the grill at one time (25 to 30, when it’s busy).

I spent a glorious hour just watching, over and over, every move of the grill cook: Brush a splash of melted butter on a flat top griddle that’s radiating heat like a parking lot in August. Slap a steak on the sizzling butter, brush it with more butter, and sprinkle it with a thick coating of seasoned salt. Grab tongs and turn the steak over. Let it sear for 30 seconds, no longer.

Flip the steak to the right, so that it lands on the grill in a precise spot: rare steaks at the front, well-done at the back, and placed left to right according to which order came in first. (If the grill cook has to step away, another cook can “read” the grill and not ruin a single steak.)

Place a black iron weight on each steak to make it cook faster. Flip the finished steak onto a heated metal plate, give it a final squirt of garlic butter, mark it with a colored pick (red for rare, pink for medium-rare, white for medium, dark brown for medium-well, taupe for “ruined”), and send it on its way.

I watched the waitstaff toast the pressed garlic bread — every table gets a basket — and I tracked the shrimp cocktails to their tables. I hung around back in the second dining room, an atrium built in 1998 to fit in more tables (more convivial, but not as cozy as the wood-paneled front room). 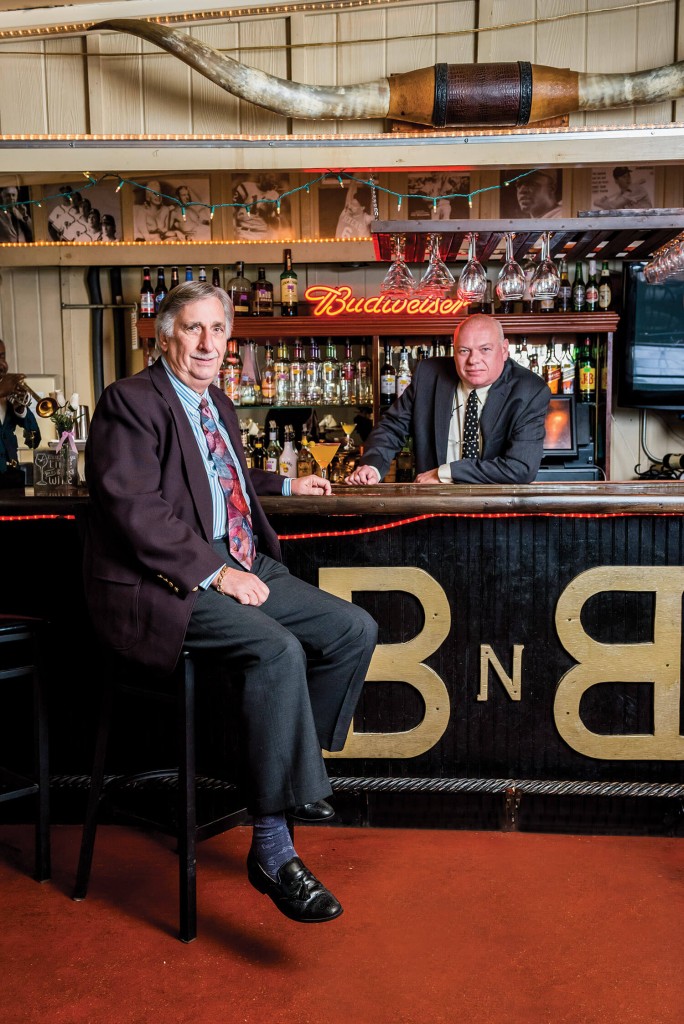 In the office, I saw the picture of founder George Fine with Hugh Hefner, who visited in 1983. (Other famous guests: Kirk Douglas, Arnold Palmer, John Boehner, and Zach Galifianakis. All those old Hollywood pictures aren’t previous patrons, by the way. They’re just there because George Fine liked how they looked.)

I met line cook Bernice Barrett, who’s part of the Beef ’N Bottle legend: After opening his first Charlotte restaurant, The Amber House, in 1958, Fine followed it in 1960 with an uptown restaurant called the House of Steaks, on the land where Discovery Place is now located. Upstairs, Fine had a club called The Melody Club, where the waitresses wore Hefneresque bunny tails and ears, and where the go-go dancers once included a 16-year-old Barrett.

The current Beef ’N Bottle isn’t as old as people usually think. When the city built Discovery Place in 1978, Fine moved to South Boulevard, into a building that used to be a tavern, and opened under a new name.

Fine died in 2009, at age 83, but his portrait hangs on the wall over the cash register. He was a traveling salesman from Massachusetts who came to Charlotte selling dyes to the textile mills in the 1950s. He opened his restaurants to give his wife something to do.

According to managing partner Rick Bouman, Lavon Fine was born in Kentucky, in the same “holler” as Loretta Lynn’s family. She’d been running a bar and grill since she was 13, so it was something she knew how to do.

The Fines never had children, and Lavon died in 1988. Fine’s financial adviser, Ron Rice, is president of the company now. Little has changed since Fine died, though Rice and Bouman have expanded the menu, adding more seafood.

“George kept it ‘four steaks, four seafoods, and four ice cubes,’” Bouman likes to joke. Fine thought that if you kept things simple, you could always do it right.

Maybe that’s what brings my family back every year for my February birthday. Once a year, we want to do it right.

A good steak, a dry martini, a little cheese spread, and a nice salad. What more do I need to know that I’m still alive?