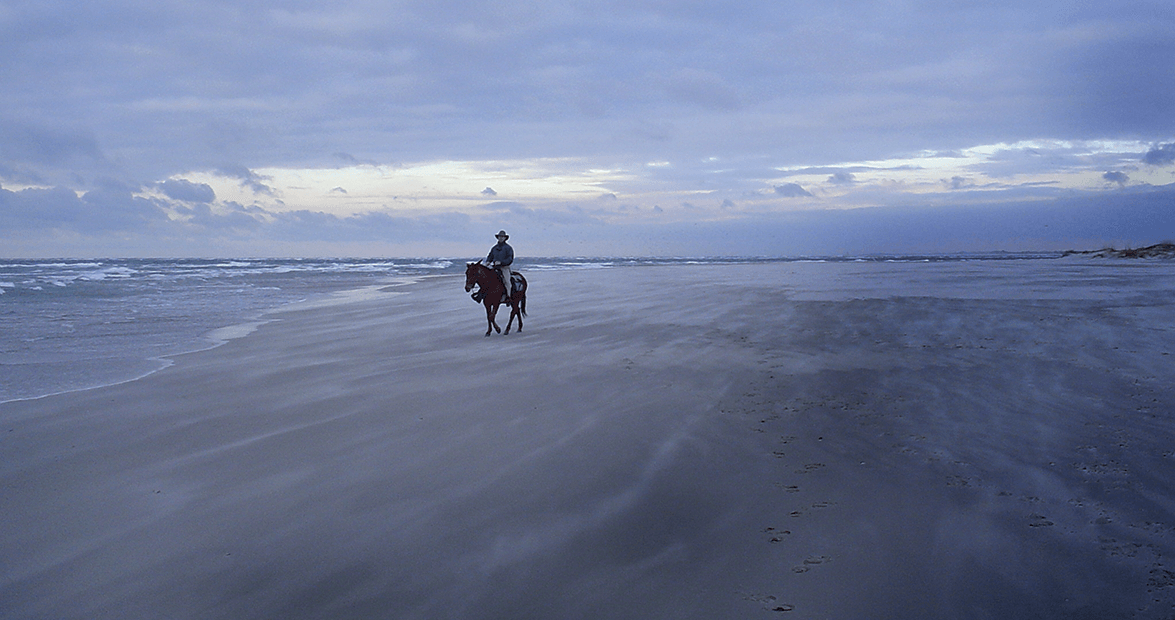 He grew up around horses. But this mule had to be different. He had to be ready, to be right, to be a reliable companion. Harberts wanted to ride across his home state. And the journey would be as much heart and soul as it would be muscle and grit.

Harberts found his mule in Roxboro. Harberts liked Woody not for his strong back or pedigree. No, Harberts picked Woody for one reason: his eyes.

“When I looked into Woody’s eyes, it reminded me of sailing down in the southern ocean and seeing a whale beside my boat,” Harberts says of a prior trip on the high seas. “But what I really remember was [the whale’s] eye. The mule’s eye is the same thing. It struck that note, that note of loneliness.

“We talk about height and size when it comes to a technical purchase. But in the end, it was an emotional purchase for me.”

For $750, Harberts bought Woody, his new friend and vehicle. Harberts calls mules the “diesel engine of the equine world.” And together they clipped-clopped across North Carolina’s lower half, following two simple rules: Take roads with names, not numbers; and visit communities with unusual names.

He traveled toward blink-and-miss places that go by words like Uwharrie and Tin City, Tomahawk and Hell Town, as well as Love Valley, Lovejoy, Earth Haven, and Pin Hook.

But why did he go? That’s where things get interesting.

Harberts grew up in Statesville and had all sorts of adventures. At 4, he took off down the street to see his buddies, wearing rubber boots and nothing else. At 9, he walked down N.C. Highway 115, thinking he’d make it 22 miles home.

In 2004, he and Woody started in Oriental, as Harberts toasted corn liquor from a Mason jar. He survived on oats and rice, and he took the back roads.

Four months and four days later, having picked up a pony named Maggie along the way to be Woody’s companion and his packhorse, Harberts reached the Tennessee border. Yet he kept going. A year later, the three of them waded into the Pacific Ocean.

Since then, he has changed mules and now rides in a tiny wagon. He and his wagon, pulled by his new mule, Polly, have traveled across Newfoundland and from Canada to Mexico.

But on a recent December day, in a cabin at the end of a dirt road outside Lenoir, Bernie Harberts sits.

He sits barefooted beside a woodstove, a clock tick-tick-ticks on the wall, and a pot of beans simmers on the stove. Art, his 86-year-old dad and a retired doctor, snoozes in a chair. Max, the 16-year-old family dog, sleeps on a couch.

Harberts’s dad built this tiny cabin, not even 600 square feet, on 900 acres. He used a box from a $25 Sears car battery as the blueprint. He sawed oak, pecan, and black walnut logs into planks. This is home. Here, Harberts parks his wagon, pastures his mule, and puts his saddle in the barn. He catches up on email, writes his blog, cooks on the woodstove, schedules speaking engagements, visits friends, and plans what’s next.

In November, he came back from Newfoundland following the death of his mother, Lislott. After she died, Harberts’s dad spent some time in a hospital. Today, his dad is better. But Harberts stays close.

“I’ll keep coming back to North Carolina,” Harberts says. “A lot of it is family. Dad is here, Mom was here, and the farm here is the big center. You see, I was born in Seattle, and I moved here when I was 4 or 5. But it’s hard to explain why I keep coming back. But it’s not hard to explain to a fish. Why do they go upstream? The fish don’t know. They just do. I feel like a fish.”

He didn’t feel like that at first. After college, Harberts had a sweet sales job for a woodworking company out of Mooresville. He drove a black turbo 240 Volvo, lived on Lake Norman, and traveled to Germany for work and to Rome with his girlfriend.

Then one day at work, while sitting at his desk, he spilled his coffee. Rather than grab a rag, he instinctively typed Control-Z for “undo.” “I’d taken this office job to pay for my real dream, to buy a sailboat and sail around the world, but I’d gotten so caught up in the virtual world I’d begun looking for solutions to my physical world — like a spilled cup of coffee — with a digital solution.

“I come from a line of visceral people, and we think with our guts. My dad survived the Dust Bowl, built a cabin, and I built rafts and tree forts. Right then, I felt like I was on a drawbridge to a digital kingdom I didn’t want to become a citizen of.”

Harberts found his sailboat, Sea Bird, a quarter-mile from his home; bought it for $12,000; and took off.

He traveled 24,000 miles to almost 30 countries in a 34-foot sailboat. When the weather was bad, he trained horses in St. Thomas. When the water was safe, he pointed Sea Bird toward the open sea and wrote about it all for newspapers in New Bern and Statesville. Loneliness, though, gnawed at Harberts. There were stretches, sometimes as long as 180 days, when he didn’t see anyone except his own reflection. So after five years, he came home. He was, as he says, “ready to visit.” But he felt like a foreigner. So after a while he found Woody.

“I was too broke to buy a horse, and I was too proud to ride a cow — I heard that phrase in New Mexico — and I knew I couldn’t sail across North Carolina, and I figured, dang it, a mule will be for me,” he says, laughing.

He chronicled the statewide trip for newspapers in Salisbury and Winston-Salem to make a little money. He’d hitch Woody outside a library and write on a computer inside. He knew he was done when he hit 750 words, or when Woody started braying and somebody would ask, “Does someone here own a mule?”

He later turned his trip across North Carolina and the nation into a book, Too Proud To Ride A Cow. He boiled down the impetus for his odyssey to one sentence: “I understood that while others might rely on one day having lots of money to buy their dreams, I’d start out young and build my own vision.”

In parts of the state where he could not buy feed for his mule, Woody survived on what Harberts called the “Piggly Wiggly diet.” He’d buy five pounds of rice, three pounds of lentils, a tube of rolled oats, and a quart of olive oil. In the parking lot, he would feed most of the groceries to his mule. The rest he stowed in his saddlebag.

Harberts learned to stay warm by swallowing hot peppers and washing them down with olive oil. He slept in a tepee, spent no more than $500 a month, and traveled no more than eight miles in a day.

He relied on his sailor sense. He had a compass. But he had no cell phone, no gun. For directions, he used a gazetteer or guidance from strangers. He jotted down what he heard on cigarette packets, foil wrappers, and the backs of sales receipts.

He packed light: a pair of gloves, a bandana, two pairs of socks, a pair of boots, a broad-brimmed hat, two pairs of tan slacks, and two blue shirts. He wore no underwear. But he always had a clean shirt — a tip he got from another great adventurer, the fictional character Don Quixote.

“I’m paraphrasing here, but someone told him, ‘Don, do whatever you want, but always carry a clean shirt,’” he says. So, Harberts did. And he discovered much with the help of Woody.

“I learned that to see the best side of humanity, you should travel with an imperfect vessel,” he wrote in his last newspaper column. “If you want to slip smoothly and unbothered across the land, drive a car or take a plane. People will leave you alone because you don’t need their help. You won’t experience much either.”

In Pin Hook, Harberts discovered the flour burger. It’s a concoction made with meat, flour, and onions, a kitchen remnant of North Carolina’s hardscrabble past. Harberts found it nowhere except in that tiny community in Duplin County.

“If you traveled slowly enough, you could get a vision of North Carolina that’s not quite extinct yet,” he says. “It’s really localized, and it made me feel in a weird way a little like a discoverer. I know that sounds a little hollow when you think about today, with all this development around us. But sometimes, in this creeping space that’s left, you can still make discoveries, and that meant a lot to me.”

Wherever he went on this seemingly solitary trip, Harberts drew a crowd. Sometimes he felt like hiding in his tepee. But he kept riding on a saddle nearly a century old and gladly fielded the oddest questions about Woody from curious onlookers.

“That’s a cross between a llama and something, right?”

“Did his head bleed when you took the horns out?”

“Does that thing eat meat?”

“Does that thing lay eggs?”

Harberts still laughs at that last one.

On his trip across North Carolina, Harberts bought two left-foot spurs in Love Valley, talked about natural childbirth with a hippie in Earth Haven, and rubbed emu oil on an injury from a mule kick to his gut in Tin City.

He also depended on the kindness of strangers. He had a name for it: the Moses effect.

“I’d stay over and over and over and over at someone’s house, and none of them had ever heard of me,’’ he says. “They just knew I was traveling across the state on a mule, and they’d put me in a bedroom across from their bedroom, and in the morning, they’d fix me a sandwich and say, ‘Good knowing you. And watch out, there’s a lot of crazy people out there.’

“But I never found that. I found that you make yourself vulnerable by living in fear.”

Harberts does public speaking, and when he gives his talks, he brings his old saddle, bottles of water, and a few hot peppers to show how he would keep warm. But he always emphasizes that a journey of his kind is not about the gear. It’s about people he met, the discoveries he made. He found that out years ago, long before sitting down to chat about it all in a tiny cabin with beans simmering on a woodstove.

He still sees the people he met as friends, and he thinks of the places he and Woody passed through like home.

And his quest is far from over. “Deep inside us — small in some, larger in others — lies a hole,” he says. “It hurts when it’s empty, less so when it’s full. The usual way to fill this hole is with a spouse, family, career, religion, whiskey, Mickey Thompson mud tires, or social media. Voyaging is how I fill my hole. Mules. Boats. Strangers. Friends. Flying fish. And [writing] articles. That’s what fills — and eases the discomfort of — the chasm inside me.”

To book Harberts as a speaker, please contact Carolyn Allen at the North Carolina Humanities Council, callen@nchumanities.org or call (336) 256-0140.