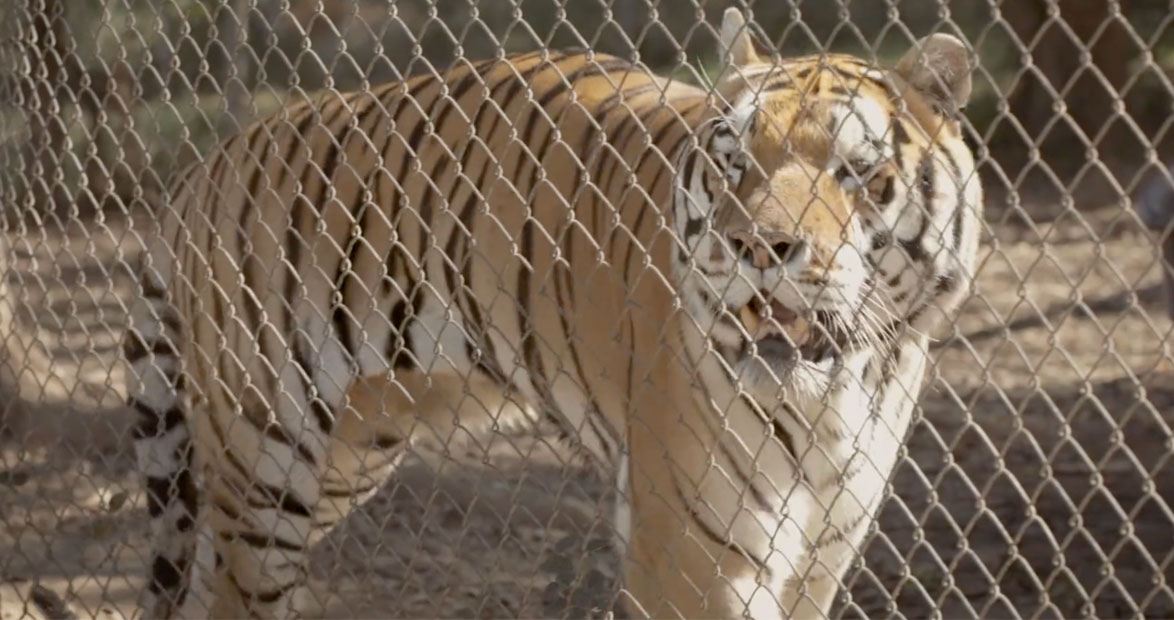 The sun is out, but the temperature is barely pushing 60 degrees on this breezy day.

Still, it’s balmy weather for a dip — if you’re a tiger in a plastic kiddie pool.

On the other side of the fence, a school group chatters excitedly as a tour guide shares stories about India and her two roommates, Caprichio and Carolina, the tigers in the enclosure behind the tour guide. It appears that India couldn’t care less about the group in front of her until, after a few minutes of play in the pool, she stands and walks lethargically along the perimeter of the fence, leaving a trail of water in her wake. By the time the tour guide tries to warn the students of her presence, their fate is already sealed.

Undoubtedly in good spirits is India herself. Though she’s only been at Carolina Tiger Rescue for a little more than a year, it’s clear that she’s quickly made herself at home. In 2016, India and 15 other animals were relocated here from a closing Colorado facility.

While the animals that Carolina Tiger Rescue receives are unable to return to the wild, each of the nearly 50 cats of 10 different species who live on the 55-acre property get to spend their days playing with toys, splashing in their pools, and basking in the sun with their enclosure-mates, in living conditions that meet their unique needs.

Seventeen of those cats are tigers, and although Pittsboro, North Carolina, is a far cry from their native habitats in Asia, Carolina Tiger Rescue is one of the few places in the country where tigers can live peacefully, and safely.

Surprisingly, the original mission of Carolina Tiger Rescue wasn’t to rescue tigers. In the 1970s, UNC geneticist Dr. Michael Bleyman began a breeding program for endangered and threatened carnivores — caracals, servals, ocelots, and binturongs, specifically. The organization soon recognized a need to offer sanctuary to big cats and, in 2002, ended the breeding program to focus solely on rescue and education.

Less than 10 percent of the estimated 10,000 tigers in captivity in the United States have a safe place to call home. “They’re pets in backyards, they’re in junkyards, they’re in bad roadside zoos and failing facilities,” tour guide Janet Schaeffer says.

Sebastian, at approximately 600 pounds, is the largest animal at Carolina Tiger Rescue, and can now usually be found sleeping in his enclosure. It’s in stark contrast to his life as a young lion, when he, along with 10 other lions and tigers, was used as décor alongside bears and wolves in a Texas haunted house. Tarzan used to roam the ground floor of a hotel in Mexico, but when guests began to complain, he was forced into a small cage for two years, unable to fully stand up. Tarzan struggled to walk for more than 10 years, until he passed away in 2016. Rajah and Kaela were rescued in-state; the sibling tiger cubs had been found wandering NC Highway 216 near Charlotte one evening in 2005. The cubs were held in quarantine at the North Carolina Zoo while the staff at Carolina Tiger Rescue rushed to build an enclosure for them.

It’s stories like these that help remind volunteers and visitors — anyone can sign up online for a guided tour — that while spending time with the animals is exciting, educating the public and spreading awareness are inextricably tied to the Carolina Tiger Rescue mission as well.

“They’re not just here to be a spectacle for people to look at,” animal keeper Larissa Keliher says. “Our goal is to educate the people who come here as to why these animals are here, so that we can prevent this in the future.”

After a tour, some visitors are curious about how they can continue to be involved with Carolina Tiger Rescue. That’s when the idea of volunteering is typically first introduced. “There are always more things to do than there are hours in the day, so we can always use more hands,” Keliher often tells visitors.

In 2017, more than 100 volunteers donated their time to Carolina Tiger Rescue. There are several types of volunteering roles; most new volunteers are interested in the animal care positions. Animal care volunteers spend a minimum of 16 hours per month helping animal keepers with daily activities, like cleaning enclosures or tossing chicken quarters and other raw meats down the feeding chute during mealtimes.

If being within four feet of a hungry tiger is a little too close for comfort, there are also volunteering roles that take place on the other side of the visitor barrier, such as tour guide, which only requires volunteers to come in twice a month. Regardless of which role a person selects, each volunteer is able to play an important role in ensuring the well-being of the animals on site.

“As a volunteer, this is the one spot where you can spend a beautiful day out with tigers, four feet away from them,” Schaeffer says. “That, to me, is always exciting.”

To become a volunteer, visit carolinatigerrescue.org, fill out the online application, and attend an orientation.