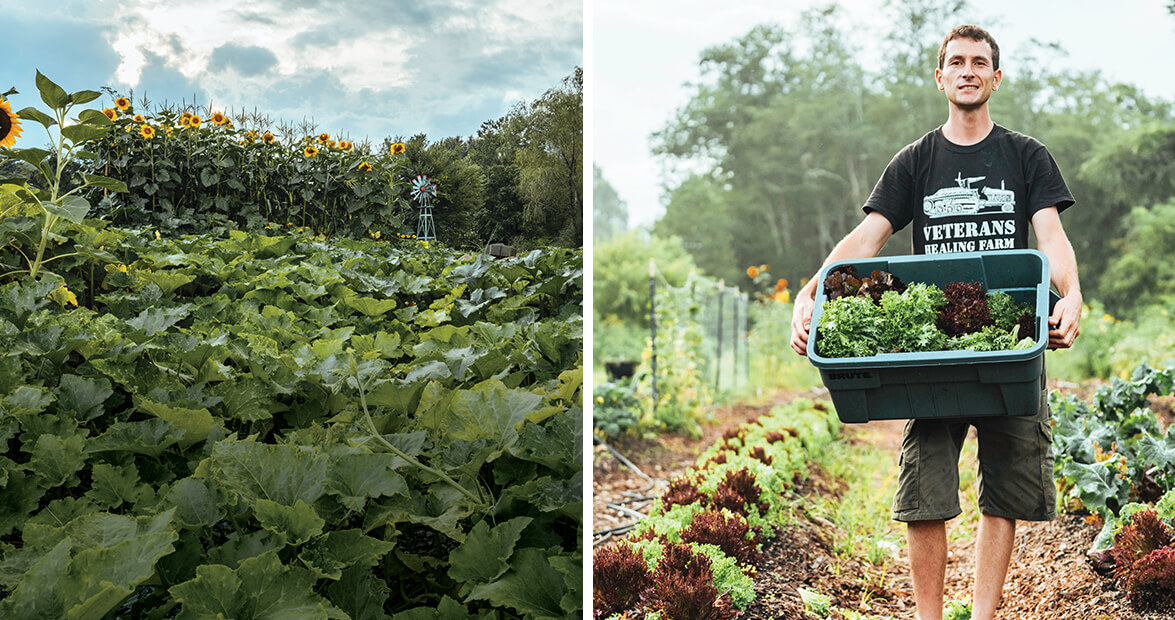 Back in 2007, John Mahshie brought the woman who would become his wife to a plot of land on the outskirts of Hendersonville. John and Nicole stood on the porch of the house overlooking a fallow field, listening to the crickets chirp, as he tried to convey seven years of hurt and isolation. He understood what it was like to be alone, he told her. In 2000, right after he enlisted in the Air Force, his father died in a motorcycle crash on the Blue Ridge Parkway. Mahshie was on his first duty assignment, thousands of miles away. Bury the grief, he told himself. You have a job to do. Still, depression nipped at his heels. He struggled to make friends. The September 11th attacks happened. Mahshie kept preparing to be deployed, then, eventually, was sent to southern Spain. Even after he left the Air Force, the depression remained, lingering through the transition and culture shock of post-military life. In the Air Force, he’d had a specific purpose as a ground equipment mechanic and a member of the Honor Guard. Now that he was no longer in the armed forces, Mahshie’s purpose was gone, too.

There was one thing that kept him connected, though. Before his deployment, Mahshie went on a service mission to a small border town outside of Nogales, in the Sonora region of Mexico. He undertook the task of creating a little garden in the corner of a churchyard, and as he dug, he found a different type of freedom, a new way to connect. Untroubled for the first time in years, he recognized what he needed: to be outside with people who cared about him.

Gardening, he now realized, had saved his life. And this farm, he told Nicole, could save others like him. 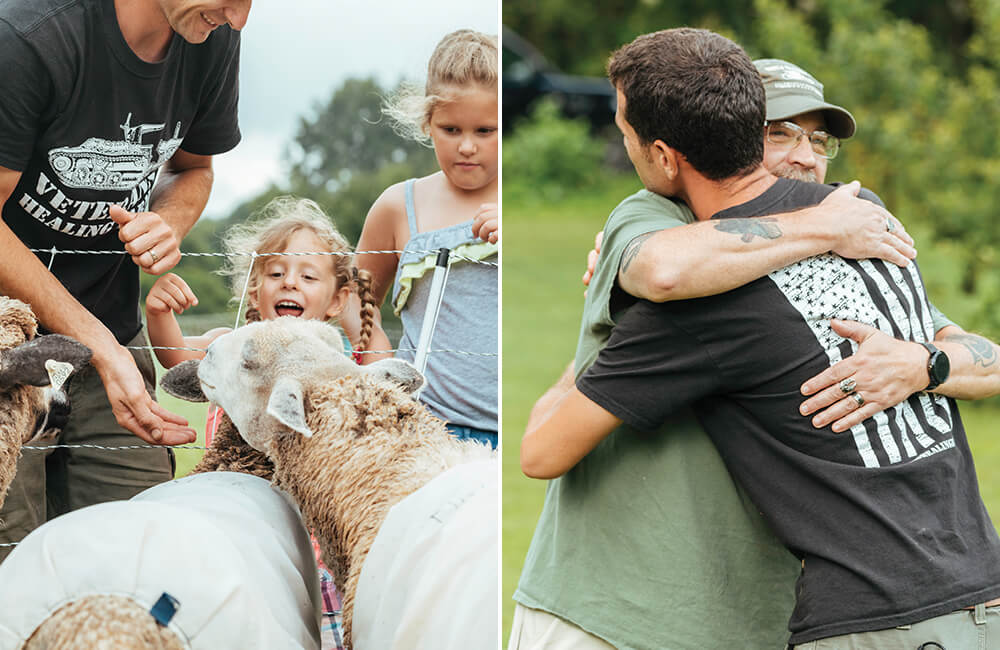 Left: Mahshie’s daughters get a kick out of sheep. Right: Mahshie and fellow veteran Kevin Smith share a hug. photograph by Adam Mowery

It’s two hours until sunset, and there’s a harvest to bring in.

Mahshie’s operation is at the mercy of the elements, and this year the rain hammered his fields. Still, the plants are beginning to bend under the weight of their bounty. Now that the sun is out, the humidity is thick. Volunteers work through it, beads of sweat clinging to their bodies like jewelry, glistening in the sunlight. To finish before dark, the dozen or so workers divide and conquer, scattering to the four corners of the property to pluck as many ripe tomatoes, peppers, and eggplants as they can.

Tomorrow they will give away everything they pick.

Every Tuesday during harvest season, the produce from the Veterans Healing Farm is transported to the Charles George VA Medical Center in Asheville. Tuesday mornings take on an aura of wonder when volunteers set up their tables at the main entrance of the hospital; the vivid colors of vegetables piled high sharply contrast with the beige-and-brown brick building behind them.

Gardening had saved his life. And this farm could save others like him.

The bounty, and the lush 10-acre plot that produced it, are Mahshie’s passion projects. It took a while for the venture to manifest, and until it did he worked as a web developer, became a father, and figured out how to apply for grants to make his vision a reality. The garden began in 2013 and became a nonprofit in 2014. He wanted to do something for people in his life and people in the community, to give volunteers and veterans a place to make friends and grow food together.

Mahshie darts into the fields barefoot, bits of grass clinging to his toes as he hunts for vegetables that need to be picked. He’s decided that this afternoon’s motto is embrace the suck, part of the military mind-set that’s remained in his life, even though the uniform is long gone. 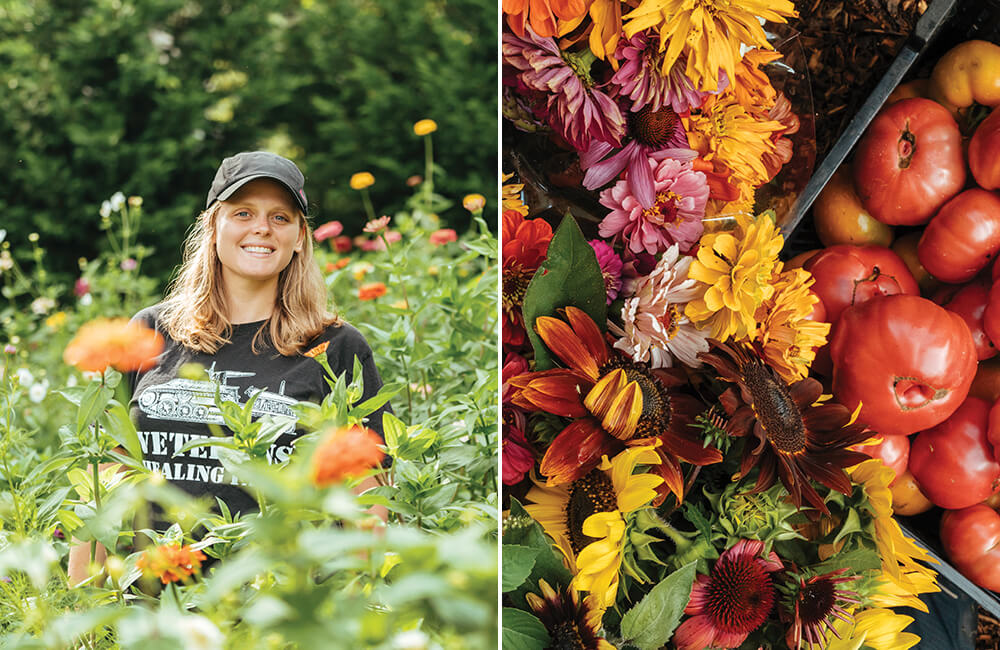 Mahshie’s wife, Nicole, cofounded the farm. Fresh flowers are harvested from the garden along with produce. photograph by Adam Mowery

He harvests as he talks, since the daylight is dying and four acres still need tending. As he cuts the Salanova lettuce and trims its leaves, he tries to put the roots of his project into words, pausing at times to look around, as if he can’t believe that this place, this green sanctuary in his backyard, is real.

“I don’t have any pity on a veteran,” he says, “but I do have empathy, respect, and love.” To him, the fruits and vegetables his volunteers grow are a tangible means to an end, something to communicate to the staff and the veterans that they aren’t forgotten.

Kevin Smith comes back for the bees. As he walks a wheelbarrow of watermelons and cantaloupes out of the garden, a bee crosses his path on the way to the sunflower field, and he pauses to watch it go. “That’s one of mine,” he says, and a broad grin spreads across his face. The farm has four hives on the hill near the big house, and Smith says that taking care of them keeps him calm — there’s just something about watching the swarm do its thing. He keeps looking toward the flower patch, even though the bee has disappeared.

“I don’t have any pity on a veteran, but I do have empathy, respect, and love.”

Smith saw combat over 13 years in the Army, and was deployed several times to places like Bosnia, Kosovo, and Iraq. When he became a civilian, he struggled with losing the identity and the friendships he’d made while he worked in field artillery. This community is the closest he’s come to finding something like he had, like the band of brothers that always had his back. It’s helpful for Smith to know that the farm is here for him, and he appreciates the community members who give their time and energy here. It shows Smith that people care about veterans like him when, sometimes, the bad days tell him otherwise.

He takes the energy he gets from the farm and puts it toward working with what he calls the “forgotten ones” — former service members from World War II, the Korean War, and the Vietnam War who are unable to make it to the farm. On Tuesdays he makes sure they leave the VA with a bag of produce and a bouquet of flowers, hoping it brings them happiness, even just for a little while. He knows that a lot of veterans wrestle with thinking that society doesn’t want them anymore. He has those thoughts, too, and he makes a point of trying to convince veterans otherwise.

“When you’re in the military, you always have people,” Cari Mueller says. “You’re all wearing the same uniform, so you’re never really alone.”

Mueller, now 46, enlisted in the Army just four days after her high school graduation, and soon found herself on a humanitarian mission to Somalia in 1992, as a medical support specialist in Mogadishu. What she saw there still haunts her.

When Mueller left the military, she was alone for the first time since she was a teen, searching for that sense of community that’s lost when a veteran leaves active duty. Mueller was unable to fully describe the scope of what she experienced, or to deal with the memories. 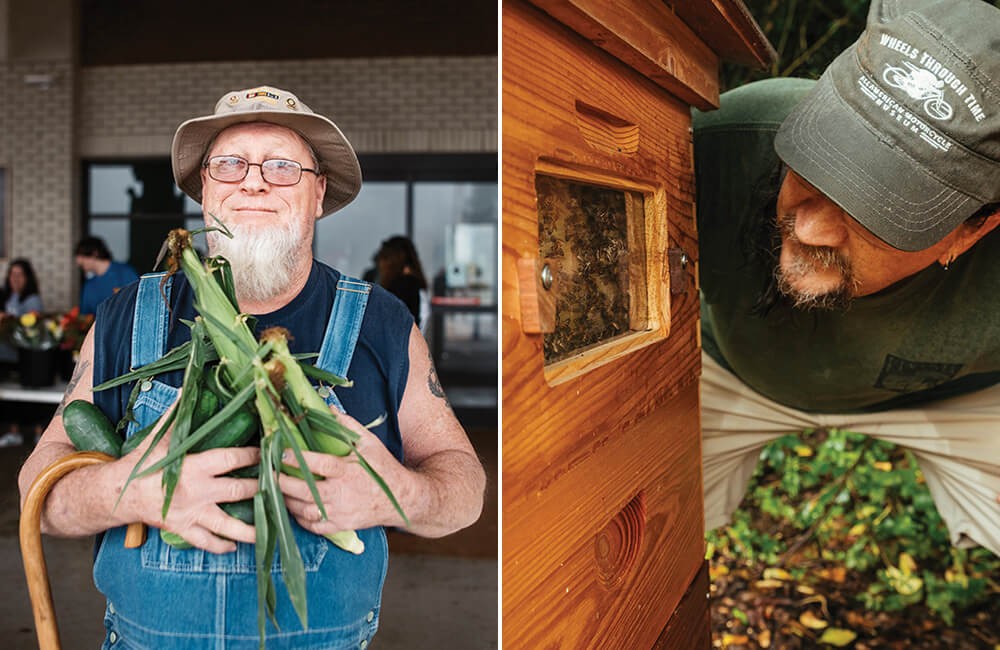 Right: Michael Davis, a veteran from Spruce Pine, loads up on corn and cucumbers at the VA hospital in Asheville. Left: Kevin Smith tends to the bees at the Veterans Healing Farm. “Beekeeping calms me,” he says. “I guess it’s the awe of watching them do their thing.” photograph by Jack Sorokin (Left) / Adam Mowery (Right)

The air changes, and the residual odors of damp and decay are replaced by the sharp, slightly peppery scent of tulsi basil. The rustle of wind through the foliage brings Mueller back, reminding her that she isn’t abroad any longer, but rather in the Blue Ridge Mountains. She runs her fingers around the leaves of a dahlia, a tactile technique that keeps her grounded in the moment. The farm has space when she wants it, and community when she needs a reprieve from the battle going on in her mind.

“I’m standing here talking to you. I’m not dead,” Mueller says with a wry smile, realizing that this week marks the two-year anniversary of when she found the farm.

Mahshie looks up from the herb garden and comes over to give her a hug, telling her he’s happy that she’s still here. They both understand that death doesn’t always come on the battlefield. Sometimes it comes later, when you’re on home soil, believing that you’re safe.

By 9:20 p.m., the volunteers have gone home, and the cloud cover blots out the stars. Lightning bugs twinkle as evening settles on the mountain like a navy blue blanket. According to the clock, Mahshie is out of time, but he doesn’t seem to notice. He’s still preoccupied with the rows of vegetables. It’s almost too dark to see his targets, so he works by feel, wondering if he’s got enough, if there was more he could have done today.

A half-hour later, he calls it a night and retreats back toward the big house. There’s always more to do. But for now, he’s done enough.