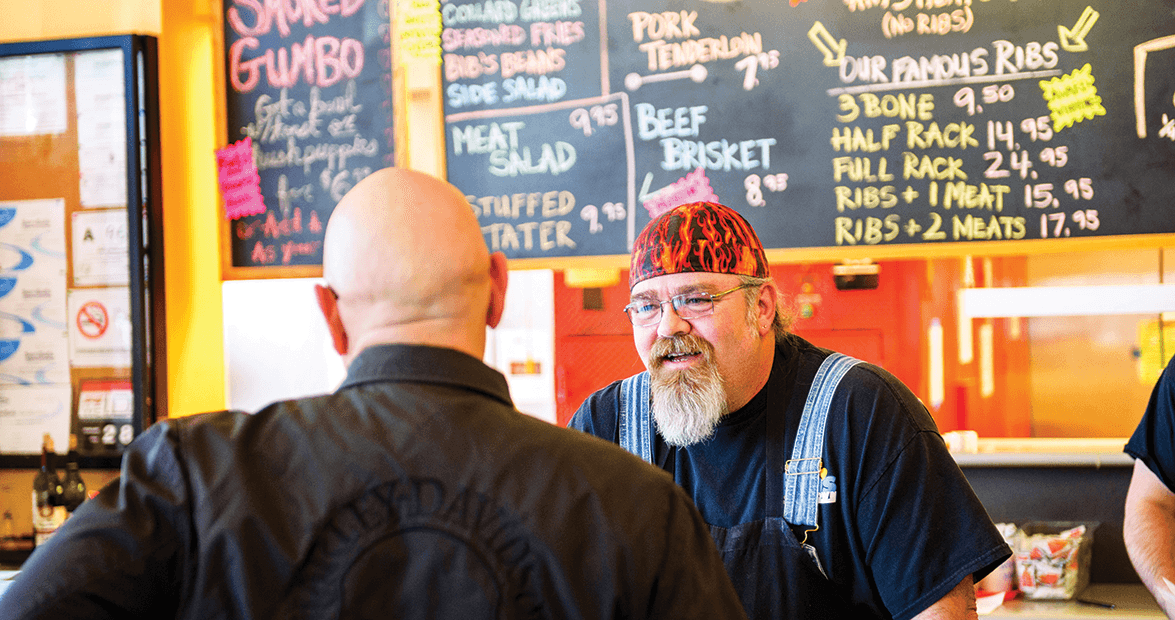 Since the beginning of its existence, Winston-Salem has sought to be the best of all possible worlds.

The town of Salem was founded in the 1760s, and the nearby town of Winston appeared many decades later. Usually when two towns meet, one submits to, and becomes absorbed by, the other. But in this case, they brought out the hyphen and made everyone happy — everyone except for a disappointed and bitter minority who wanted to name the town Salem-Winston.

Even geographically, Winston- Salem has tried to be all things to all people. Despite being 200 miles from the nearest ocean, Winston-Salem was a federally designated port city. By 1916, because of all the tobacco being imported from Turkey, it became the eighth largest port of entry in the country. There is no beach in Winston-Salem, however, so be sure to prepare the kids for disappointment on that summer trip.

Which brings me to Bib’s Downtown, where the let’s-make-everybody-happy spirit of Winston-Salem meets its delectable match.

You probably know this already, but in North Carolina there’s eastern-style barbecue and there’s what’s known as Lexington-, Piedmont-, or western-style. The twain have never mixed. But Bib’s is an outlaw: It has recused itself from this eternally raging war, and it serves neither kind. I hope you were holding on to your baseball cap when you read that: Here you will find neither western nor eastern. Here you will get what proprietor and pitmaster Mark Little calls Bestern.

“It’s the sauce,” Mark says. “It’s got depth: sweet up front, savory in the middle, and at the end there’s a little bite.”

This is true. Tasting his sauce is like meeting a really interesting person at a dinner party: The more you know about him, the more you end up liking him.

Barbecue on a motorcycle

Mark is a really interesting person, but no one calls him Mark. Some call him Pig Daddy; others call him Pap. Mark describes himself as a pitmaster. Why? Because this is a man who has cooked barbecue in and on everything you can think of: in a pit, on top of a pit, in barrels, and on oil drums. He tells me he’s cooked every living thing on four legs — except domestic animals — and every kind of bird there is, except those on the endangered species list. He’s exaggerating, of course — neither elephant nor Komodo dragon have ever been offered at Bib’s and never will be — but you’re not going to go very far in the barbecue world without the ability to exaggerate. It’s like being a novelist.

Bib’s — so called because of the trademark bib overalls Mark wears to work every day — took up shop in 2008 in the shell of an old Firestone auto shop on West 5th Street, half a block over from 4½ Street (I’m not joking). It’s a beautiful building, built in 1959. The roof is unmistakably retro, from a time when folks who were designing buildings were thinking, “What kind of new thing can I do with a roof?” In the case of the Firestone building, they made it all zig-zaggy, triangulated it accordion-style. It looks like it could be folded up and taken away to another building in need of a roof. The original concrete floor meets your feet as you enter, and the kitchen uses the old bays where broken cars were once healed. Though in barbecue years Bib’s is a recent addition to the scene, don’t mistake its youth for callow inexperience. Mark Little has been cooking barbecue for many, many years; he grew up around cooks, and he himself smoked and ate every part of the pig there is — “from the tail to the oink,” as his father said. Pig tail soup is apparently delicious, and head cheese is definitely not what it sounds like, or maybe it is; either way, it’s two words that should never go together. But it’s a treat as well, according to Mark, though not one you will find on the menu at Bib’s, which, to my mind, is a good thing. 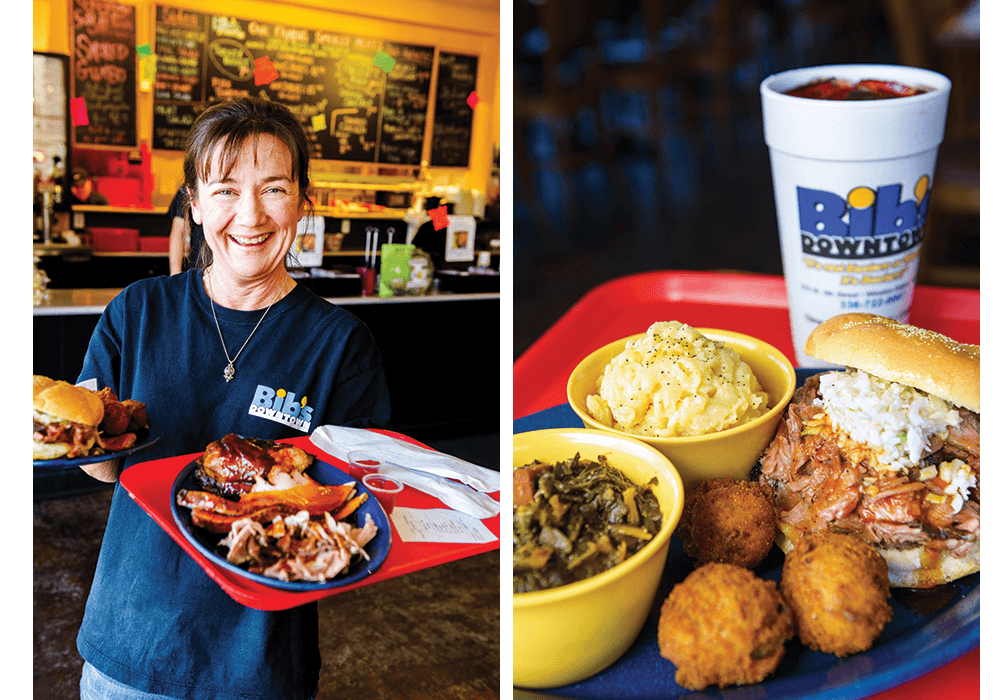 What you will find on the menu is an almost overwhelming presentation of meats. Chicken, sausage, meatloaf, and, of course, pulled pork are offered every day. It’s a potpourri of pork, a variety of delights, and, for the first-timer, it may be challenging to pick just one, what with so many meats highlighted with the requisite superlatives: Award-winning! Most popular! Famous! It all looks good.

What you won’t see on the menu is the word barbecue. It’s nowhere to be found. Not on the menu, not on the sign out front, not on the IMAX-size blackboard over the counter. This is a nice touch, and a little counterintuitive, since pretty much all Bib’s serves is barbecue, in one form or another.

So why not just come right out and say it?

“You see the word ‘barbecue’ on a sign out front and you’d just pass it by,” Mark says. “You’d think it was just another barbecue place.”

And that may be true. But I wonder if there’s any barbecue place that’s just another barbecue place. Each is its own thing entirely, an expression of the personality of a man or a woman (and in some cases both) who has grown up in love with all the ways you can serve up a hog.

Bib’s is no different. It’s not just another barbecue place, either: It’s barbecue on a motorcycle. On the one hand, it’s very, very old-school: Every bit of food they serve is homemade, drawn from Mark’s family recipes, made fresh every day on the premises. But Bib’s has an edge, a vibe. Maybe it’s the restaurant’s Art Deco building; Mark’s long, braided pigtail (the kind that’s made of human hair); or his staunch refusal to claim the heritage of Piedmont-style barbecue, even though he lives in the very heart of it.