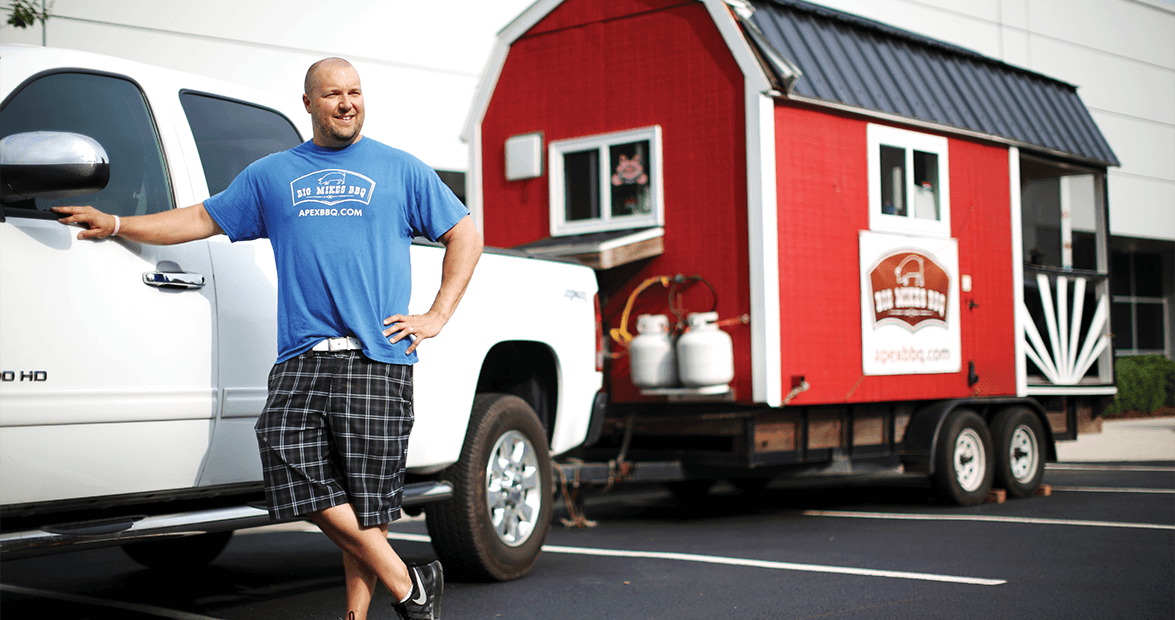 Big Mike, a.k.a Michael Markham, is really not that big.

He’s 36 years old, about six feet tall, and after a long day dispensing barbecue, he’ll work off a few hundred calories at the gym that night. So I wouldn’t call him big; I’d call him solid. Solid Mike. But the Triangle area and the entire barbecue universe may not be ready yet for Solid Mike’s Barbecue. Calling yourself Big Mike is less a precise physical description than it is a tip of the hat to barbecue culture, to history, to a world where it’s easy to imagine a Mike, a really big Mike, selling you a barbecue sandwich.

At this writing, there is but one place you can find Big Mike’s Barbecue: It’s indeterminate, location at present unknown, its setting determined by demand, a roving outlet for the conveyance of pork in its various guises. Big Mike calls it the Red Barn. You would, too, if you saw it, because that’s exactly what it appears to be. No room for towering bales of hay or horse stalls or tractors, though, just big enough for a sink and a counter and a little smoker toward the back, on what looks like a screened-in porch, and small enough to be pulled behind a GMC Sierra 2500HD. You order through one of the barn windows. On the window is a drawing of a pig holding a fork and knife, a pig with a big smile on his face, as if he’s happy to be eating himself. And, on any given day, the Red Barn could be in the parking lot of the building where you work, near a bar you frequent, or at a party where you’re the guest of honor.

Burning up blacktop
Food trucks are everywhere these days, in part because they can be. They go where they’re needed and then disappear. The concept is appealing; since they’re not stuck to a foundation like traditional restaurants, places you have to make a real effort to get to, search (sometimes in vain) for a parking spot, and then wait for a table and service, these handy diminutive eateries come to you. And more are coming every day. Applications for food truck licenses are on the rise all over the country, but licenses are not easy to get. The city of Raleigh, like so many urban areas, gently discourages them, discourages them the way human beings are traditionally discouraged from doing things they want to do: via paperwork. There are so many legal hoops to jump through, and the costs are sometimes so prohibitive, that more food trucks are being kept off the road than might be on it. Mike spent months getting the Red Barn up to code and on the road, but he did it, and the road is where he’s been for the past two and a half years, driving and parking, parking and driving, looking for hungry mouths to feed.

Restaurants incapable of locomotion fear Big Mike and his kind.

What are the pros and cons of operating the Red Barn? The best thing about it is its schedule. If you don’t book dates, you don’t work, and you save on overhead, on salaries. In a stationary restaurant you have to show up, along with a staff, even if nobody else does. And Mike can take the barn so many places! Cary, Raleigh, Apex, Holly Springs, Chapel Hill — all over. About the farthest he’s gone is Oxford. Gas is just too expensive to go farther.

The cons? You can always lose a wheel, as Big Mike did once on the way to an event. “It was Saturday afternoon, and there wasn’t anybody to fix it,” he says. “We had to load up the food and serve it catering-style.” Things are always breaking and falling apart as you bounce down the highway. And the weather can be friend or foe; rainy days and winter always bring him down.

But on a beautiful summer Carolina afternoon, there is nothing much better than walking out of your hermetically sealed office tower to a barbecue sandwich. 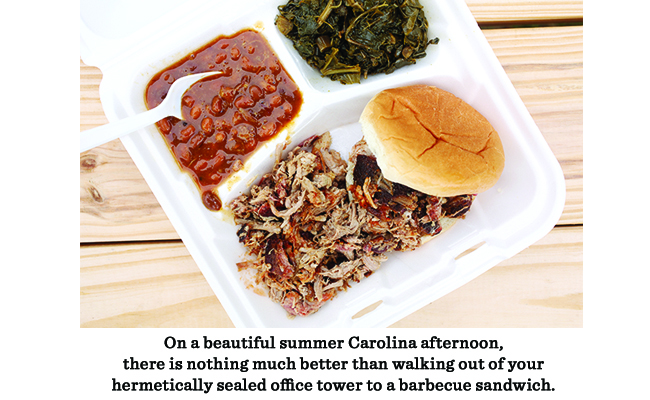 Behind the scenes
It’s frenetic inside the Red Barn, which is 18 feet long and 6 feet wide. What with sinks on one side and food on the other, you have about as much room to move around as you would in the aisle of an airplane. The Red Barn feels and looks like something that was built in the friend of a friend’s backyard, because it was. It’s sturdy, respectable, but also Dr. Seussian, and one of a kind.

Big Mike uses a pellet smoker. Instead of big chunks of wood, he uses tiny pellets of compressed wood; they look like hamster food. But it gives him a lot of leeway in the kind of pork he serves. He can use cherry, oak, pecan, mesquite, whatever he’d like. It’s different almost every day. He has your choice of sauces, too. The mustard sweet ginger hot sauce is popular. And he also has some regular hot sauce and something called Stupid Hot Sauce, which is what I ordered. And it was stupid — stupid good.

Big Mike once rented a stationary space in addition to the Red Barn. He shared it with a yuppie bar, but it just never felt like a proper joint. Though this is America and all, and we have the right to order a Manhattan with a smoked beef brisket, I’m not sure it’s what God intended. Mike promises me he’ll have a motionless place of his own soon, probably in Research Triangle Park or Cary, one where the silverware doesn’t come wrapped in a black napkin. 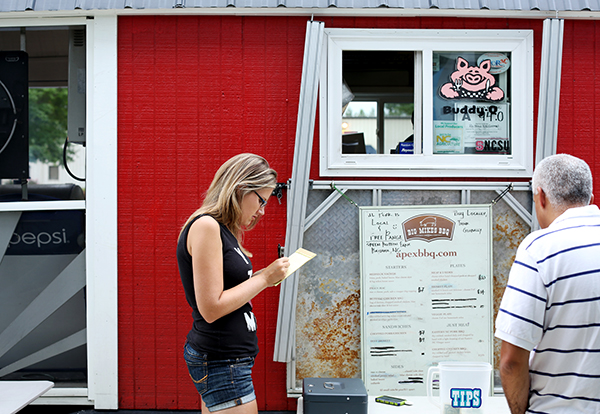 If you’re craving Big Mike’s barbecue, you need to know his schedule. He doesn’t just drive around, loudspeaker blaring to announce his arrival like an ice cream truck. He parks at office buildings, festivals, and food truck rodeos, where Christine Farrell jots down orders. Check social media outlets like Facebook and Twitter for updates about where to find Big Mike in the Triangle area. photograph by Travis Dove

Barbecue of the future
It has been well established in this column, and in documentation found on clay tablets in a pyramid, that barbecue joints have been around since just before the beginning of time, and most are still run by the family who started them. But the Big Mike’s Barbecue Story flies in the face of history — or drives past it. Mike has been out there a mere two and half years, which in barbecue time is not even half a second. It all seems so modern now, what with the way he uses Twitter and Facebook so his customers can know where he is, using a credit card attachment on his iPhone for payment. We’re watching history happen. Decades hence, Big Mike’s great-grandkids will be telling stories about the old-fashioned truck, before barbecue was delivered via drone. Big Mike’s is what the barbecue past will look like in 50 years.

Big Mike’s BBQ
bigmikesbbqnc.com
Check the website above for a schedule showing where to find Big Mike’s BBQ.