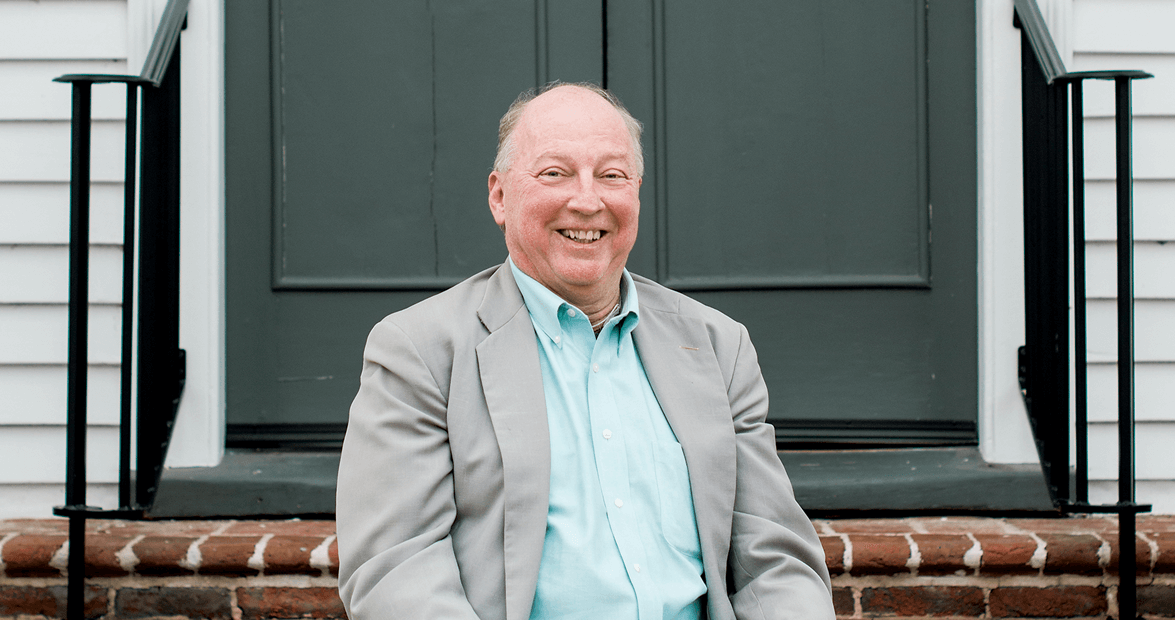 Editor’s note: This story was originally published in the April 2013 issue.

This past winter, I lost my 87-year-old father.

I went back home to New Bern to help see to details and to be with my family. In preparation for the funeral, my father’s pastor gathered my brothers and sisters and me together to reminisce as a way of helping him prepare a eulogy. Naturally our talk led to more general reflections about growing up when and where we did.

My siblings and I talked about being the children of a “mixed marriage,” with a Presbyterian father and a Roman Catholic mother. It was a big deal back then. My father’s family were members of the First Presbyterian Church. It meant the world to him. My mother’s family belonged to St. Paul’s Roman Catholic Church. She goes there still. The two churches were right across the street from each other. I’ve always thought it lucky that I grew up this way, to parents with two different doxologies, because it required a broad-mindedness that may have been unusual in the 1950s. Churches were more rivalrous then, I think. I’m afraid that my Catholic grandmother very much enjoyed that the Freewill Baptists right next door disapproved of the Easter cocktail brunches she threw in her garden while they were in church.

Our conversation with the pastor quickly turned to memories of food:

“Remember how we always had to eat crab stew outside because it was so messy?”

“Remember how we always went flounder gigging at least once a summer when we were at the cottage at Marshallberg?”

“Remember how Sally Pat’s cheese biscuits were always the best, but she would never give anyone the recipe?”

Then there was food and church. The Presbyterians had layer cakes. The Catholics had kibbe.

Both the Presbyterian and Catholic congregations have been in New Bern for a long time. The foundations of both are local, but the Catholics gained a significant number of outsiders during and right after World War II. The large military bases here brought people from all over the country to eastern North Carolina. Catholic churches were less common than Protestant ones, so St. Paul’s drew people from farther afield than one might have thought. It was at the Catholic church that I first met Italians and Poles. Names like Gennantonio and Vasiliauskas were found among the Joneses and the Smiths. Another reason for that congregation’s diversity was the large group of Syrian and Lebanese immigrants that began arriving in the late 1920s. They added Zaytouns and Karams to the roster. When I left New Bern for Chapel Hill in 1967, I also left mujaddara and stuffed cabbage leaves. At my new home in the ’60s, the food I’d grown up with was conspicuously absent, and I missed it.

So much time has passed, I don’t remember these times as clearly as I had imagined I would. But I still remember the food.

I remember that First Presbyterian and St. Paul’s had small yards and big fellowship halls, so events like lunches or spaghetti suppers were held indoors. For us, the full-blown covered-dish affairs were less common. Happily, there were other Presbyterians in town, and they had picnics. We had neighbors who went to the sister church. They had to go to Vacation Bible School; we didn’t.

One year, though, I was invited to attend the covered-dish lunch held on the final Friday of class. It was a pretty summer day, and we ate under a pitched awning on the church’s grounds. When I think back on this event, the first thing that comes to mind is cakes. There were so many. Wet, bright yellow coconut cakes and pink cakes colored with crushed strawberries or the juice of Maraschino cherries. I remember cakes that stood tall, each layer having been split and restacked, separated by layers of filling, which was different than the icing on top.

The filling and the icing. The differences complemented each other.

The Catholic side of the family had fantastic cooks, but no one had ever made anything like this.

Instead, kibbe was so prevalent in our circles as to not stand out except as maybe somebody’s specialty, like a seven-layered salad or sea-foam candy. Kibbe is a Lebanese recipe made from ground beef and cracked wheat. Sometimes it is baked in a sheet pan and served in squares; other times it’s shaped like hush puppies. We heard that at home it was sometimes eaten raw, but it was never brought to church that way. It contained the mysterious pine nut. You had to go to Raleigh to buy those. Every cook had her own version, like potato salad. My mother, who is not Lebanese, loves kibbe and complains that the next generation must not have learned how to make it because you hardly ever see it anymore. I have to bring it from a Middle Eastern restaurant here in Chapel Hill when I visit.

Churches in the country and in small towns still have big picnics. I hope they always will. I’m never in New Bern often enough to know about the ones there anymore. Here in Chapel Hill, you don’t see those church suppers as much. The A.M.E. Church across the street from Crook’s Corner has a fish fry fund-raiser a couple of times a year. It’s good, and I always buy tickets, but mostly people take the food away. Not many sit and eat. I bring it back to the guys in the kitchen for lunch. I believe that food makes up the better portion of our cultural history, and that our food traditions need to at least be remembered even if they can’t be continued. After all, at the table it is likely that people will agree about corn bread or fried chicken far more readily than they will about politics or basketball — or even religion.

Not surprisingly, after my father’s funeral, the Presbyterians came through again. We returned to the Sessions House to receive our friends, and there, members of the congregation had laid out a spread of deviled eggs, sandwiches, all manner of sweets, and punch. If you looked out of the windows on the Middle Street side of the room, you could see St. Paul’s Catholic Church through the trees.

I can’t tell you how many times I’ve instructed my staff to make something “like at a church picnic.” Never mind that often my cooks didn’t grow up around here and have no idea what that means. But it means a great deal to me. Church picnics are where good cooks go to really show off. Long before I became a chef, these picnics were where I learned to look for excellent food. They also meant bounty. You could go back for seconds and thirds for things you weren’t supposed to eat a lot of at home.

Every once in a while after I settled in as chef at Crook’s Corner in Chapel Hill, it would occur to me that since I am the boss, I could do whatever I wanted. This wasn’t always a great idea. (Catfish quenelles come to mind.)

Cold fried chicken, though. Now that was a great idea. I’ve always thought that one of the best things that can happen to you is to discover a drumstick wrapped in plastic in the refrigerator. I’ve always liked cold fried chicken because this is how you would find it at a picnic. So the lightbulb went off. No more worries about the occasional underdone thigh sent out to the dining room because the kitchen staff was in a rush, plus easy access to snacks in the walk-in refrigerator all the time. Cold fried chicken would become the centerpiece for a plate of hot-weather foods. So I put it on the menu.

There is some variation in the dish, of course, but generally I serve it with potato salad and deviled eggs. Often there will be cucumbers and onions in vinegar, but sometimes that becomes pole-bean vinaigrette. I’ve added an ear of grilled corn once in a while, but that’s gilding the lily. Always there is a tall wedge of watermelon that looks like a big, red sail as it passes through the dining room on the way to the table. It is the arrival of decent watermelons that launches the picnic plate each summer. I get asked all the time if I really serve cold fried chicken. I do. With pleasure. 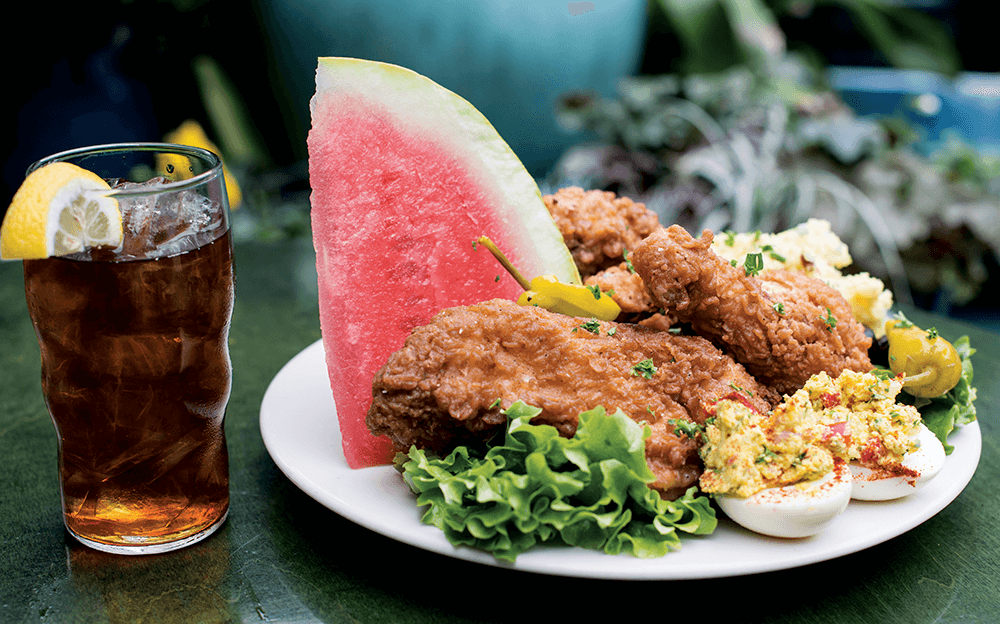