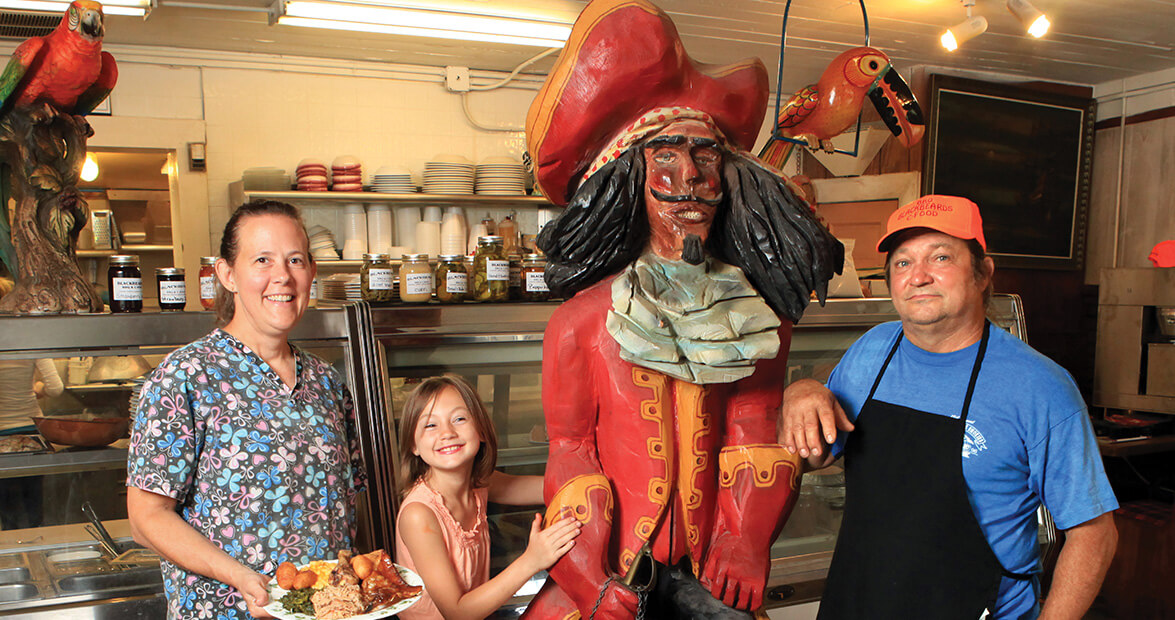 Halfway between Bethel and Tarboro, along one of America’s oldest highways, acres of farmland sprawl in almost every direction. This is tobacco country, sweet potato country, cotton country. Here, in the parking lot of a brick building, a shark prowls on the breeze. Its jaws are open, its body cocked as if going in for a kill.

Just look for the shark, the husband-and-wife owners of Blackbeard’s BBQ & C-Food will tell you. You can’t miss it.

Charissa Summerlin is Blackbeard’s chef. Her husband, Lewis, is the handyman, groundskeeper, and occasional busboy. Their daughter Abby is 9. She’s been helping out around the restaurant for years. Right now she’s trying to learn all the abbreviations for the menu items, which can be confusing: A barbecue sandwich is BBQS/S or BBQS/X, for example, depending on whether you want slaw or not. If you do, there’s an “M” for mayonnaise-based slaw or a “V” for vinegar.

In the corner of the restaurant’s cozy dining room, a 6-foot-tall, solid wood likeness of Blackbeard stands watch. Charissa and Lewis brought the shark and the pirate with them when they moved back to North Carolina from Florida 13 years ago. They bought an old country store on U.S. Highway 64 and spent two years building out, installing a kitchen, a counter, and some booths and tables indoors, and a wood-fed pig cooker and cookhouse out back. They hauled in the pirate and a parrot statue, hung up 100-year-old photographs of West Palm Beach and the Everglades. They flung paint across the gray floor like a Jackson Pollock painting and hoisted up the shark.

In 2000, they opened their little island paradise in the middle of tobacco country.

Lewis grew up a few miles from here on a farm in Old Sparta where, he says, they lived like people lived in the 1800s. His family raised corn and cotton and hogs and grew vegetables in a backyard garden. They fished in the creeks; trapped mink, muskrats, and raccoons; and had hog killings every fall. They’d barbecue in backyard pits they dug right into the ground.

In 1972, when Lewis was 17, he left home and headed to South Florida. He stayed there until 2000, building houses, working for a machinery manufacturer, and buying and selling restaurant equipment in West Palm Beach.

Lewis met Charissa when she started managing one of the restaurants he worked with. Charissa can’t remember a time when she didn’t enjoy cooking. It came easy to her. As a child growing up in Maryland, she made desserts and chocolates cast from candy molds. She trained at the prestigious Culinary Institute of America in New York City, worked as an executive sous-chef, peddled cupcakes and homemade pastas, and, for years, ran restaurants for other people. Through it all, she imagined having a place of her own, a place where she could make the rules and listen to the customers.

Their families were getting older. West Palm Beach was getting crowded. It wasn’t the paradise they once thought it to be. Lewis was ready to come home.

Place of their own

“I came back thinking it was going to be a little less work living in North Carolina,” Lewis says. “But it didn’t quite turn out that way.”

Running a restaurant isn’t all that easy. The hours are long and the work never really ends. There’s no such thing as a day off. Lewis chops the wood that Charissa feeds to the pig cooker from a woodpile on site. Charissa cans fruits and vegetables bought and bartered from local farms to serve through the winter months — preserves, creamed corn, tomatoes, and butter beans.

Business is unpredictable; calm often precedes a storm. Lewis and Charissa laugh about afternoons that pass with hardly a customer, only for the whole place to fill up suddenly with families caravanning from the beach or visitors from a nearby hunt club who have read about barbecue smoked to perfection, made-from-scratch sides, sweet iced tea, and deep-fried cornbread from Charissa’s own mix.

Or folks will get a hankering for herring, beef liver with gravy and onions, or sausage with dried lima beans — dishes they remember from their childhood but can’t find anywhere else. They come on tractors and pickups and SUVs with out-of-state plates. Every once in a while, a local shows up on a lawn mower or a horse.

People like what’s familiar. A farmer who showed up soon after Blackbeard’s opened saw salads listed on the big menu behind the counter and asked Charissa if she thought he was a rabbit.

Over the years, Charissa has made some changes to the menu. She’s also successfully introduced the same set-in-their-ways customers to her homemade soups by sending out samples.

Late on a slow Saturday afternoon, two customers linger before the supper rush. Roger Davenport, a retired farmer from Bethel, has been here most of the day. He comes for the seafood and the company. He likes the variety of both.

“I hang around here as long as it’s not busy,” he says. “I run into a whole lot of people I know.”

He leans back in his chair and looks over the counter. “Hey, Charissa. You got any samples?”