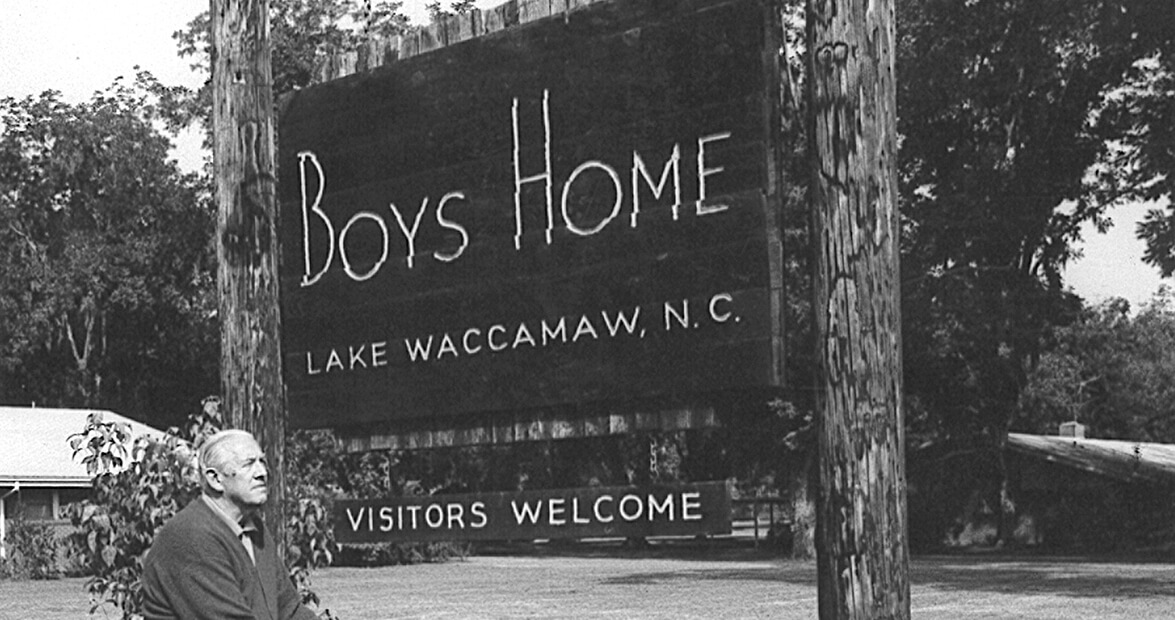 Connecting a funeral home director to children in dire circumstances would seem a stretch. As the former, A.D. Peacock of Whiteville often buried mothers, fathers, or both. One hard-frost October evening in 1954, Peacock delivered a body to a home and found seven children between the ages of 4 and 12 in one bed, sleeping beneath burlap bags, with no wood for the stove, no food to cook were the stove even lit, and no father in sight. Peacock knew he had to do something, and he made a mental business plan on the drive home. Whiteville businessmen responded.

What’s known today as the Boys & Girls Homes of North Carolina (B&GH) began in a beautiful shingled house mere feet from a lapping lake. Originally built in 1926 by a Lake Waccamaw lumber family, whose patriarch handpicked every board that went into the hardwood floors, the house was empty, and available, by 1954.

Tom Simmons arrived at the Boys Home in 1958, when, he says, he was “12 acting like I was 30.” He remembers one day when B&GH director Reuben “Rube” McCray “pulled up a piece of corner carpet and said, ‘Boys, I’ve got a project for you.’ We brought this floor back to life.”

Simmons’s home life was so abusive that he had resorted to sleeping beneath a fountain overhang in downtown Wilmington. A social worker took him to the Boys Home, asking that they simply try to get him through high school, the most anyone could hope for. Simmons warned that he’d be gone in a week, because McCray would want him gone. Not only did Simmons ultimately graduate from high school in Hallsboro, where the boys attended school, but he also earned a master’s degree and a doctorate in education. For the past 25 years, Simmons has been recognized as one of the foremost educators in eastern North Carolina. He left the B&GH Board of Directors, in fact, and came out of retirement to become the director of Flemington Academy, a charter school now located on the B&GH campus.

And what kept that abused, angry kid at B&GH longer than a week? The first night he went to bed, his roommate asked, “Aren’t you going to take off your clothes?” No, Simmons replied, he wasn’t. “You ain’t got any drawers, have you?” the roommate correctly guessed, and then crossed the room, opened his chest, and shared a pair of his own. That did it, Simmons says. No one had ever shared with him before, much less given him anything. Ever.

Bill Thompson, involved with B&GH for 37 years and counting, and president from 2003 to 2007, still speaks of Rube McCray with respect. “Mr. McCray’s basic idea was to take boys who needed a physical place where they could be safe,” he says, “and where they could feel like they were wanted and needed and loved. Then, educate them.” 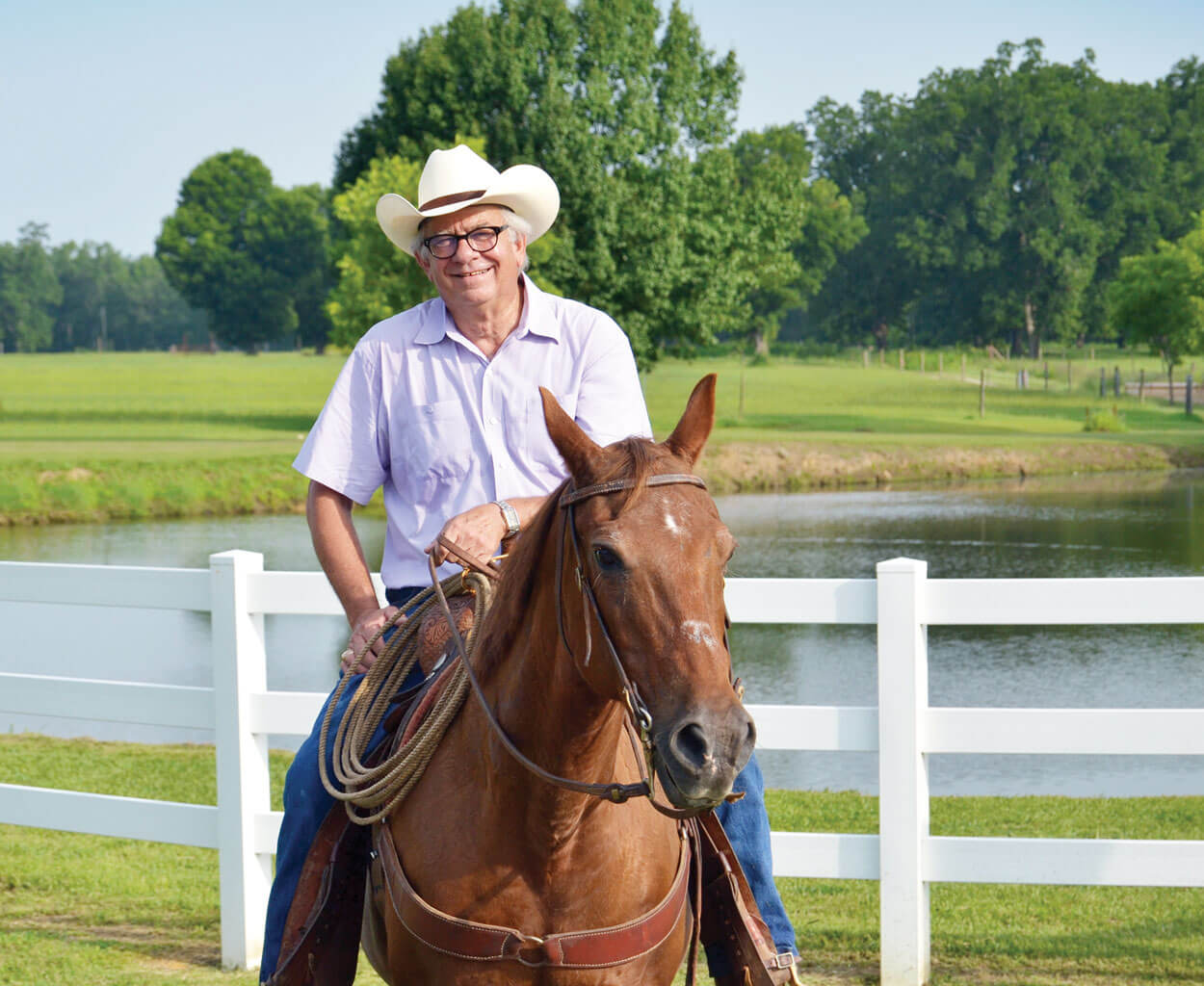 But education isn’t restricted to a classroom. B&GH had a farm, and the residents raised hogs, cows, and vegetables, often displaying them in 4-H competitions and fairs, or selling them at their country store. Today, students work with horses; they begin with brushing and feeding, and eventually work up to riding. It’s the first time many of the kids have had control of anything, says Thompson. “If they pull the reins on that horse and he goes in that direction, that’s the first time anything has gone their way in their whole life.”

The home holds a job fair, where students apply for various types of paid employment, from feeding the cows to working in the dorms. And every resident is involved in what’s called World of Work. At home, the task would be called chores.

“We want to program them for success,” says Gary Faircloth, the current B&GH president and CEO, who’s also a product of the program. He was 3 when his father left. By 15, Faircloth was living with his mother — on her $87 monthly welfare check — in a one-room house with no plumbing or heat. “I was a street kid,” he says. “Had been picked up for shoplifting things like shoes, missed 110 days of school.” Due to orphanage age-cutoff laws, he and his brother, Ron, had been separated, so Faircloth went to visit him at B&GH. There, he saw what Ron had accomplished. He saw “cottages [that] looked like mansions.” At the end of a visit, he asked to stay, as had been his intent all along. “I’m probably the only kid who’s actually ever run away from home to come here,” Faircloth says.

Although the majority of the children need to learn a trade, B&GH has had a higher education program since at least 1966, which ensures that every child, if they have the ability and desire, can go to college. Of the nine graduates in 2015, five went on to further education. They will graduate without any debt.

Faircloth took advantage of that program, graduating from East Carolina University in 1972. “To come from nothing and be given this?” he says with wonder.

“If they pull the reins on that horse and he goes in that direction, that’s the first time anything has gone their way in their whole life.”

In earlier days, B&GH would get a call from a school, a church, a family — anywhere anyone saw a child who was being abused or neglected or needed help. “A.D. Peacock would just go out to the house and bring them in,” Thompson says. Kids could come to B&GH as young as age 10. Most of the residents today are teens from “horrendous home situations,” referred by the Department of Social Services, and B&GH cares for 55 to 65 children at a time — though the need for space is much greater.

Do they ever despair? No one hesitates with an answer.

“It’s not a story about us. It’s a story about this place,” Faircloth says, “that gives kids a chance and an opportunity they wouldn’t otherwise have.”

Those kids don’t forget who helped them. In a breaking voice, Thompson tells the story of a student who biked the 13 miles over to Whiteville, pawned his bicycle, and bought a bus ticket to attend the funeral in Tennessee of a B&GH director who’d changed his life. “Everything here is personal,” he says.

“We don’t give up on someone,” Faircloth says. The students, and those who care for them, strive, fail, try again, and keep reaching for success. Citizenship is so often equated with serving one’s country. Surely protecting, educating, and reclaiming those who cannot help themselves belong in that definition, too.