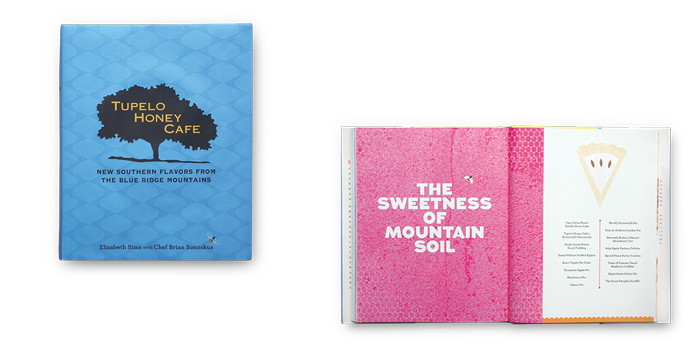 Before Brian Sonoskus became a chef, he was a kid who felt at home in a kitchen. He noticed how, when his family gathered there in the presence of food, everyone relaxed. Conversations became lighter and more sincere. Divisions dissolved over a deep-dish pie.

Sonoskus says that after he finished culinary school, he spent several years wandering, searching for the right place to settle down and start a career. He was looking for the kitchen that felt as welcoming and open as the one he remembered from his childhood.

When Sonoskus moved to Asheville in 1995, he worked at a handful of restaurants before becoming the executive chef at a spot called Tupelo Honey Cafe downtown. He fell in love with the city and the restaurant. He’d found the right fit.

“It’s a compilation of about 10 years of the restaurant’s recipes and specials,” Sonoskus says.

The recipes in the cookbook are tailored to the home cook. Because, although Tupelo Honey bakes hundreds of its fluffy buttermilk biscuits every day, unless you’re training for a biscuit-eating competition, you shouldn’t need to make as many. Click here to find the recipe for those biscuits.

But first, what about their strawberry tart?

As a boy, Sonoskus learned how to make strawberry jam from his grandmother. In her kitchen, the two of them mashed berries and boiled them in sugar in a pot on a stove. Sonoskus remembered that experience years later in his own kitchen at Tupelo Honey and created the tart. Introduce it in your kitchen and watch your family gather.

You can order Tupelo Honey Cafe: New Southern Flavors From the Blue Ridge Mountains at bookstores nationwide, at the restaurant, and online here.
print it